Problems and gaps remain, as does costly bias to Vivitrol

Ohio has increased the number of counties where some form of medication-assisted treatment (MAT) is available to people trying to stop using heroin and other opioids, reports the Ohio Department of Mental Health and Addiction Services.

However, significant gaps in access to MAT remain, especially in rural areas and in access to methadone, the least expensive and most often effective therapy.

Three medicines are approved to treat people dependent on opioids:

In Ohio, Vivitrol, which is manufactured here in a government-subsidized factory, is the most available drug, as this chart shows.

Ohio’s government has done a solid job overall in improving access to MAT. The state has used money from the abundant federal opioid response grants to, for example, increase the number of doctors who have special permission (required by federal law) to prescribe drugs for opioid dependence.

All three MAT drugs have been shown to help patients more than traditional abstinence-based treatments.  However, none of the three approved medicines work for all people all of the time.  In terms of effectiveness, the three medicines are roughly the same in preventing short-term “relapse,” i.e., a person using black market opioids again.

But using broader measures of well-being and survival over the longer-term, Vivitrol has the weakest record and is most expensive — yet it is the drug that Ohio favors. Why is that? 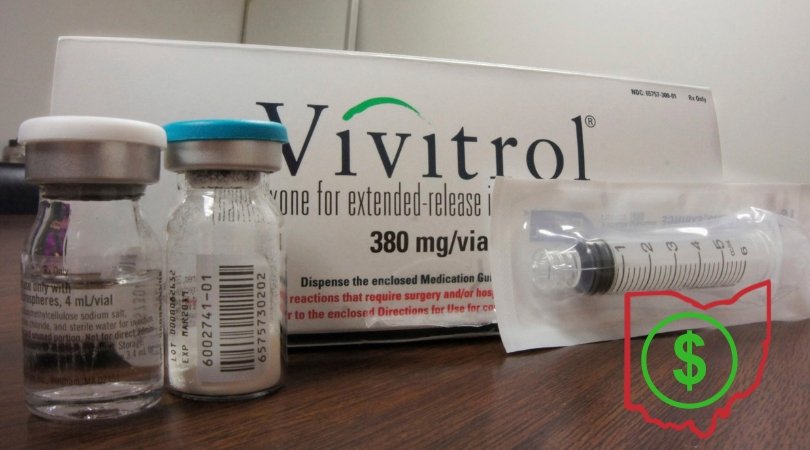 Methadone and buprenorphine have been shown to reduce overdose death long-term. (Methadone gets somewhat better results.)

Vivitrol has not been shown to reduce overdose death long-term — or even to reduce opioid use long-term. Some preliminary indications are that Vivitrol could increase overdose death because, as an opioid-blocking drug (think Narcan injection), it causes forced abstinence from opioids, which reduces tolerance and increases overdose risk.  If a person stops taking the $1,000+ per month Vivitrol, the risk of a fatal overdose to someone who relapses is likely elevated — although no study has been done on this obvious question.

Further, Vivitrol has played a role in shifting Ohioans who use drugs from opioids to methamphetamines and benzodiazepines (Valium, Xanex), which have their own risks. So essentially nothing is known about whether, in the real world, Vivitrol saves lives, increases death or has no effect.

Vivitrol plays into the moral beliefs, rather than scientific ones, that many have about drugs. It chemically forces abstinence for about 30 days after it’s injected. For people who believe “stop using now” is the only measure of success, it’s a wonder drug. But for those trying to save lives, improve lives or even reduce problematic drug use, Vivitrol is an example of shooting ay a blurry target while blindfolded.

What Vivitrol does have going for it is money. Ohio’s Medicaid program (i.e., taxpayers) paid about $1,200 per monthly shot of Vivitrol in 2017.

Alkermes, its manufacturer, has been a generous campaign contributor, especially to Ohio politicians at the state and federal level. In addition, Alkermes has pumped money into Ohio drug courts to promote the drug’s coerced use. The company also has received generous state and local tax breaks to expand its 500-employee Vivitrol factory in Wilmington, Ohio. (Ohio produces all the Vivitrol used in North America and many other parts of the world.)

Vivitrol is a valuable drug and people should have access to it. However, Ohio’s bias in favor of the most expensive, least-proven form of MAT is a response to money, not science or patient needs. 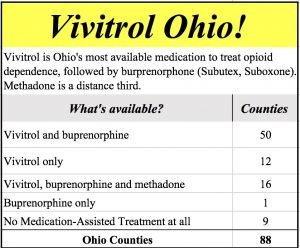 The next chart shows this information in more detailed form, adding the level of increase from January of this year until October 15, 2018, fr each drug. It shows the pace of increased accessibility for each drug.

Lastly, this map visually illustrates the distribution of MAT options in each of Ohio’s 88 counties. Ignore the X‘s on the map. The X indicates counties that don’t have drug courts — an interesting fact but not relevant for this analysis.