Carfentanil caused a tsunami of overdose death in Ohio, CDC reports. (But, bizarrely, not in other states.) Why? 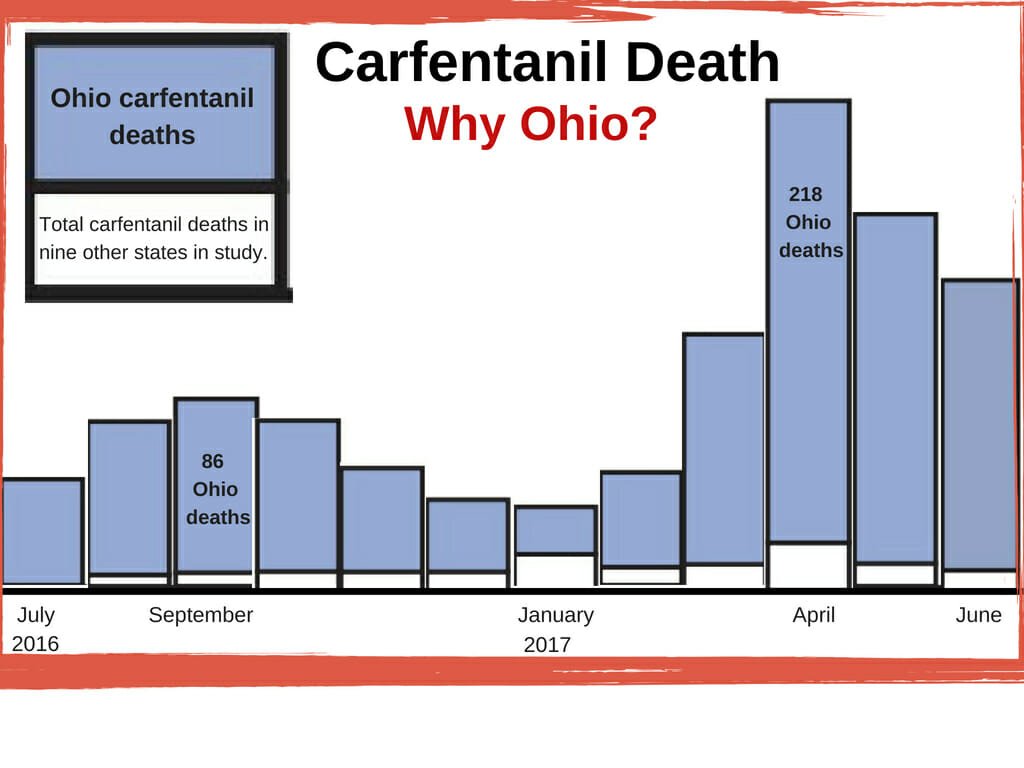 A new Centers for Disease Control report confirms what Harm Reduction Ohio reported in May: the sudden entrance and quick expansion of the highly potent opioid carfentanil into Ohio’s illegal drug supply caused a mass wave of overdose death in Ohio.

In May, Harm Reduction Ohio used data from drugs confiscated by law enforcement throughout Ohio and tested at the state’s three crime labs to link carfentanil to a sharp increase in overdose deaths statewide from July 2016 to June 2017. In two earlier analyses, HRO used local drug seizure data to link carfentanil to a death spike in the Dayton area and a yearlong increase in death in the Cleveland area 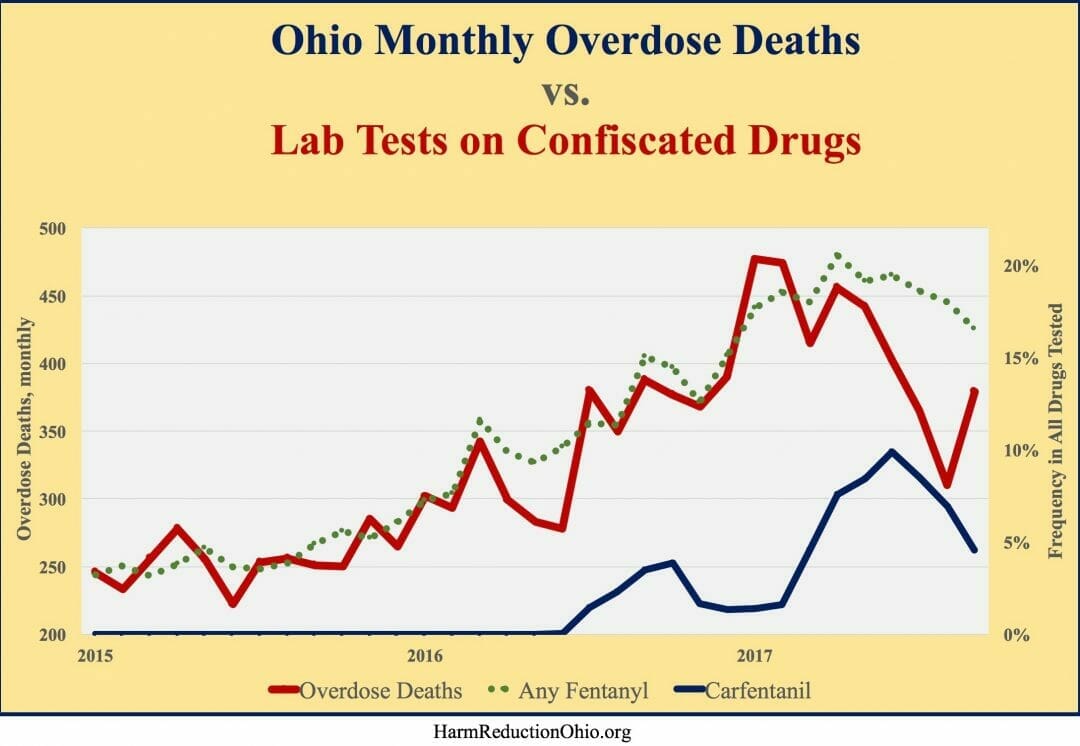 HRO estimated about 1,000 Ohioans died from carfentanil’s sudden emergence into the illegal drug supply, especially in the cocaine and methamphetamine supply. The new CDC study confirms those findings by examining which fentanyl analogs were in the blood of deceased overdose victims.

The CDC made another disturbing finding: of the 10 states in the study, only Ohio suffered a mass wave of carfentanil death. The CDC does not speculate why carfentanil hit Ohio so hard — but not other states. HRO doesn’t have a good reasons, either. Meanwhile, state officials have shown no awareness that carfentanil — not drug use levels — was driving overdose death to a new level.

Carfentanil is dangerous because it is active in tiny amounts, much less than fentanyl or its other analogs. This makes it impossible for sellers or users to create accurate doses in the illegal marketplace. Even slightly inaccurate carfentanil doses can be fatal, especially when the drug is mixed with cocaine or meth and used by people with little opioid tolerance.

The carfentanil study was published in the July 13 issue of the CDC’s Morbidity and Mortality Weekly Report.

“Ohio reported the largest numbers and most substantial increases in deaths with any fentanyl analog detected, including carfentanil,” reported a team led by CDC epidemiologist Julie O’Donnell, a lieutenant in the U.S. Public Health Service.

The CDC found carfentanil deaths in Ohio reached an early peak of 86 in September, declined for several months, than hit a peak of 218 deaths in April 2017. The up-down-up pattern of overdose deaths mirrors the pattern found in drugs confiscated and tested by the Ohio Bureau of Criminal Investigations crime labs. (Shown at bottom of article.) 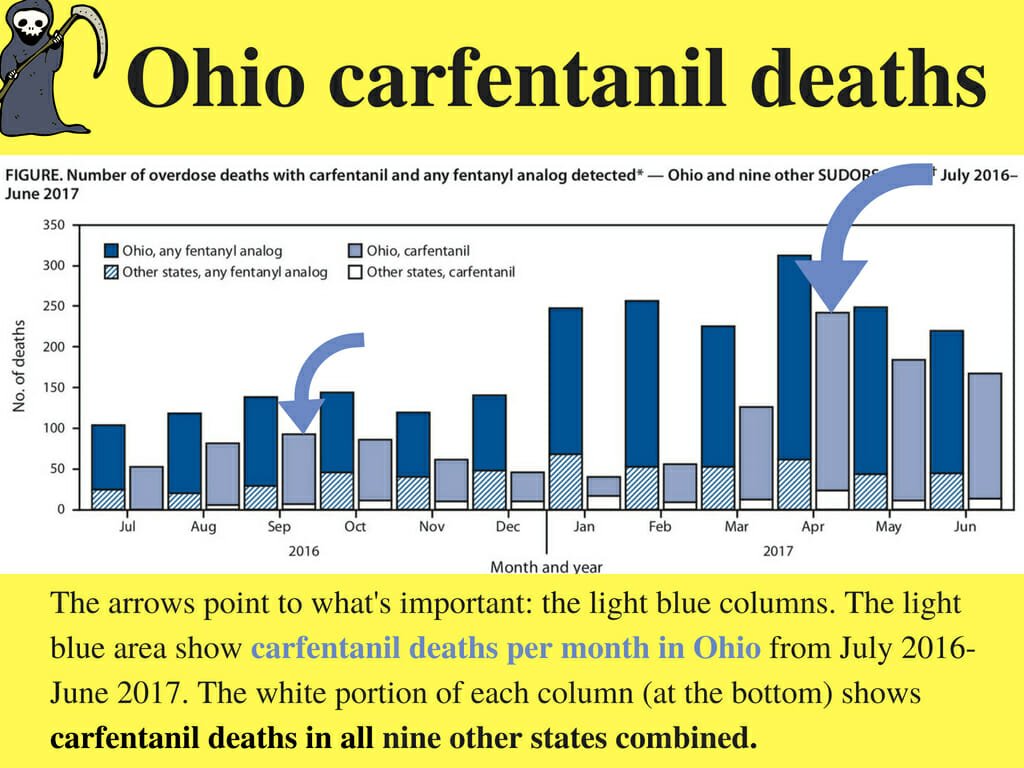 The chart at the top of the story is a simplified version of this larger chart, the original published in the CDC study.

The CDC report is part of a deep analysis that the CDC is conducting to better understand how, where and why fentanyl and its analogs are causing so many overdose deaths. A similar level of analysis will be applied later 32 states and the District of Columbia. The CDC is paying these jurisdictions to itemize the fentanyl analogs found in overdose victims rather than just report general information.

What it means for Ohio

The CDC report comes as local authorities in Ohio are now taking credit for a decline in overdose deaths during the second half of 2017. (See stories here and here, for example.) In reality, they had nothing to do it with it. The actual reason was the presence of carfentanil declined during that period. Nobody knows why.

The rise and fall in fall in overdose death is almost entirely a function of the chemical composition of the illegal drug supply. Changes in levels of drug use — the current focus on the federal and state response — is a minor factor in death levels. What’s driving death is the danger level of contaminated and adulterated prohibited drugs, not the use level.

That’s why the crackdown on prescription opioids caused an increase in deaths even though total opioid use declined. Drug users, albeit fewer, were pushed into harm’s way — into illegal, unregulated drug markets that contain contaminated, adulterated, poorly mixed and falsely labeled drugs of uncertain doses.

Drug seizure data is an epidemiological measure of danger levels in the illegal drug marketplace. It deserves maximum attention. It is more important than drug use surveys when understanding overdose death and other public health harms caused by bad regulatory policy.

What crime labs find in confiscated drugs — the state crime labs have tested 150,000 seized drugs since January 1, 2015 — help explain why overdose death rises and falls in Ohio. The effect on danger is especially clear when a new commodity or adulterant enters the marketplace and causes a significant change in drug users survival.

The progression of opioids from milder to intense forms — opium to morphine to heroin to fentanyl to carfentanil — illustrates how drug prohibition drives death by pushing the marketplace to tiny, potent commodities  that are valuable not for reason of consumer preference but because they’re easy to hide from detection.

The crackdown on prescription drugs got heroin. Heroin enforcement brought fentanyl. The pursuit of fentanyl brought carfentanil. Ohio’s overdose epidemic is, at its heart, an economic phenomenon, not a medical or law enforcement one.

Our government’s current response to overdose death is to focus on “use” and “users,” a strategy of blaming deaths on a stigmatized population, especially the stigmatized heroin addict junkie. This pushes our focus away from bad policy: Why is a supply of consumer goods so contaminated in killed 4,800 Ohioans in 2017?

Drug — everything, legal and illegal, from aspirin to heroin to Zoloft.

Poisoning — a harmful effect caused by a drug. The cause can be taking too much or too little, taking the wrong drug or using the wrong  of administration, or having an allergic reaction.

The United States has tens of millions of active users of illegal drugs. Ohio has nearly two million. This is a large minority of Americans who should not be stereotyped, trivialized or judged morally inferior for what they consume. They are a diverse group of beautiful people who are being pushed into harm’s way.

It’s time for us to give drug peace a chance. The lives of tens of thousands are depending on it in this year alone.

What does the future hold?

Drug seizure data shows carfentanil’s presence in Ohio’s illegal drug supply fell sharply in the second half of 2017 but increase slightly in early 2018.

This chart shows the share of all drug’s tested that contained carfentanil. 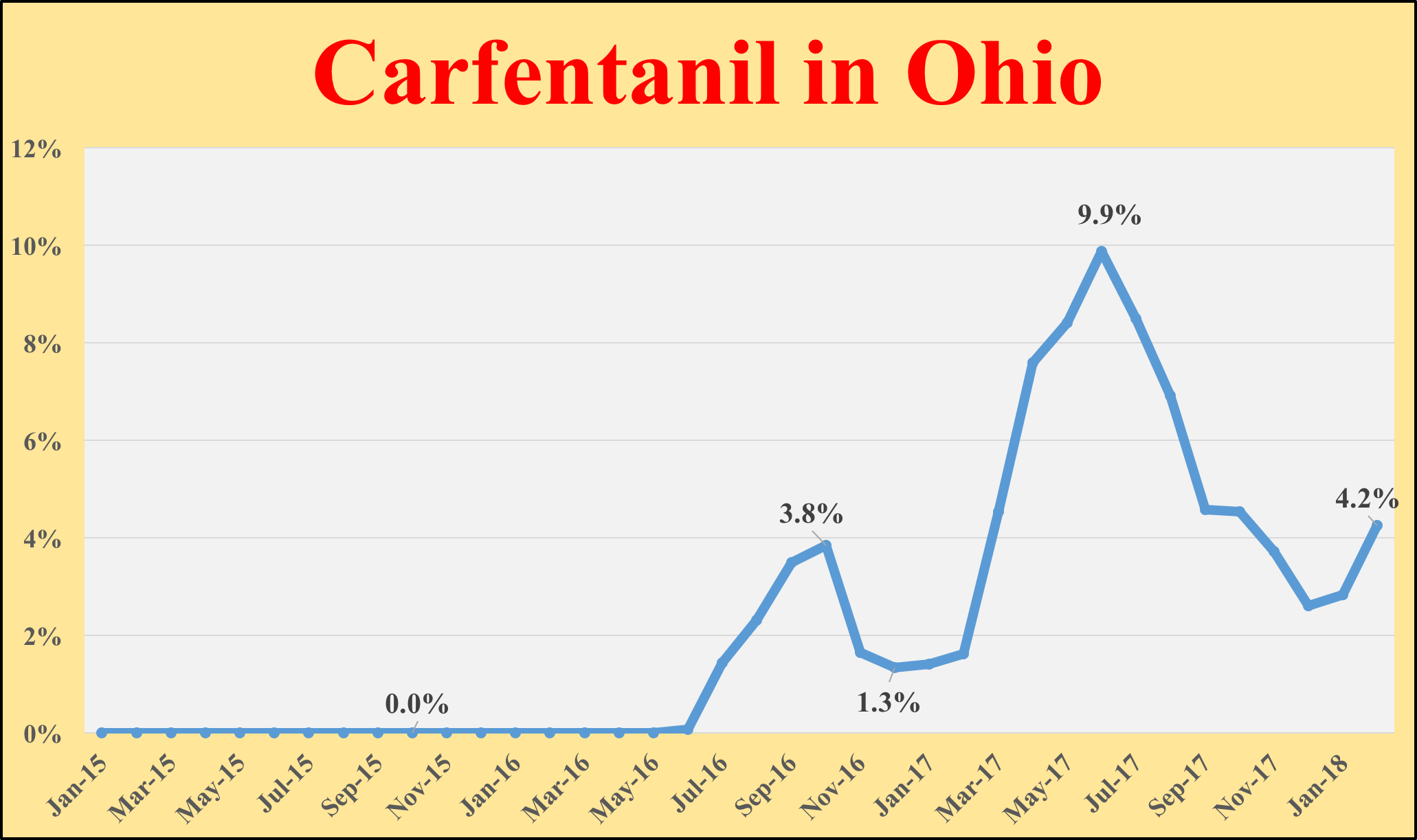 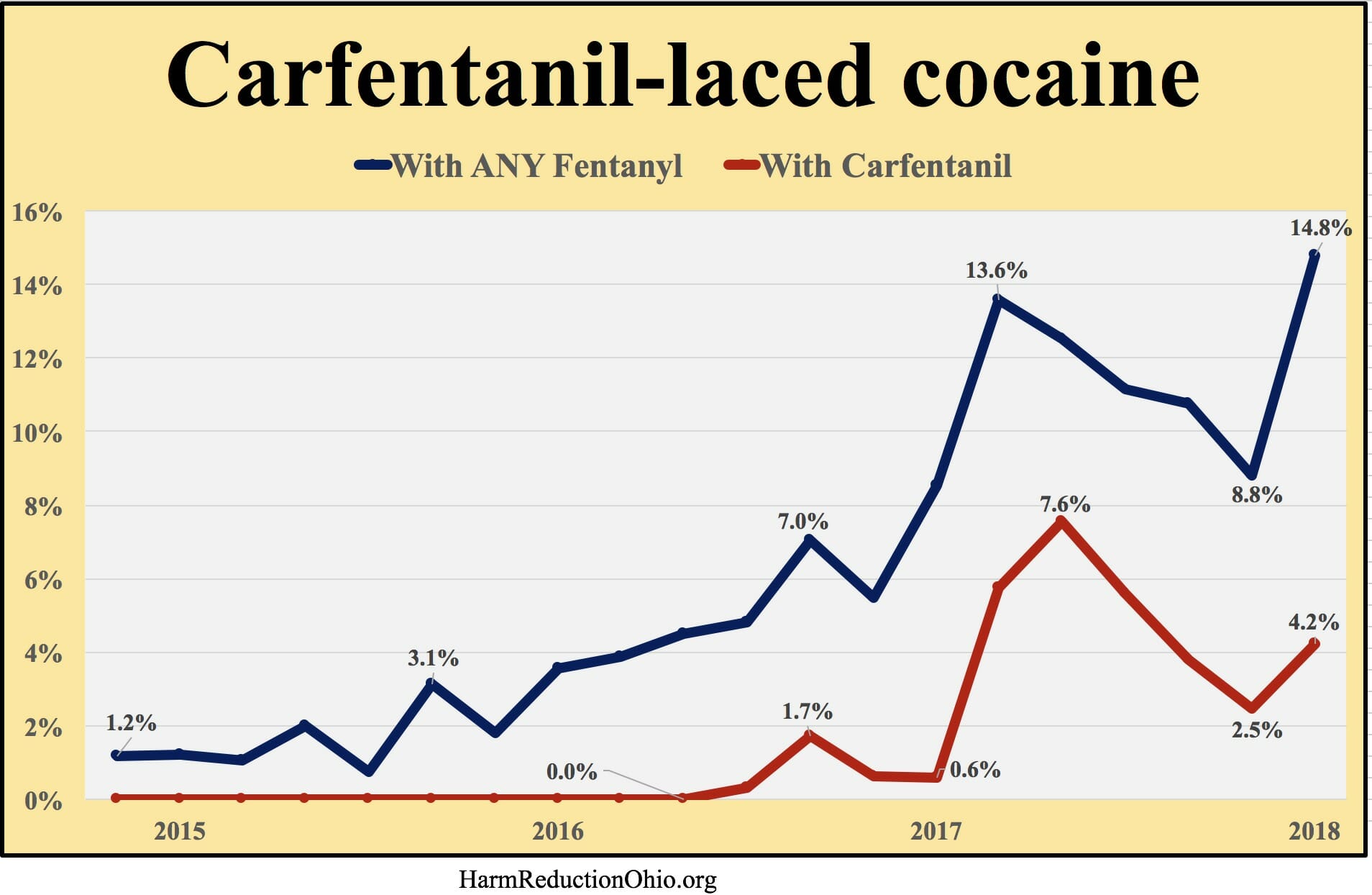