Next question: How much will Ohio’s syringe programs get? 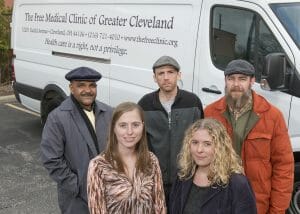 The Cleveland syringe exchange is the state’s oldest, in operation since 1995.

In a July 24th letter, the CDC said: “Based on the data presented, CDC concurs with the Ohio Department of Health (ODOH) that there is a statewide need for SSPs (syringe service programs). ODOH provided compelling evidence of year-to-year increases in HIV infections attributed to injection drug use (IDU) in the state of Ohio.”

The state is eligible to immediately direct federal funds to Ohio’s cash-strapped syringe programs, the letter said, but the health department is likely to go through the grant cycle now underway and start contributing late this year or in 2019.

Ohio has 14 syringe programs operating in 16 counties at 21 locations. (See map.) The state contributes no money to the local programs but cleared the way for federal funds to flow to the locally operated programs. The state had previously declined to make the request.

Syringe programs, also called needle exchanges, provide sterile needles and syringes to intravenous drug users to prevent the sharing of dirty needs and the spreading of infectious diseases. The programs have been shown to be effective at reducing transmission of HIV and hepatitis as well as reducing overdose death and getting IV drug users to enter treatment.

The five states bordering Ohio had all made the request for federal funds in 2016, when Congress made it available. However, Ohio declined to do so until Ohio Department of Health Director Lance Himes made the required request to the CDC on July 4. The CDC had 30 days to review the request but quickly gave Ohio the thumbs up.

Ohio receives about $6.5 million a year in federal HIV prevention funds. This is the main federal  pool of money that can be used for the programs.  The state will influence how much the programs get by how it writes grant rules. At least $2 million is expected to go to the programs.