Cleveland’s syringe exchange program is having early success in a program to supply fentanyl test strips to heroin users. The inexpensive strips let users identify when their drug mixtures contain fentanyl, carfentanil and other analogues.

The syringe exchange, run by Cleveland’s free medical clinic, distributed 500 fentanyl test strips in a pilot program. Based on surveys, heroin users reported taking smaller doses or test doses to reduce the possibility of overdoses when fentanyl was confirmed in a drug mixture.

Heroin users who used the fentanyl test strips had fewer overdoses than those who did not get them, although the difference was not enormous, says Lisa Michelle Fair, the health clinic’s associate director for HIV Prevention and Outreach.

The use of fentanyl test strips started in New York and Vancouver and has spread to other cities. Cleveland is the first Ohio city to distribute the test strips, although Dayton and Columbus have considered it.

In the pilot program, heroin users were given three test strips and asked to report on what each one found. 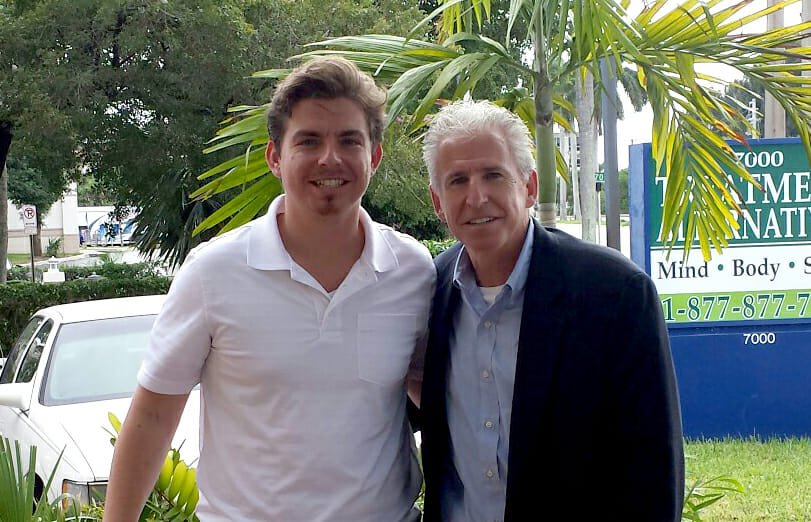 Greg McNeil with his son, Sam, who died of an overdose.

Greg McNeil, who lost his son to an overdose in October 2015, proposed the idea and donated the 500 test strips for the pilot program. McNeil has become an activist in overdose prevention since his son Sam’s death. McNeil’s non-profit Cover2 Resources helps opioid addicts get treatment, and he hosts a podcast — 160 podcast episodes so far, including one on fentanyl test strips — in which he talks to doctors and policymakers about drug policy.

The fentanyl test strips cost $1 each and are purchased from BTNX Inc., a Toronto biotechnology company that makes a wide range of diagnostic products. The test strips are immunoassay tests that work on the same principle as pregnancy tests and urine tests for drugs.

The tests have been confirmed to also identify the presence of carfentanil and six other fentanyl analogues. In the test, one red line appears if fentanyl or an analogue is present, even in minuscule amounts. If the drug mixture is fentanyl-free, two red lines appear.

The goal is to give drug users information about the purity of their drugs. Even though fentanyl increases the risk of overdose because it is active in very small amounts, opioid users still use the drug when fentanyl is confirmed. Many even prefer it because of its potency.

“In the mind of an addict, even when a person overdoses they will still want the drug, thinking that the person just did it wrong or didn’t have enough (opioid) tolerance,” Fair says.

Fentanyl test strips are just another tool to reduce overdose risk; they aren’t a cure-all. This video shows how they work.