This story has been supplanted by superior data. The data provided by the Ohio Bureau of Criminal Investigation was the best (and only) available at the time. However, it lumped all drugs confiscated at the same time, rather than only drugs actually mixed together. This story on a DEA analysis provides more numbers based on a better data set, as will a future story on Dayton area drug seizures.

The presence of fentanyl, carfentanil and other variants in cocaine and meth is driving another acceleration of drug overdose deaths in Ohio. The overdose death toll has grown from 3,050 in 2015 to 4,050 in 2016 and to an estimated 5,000 in 2017. Cocaine-fentanyl is now the No. 1 combination found in victims’ blood.

Ohio drug seizure lab test results, obtained from the state crime lab in a public records request, had not been previously reported. The drug seizure data match the kind of drug combinations now being found in autopsies and raise the question of whether the state could have prevented overdose deaths by releasing this information earlier to warn that fentanyl has spread beyond heroin.

Harm Reduction Ohio’s analysis of the data show that ultra-potent carfentanil is playing a large role in cocaine-fentanyl deaths. It was found in 37% of the cases with cocaine and fentanyl, far more often than the drug is found with heroin.

The jump in meth-fentanyl found in drug seizures is likely causing an increase in deaths of meth users, although statewide autopsy results for this drug won’t be available until this summer.  Cocaine deaths are kept largely up-to-date in the state mortality data, which alerted Harm Reduction Ohio to the remarkable shift in who’s dying of drug overdoses in Ohio. 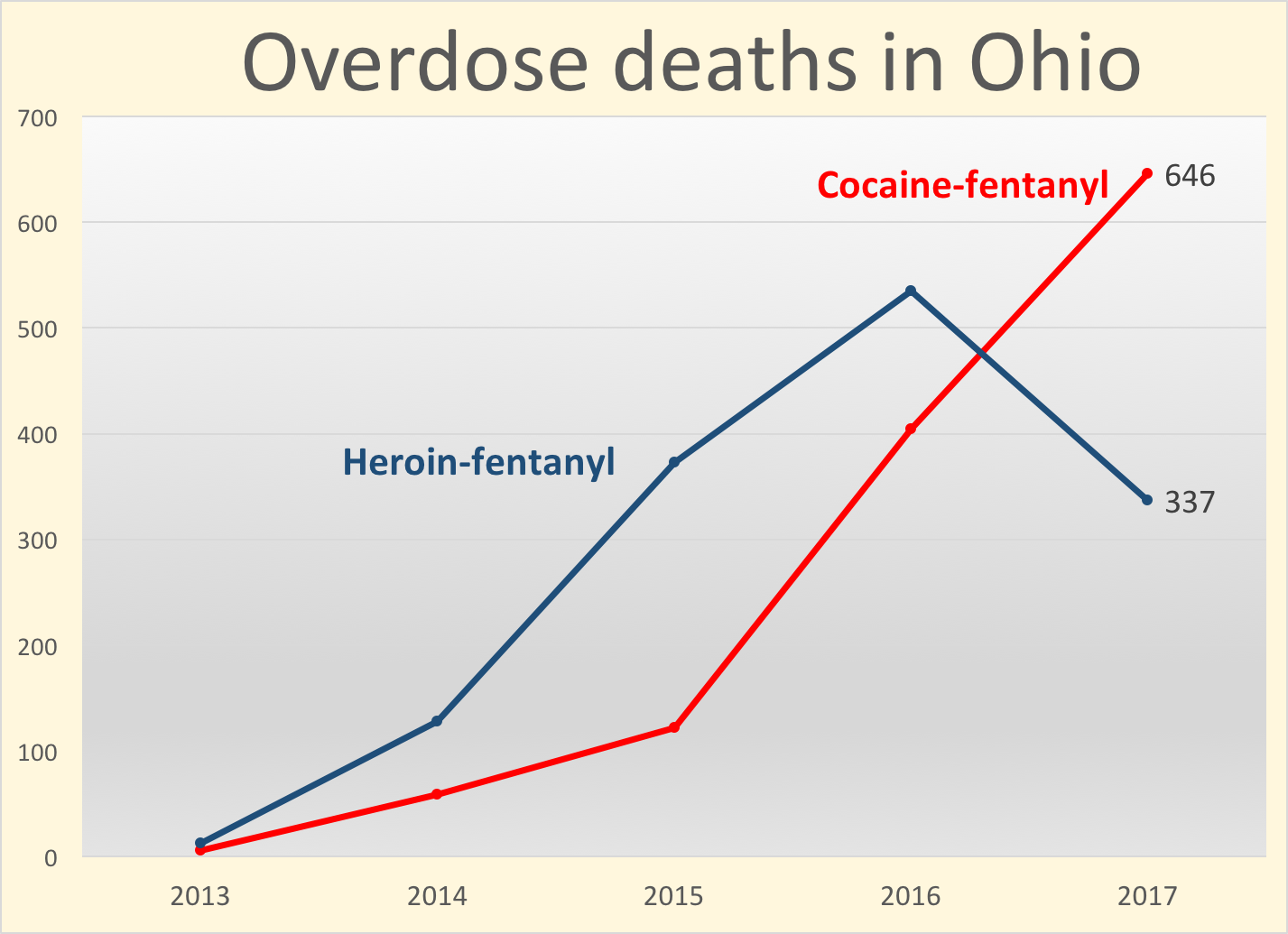 Fentanyl: What are the odds?

The Ohio Bureau of Criminal Investigations, which operates three labs that analyze drug seizures, supplied the results of all cases in which multiple drugs were found in lab tests. BCI did not provide cases in which only one drug was seized. The data supplied also includes an unspecified number of cases when the drugs were found in the same seizure but not combined together.

Despite those data imperfections, what BCI provided is the first substantive look the public has had at the chemical composition of Ohio’s illegal drug supply, increasingly contaminated by fentanyl and its chemical relatives.  The data supplied was the basis of Ohio Attorney General Mike DeWine’s news release in December reporting dramatic increases in state crime labs finding fentanyl or an analogue in drug seizures.

However, DeWine talked only about fentanyl and did not mention how the drugs it was found with had shifted dramatically to cocaine and meth, which are used more widely than heroin. Some heroin users have switched to meth to reduce overdose risk, unaware that fentanyl is now prevalent in that drug as well.

The following charts show what state crime labs found in drug combinations involving heroin, cocaine and methamphetamine. The data show a significant shift away from fentanyl and to fentanyl analogues, some of which are more potent and some less,  but about which much less is known.

The type of fentanyl being found is changing, away from ordinary fentanyl to carfentanil, furanyl fentanyl and acryl fentanyl. 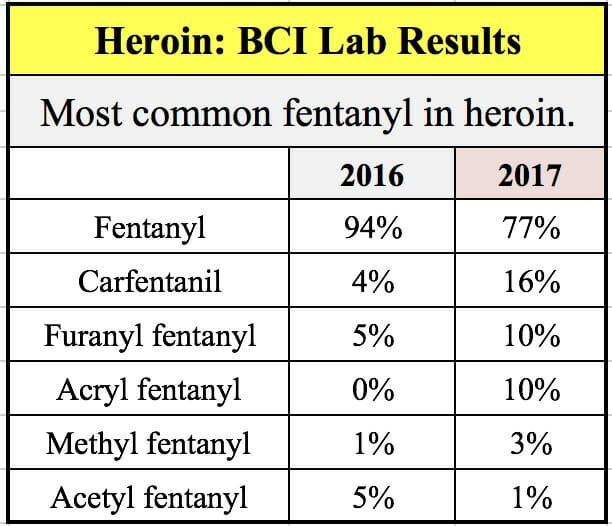 Note: The numbers add up to more than 100% because some seizures included more than one type of fentanyl. 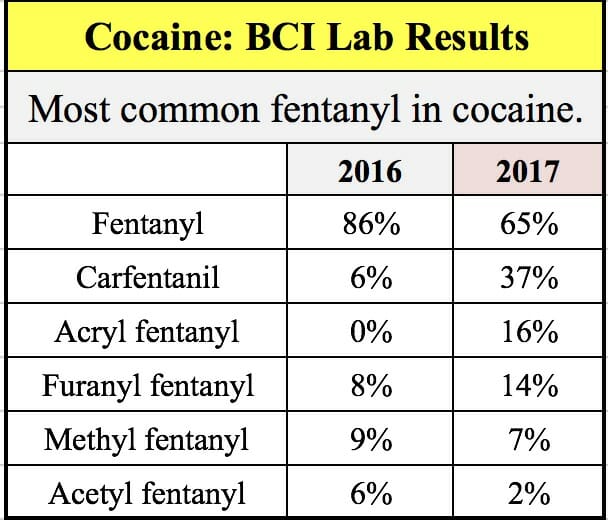 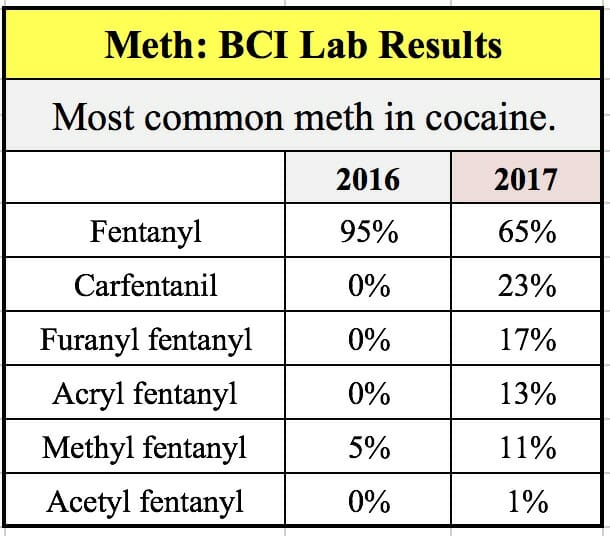 The state has said it is studying whether to issue a public warning on fentanyl-laced cocaine. So far, only the Columbus Department of Health has done so, as have cities elsewhere in the country.

Cocaine and meth users are especially vulnerable to fentanyl overdose death because, unlike heroin users, most have no tolerance to opioids. Much smaller amounts of the drug can kill them. Also, Ohio’s naloxone access efforts have tried to reach settings where opioid use occurs but have made no similar push to places where cocaine-fentanyl and meth-fentanyl overdoses can happen.

Meth is used mostly in small towns and rural areas. Powder cocaine tends to be used by whites, often affluent and educated, while crack cocaine is mostly used by older African Americans in cities. Fentanyl can be deadly when smoked, snorted or injected in a drug mixture.

About 200,000 Ohio residents used cocaine or meth last year versus about 40,000 heroin users, according to the federal government’s drug use survey.