DEA Heroin Signature Report, 2017: What it means for users

All heroin is not the same.

Black tar heroin is almost never adulterated with fentanyl when smuggled into the United States. A newly released DEA report found that only one of 486 samples (0.2%) of black tar heroin produced in Mexico and tested at DEA labs had fentanyl or a fentanyl analog in it.

For powdered heroin produced in Mexico, 26 of 385 samples (6.8%) contained fentanyl or an analog.

The most important thing to note is that fentanyl-adulterated heroin is rare when it crosses the border. The reality is that nearly all adulteration is done  in the USA, after the drugs have crossed the border. Adulteration is a state and local phenomenon. The idea that evil Mexican cartels are targeting Ohio for fentanyl-laced heroin, cocaine and meth is a myth.

Overall, only about three percent of heroin coming into the U.S. has fentanyl or an analog in it. By the time these drugs reach Ohio consumers, about three-fourths of heroin contains fentanyl or a fentanyl analog. The unappreciated problem is that multiple levels of the supply chain keep adding fentanyl and analogs to increase potency of powdered heroin while diluting heroin. It’s not like the old days when heroin got weaker and more diluted as it went down the supply chain. Today, dealers are adding potency on top of potency, clueless as to what is already in the mixture.

Overall, the Mexicans should be commended. They are supplying the U.S. and Ohio drugs that are largely high quality, accurately labeled, inexpensive and pretty safe. But when the heroin arrives in the U.S. — especially Ohio — the drug has reached the epicenter of adulteration and things go very, very wrong.

Because drugs are illegal, nobody — not dealers and certainly not consumers — has a clue about how much of this or that has been added to the powder. Death is inevitable and unavoidable when a larger consumer market operates with no transparency or quality control.

Why Ohioans die and Californians don’t

Black tar heroin is much safer than powdered heroin because it is technically hard to add fentanyl to black tar heroin. Adding fentanyl (usually a powder itself) to another powder is easy, whether the powder is heroin, cocaine, Xanax or baby powder (to create a fentanyl-only mix that can be sold as cocaine or heroin or put in a fake pill). Powdered heroin is often called “white heroin,” but, in fact, is usually a distant of white or brown.

The superior safety of black tar heroin is the likely the key reason California and other western states have low overdose rates compared to eastern and midwestern states. Black tar heroin is a tradition in the west and remains a cultural preference there. Like iced tea, powdered heroin could be shipped to California more easily and cheaply than it is now brought to New Hampshire and Ohio. It just isn’t.

In Ohio, powdered heroin has become the dominant form of heroin. Black tar is relatively hard to find in most of Ohio, although it can still be found. (No statistics on black tar vs. powdered heroin exist. This assessment is based on consumer reports.) 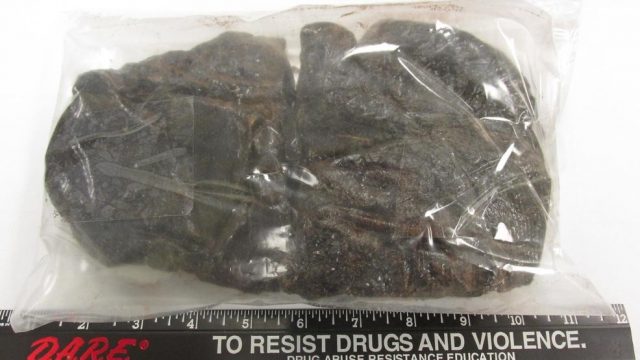 In November, a kilogram of black tar heroin was seized in a storage facility in Sidney, Ohio, 40 miles north of Dayton. The seizure removed safer heroin from the marketplace, pushing consumption to more dangerous powdered heroin and likely increasing overdose deaths. The unintended consequences of law enforcement actions can be a serious public health problem.

Law enforcement: back off black tar heroin to save lives

People who use heroin should use black tar whenever possible. Dealers should seek to initiate the shift to black tar heroin. It should be considered a premium product for those who value safety.

What can government do to advance this public health measure? Law enforcement should never take this safer heroin off the street because the alternative is far, far more deadly. Backing off the seizure of black tar heroin should be considered a form of drug checking. If it’s black tar, you know it is likely to be much safer than a powder version of the drug.

To restate: powdered heroin is especially dangerous because potency gets increased by many market participants at many stages of the supply chain. Nobody adding adulterants knows what’s really in the powder before the adulteration or after the adulteration. The process is ignorance stacked on ignorance. Black tar heroin is safer because it functions as a kind of  “lock box” against outside pollutants. Not that fentanyl can’t be added to black tar heroin, it’s just hard and impractical.

If we invented a new heroin that limited total potency and variability, we’d salute it as a public health innovation. The truth is: we already have a “safer heroin.” We should promote it. If saving lives and reducing overdoses is truly our goal, we should take advantage of this wonderful old invention: black tar “lock box” heroin. This reduction in overdose death can be accomplished at no cost. The method is “Do nothing.” Don’t prosecute black tar heroin. Put billboards everywhere with the public health message: “If you use, use black tar, not powder.”

Black tar heroin is often less potent that powdered heroin — at least when it crosses the border. Black tar heroin was 37% pure heroin in the DEA-tested samples, which were from heroin seizures of a kilogram or more, mostly at the border. (In other words, these were large wholesale amounts, not street-level quantities.)

Powdered heroin was 74% pure heroin, according to the DEA report. What this means for consumers is unknown. Powders essentially scream “adulterate me!” it’s impossible to know if powdered heroin that starts its journey at 74% purity ends up stronger or weaker when it’s sold to a consumer. Although nobody knows for sure, the powdered heroin is likely much, much stronger at the end of the journey than at the start. Synthetic opioids, treated like salt and pepper in the drug markets, have likely made the powder much more potent, even as the heroin gets diluted.

Ohio crime labs don’t distinguish between black tar and powdered heroin, not do the labs measure the amount of each drug contained in a mixture. A trace amount of a substance is treated the same as pure drug. Imagine a consumer, dealer, police officer, prosecutor or you looking at an off-white powder about which nothing is known. The powder could be:

The dangerousness of the two powders vary by many multiples.  But the crime lab report will merely say “heroin-fentanyl.”  The defendant will be sentenced as if these two mixtures are the same. They are not, other than being powders. The first one will kill you; the second one won’t.

The criminalization of drugs and drug users is supposed to be for reasons of public safety. The drug war is built on a foundation of factual ignorance. We must end our ignorance. Ohio’s #1 policy priority in its effort to reduce overdose death should be  measuring drug quantities — not just presence, but quantity — in the 200,000+ drug items confiscated by law enforcement every year. Black tar heroin should be one category, powdered heroin another. We can never understand or significantly influence overdose deaths. People die of drug overdoses, not just doses. How much matters. Indeed, it’s the only thing that matters in life and death.

For now, dealers and users should seek out black tar heroin whenever possible. It should be sold at a premium because (a) it is really heroin, and (b) it is much, much safer that powdered “heroin.”  The potency may be lower, but so will the variability, unpredictability and the risk of death. Remember, you can always use more, you can never use less. Be safe.