Montgomery County falls to No. 7 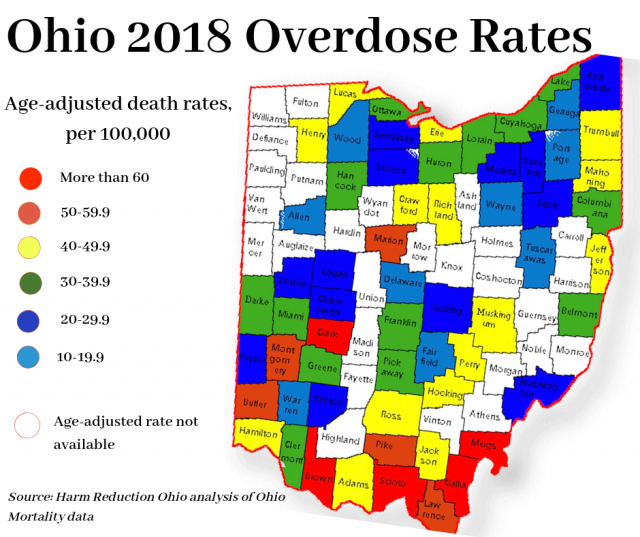 Sixty-one Ohio counties experienced a decline in overdose deaths in 2018 while 24 counties had increases. The number of deaths in three counties was unchanged.

Why did overdose death rates fall? 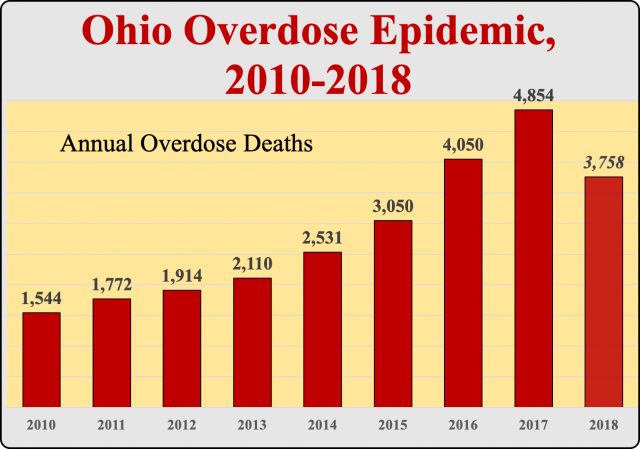 The Centers for Disease Control and Prevention estimates that overdose death fell about 4% nationwide in 2018, far less than Ohio’s drop of 22.6%.

The cause of Ohio’s sharp decline in overdose death is the same as the cause of its sharp rise in death: carfentanil. The ultra-potent fentanyl analog came fast and hard into Ohio in 2016, killing about 2,000 Ohioans from mid-2016 through mid-2017.

For reasons unknown, Ohio was the epicenter of carfentanil. No other state came close to matching Ohio in the volume of carfentanil found in drugs confiscated by law enforcement or in the number of people that it killed. Carfentanil was found in 50.5% of all drugs tested in the Ohio Bureau of Criminal Investigations crime labs in June 2017. The CDC reported Ohio’s carfentanil-related death rate was 21 times that of other states that it studied. (See this Harm Reduction Ohio story and others documenting the role of carfentanil.)

In other words, Ohio’s soaring overdose death toll in 2016 and 2017 was caused by a sudden, unprecedented increase in carfentanil in Ohio’s illegal drug supply. The 12-month period — the second half of 2016 and the first half of 2017 — may be the largest episode of mass death from a single cause in the history of modern drug prohibition.

Carfentanil killed 2,000 Ohioans in 12 months, in what may be the largest episode of mass death from a single cause in the history of modern drug prohibition.

In the second half of 2017 and throughout most of 2018, carfentanil’s presence in Ohio declined sharply so that in the fall of 2018 it had nearly vanished. However, carfentanil started being found increasingly again in drug seizures around last December, a trend that has continued in 2019. Overdose deaths in Ohio have started to rise again in tandem with carfentanil’s return.

To try to understand patterns in overdose deaths — “unintentional drug poisonings,” in the language of mortality data — without analyzing the content of the poison is like trying to understand lung cancer while ignoring smoking.

Ohio counties with the highest rates in 2018

The highest death rates are mostly in southern, rural Ohio. Note that Cuyahoga (Cleveland) and Franklin (Columbus) had overdose death rates very close to state average in 2018. Hamilton County (Cincinnati) was significantly higher than the state average but not in the top 10.

The Ohio Department of Health does not compute age-adjusted overdose death rates for 17 Ohio counties because data is insufficient in these small counties to adjust the death rate based on the age of the population and those who died.  However, that doesn’t mean these counties have escaped the overdose epidemic.

The counties for which the Ohio Department of Health does not provide age-adjusted death rates are shown in the white in the chart at the top of this story. 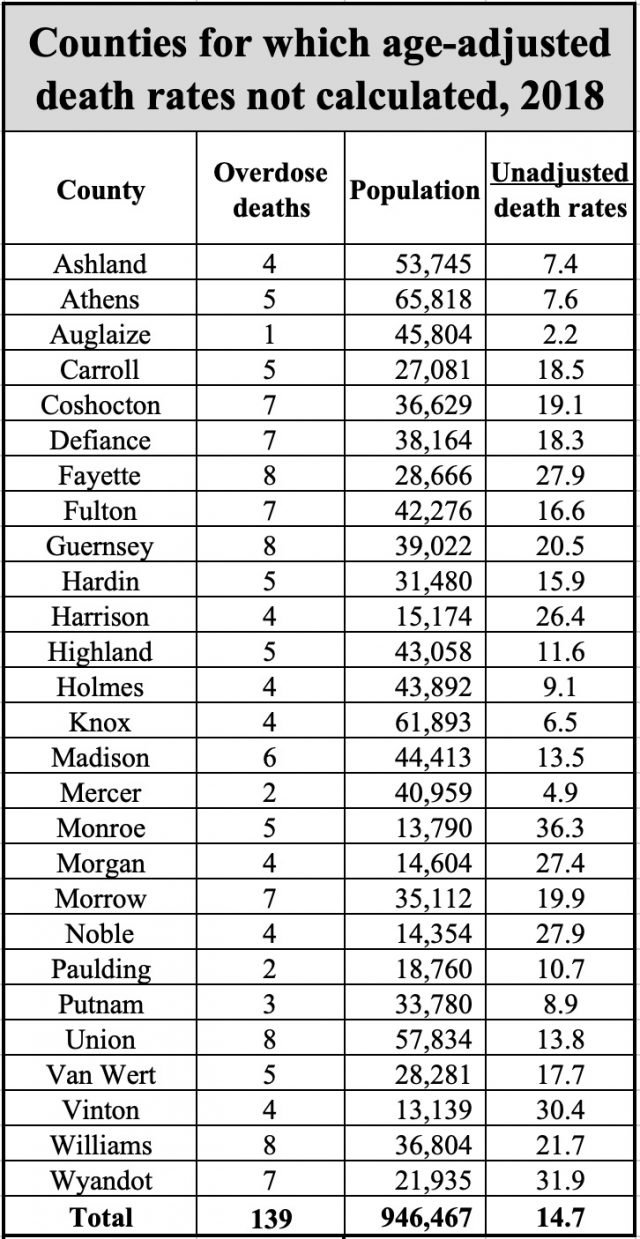 Finally, here is an alphabetical chart showing all Ohio counties, so you can see how your county fared. 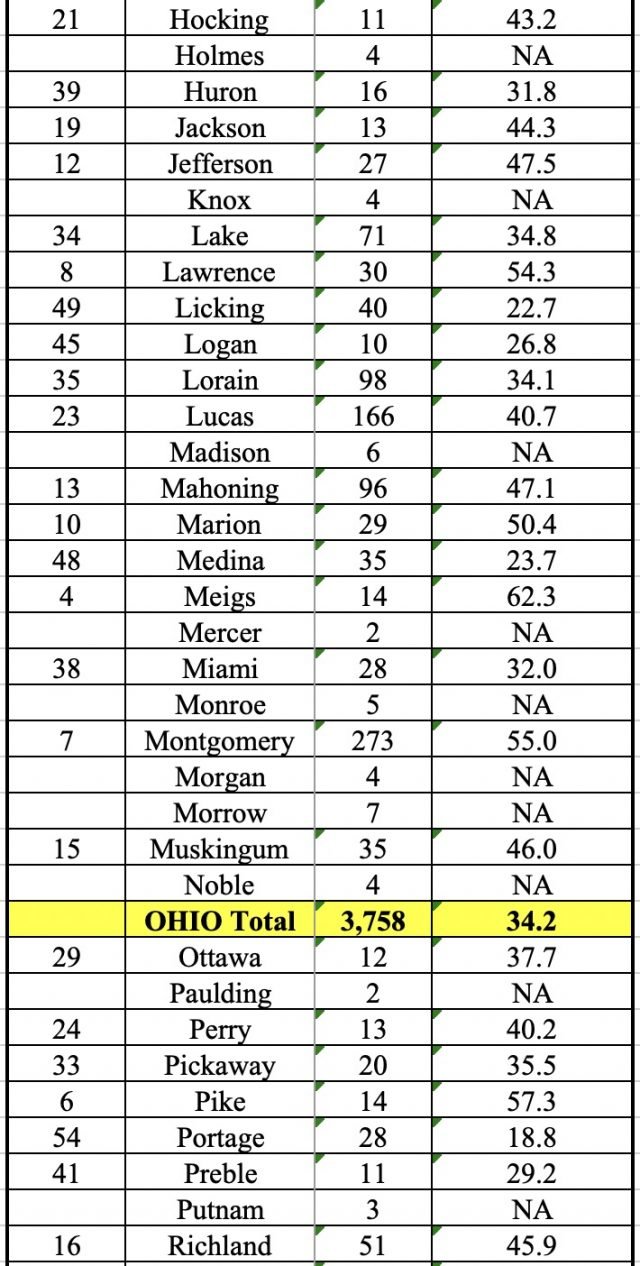 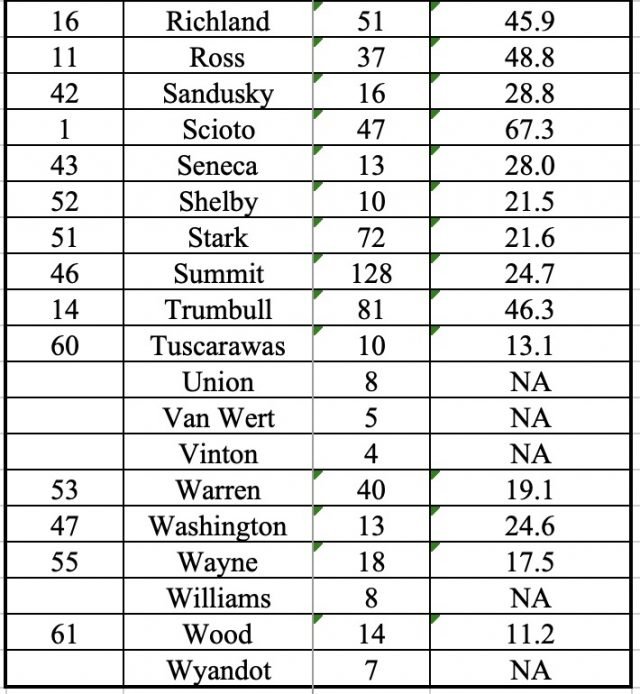