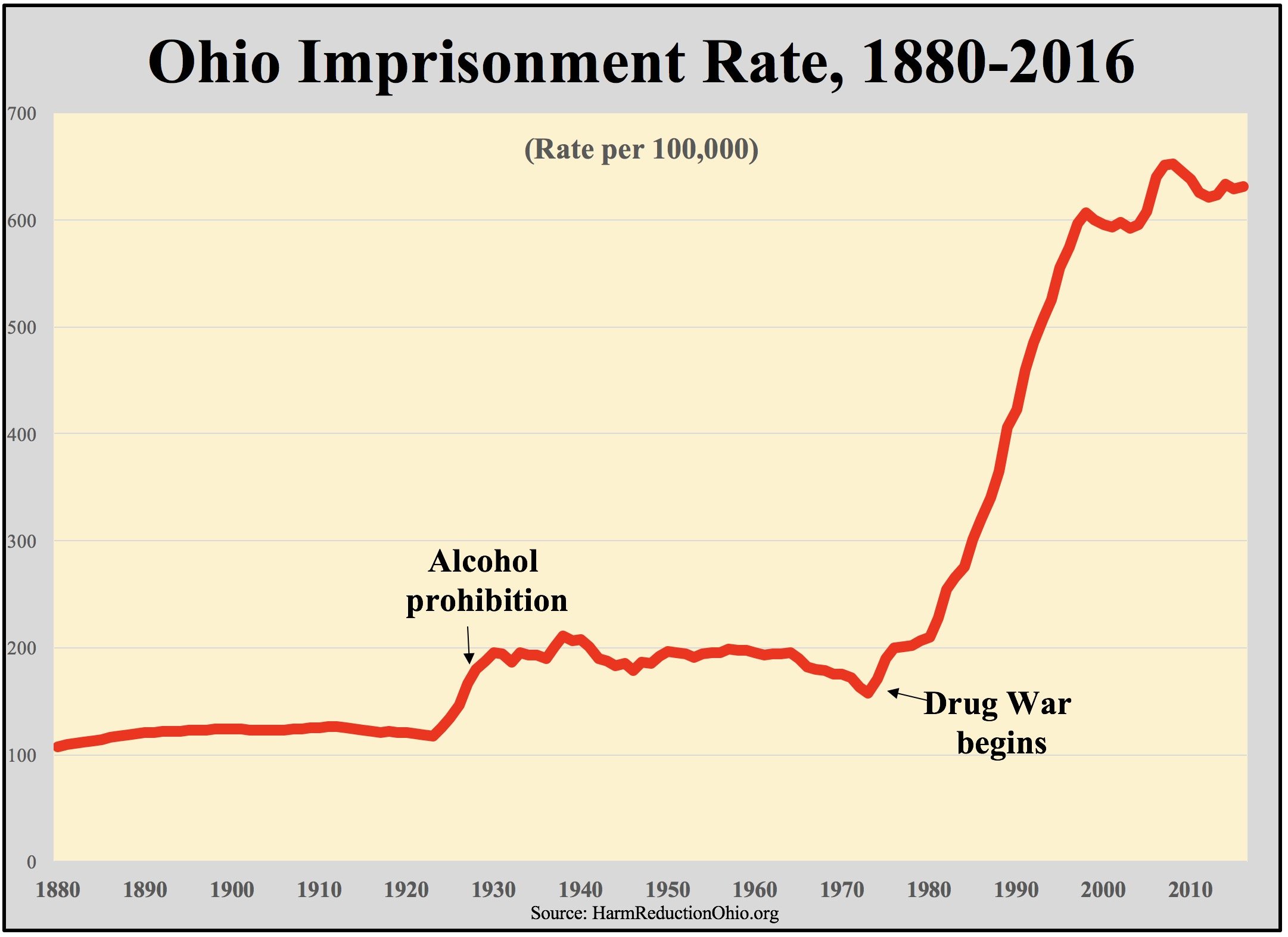 I have been following imprisonment rates since the 1990s, when I was a national reporter at USA TODAY. I believe I was the first reporter to describe this era as one of mass incarceration, although I used the term “mass imprisonment.” (Still prefer it.)

When I left USA TODAY in 2013 to work on making Ohio a better place, I calculated historical imprisonment levels and rates for Ohio. The work took four days, even though I had worked with the data at a national level for 25 years. The work paid off in the chart above.

It’s a rather astounding graphic. Few people realize how abnormal our current love of imprisonment is. It is out of whack with both with other industrialized counties and our own nation’s traditions.

Where the numbers come from

Imprisonment includes people in state prisons, local jails and juvenile detention facilities. Ohio has no federal prisons. The relatively small number of federal prisoners held in temporary detention in our state are not included in the rate.

I first published Ohio’s data a few years ago, starting with1880-2013 and updated to add 2014 when those numbers came out.

With Issue 1 on the ballot, the  time was right to update the chart for 2015 and 2016, the most recent year available.

This tells us that most Ohioans are startled to know that imprisoning people has reached such unprecedented levels. The reason is three-fold: we are locking up more people for more things and for longer times.

The drug war is driving it all. Because 1.8 million Ohioans use illegally drugs annually, any number can be harvested for imprisonment. In 2016, Ohio imprisoned 72,283 — 71% in state prisons, 26% in local jails and 3% in juvenile detention facilities.

This doesn’t count the 256,400 people in Ohio under probation, parole and other forms of criminal justice system control. Ohio ranks No. 3 in the country in this practice.

Racial bias is apparent throughout Ohio’s criminal justice system. For example, blacks use drugs in roughly the same rates as whites but arrest rates, especially for black males, is off the charts. 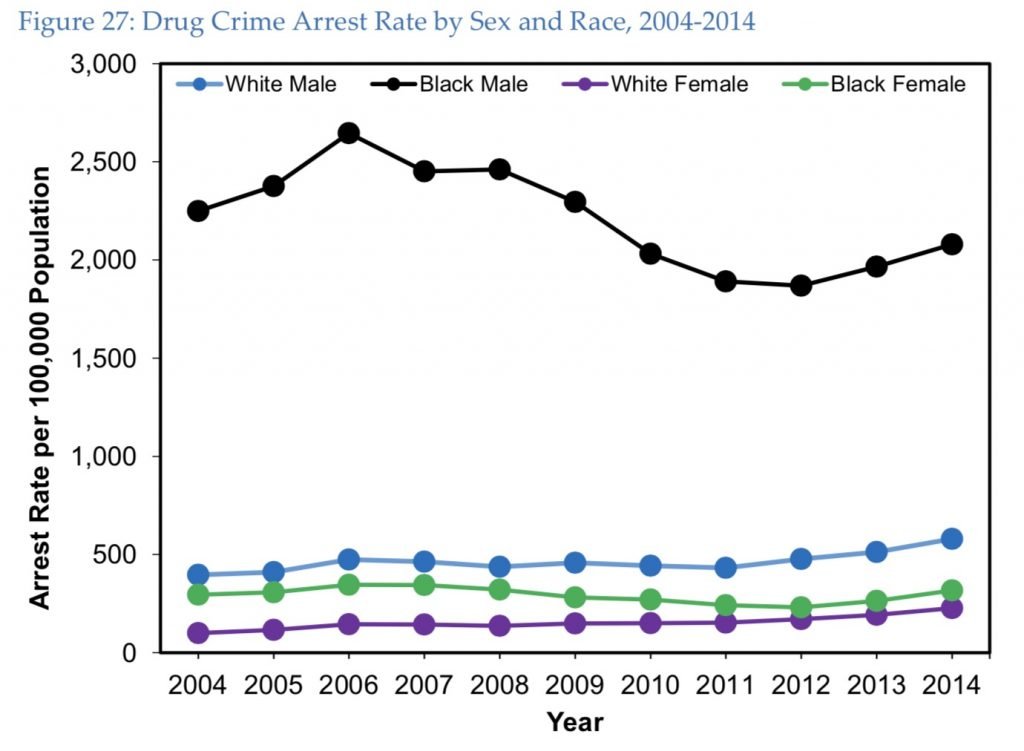 And most arrests are for selling drugs. The heart of the drug war is arresting people for drug possession. 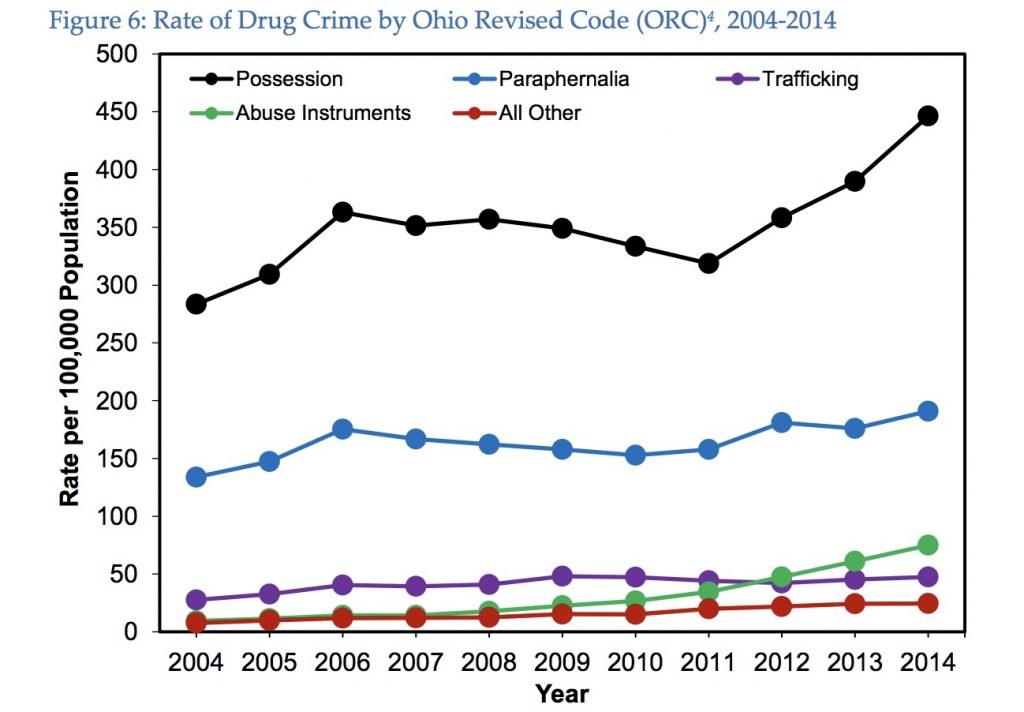 Both of these charts are from Drug Crimes, a report of the Ohio Department of Public Safety.

What does all this mean? We report. You decide.