Harm Reduction Ohio President Dennis Cauchon published this letter-to-the-editor to the editor in the Columbus Dispatch.

On Jan. 10, Harm Reduction Ohio began asking the Ohio Department of Health to warn the public that fentanyl-laced cocaine and methamphetamine were killing hundreds of Ohioans. On Feb. 21, the state health department emailed a “health advisory” to county health departments revealing that 850 fentanyl-related overdose deaths involved cocaine and 283 involved meth in 2017.

But for reasons it won’t explain, the health department withheld the warning from the public. It refused to put the advisory on the web, Facebook or Twitter so it can be seen and shared. This is reckless, irresponsible and a violation of the department’s own policies to share critical health information on social media.

If four people got sick from ice cream, health authorities would tell the public. In this case, more than 1,000 Ohioans died from tainted cocaine and meth. Ohio has a moral obligation to warn the public, especially drug users and their loved ones.

Here’s what people must know: Ohio’s entire illegal drug supply — except marijuana and psilocybin mushrooms — is adulterated with fentanyl and fentanyl analogs. It’s not just heroin.

Opiate addicts aren’t the only ones dying. Cocaine, meth, fake pills, LSD, Ecstasy, and more are dangerously contaminated in Ohio.

The Ohio Department of Health’s silence is inexcusable. 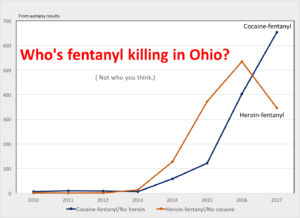