The Marion Star has a detailed and unusual story about a Columbus man who was arrested for shipping carfentanil and fentanyl to the environmental testing lab in Marion where he worked.

The oddest part of this story is that the police say the defendant, Ryan D. Kluth, claimed he used fentanyl to reduce his desire to view child pornography. Even more important, though, is that Kluth allegedly purchased a small amount of carfentanil (0.09 grams, or 90,000 micrograms) for his personal use. along with an unspecified amount of fentanyl. Postal authorities discovered the package containing carfentanil on its way from Canada.

This is an important detail it’s unclear if carfentanil is usually mixed into street drugs in Ohio or before it’s exported from Mexico. Carfentanil, a large-animal tranquilizer that is much more powerful than fentanyl, is the most deadly fentanyl analog. It was a significant killer in Ohio in 2017, especially when mixed into cocaine and meth.

The prevalence of carfentanil appears to have declined sharply and inexplicably in late 2017. But it’s unclear why the analog has mostly gone away, just as it’s unclear why it suddenly became common in Ohio in 2016. 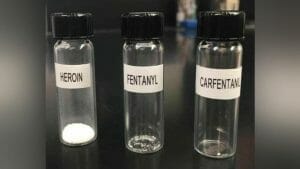 Unlike heroin, fentanyl and carfentanil must be diluted in a liquid to ensure it’s evenly distributed and safe for human consumption. Heroin can be diluted in powder form.

Fentanyl kills because its small size requires that dilution be done precisely and properly (i.e., in a liquid). Illegal drug dealers lack the skill and equipment to dilute fentanyl accurately and safely, so fentanyl can never be a safe black market drug. Carfentanil is active in even tinier amounts than fentanyl, meaning it should never, ever be used in black market drugs, despite the enormous value of its compactness.

The 47-year-old man who was arrested worked at Alloway, a respected Ohio environmental testing lab, so it’s possible he had technical expertise that allowed him to dilute these drugs properly. The defendant said he bought the drugs (on the dark web) for his personal use, and no evidence has been presented otherwise.

The public policy point is that law enforcement and public health authorities need to be more sophisticated about illegal drugs. The ranking of marijuana as a Schedule I drug is the best known example of ludicrous beliefs that control drug policy. 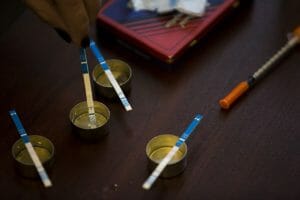 But this “an opioid is an opioid” belief is a moral view that is medically and scientifically false. It’s an ignorance that has cost thousands of Ohioans, and tens of thousands of Americans, their lives.

The DEA controls research on Schedule I drugs and allows almost none to occur, not even basic research, such as how much is a fatal dose, what is the effect on euphoria, pain relief and respiratory depression (the cause of overdose deaths). 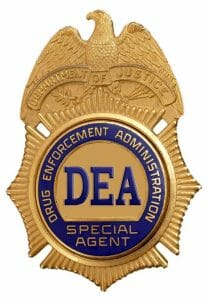 People are dying and, literally, no scientist or doctor is studying why. As you read this, a new fentanyl analog, cyclopropyl fentanyl, has started killing Ohioans in large numbers, mostly meth users who have no idea their stimulant is contaminated. How powerful an dangerous  cyclopropyl fentanyl? Why has it come to Ohio? Why it’s mostly in meth? Why may it suddenly leave?

None of this is of interest to Ohio authorities. An opioid is an opioid. The state’s interest is limited to stopping drug use, period, by arresting and/or medically treating drug users.

Ohio has no meaningful effort underway (outside of revival of overdose victims with naloxone) to reduce deaths in the population of the state’s active drug users. Drug users and drug dealers are largely on their own in trying to reduce overdose deaths. The abandonment of carfentanil is a good place for drug smugglers and dealers to start.

Drug prohibition has contaminated the entire illegal drug supply in Ohio except, thankfully, for marijuana, the most used illegal drug. Black market contamination and adulteration — not opioid addiction — is the primary cause of the drug overdose epidemic. Blaming users — especially heroin addicts — is a political explanation of overdose deaths that are caused, in reality, by bad policy that creates an impure drug supply.

The resistance to scientifically researching fentanyl analogs leaves the public dependent on twigs of information, such as why this man allegedly had 0.09 grams of carfentanil sent to him. His claim that it was for personal use and to reduce his craving for child pornography is mighty odd, but, when objective facts are scarce, it’s important to listen to everything.