Fentanyl levels (and overdose death) remain high in Ohio in 2021 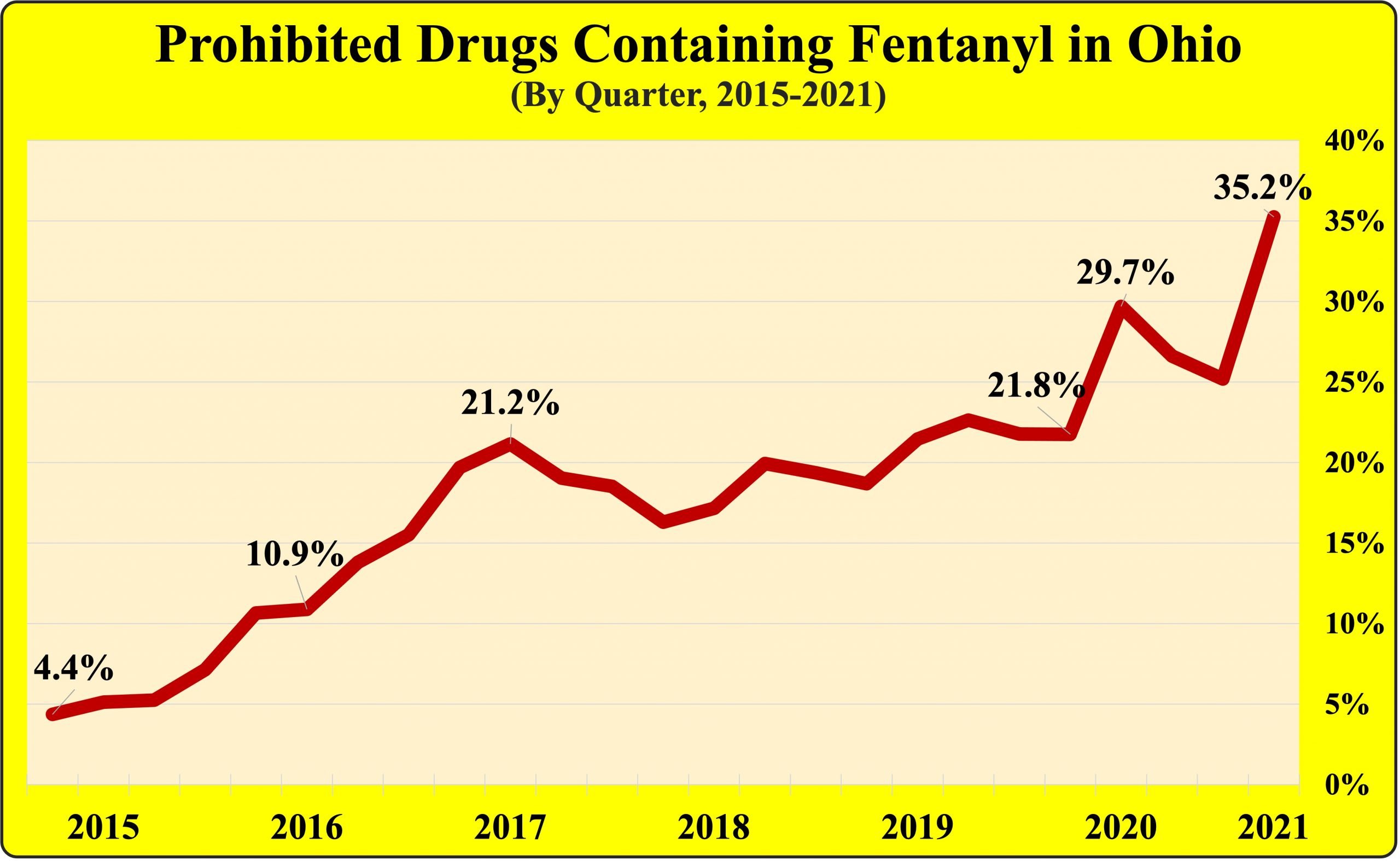 Fentanyl levels remain extraordinarily and dangerously high in Ohio’s drug supply so far in 2021. This trend to fentanyl being found in an increasing share of the drug supply means that overdose death are likely continuing at or near the record levels that have been seen throughout the covid-19 pandemic.

A Harm Reduction Ohio analysis of drug seizure data found that 35.2% of prohibited drugs (excluding marijuana) confiscated this year and tested at the state crime labs contained fentanyl or a fentanyl analog. Academic research using this data show that changes in the level of fentanyl in the drug supply explain more than 90% of changes in the number of overdose deaths that occur.

Thus, the high percentage of fentanyl recorded so far in 2021 in the drug supply is an ominous sign. These early numbers should be viewed cautiously because the sample size is still relatively small: Of 610 drugs samples tested so far, 215 contained fentanyl or a fentanyl analog.

In an average three-month period, the state Bureau of Criminal Investigations crime labs usually test more than 7,000 samples of drugs confiscated by law enforcement across Ohio. The crime lab is now testing mostly drugs confiscated in the fourth quarter of 2020, so there is a lag in understanding what is happening in drug markets.

That said, early results of 500 or more tests usually accurately foreshadow general trends. Additional data provides more precision and depth, such as an understanding of regional trends and the fentanyl levels in specific drugs, such as cocaine and methamphetamine.

The HRO analysis of BCI data include the results of 213,356 gas chromatography–mass spectrometry tests on drug confiscated between January 1, 2014 and April April 23, 2021.  See the numbers at the bottom of this story.

Timely analysis of drug seizure data is the most important number in overdose prevention because it is, by far, the most accurate predictor of overdose death levels. A Harm Reduction Ohio maxim states: “Tell us what’s in the drug supply, and we’ll tell you how many people will die.”

How to prevent overdose death

What does this mean for policy? Drug checking and making the prohibited drug supply safer for people who use drugs are the only way to significantly reduce overdose death during drug prohibition, a policy that causes adulteration and death. Treatment, naloxone distribution and other efforts prevent some deaths overall, but the safety — or lack of it — in the drug supply is the primary driver of overdose death.

Harm Reduction Ohio updates the BCI drug seizure data every three months. We’ve previously reported that fentanyl reached record levels in Ohio’s drug supply last year during the covid-19 pandemic. The cause of the increase is uncertain but is likely the result of pandemic-related supply chain disruptions reducing the amount of heroin, cocaine and meth making it to Ohio. These relatively bulky drugs were replaced by ultra compact fentanyl, which is easy to smuggle by mail and other methods.

The net result: a more dangerous drug supply on average. Fentanyl is 9x more likely to cause an overdose death than heroin or cocaine, this study of Ohio found.

The increase in fentanyl in the drug supply is the primary driver of increased overdose death in Ohio, during the pandemic, with stress, social isolation and reduced access to treatment playing lesser roles.

Some good news in the data: carfentanil, which drive overdose death in Ohio to then-historic  levels in late 2016 and early 2017, has almost vanished from the Ohio drug supply. This is good news because carfentanil is far more potent by weight than fentanyl, making it extraordinarily difficult to dilute properly. Carfentanil is much more likely to cause death than fentanyl, although its level of lethality compared to fentanyl or heroin has not yet been determined. 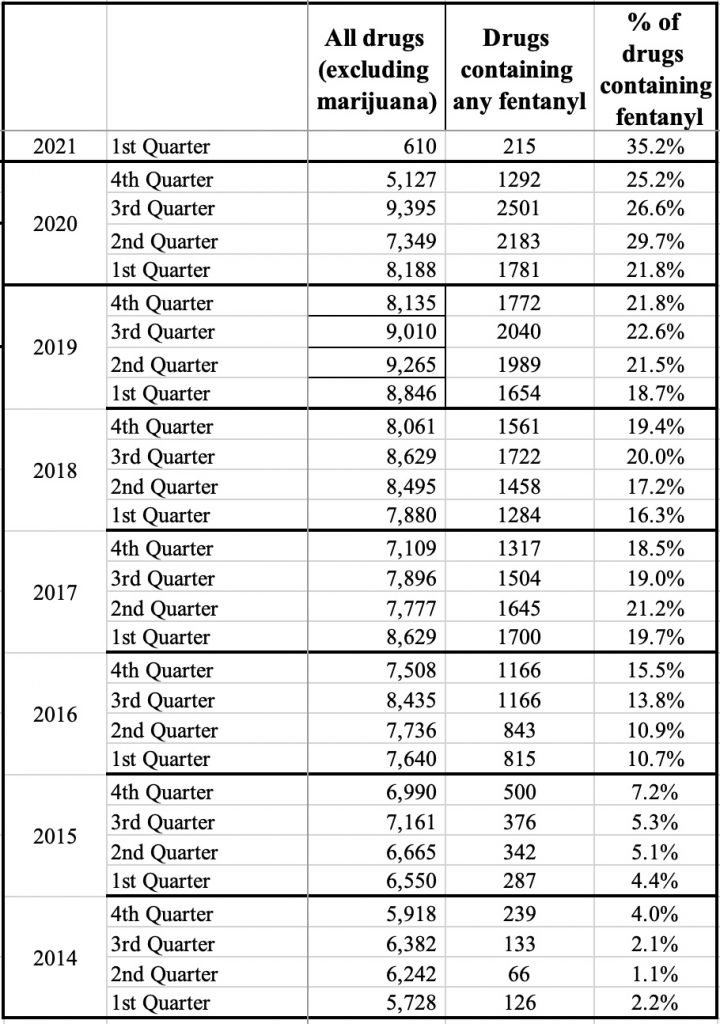