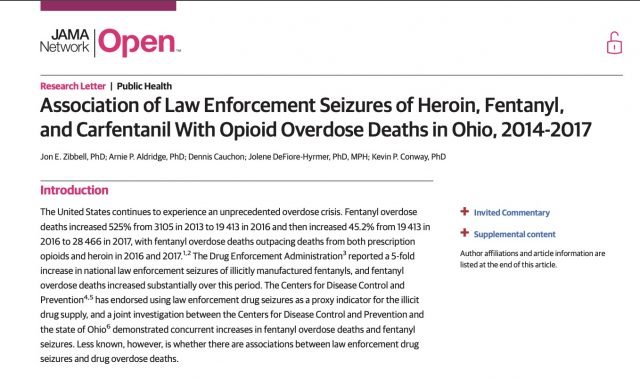 Epidemiologist Jon Zibell of RTI International is the lead author of the article, “Association of Law Enforcement Seizures of Heroin, Fentanyl, and Carfentanil With Opioid Overdose Deaths in Ohio, 2014-2017.” (Full article available here, at end of this article or by clicking above.)

Other co-authors include Jolene DeFiore-Hyrmer, PhD, MPH, Chief of the Violence and Injury Prevention Section at the Ohio Department of Health, and two statisticians at RTI, a non-profit research institute based in North Carolina.

Cauchon was given co-author credit because he obtained the drug seizure data used in the analysis. This data, from the Ohio Bureau of Criminal Investigation, is the largest drug seizure data set obtained by a private party.  HRO updates the data quarterly and makes it available at no cost to researchers and others who are interested.

The Drug Enforcement Administration keeps a larger — but less detailed — national data set. However, it doesn’t release the information to researchers or the public. 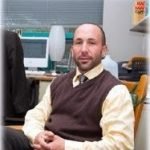 The purpose of analyzing the data is to see if understanding the chemical composition of the illegal drug supply can be used to understand and perhaps prevent overdose death. The answer to both questions appears to be yes. The analysis measures epidemiologically the differences in overdose death danger in various opioids, including heroin, fentanyl and carfentanil. The analysis is similar to measuring the role of smoking tobacco to lung cancer and alcohol in fatal crashes.

This basic epidemiological analysis had not been done before because of a lack of data on the chemical composition of the illegal drug supply. By using the BCI drug seizure data and detailed Ohio Department of Health mortality data, Zibell and his co-authors showed that fentanyl and its many analogs caused overdose deaths at significantly different levels. Carfentanil, in particular, killed at extraordinarily high rates.

Harm Reduction Ohio earlier reported that carfentanil came fast and hard into Ohio’s drug supply in 2016 before largely vanishing at the end of 2017. The spike in overdose deaths that drove Ohio to rank No. 2 in overdose death was almost entirely a function of carfentanil, much of it in cocaine, not heroin. It’s unclear why carfentanil was so prominent in Ohio but not other states, not even neighboring ones. 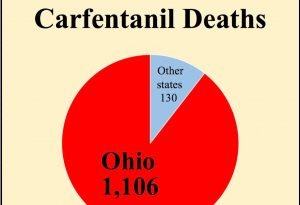 HRO’s BCI data set contains the results of gas chromatography–mass spectrometry tests on more than 400,000 drugs seized by police from 2008-2019. The BCI data set, obtained and analyzed with the cooperation of Ohio authorities, is the first time researchers have been able to test whether a relationship exists between seized drugs and overdose death. The Ohio drug seizure data was especially valuable because the drug supply changed rapidly from 2014 to 2017 and what was seized in Ohio’s 88 counties varied widely as did overdose death rates. Thus, the statistical value of the data set was large, in addition to the data set being the first of its kind available to researchers.

Harm Reduction Ohio used this data set in a less sophisticated statistical way to show that carfentanil was the primary reason that Ohio overdose deaths soared in the second half of 2016 and the first half of 2017. Ohio had  No. 2 overdose death rate in the nation in 2017, despite having average rates of drug use.

Harm Reduction Ohio also was the first to report that fentanyl and its analogs have moved into the cocaine and meth supplies, causing an enormous surge in overdose deaths. The BCI data explained why overdose deaths and demographics were changing fast in Ohio in 2016 through 2018.

The carfentanil phenomenon reported by HRO was later confirmed by the Centers for Disease Control: Ohio had 21x the death rate of other states studied by the CDC.

Fentanyl in cocaine and meth

Fentanyl’s contamination of cocaine and meth was originally discounted or disputed by by health authorities and people who use drugs but is now conventional wisdom. HRO currently has an Ohio Department of Health grant to increase possession of Narcan among cocaine and meth users. 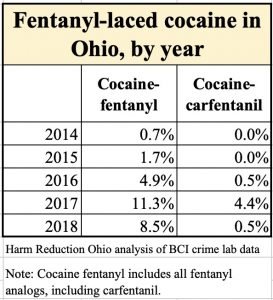 Currently, about 10% of cocaine in Ohio and 3% of meth contains fentanyl or a fentanyl analog. This is important because health authorities continued to focus on opioid use and addiction long after it was the primary driver of overdose death. In short, a little fentanyl kills a lot of cocaine and meth users because, unlike heroin users, people who use cocaine and meth often have little opioid tolerance and are extremely vulnerable to unexpectedly consuming powerful opioids such as fentanyl. 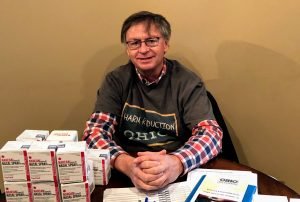 HRO President Dennis Cauchon puts in more straightforward terms: “Tell me what’s in the drug supply and I’ll tell you how many people will die.”

Cauchon adds: “Drug checking is the best way to immediately and dramatically reduce overdose deaths. Drug seizure data should be release to the public online promptly, in close to real-time. And individuals should be able to test the contents of illegal drugs without penalty before they consume a drug. Knowledge is power. This information can empower people who use drugs to avoid fatal drug doses. This information should be viewed as a crucial public health tool, not a police secret.”