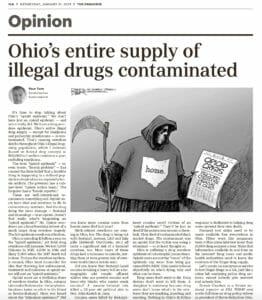 It’s time to stop talking about Ohio’s “opioid epidemic.” We don’t have just an opioid epidemic — and never really did. We have a drug overdose epidemic. Ohio’s entire illegal drug supply — except for marijuana and psilocybin mushrooms — is contaminated. That’s causing overdose deaths throughout Ohio’s illegal drugusing population, which I estimate (based on federal drug surveys) at 800,000 to 1 million residents a year, excluding marijuana.

The term “opioid epidemic” — or, even worse, “heroin problem” — has created the false belief that a horrible thing is happening to a defined population of opioid users, especially heroin addicts. The governor has a cabinet- level “opiate action team.” The Enquirer has a “heroin reporter.”

These are well-intentioned responses to something real. Opioid users have died and continue to die in extraordinary numbers. And the drug doing the most damage — fentanyl and its analogs — is an opioid. Doesn’t that make what’s happening an “opioid epidemic?” No. Opiate overdoses are a heartbreaking subset of a much larger drug overdose tragedy. The full epidemic needs our attention.

Ohio is spending $1 billion a year on the “opioid epidemic,” yet fatal drug overdoses still increase. We lost 3,000 Ohioans in 2015, 4,000 in 2016 and likely 5,000 when the 2017 death toll is done. To turn the overdose epidemic around, Ohio must reconsider the idea that throwing law enforcement, treatment and naloxone at opioid users will end an “opioid epidemic.”

Opioid users are a declining share of overdose deaths. In Ohio, autopsy lab results find cocaine-fentanyl combinations twice as often in the blood as heroin-fentanyl. Have you heard about the “stimulant epidemic?” Did you know more cocaine users than heroin users died last year?

Meth-related overdoses are soaring in Ohio, too. The drug is being cut with fentanyl. Ecstasy, LSD and fake pills (Adderall, OxyContin, etc.) all carry a significant risk of a fentanyl overdose, too. Most users of these drugs lack a tolerance to opioids, putting them at even greater risk of overdose death than a heroin user.

Did you know that fentanyl-laced cocaine is taking a heavy toll on a demographic odd couple: affluent whites who use powder cocaine and inner-city blacks who smoke crack cocaine? A cocaine-fentanyl mix killed a 23-year-old political aide to Gov. John Kasich in June.

Cocaine users killed by fentanyllaced cocaine aren’t victims of an “opioid epidemic.” They’d be just as dead if the poison was arsenic or hemlock. They died of contaminated black market drugs. The contaminant was an opioid, but the victim was using a stimulant — or at least thought so.

Ohio is suffering a drug overdose epidemic of catastrophic proportions. Opioid users are not the “cause” of the epidemic any more than being gay caused HIV/AIDS. Ohio needs to focus objectively on who’s dying, why and what can be done.

Fentanyl test strips need to be made available free everywhere in Ohio. (They work like pregnancy tests.) Ohio crime labs test more than 10,000 drug seizures a year. Make that information available in real-time on the internet! Drug users and public health authorities need to know the contents of the illegal drug supply.

Let’s create an anonymous service to test illegal drugs in a lab, just like a crime lab analyzing police drug seizures, except nobody gets arrested and nobody dies.