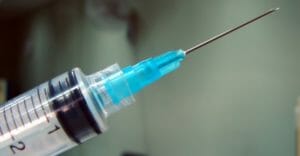 Ohio has eight clean needle programs that limit the spread of infectious disease among people who inject drugs. Clean needle campaigns are spreading across Ohio, partly because the Republican legislature made it easier for county health boards during the current opioid epidemic.

This is great news. Providing sterile needles and syringes to drug users who inject has been proven in many studies over 30+ years to sharply reduce cases of HIV/AIDS, hepatitis C and other infectious diseases — all without increasing drug use or crime. For example, the Centers for Disease Control found infectious diseases always dropped. For HIV/AIDS, the decline ranged from 17% to 50%. 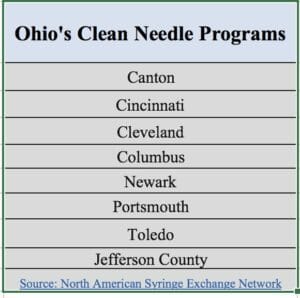 The health benefits to users and the financial wisdom of preventing lifelong diseases that are are costly to treat are obvious today to both Republicans and Democrats. In Virginia, a conservative Republican legislator (who’s also a physician) recently oversaw legislation to make that state the latest to approve broad, statewide access to clean needles.

In Ohio, Cleveland was the first to create a needle exchange, using its home rule powers to get a program growing in 1995. But nothing much happened after that until just a few years ago when the opioid epidemic hit Ohio.

Today, Columbus stands out as Ohio’s public health leader in the clean needle effort. Its innovative approach is helping get sterile needles to a wider range of users over a broader geographic territory — all without spending more than traditional needle exchange programs.

Columbus’ needle and syringe access program is a good example of the benefits of harm reduction in dealing with a politically sensitive issue.

The Columbus program is called Safe Point and is run by Equitas Health, a not-for-profit health care provider that got its start fighting AIDS in 1984 and has developed deep connections to hard-to-reach groups such as drug users. 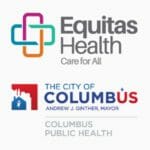 All clean needle programs in Ohio exchange sterile needles and syringes for used ones brought to the clinic by drug users. Safe Point does that, too, safely disposing of dirty injection equipment and providing sterile replacements to drug users.

But Safe Point goes a step further than other Ohio programs, although its strategy is used in many other states. Safe Point will give sterile syringes and needles to drug users even if they don’t turn in dirty equipment in exchange.

Unlike many other states, Ohio makes it illegal for a drug user to buy hypodermic needles or syringes. In our state, sterile injection equipment can only be purchased by people who have a prescription drug, such as insulin, that needs to be injected.

This makes drug users and addicts dependent on each other for (dirty) needles or public health authorities for clean ones. To the compassionate and fiscally prudent mind, injecting heroin with a sterile needle is a better choice than injecting with a needle that’s been used multiple times by different people. 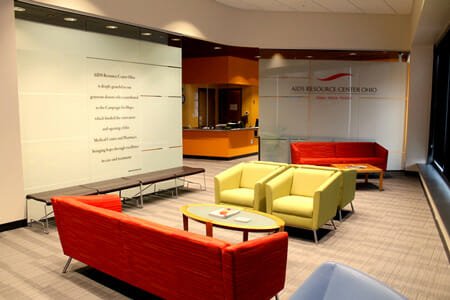 The law against sterile syringes and needles may sound good in theory, but studies show needle access doesn’t increase (or decrease) intravenous drug use. It does, however, influence the spread of infectious disease among drug users and beyond.

The Safe Point access program makes sterile needles and syringes widely available the drug user population. Safe Point’s two clinics are only open a total of eight and a half hours per week spread over three days. But just as users share dirty needles, they share clean ones, too.

In some cities, an enormously beneficial underground market in sterile syringes has developed. Drug users don’t want to die of overdoses, nor do they want to get an infectious disease. There is consumer demand for safe needles.

The Safe Point access program — plus a small underground market, if it has developed, as I hope! — is a fantastic tool to get sterile syringes to the hardest-to-reach drug users, such as those who seldom or never visit the clinic, or who live a good distance away, in the city, suburbs or rural areas.

A needle access program should function like a public health program on steroids (which, in case you didn’t know, people also inject).

In Philadelphia, a black market in clean needles is given part of the credit for a stunning decline in the number of new HIV cases among drug users. NPR did a fascinating report on the Philadelphia story in 2015 detailing this decline.

“You get this extraordinarily efficient distribution of needles, exactly where they need to be at the right time,” said University of Pennsylvania researcher Philippe Bourgois to NPR. “And so that’s what basically, I think, prevents a much worse spread of HIV.”

Wouldn’t it be great if Columbus had a similar success?

Columbus’ Safe Point program is changing the social norms of drug use so that using sterile syringes becomes common and expected — even to users who might never come to a Safe Point clinic downtown on a Friday morning.

This is a small but telling example of what people mean when they say Columbus is becoming a more innovative, dynamic city. Safe Point’s needle access program is a shining example of accomplishing an extraordinarily difficult thing — changing drug user behavior — on a shoestring budget. It taps (and shapes) the natural rhythms of the drug using community as a cleverly written iPhone app might do for its audience.

Most drug users will still come to the clinics. In fact, needle access programs are a well-known draw for drug users, putting them in contact with drug treatment and other health programs. Needle access is just one of the six things that Safe Point does — along with overdose prevention, primary care, drug intervention, infectious disease testing and anonymous care — but it is enormously effective in attracting drug users to make contact with caregivers.

Remember, Safe Point is run by doctors and its core value is keeping people healthy. At Safe Point, they think like doctors, not like cops. And elected officials — who know mass incarceration is a disastrous failure — need to shift away from the belief that more arresting and imprisoning is the answer. 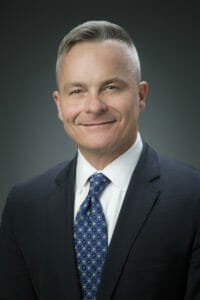 In a way, Safe Point doctors and administrators are really accidental economists. The clean needle access program is a perfect example of Freakonomics, the concept that a hidden world of incentives often leads to unexpected results. The idea was named and described by economist Steven Levitt and journalist Stephen Dubner in their best-selling book of the same name.

Safe Point’s program is less than two years old, so it will be a few years before health benefits can be confirmed and documented in a systematic way. But other needle exchange programs should consider trying this more aggressive approach to getting sterile needles and syringes into the hands of intravenous drug users. We are in the middle of a true health disaster. This is the time to be bold, not cautious.

Hospitals don’t trade in old needles for new ones. They use them once, then dispose of them. That’s proper public health behavior. Drug users should do the same, rather than collecting them and riding the bus to exchange program with a dozen dirty needles in their purse or coat pocket. This adds risk to the public, rather than reducing it.

All clean needle programs teach users how to safely dispose of dirty equipment. And many needle disposal bins exist, although even more would be better.

It’s time for Ohio to go beyond an old-fashioned model that requires users to preserve and carry used needles and syringes. Not using heroin at all may be best, but, absent that, using a needle and syringe only once is the way to avoid HIV/AIDS or hepatitis C (with its $1,000 a month pill for treatment).

Clean needles in every heroin users possession? I can live with that — and so can drug using Ohioans.