How much fentanyl will kill you?

Less than you think

Harm Reduction Ohio reviewed all available research and worked with an anesthesiologist, plus two Ph.D. chemists, to estimate how much fentanyl will kill you. It’s much less than you think — especially if you’re a new user or one who hasn’t used recently. 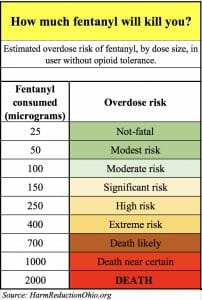 These estimates are for non-tolerant opioid users.

One thousand micrograms is very likely to stop your breathing and kill you. Even half that amount will put you at death’s door.

When anesthesiologists knock you out for surgery, they start with 25 micrograms…wait a few minutes…then give another 25 micrograms for a total of 50 micrograms.

Over multi-hour open heart surgeries, patients might get 250 to 500 micrograms of fentanyl total. In extreme cases, maybe 700 micrograms.

Street doses of fentanyl (mixed into heroin or not) might be in the 500 to 2,000 microgram range, although beware of this claim. In truth, almost nothing is actually known about how much fentanyl is in street drugs, and doses vary enormously, often far outside this range, on both the lower and higher end.

Regular heroin users who have a tolerance to opioids can take more fentanyl, possibly two or three times more, without suffering an overdose.

According to one report, long-time addicts who desire fentanyl seek dose ranges between 250 and 1,000 micrograms. These amounts can kill a non-tolerant users, including veteran heroin users who have been abstinent for awhile 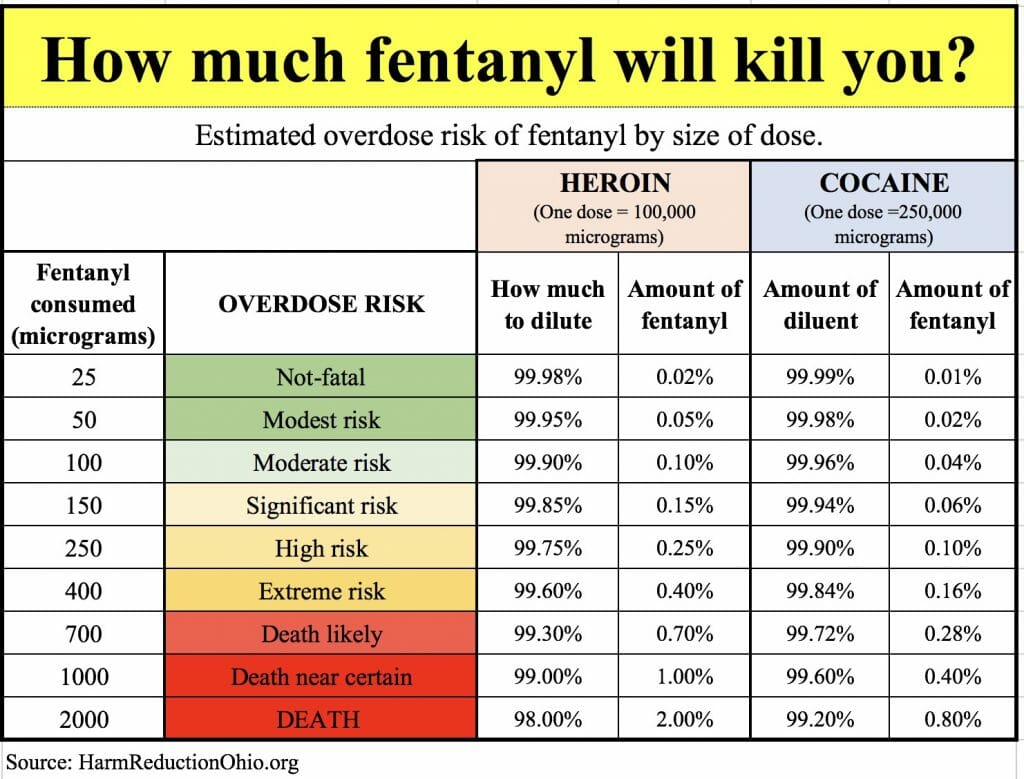 Doing the math tells you that fentanyl must be an extremely tiny portion of a drug mixture if that mixture is treated as heroin or cocaine. Fentanyl should always be diluted to a maximum of one part fentanyl to 1,000 parts filler. Dilute, dilute, dilute.

Conventional medical wisdom is that 2,000 micrograms is the “minimum lethal dose” — in other words, the smallest amount that can be fatal. This estimate is far too high. Two thousand micrograms of pure fentanyl injected into a vein would cause even most heavy heroin users to overdose — especially if fentanyl is mixed with any other substance, such as heroin, alcohol or Xanax.

The official estimate is a guess based on a handful of anecdotes. The cases all involved users with high opioid tolerance. And, remember, they were dead.

Fentanyl is the only drug estimated in the chart. The numbers do not apply to fentanyl analogs.

Fentanyl has more than 600 analogs (variants). An ever-changing group of about 20 analogs is found in street drugs.

Each analog has a different safety profile. Some are more dangerous than fentanyl, a few appear to be a little less likely to cause overdoses (but still more likely to do so than heroin).

One analog, carfentanil, is especially dangerous. It can never be used safely by humans because it is potent in amounts so infinitesimal that it can never be properly diluted in street drugs.

Doses vary widely in illegal drugs. Even the same mixture can have inconsistent potency and include potentially fatal “hot spots.”

A “hot spot” is part of a mixture that has an unexpectedly greater amount of fentanyl. “Hot spots” are invisible and unavoidable in street drugs containing fentanyl.

“Hot spots” exist because of the chemical nature of fentanyl molecules: fentanyl cannot be mixed into or “cut” into an existing powder without leaving dangerous, unseen clumps of fentanyl. No matter how much you grind or stir or shake the fentanyl mixture, potentially deadly “hot spots” will remain.

Why is this? Brief science lesson:

To equally mix 90 quadrillion fentanyl molecules with molecules of another powder requires an extra step — putting all the powder into a liquid, shaking up the liquid and then re-evaporating everything back into a powder. Shaking in a liquid is required to separate fentanyl molecules and eliminate hot spots.

This step is not done in illegal drug markets, so “hot spots” remain a serious problem.

How users can reduce overdose risk

The best way to avoid overdose death is not to use. If you do use, the British harm reduction group Release offers these tips for saying safe: