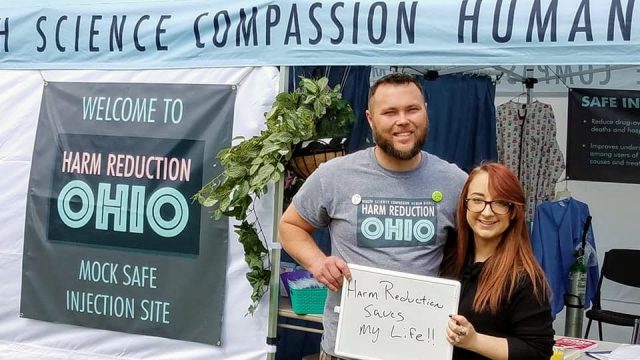 Billy McCall, our beloved syringe program advocacy director, was in court in Newark, Ohio, this morning for having a “dirty” urine test last month.

Billy, one of the smartest and hardest working men you’ll meet, had been sober for nearly a year but started using again in June. His 11+ months of sobriety was Billy’s longest period of sobriety since he’d dropped out of high school in 9th grade to work, use drugs and deal them.

We congratulate Billy on his long run in recovery and the great work he continued to do even after he started to use and struggle.

In the last year, Billy, 36, had been an enormous asset for Harm Reduction Ohio. If you’ve attended any of our conferences, you’ve likely met Billy and heard him speak. In the last year, Billy developed into a confident and articulate advocate for syringe services programs (“needle exchanges.”) As a person who has Hepatitis C and who nearly died from endocarditis — both the result of the use of unsterile needles — Billy’s voice carried gravitas from his personal experience when speaking with elected officials.

In addition to working with HRO, Billy built a successful painting business in the last year, employing four people, all in recovery. He got a home, a girlfriend, a dog, a credit card and a family vacation at the beach with his son. He was paying off old debts to the court every month.

Billy used heroin again in June and, although he kept his business and HRO work going, he missed an appointment to be drug tested, was put in jail, bonded out and then, a few days later, produced a urine test that showed drug use.

This morning, the Licking County Common Pleas Court ordered him back to prison for a year because his drug use violated the probation requirements for his last drug case. Billy’s lawyer asked that he get treatment rather than prison. He got a year behind bars, minus about four months for time served and other reasons, leaving him with eight months to serve in state prison.

Billy appeared in court in a prison jump suit, shackles and paper slippers. This is the stigmatized life of peaceful people who are addicted to opioids. 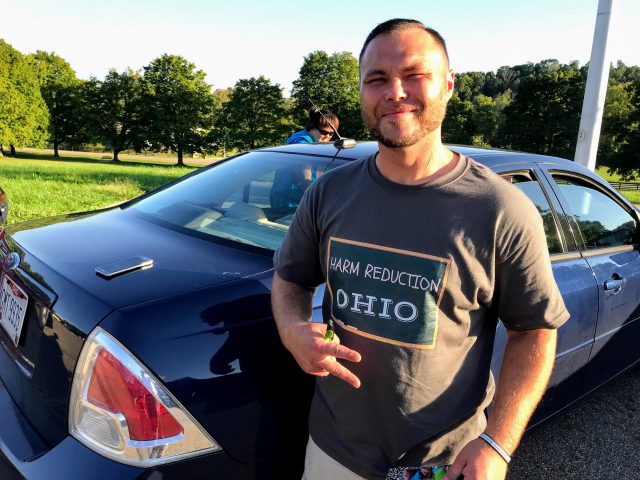 How we treat each other

What really happened to Billy this morning was what is wrong with drug policy today: a drug addict was sent to prison for being a drug addict.

The criminalization of drug use and addiction creates a never-ending cascade of penalties that drives mass incarceration and confines millions of people into lives of poverty.

People who’ve been addicted to heroin for 20 years usually need repeated attempts to get lastingly sober. Billy is no exception. It’s an odd system that treats a person’s greatest success in sobriety as a failure deserving imprisonment rather than an incremental success to build on.

The criminal justice system is the wrong place to handle people who use drugs.

There are hundreds of thousands of people just like Billy behind bars. This stigmatized class is never really free. It is attached to the prison system after release by perpetual drug testing.

The court imposed three years of court control after his release from prison in eight months. In other words, Billy will have to take urine tests for three years. If he fails any, it’s back to prison.

Think about that requirement. A person who’s struggled with heroin use for all his adult life goes back to prison unless he can be perfect for three years. What are the odds of that happening? Not good. This cycle of imprisonment isn’t about Billy’s health or even his drug use. It’s about people in power creating a class of people to hate and pretending that these deviants deserve to be harmed for their own good.  Righteous persecution is a concept invented by Saint Augustine in the 4th century, and courts perform these purification rituals religiously and ceremonially every day in America before sending away the impure, shackled and costumed, to be caged. For their own good.

I hope Billy makes it, but research shows that people who have used heroin for a long-time almost always need many attempts to quit. Change is best done incrementally.  Billy was abstinent for a year. Research shows it’s better to build on that success rather than to destroy his business, his family life, and his alternative social system and leave him with little tangible to start with when getting out of prison.

Billy has a loving mother and many friends. Many struggling with opioids have support system at all. What is the rational choice for a drug user released from prison with no job, no family and huge debts from court fines? We may sincerely want a person to stop using and rebuild their lives. But, in reality, the criminal justice system incentivizes failure and drug use. It may not be the system’s intent, but it is the system’s reality. 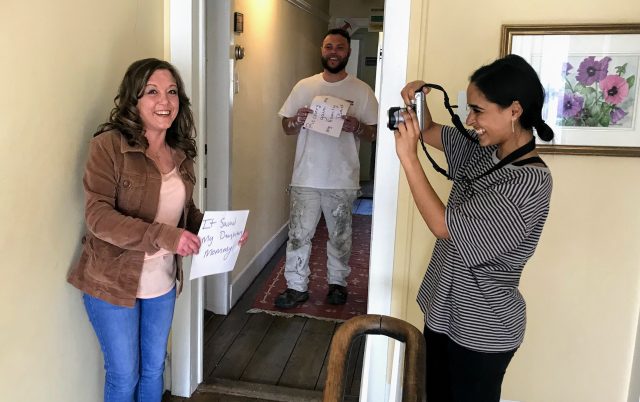 Billy, at the HRO office for a friend’s photo shoot in an anti-stigma campaign being developed by HRO intern Shanti Basu. His sign says: “Recovery gave me my family back.”

Harm Reduction Ohio judges people by the content of their character, not the metabolites in their urine. Billy has proven himself to be a man of exceptional intelligence and exceptional character.  He knows he has real and serious problems with addiction. We support his effort to win that fight within himself.

Billy McCall remains Harm Reduction Ohio’s Syringe Program Advocacy Director based on merit. He works hard, knows his stuff, cares about the less fortunate, gets the job done. We’re lucky to have him with us, no matter where he’s living, in a prison cell or at home with his dog.