Another 100 or so deaths to be added

What is the cause of the overdose death epidemic?

What can be done to end it? 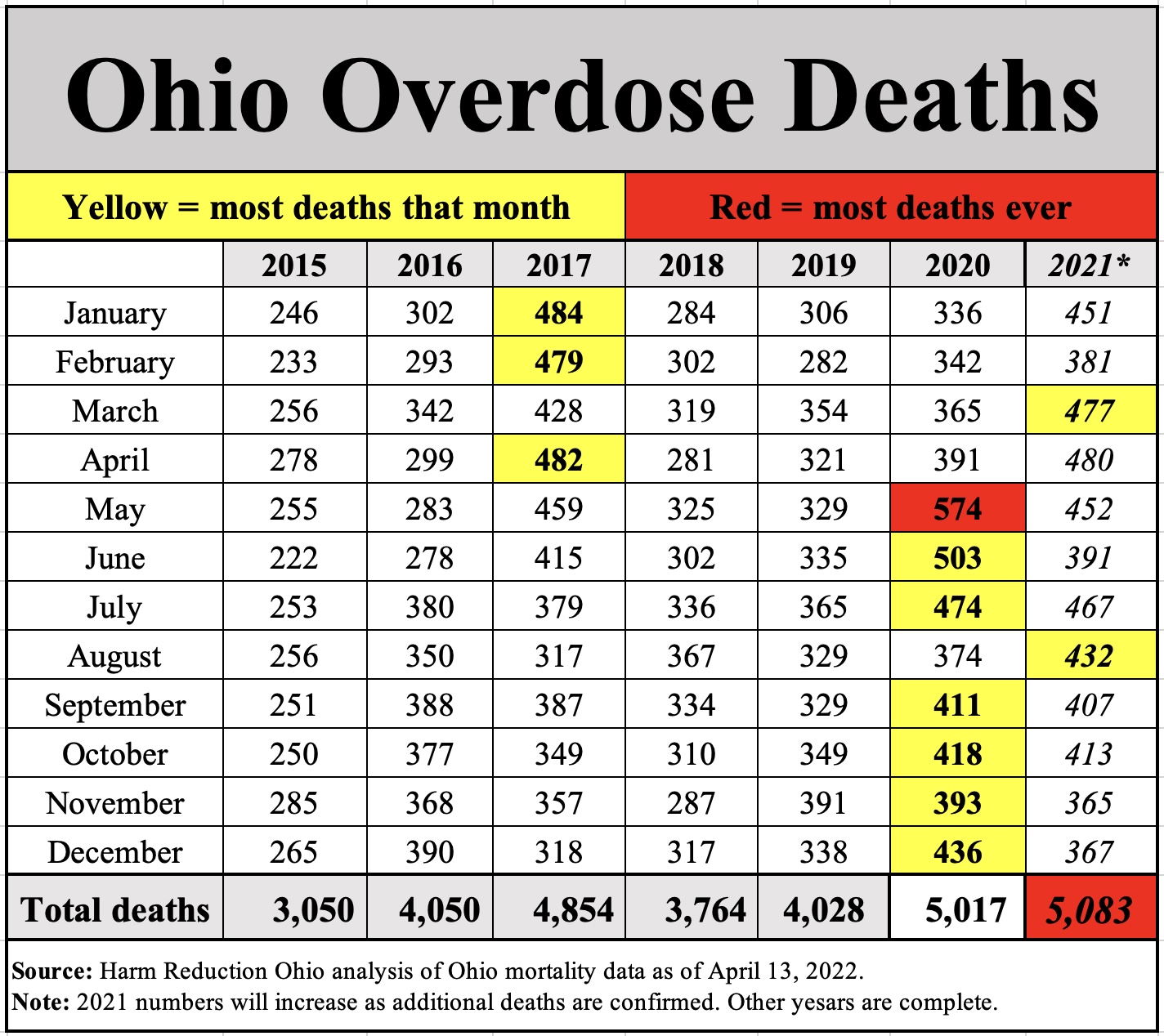 The Ohio Department of Health’s mortality data, updated today, reports that 5,083 Ohio residents died of accidental drug overdoses in 2021. That breaks the previous record of 5,017 deaths in 2020. The worst year before the Covid pandemic had been 2017 when 4,854 Ohioans died in an overdose death surge driven by introduction of carfentanil, the most powerful and dangerous fentanyl analog, into Ohio’s drug supply. (It has since gone away.)

The overdose death toll for 2021 will grow larger before the final tally is made. Additional deaths from late in the year are still being confirmed and added to the mortality data, which is finalized in August or September. Based on reporting for previous years, another 100 to 200 deaths will be added to the overdose total, bringing the death count to 5,200 or so.

In 2021, more people died from overdoses in March and August than in any other year for those months. April, September and October of 2021 could end up being record months for death, too, by the time the death count is complete.

What are we to make of this horrific level of death?

The slaughter of people who use drugs should not be accepted as “normal.” In 2010, when Oxycontin access was relatively easy, only 1,544 people died. It wasn’t until the well-intentioned crackdown on prescription opioids “succeeded” that overdose deaths reached the current catastrophic level. What happened? The well-intentioned crackdown on prescription opioids (of known dose, purity and potency) pushed people into the illegal market for adulterated drugs (of unknown dose, purity and potency).

Today, Ohio has fewer drug users than a decade ago – but exponentially higher rates and numbers of drug deaths. In other words, the crackdown of prescription opioids – no matter how sensible it seemed at the time – did not protect the lives of Ohioans who use drugs. In fact, it killed people who use drugs by the thousands every year. The prescription opioid crackdown triggered a new era of drug adulteration. A flood of compact, powerful, cheap and deadly synthetic opioids flooded drug markets.

Escalating the drug war kills people because it increases adulteration. First, do no harm has never been truer. What should we do? A safer drug supply is the only answer. Thoughtful regulation, such as:

The general public and elected officials have not yet acknowledged what is obvious: We’ve made a catastrophic policy error that needs to be reversed. The drug war is not protecting us; it is killing us. It is time to give peace a chance so thousands of Ohio residents and tens of thousands of U.S. citizens don’t have to die.