Is a little fentanyl-laced cocaine killing a lot of people in Ohio?

A DEA study in Pennsylvania hints that may be the case.

Ohio drug overdoses have moved sharply toward cocaine-fentanyl mixes and away from heroin-fentanyl. At least that’s what’s found in the blood of overdose victims at autopsy. 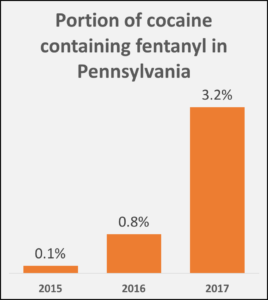 But the exact cause of the trend is a mystery. Autopsies tell us the chemicals in a drug overdose victim’s body, but they don’t tell us how or why the drugs got into that person’s system.

The soaring number of cocaine-fentanyl mixes challenges the conventional explanation for fentanyl overdoses: an opiate user consumed too much of a powerful opiate.

But cocaine and meth, also increasingly found with fentanyl in overdose autopsies, are stimulants, not opioids. Stimulant users rarely want an opiate in their drug, unless it’s in a niche product called a “speedball.”

If many or most people dying are cocaine and meth users, a heroin-centric approach to the drug overdose epidemic is too narrow. We need to find out why cocaine-fentanyl is so common in autopsies.

How much cocaine is laced with fentanyl?

The obvious way to answer this question is to look at lab results for confiscated cocaine. Every year, Ohio crime labs test tens of thousands of drug samples that have been seized by police. The data is kept in a centralized database, the National Forensic Laboratory Information System (NFLIS), run by the Drug Enforcement Administration. 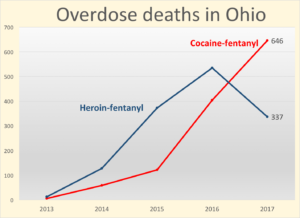 (Excludes cases that had both cocaine and heroin.)

And, there the data sit, essentially unused as a public health asset. For no good reason, the data are rarely analyzed to report the chemical composition of the illegal drug supply.

How common is fentanyl-laced cocaine in Ohio? It’s hard to think of a more obvious question when cocaine-fentanyl combinations appeared in the autopsies of more than 1,000 Ohioans in 2017. (Final numbers still being counted.)

Last week, I used state crime lab data to try to answer this question. But the Ohio Bureau of Criminal Investigation (BCI) hadn’t organized the data correctly to answer this question, so the results were helpful but of limited usefulness. (Ohio public records law gives access to collected data, but it can’t compel BCI to analyze data in a meaningful way.)

The public health question is simple: What percentage of Ohio cocaine is contaminated with fentanyl or a fentanyl analogue?

Last month, the DEA released the first-ever public analysis of cocaine-fentanyl mixtures in drug seizures. The report looked at more than 30,000 cocaine confiscations in Pennsylvania that were lab-tested from January 2015 through June 2017.

The results were presented in a nonsensical way, but I reorganized the numbers to answer the fundamental question: How much cocaine had fentanyl in it?  Answer: Fentanyl-laced cocaine was almost non-existent in 2015, but fentanyl or an analogue was found in 3.2% of cocaine in the first six months of 2017.

The trend is disturbing. This means a cocaine user in Pennsylvania had roughly a 1 in 33 chance of consuming fentanyl-laced cocaine. This is incredibly dangerous because most cocaine users don’t suspect they’re getting fentanyl and don’t have a tolerance to opioids. By contrast, a regular heroin user can handle two to four times the amount of fentanyl as a person without opioid tolerance.

Additional fentanyl risk to cocaine users — not counted in these numbers — occurred when a drug was sold as “‘cocaine” but contained only fentanyl, a situation more common than you think.

The DEA data show how fentanyl has become an all-purpose adulterant for every illegal drug except marijuana and mushrooms. This chart shows how cocaine is increasingly mixed with unrelated illegal drugs. 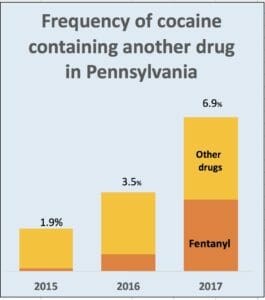 And a final chart shows the illegal drugs most commonly used as adulterants or perhaps unintentionally combined in sloppy lab work or cutting efforts. 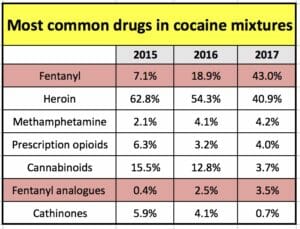 The DEA report has a comical theory about the cocaine-fentanyl combinations. It speculates that cocaine is being used to cut heroin and fentanyl!

The DEA conclusion reveals how the agency’s institutional bias against drugs, drug users and drug sellers distorts its ability to understand the drug trade, especially how it functions economically.

For Ohio, the report’s importance is that it may tell us something about what’s happening in our state. Is Ohio’s cocaine supply similar to Pennsylvania’s in its level of fentanyl contamination? 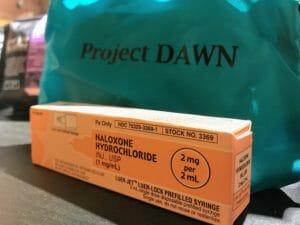 If about 3% of the cocaine supply contains fentanyl, Ohio’s 164,000 annual cocaine users are playing Russian roulette with 1 bullet in a 33-chamber gun. Cocaine users (and their friends and family members) are less likely than heroin users to have  naloxone on hand, making fentanyl overdoses especially dangerous.

Also, the fast increase in cocaine-fentanyl mixes is worrisome. Perhaps 3.2% from early 2017 will be 5% in 2018. Perhaps Ohio cocaine was at 6% fentanyl in 2017 and has since trended higher.

These important facts should be known but aren’t.

Ohio is not in the middle of an opioid epidemic. We are in a drug overdose epidemic. The entire illegal drug supply, except marijuana, is contaminated from impurities that are the inevitable, unavoidable result of prohibition. Ohioans are dying in extraordinary numbers. History will not be kind to us.