Ohio Overdose Catastrophe: May 2020 was the deadliest month EVER in Ohio

Overdose deaths exceed 500 in a month for first time

Overdose death surge continues unabated since then in Ohio

More Ohio residents died from drug overdoses in May 2020 than in any month in Ohio history. The record-breaking death toll appears to be linked to stress, job loss and social isolation caused by the COVID-19.

Preliminary Ohio Department of Health mortality data show that at least 543 Ohio residents died of drug overdoses in May 2020, exceeding the previous high of 484 deaths in January 2017.

This is the first time Ohio’s overdose death toll has exceeded 500 in a single month. The death toll of 543 for May will likely increase somewhat as additional overdose fatalities from across Ohio are documented and entered into the state’s mortality data.

The state added 40 confirmed overdose deaths to mortality data this week (ended November 9, 2020), bringing the documented overdose death toll to 3,211 statewide. At this pace, 2020 will come close to (and possibly exceed) the horrific record of 4,854 overdose deaths in 2017.

It’s unclear if May and June were a horrific anomalies or if the record-breaking level of overdose death will continue in Ohio through all of 2020. What is known is this year’s death surge has occurred broadly and statewide, spanning all of Ohio’s geographic regions, touching all demographics groups and affecting big cities, small cities and rural areas. 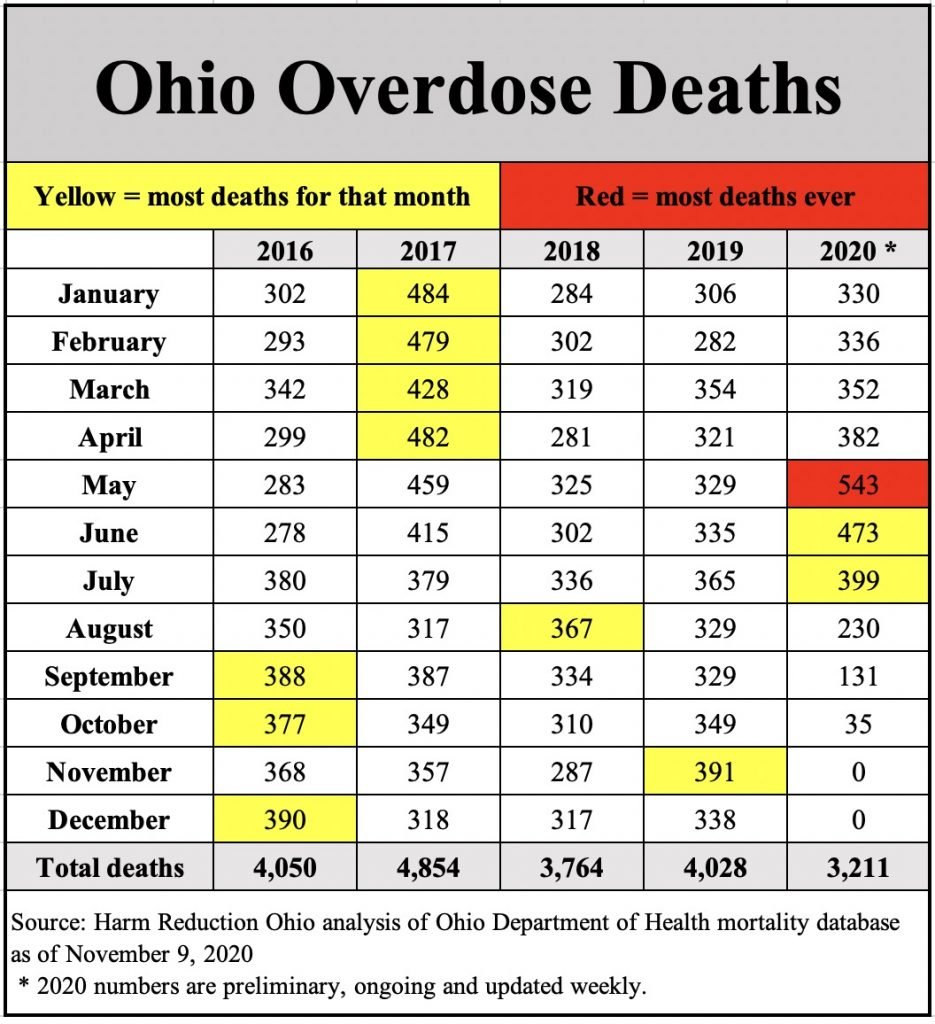 A list of county overdose rates can be found here.

The final death toll for 2020 won’t be available until the fall of 2021. About 90% of deaths in Ohio are recorded in the state mortality data within four months. However, some cases take longer to code and enter into the mortality data because causes of death can be complicated to determine. Also, some counties delay filing death certificates for various reasons, such as awaiting toxicology results. Of the 64 overdose deaths added to the mortality data this week, one was from January and four from February.

(The 2019 death toll is complete but has not yet been officially certified as final by the state.)

In Ohio, overdose death rates fluctuate, often dramatically, both up and down, month-to-month and even week-to-week.  It’s impossible to predict if things will get better or worse, so it’s unclear what is happened now, statewide, in the second half of 2020.

However, at the current pace of death, 2020 could be the deadliest year in Ohio history for drug overdoses. That’s saying a lot considering the horrific overdose levels of 2016 and 2017 when fentanyl, carfentanil and various analogs expanded rapidly throughout the state’s drug supply.

Since 2015, all significant changes in Ohio’s overdose death rates have been caused by changes in the chemical composition of drug supply — i.e., the introduction of fentanyl, then carfentanil, then the spread of fentanyl and its analogs into cocaine and other drugs. Despite the state’s emphasis on treatment and prevention, drug use levels in Ohio are largely constant and shift only slowly, over time.  The chemical composition of the drug supply — how much cocaine contains fentanyl, for example — is what changes quickly and drives overdose death rates up and down.

(Harm Reduction Ohio tracks the changing composition of the state’s drug supply by analyzing drug seizure data provided by the Ohio Bureau of Criminal Investigations crime labs. Many stories on our web site document this phenomenon, including this recent one.)

However, this spring’s overdose death surge — especially the historic jump in death that occurred in May — appears to be related to COVID-19, rather than changes in the contents of the drug supply. HRO’s most recent analysis of drugs seized across Ohio by law enforcement so (and analyzed by the three BCI crime labs) shows no changes in Ohio’s fentanyl-heavy drug supply that would explain nearly 500 overdose deaths in May.

The most likely explanation for May’s death toll is that it was driven by stress, job loss and social isolation related to the COVID-19 pandemic. Reduced access to medication-assisted treatment and naloxone may also have played a role.

No data yet exists supporting the idea that covid-19 has spurred changes in drug use levels or patterns. However, many anecdotal reports from people who use drugs support this theory.

What is known for certain is that overdose death broke a record in Ohio this May, during the heart of the pandemic, and remain tragically high. There is no evidence that Ohio is succeeding at reducing drug overdose death or even making notable progress.