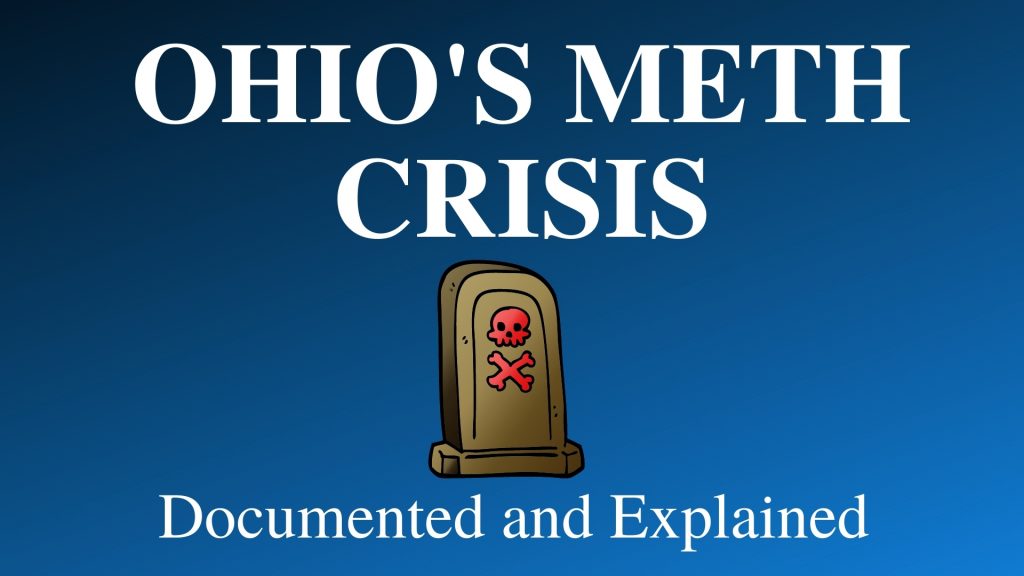 Fentanyl in meth is primary cause of death

Methamphetamine overdoses are claiming a record number of lives in Ohio.

Meth has been involved in 25% of Ohio overdose deaths so far in 2021, up from 21% last year and just 3.1% in 2015. Nearly 80% of meth-related overdose deaths also involve fentanyl or a fentanyl analog, meaning that fentanyl-laced meth or the mixing of the two drugs by consumers is the primary force driving meth overdose deaths. 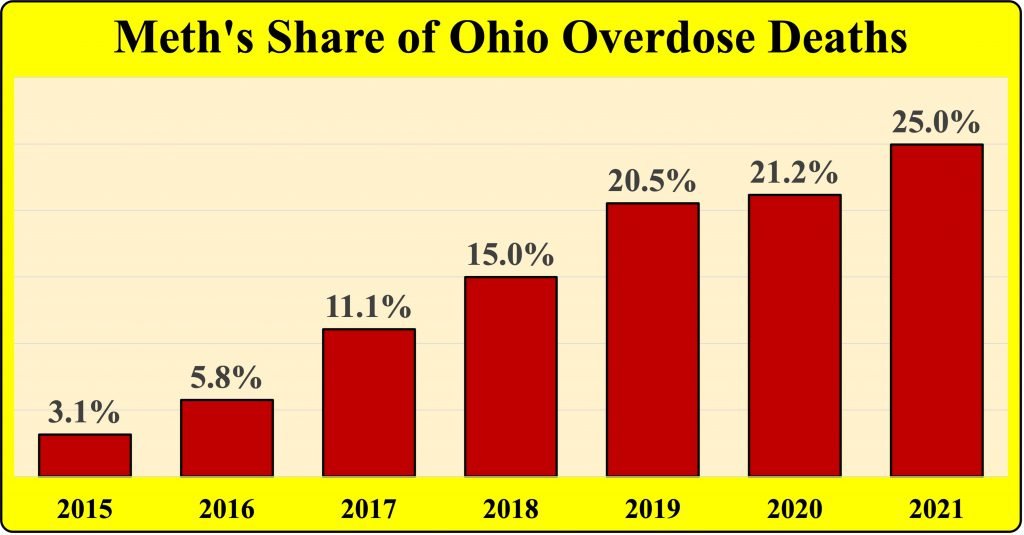 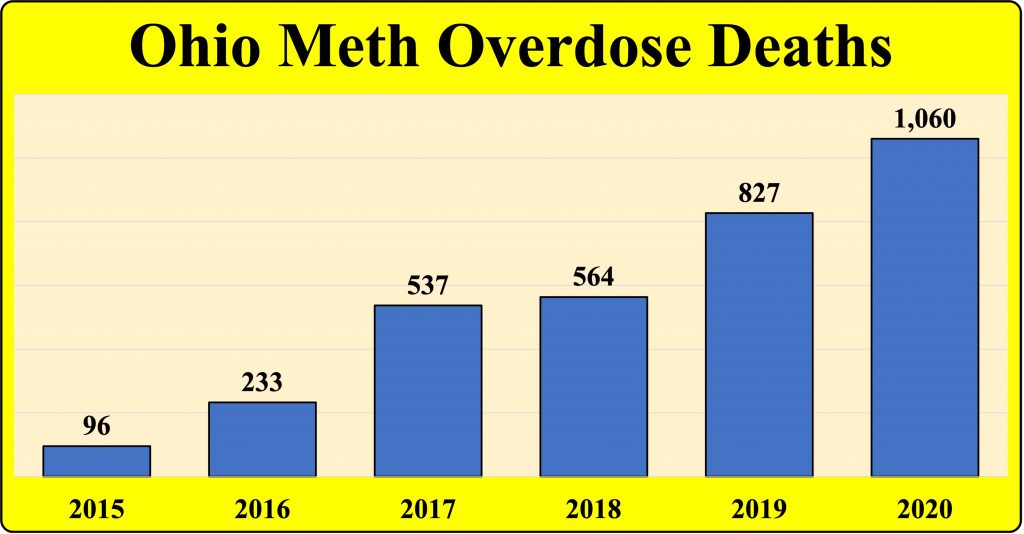 The first thing to understand is that people who use meth, a stimulant, are dying at extraordinary rates but it is mostly fentanyl, an opioid, that is killing them. Thus, the first priority to reduce overdose deaths is (1) to make sure people who consume meth understand they should carry naloxone, the opioid overdose-reversing drug and (2) get naloxone (Narcan) to people who use meth frequently or infrequently.

Harm Reduction Ohio, the state’s largest naloxone distributor, has made some efforts to increase naloxone possession among Ohioans who use meth but nothing on the scale needed, largely because most funding in Ohio (and funding HRO receives) is directed at helping people who use opioids. As far as HRO knows, no Ohio institution — not the state nor a private institution — has supported a significant effort to prevent overdose death among meth users.

What both trends have in common is that stimulants adulterated by or used with fentanyls are driving overdose death in Ohio — and have  done so for the last several years. While it is technically true that most of these deaths are caused by an opioid, we need to focus on the drugs that people intended to use. Methadone, buprenorphine and Vivitrol  don’t work for meth or cocaine users. We need to focus on the perspectives, needs, behaviors and cultures of the individuals involved and stop lumping all fentanyl-related overdose victims into a big pile inaccurately labeled “the opioid problem.”

How connected: Opioid and Meth 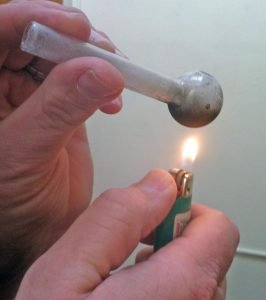 Opioid use and meth use in Ohio are connected in often subtle, indirect ways. Many opioid users started to shift to meth a few years ago as a safety mechanism, as a way to avoid fentanyl and its analogs. The habit of injecting drugs followed this shift so today a good share of meth users inject the drug, having become acclimated to injecting from earlier heroin use. In “the old days” of meth use in the 1990s, injecting meth was rare.

We must also remember that meth is the cheapest of all drugs, especially when its long-lasting effect is considered. In that sense, it’s a “good value.”

And even today, some meth users intentionally take both meth and opioids to offset the effects of each. Meth makes you energetic and opioid makes you chill. Sometimes use will occur at the same time (a “goofball,” as the mix is sometimes call vs. a cocaine-opioid “speedball”). Sometimes meth users will take an opioid at the end of an experience to try for a gentle let-down.

The overdose risk is high in all these situations because a regular opioid user builds up considerable tolerance to fentanyl doses. A meth (or cocaine) user, even one who used to use heroin or fentanyl, may have little or no tolerance. For these “opioid naive” consumers, a little fentanyl is probably killing a lot of people. A heavy opioid user can likely consume 250 micrograms of fentanyl and still go about his or her daily business. But a person without opioid tolerance may overdose on 50 micrograms of fentanyl, especially if it’s injected. 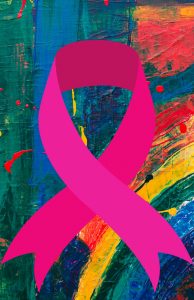 To reduce overdose death significantly in Ohio, we have to start thinking about overdose death as we think about cancer: as several fundamentally phenomena, even though overall concept may be the same.  Breast cancer, prostate cancer, lung cancer and so on have different causes, effect different groups disproportionally and are treated differently.

Today, we lump overdose deaths, drug use, people who use drugs, an extraordinary range of experiences and motivations, and much more into one criminalized clump. When it comes to drugs, we don’t need to think about more shades of gray. We need to think of drugs and people who use them on a full color spectrum, including hue, brightness, saturation, intensity and more.

In nearly every conversation about overdose that occurs in Ohio — not to mention how nearly all money is spent — you realize most Ohioans are living in the 2015 world of accelerating heroin use or even the 2010 world of heavy prescription opioid use. That reality isn’t true today and throwing billions of dollars (indeed, hundreds of billions of dollars) at a problem that was once sorta true but is way off-point today won’t reduce overdose death today because right answers don’t have much value when they answer the wrong questions.

The point of this article is modest: To encourage you to start thinking about Ohio’s meth overdose problem, a problem of meth users dying mostly from opioid overdoses.

A good place to start is where the problem is worst, i.e., where meth overdose death rates are highest. This map shows the 10 counties with Ohio’s highest overdose deaths rates. 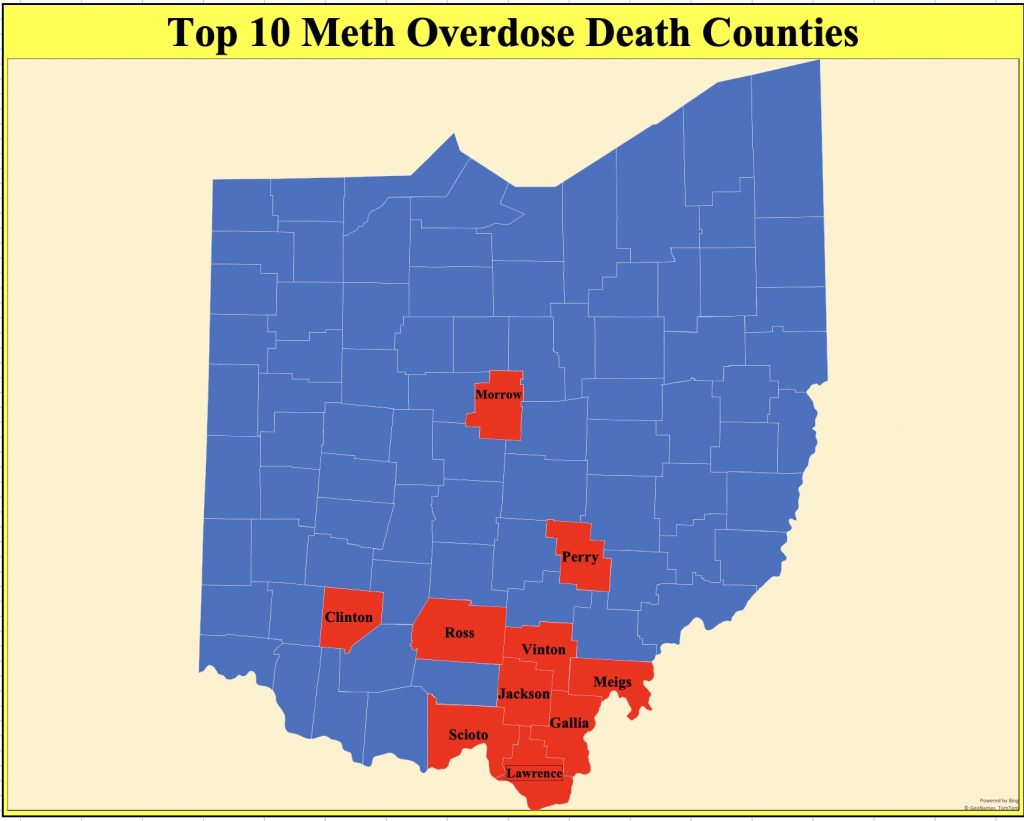 Of these counties, only one — Scioto — is getting any of the extra 25,000 Narcan kits the state of Ohio is directing to supposedly high overdose areas as part of a “targeted” naloxone blitz. The state swung and misses at reducing overdose deaths in the $2.5 million naloxone blitz now underway. (Note: Harm Reduction Ohio is receiving 4,500 Narcan kits under this program and will target the areas shown in red for increased naloxone distribution, especially aimed at meth users.) 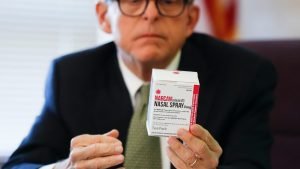 Oops. Swing and a miss.

The state’s bungled “targeted” naloxone program is an example of how Ohio thinks it’s still 2015 or 2010 when it comes to overdoses. 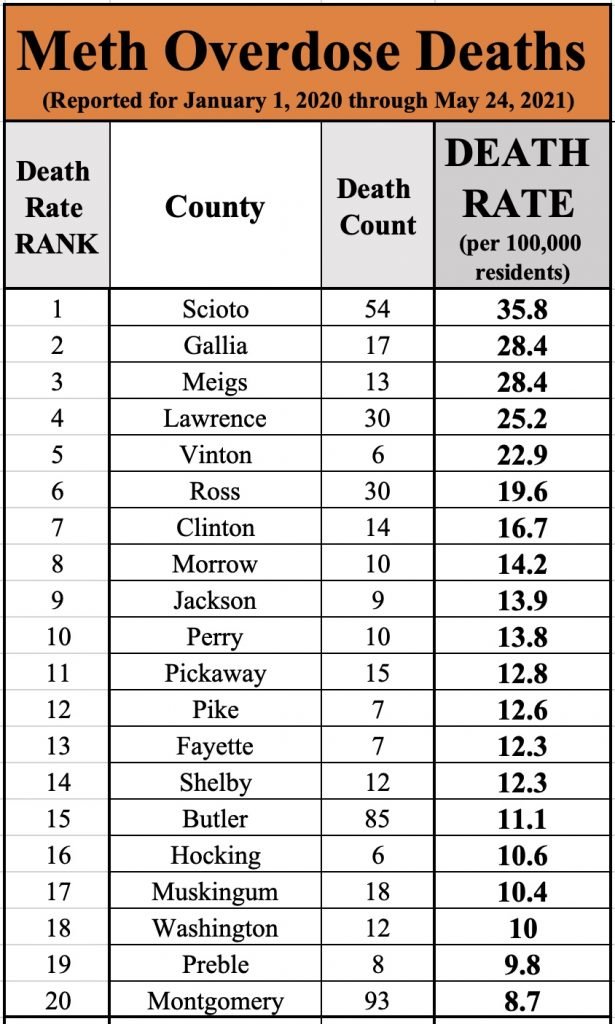 The increased of fentanyl test strips by people who use meth would be a good start. Although meth-fentanyl is killing a lot of people, only about 5% of meth has fentanyl it. That’s much less than cocaine or heroin. 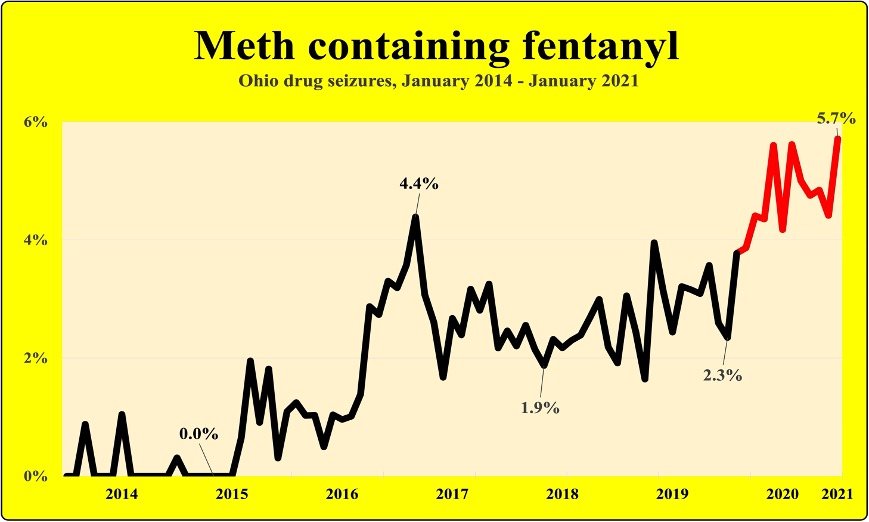 Safe use kits would be valuable, too. It would prevent problems that accompany unhealthy meth use as well as start people who use the drug to thinking about their health and manageable steps that can be taken to preserve health even while in active use.