A Love Story: Beth Curtis, the Mother Theresa of Marijuana and the hidden gem of Zanesville, Ohio

Read about a life well-lived…

…and an unexpected romance.

BONUS: At bottom of story, meet some of the people she helped free from life sentences for marijuana. 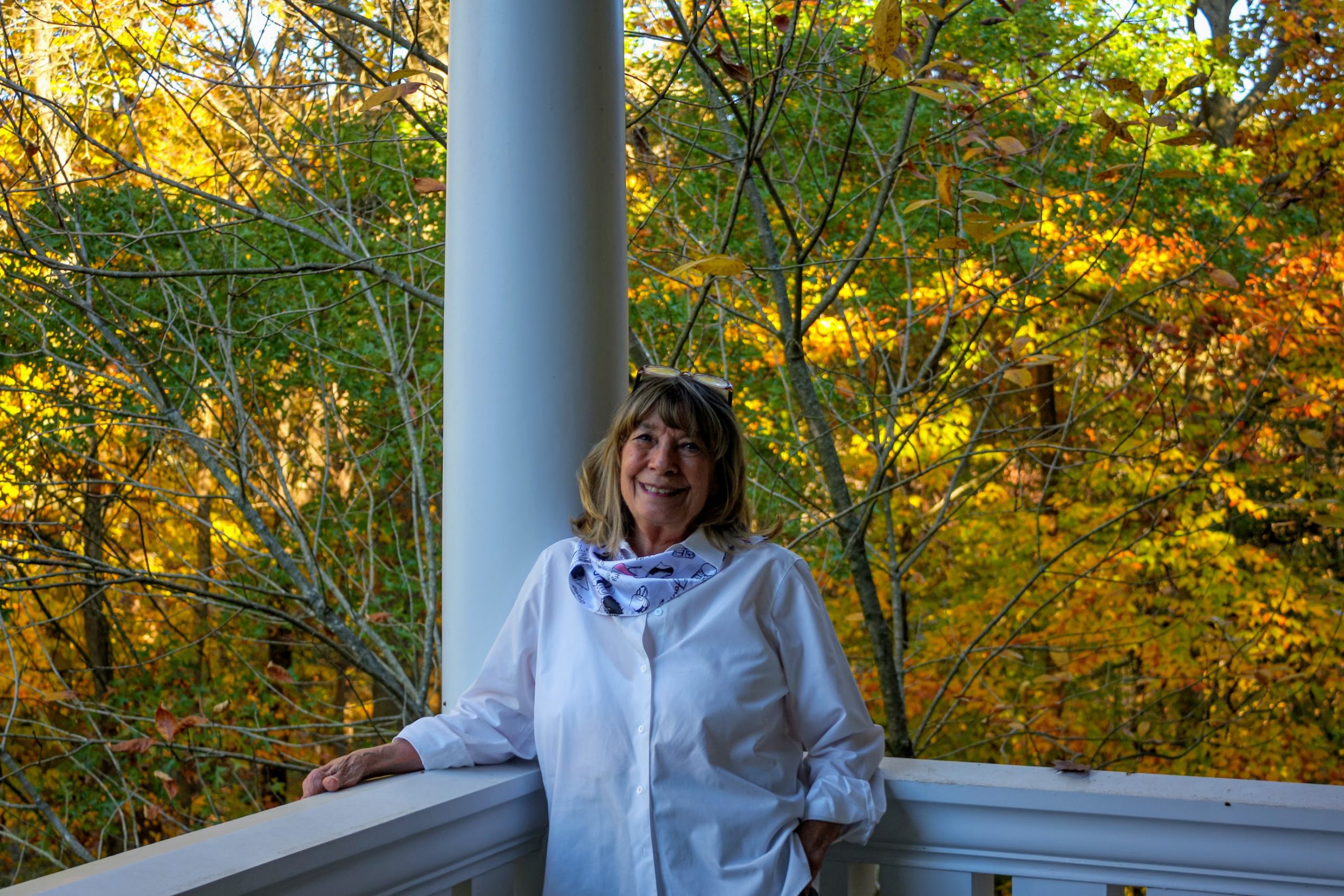 Every year, during each national holiday, Beth Curtis of Zanesville, Ohio, places a stack of cards on her otherwise cluttered work desk. On the front of each card are photos of people who have been sentenced to a life in prison for marijuana.

The addresses on the envelopes belong to senators, state representatives and lobbyists that Curtis wants to nudge towards the goal of marijuana legalization and lowered marijuana sentences.

Curtis, now 80, and founder of the national advocacy group Life for Pot, has been working from her home in Zanesville for 28 years with the mission to set marijuana lifers free. In that time, the “Mother Theresa of Pot Prisoners” has had success in helping to free more than 25 previously incarcerated marijuana offenders. While she’s undoubtedly changed the lives of many people, her life has also been altered in the process. Her dedication has brought both love and heartbreak through the people she’s come to know who have been at the mercy of a system plagued by hypocrisy and injustice.

Curtis’ unique strategy to bring attention to her cause is one based on love, attention to detail and persistence. She hand-addresses every envelope and uses real stamps – a task that consumes hours upon hours every year.

“I know how I sort my mail—and it’s really quick. No stamped envelope? It goes straight to the trash.” She pauses and starts laughing to herself. Then, she puts her thumb and pointer finger in front of her face and twists them ever-so slightly to the right. “And… a stamp that’s slightly askew.” She burst out in laughter.

Curtis knows that if it looks like a real letter, there’s a better chance that someone who matters will open it—and that’s worth the hours upon hours she spends doing mailings every year.

That’s the kind of person Beth Curtis is: the kind that plays the long game and is willing to persist to reach her goals. Throughout her life, she says “Whatever I did, I did it. I cared about not just drifting through.”

Advocate in the Making 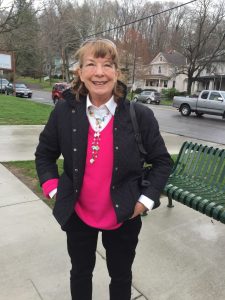 Before 1994, Curtis’ life wasn’t boring, but it barely resembled how she’s spent the past 28 years. Curtis was born in Nebraska in 1941 and led a relatively conventional life. She went to college in Ohio, eventually graduating from Ohio State University with a master’s degree in social work. She married an oral surgeon, had three boys and spent her time helping run her husband’s medical practice.

“My life was fun. I had an interesting life. I was on school boards, and the health service board with the hospitals, and the art center board.”  Her best trait, she says, was her ability to network. “I’m not obnoxious. I’m interested. And I’m a good researcher.”

While these traits helped her to climb various social ladders in Muskingum County, unbeknownst to Curtis, they would become crucial after her brother was sentenced to life in prison for marijuana.

Even more important than Curtis’ networking skill was her early understanding of the internet. Curtis bought her first computer in 1986 and used it to organize and manage the finances of her husband’s medical practice. “I was doing investing for a pension plan and a profit-sharing plan for a lot of other people,” she says. Her goal, she says with a laugh, was do no harm to the employees’ retirement plans. But now that Curtis looks back on it, she realizes that in the early days of the internet, she had access to information that wouldn’t be available today. “There weren’t firewalls at that point, so I could find papers in Singapore,” Curtis says. The scope of information available at her fingertips was breathtaking.

Then, in 1994, an event shook her to the core. Curtis’ brother, John Knock, was indicted. However, no one knew where he was, what he’d been indicted for, or how to help him. So with her background in financial research, Curtis transitioned from medical practice finance to looking for clues about her brother. She began searching for where he was, trying to contact his attorney, looking into who else was involved. 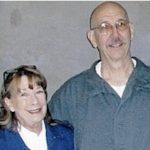 John was arrested in Paris in 1996.  He was extradited to the United States in 1999, went to trial in 2000 and was sentenced to two life terms plus 20 years — all as a first time nonviolent marijuana offender.

Once she discovered that her brother had been sentenced to a life without parole for a nonviolent marijuana smuggling conspiracy charge, she was shocked. It was surprising to her not only that he had been arrested for marijuana charges, but also that he’d been given a life sentence in federal prison.

As Curtis delved deeper into her brother’s case, she found more people who’d been sentenced to life in prison for nonviolent marijuana offenses. At first, she was a hesitant activist. “First of all, I thought I may not find any (marijuana lifers). Secondly, I thought, as soon as people know about this, something will change,” she says.

New Quest: Justice for All

Things quickly shifted from one case—her brother’s—to multiple “life for pot” cases. Curtis’ mission to set them all free began.

“People told me they’d never be out. No one thought clemency would work for people with life sentences,” Curtis says.

However, her brother John was officially granted clemency in January of 2021. She was not deterred then, and still isn’t years later.

Curtis’ passion is driven by the hypocrisy she sees in marijuana being a legal business in much of the country while peaceful people who’d been in the same business are served life sentences. This hypocrisy-driven injustice is one reason why she doesn’t mind spending hours writing letters, showing up unannounced at representative’s offices in Washington D.C., and advocating for clemency on behalf of people she’s never met.

“There’s no integrity in the business as long as people are still incarcerated for the same thing,” Curtis says. “Marijuana is as illegal now as it was when these people were sentenced. It’s still… a Schedule 1 drug. (The federal government) lists it as more dangerous than fentanyl and Oxycontin, and yet people are making billions of dollars as a business… And it’s hard not to express rage.”

During her 28 years advocating for nonviolent marijuana offenders, Curtis has gotten to know the many people who she’s helped free…and fallen in love with one of them. The release of marijuana lifers from prison has been exciting for Curtis.  It’s also made her familiar with the devastating effect prison can have on the soul and well-being of people who are locked up and their families.

Yet, sometimes, love shines through the darkness.  And, for Curtis, a widower, her work against injustice led to late-in-life romance. 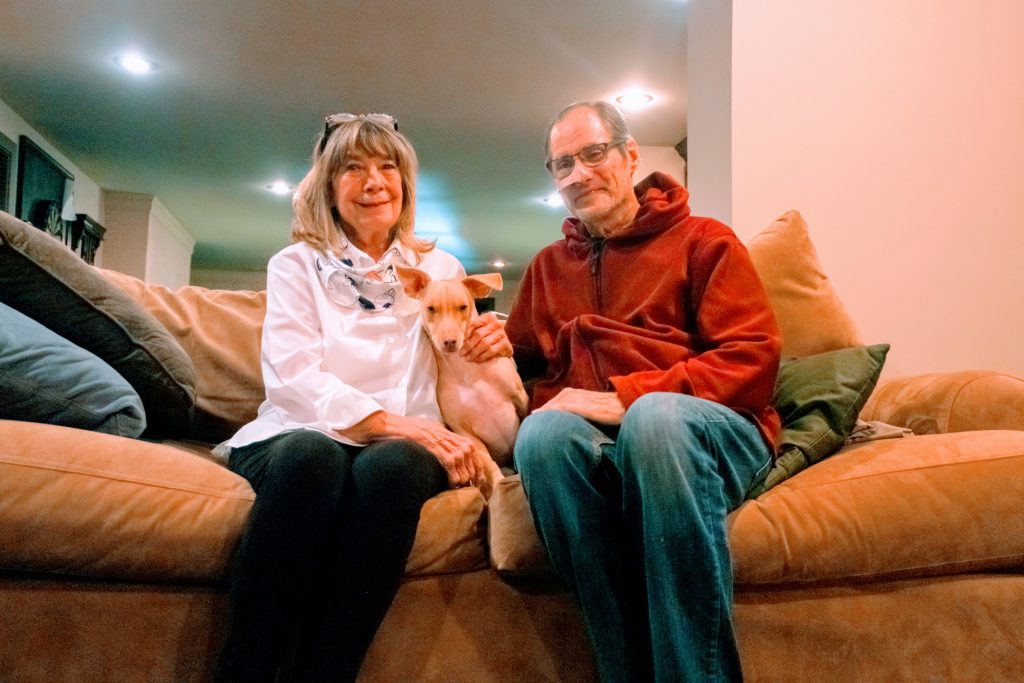 Paul Free, one of the marijuana offenders that Curtis helped get clemency in 2016, has now known Curtis for 14 years. She began writing letters to him in 2008 because he fit the category she was seeking clemency for—nonviolent marijuana offenders over 60 years old that have life sentences.

Free was born in Coronado, Calif., in 1950. Before he was indicted, Free was two credits away from earning a teaching certificate. While in prison, Paul continued teaching to help other inmates gain their GEDs. He also assisted other inmates with legal work, helping multiple people to reduce their own sentences. 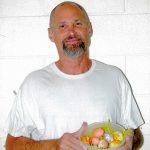 After he was released from prison in October of 2019, he and Curtis quickly met in person, and she helped him to get back on his feet. Still, Curtis continues to help him navigate the long-lasting effects of prison that remain with him as a free man; effects that she’s seen in almost every formerly incarcerated person she’s worked with. “They haven’t had glasses, new lenses for 20 years, something like that. They can’t hear because they don’t have hearing aids. All kinds of medical stuff, all of them I know and advocated for, have it,” Curtis says. “You have to spend some time taking care of those things when you first get out. And that’s what he’s doing now.”

And since Paul has been released, the two have barely spent time apart. After some prodding, the Mother Theresa of Marijuana confesses — romance.

“I know it seems ridiculous, but I’m not dead yet,” she says  “Last winter we lived in a palapa that he built in Cabo (San Lucas, a resort in Mexico).It had no walls. My children just kept messaging me that there were hotels there that I might want to try.” But, when you’re with a man who spent decades in prison for a nonviolent offense involving a substance now legal in much of the country, “no walls” is a perfect environment.

What type of man makes Curtis happy today? Paul “never passes up an art gallery or botanical garden. Being free means that he can again see a sunset and sunrise, pet a dog and feed the birds.” After 13 years of separation, the two now experience every aspect of life together, and will be, according to Curtis, spending the foreseeable future side-by-side. “I love Paul and we intend to be together—he is my family,” she says.

In April, there was an event held in West Palm Beach for marijuana offenders to meet and celebrate their freedom—and to meet Beth. “It was like magic to see them,” she says. “We talked on the phone, wrote, everything.” But it was the first time they’d ever met each other.

“They’ll never forget her,” Free pauses. “There are tears in my eyes. It’s very humbling. When you have total strangers reach out to you, it affects you. It gives you hope for the world.” 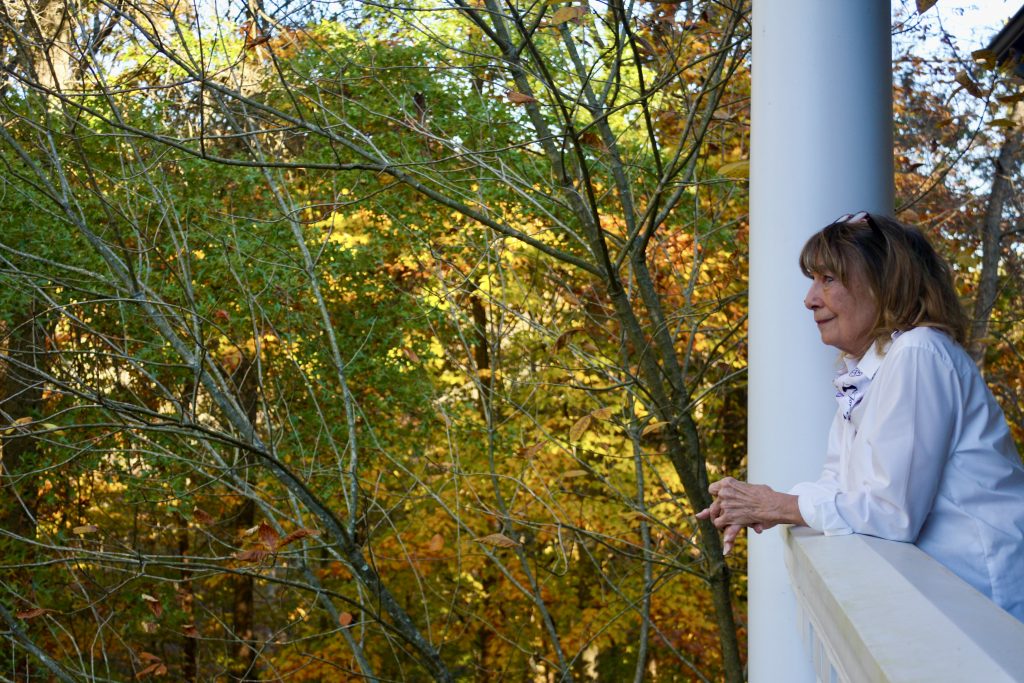 Beth Curtis, 81, looks toward the future

Twenty-seven years after his indictment, John Knock was granted clemency on January 20, 2021, by President Donald Trump. Knock is now a free man. In August of 2021, more than 40 of Curtis’s closest friends and family gathered to celebrate her birthday—and to reconnect with John after 26 years of imprisonment. John now spends his days in peacefully in Philadelphia with his wife and son.

Curtis is more tired than she used to be, but she hopes to soon pass down her work (and motivation) to someone new. Sitting in the back of her car are 20 banker’s boxes full of information and documents, ready for a successor to take the time and love to address a letter by hand and put on a stamp that’s slightly askew. 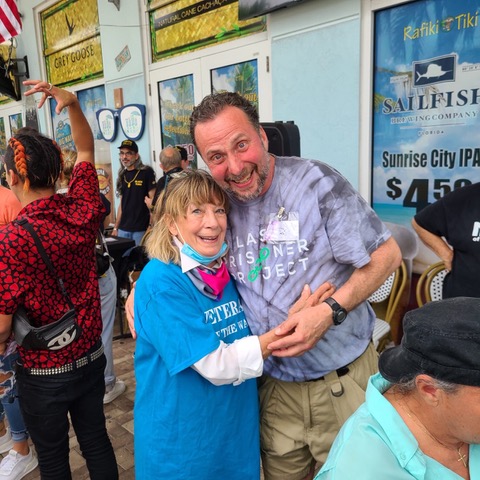 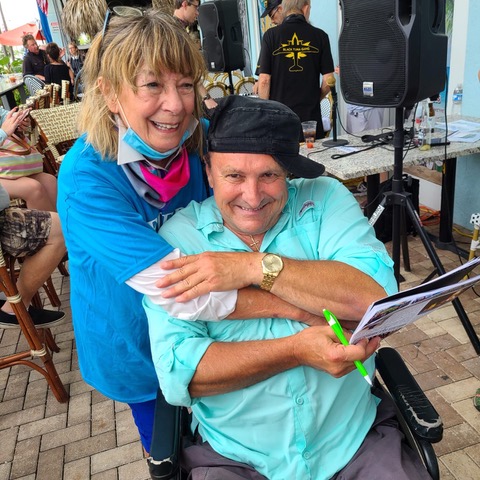 Michael Pelletier, a paraplegic since a farm accident at age 11 who used marijuana medically to treat pain and depression. 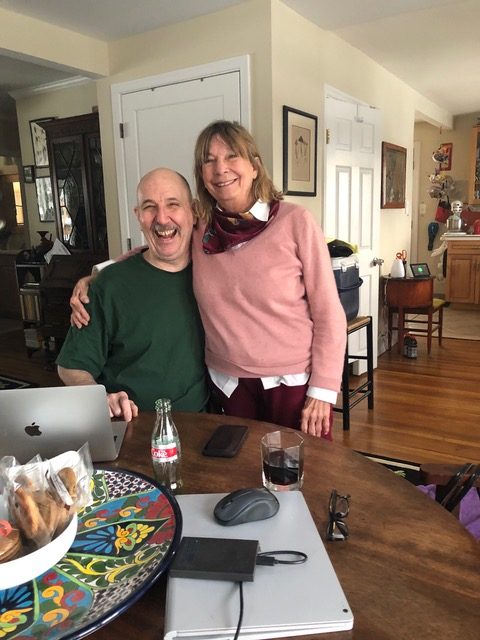 John Knock, her brother and father of son, Aaron. 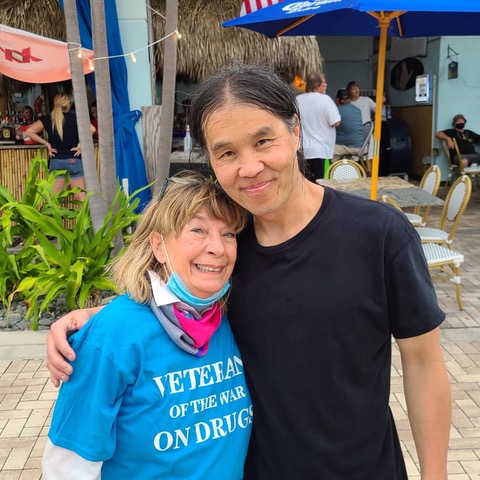 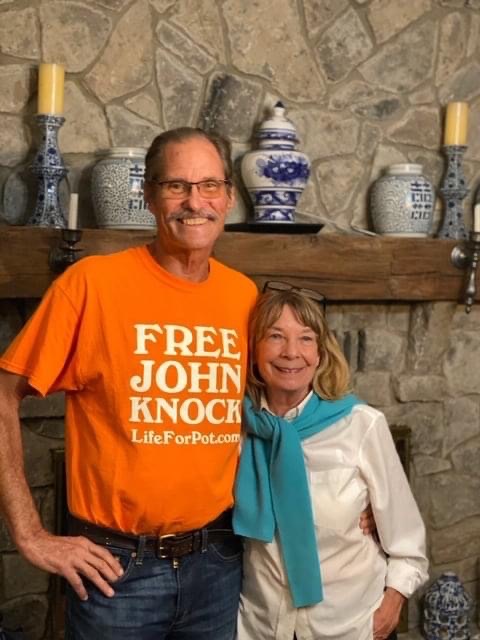 Paul Free, who earned a degree in marine biology before his arrest and is now her partner in love and life. 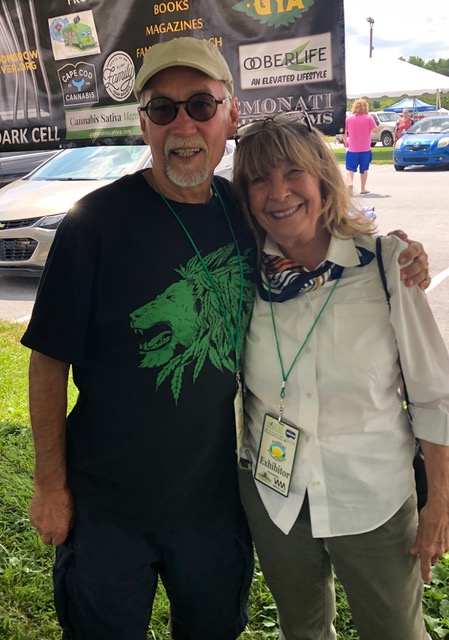 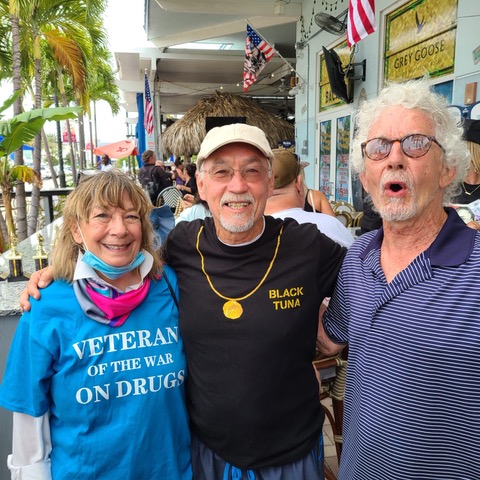 both Randy Lanier, a former race car driver, and Larry Duke, a carpenter, inventor and Marine before his arrest. 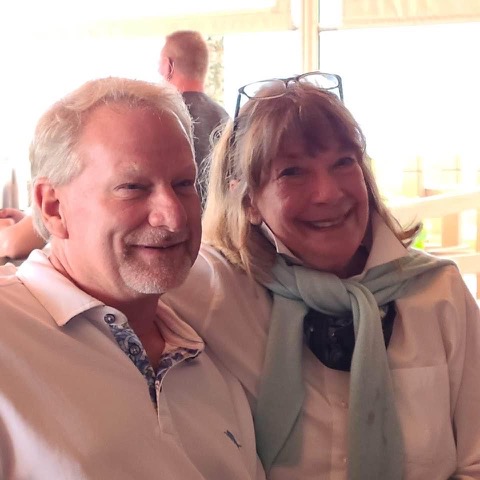 Andy Cox, a small business owner and father of three. 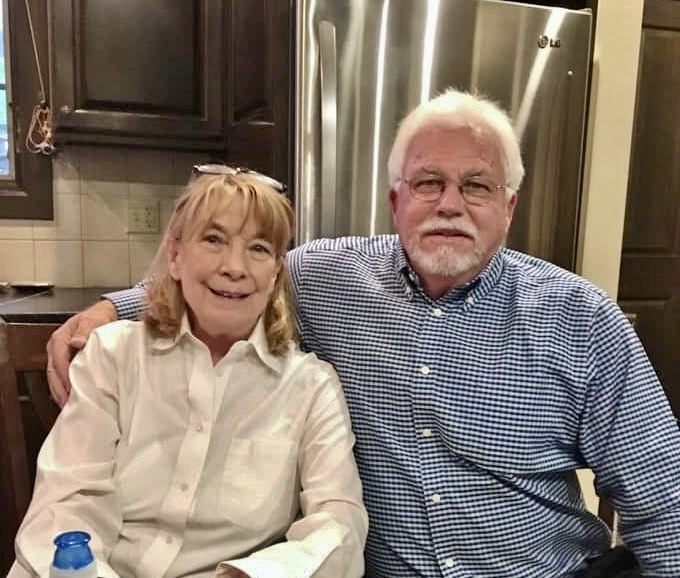 Billy Dekle, a pilot who served in the Marines.

...and gets a well-deserved hug! 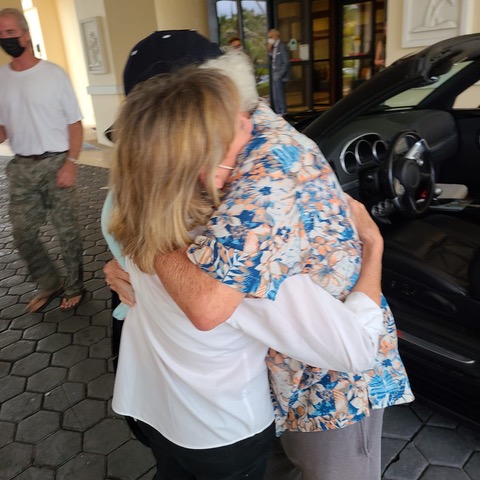 And some of the people she’s helped free from life without parole marijuana setnences.