First of its kind survey asks Ohio drug court participants what they think.

Most report positive results but … 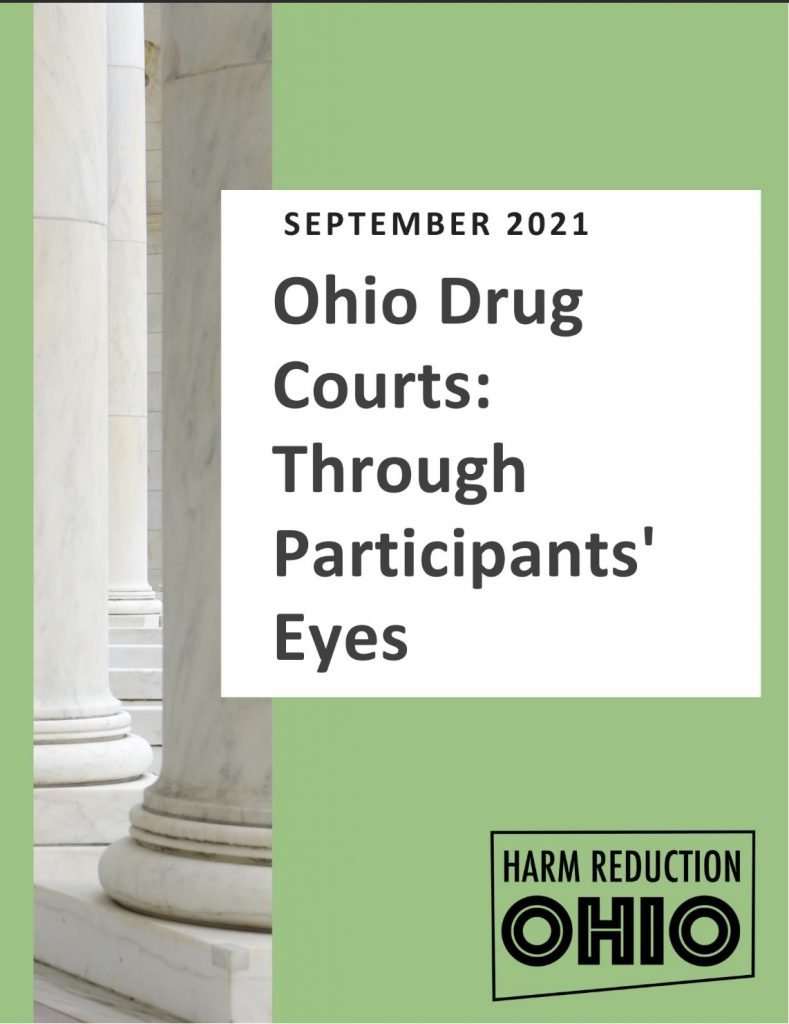 Ohio drug courts receive millions of dollars in funding and are revered across the state, yet they remain understudied. In a new report, Harm Reduction Ohio gives drug court participants a voice to explain how the drug court experience affected them. 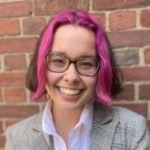 For this report, Harm Reduction Ohio’s Public Health Fellow Allie Mikolanis, a Geauga County resident now studying at Wellesley College in Massachusetts, conducted a survey of 105 drug court participants from 36 Ohio counties and interview 18 of them in depth. Her findings were complex and nuanced. The full 37-page report can be read here.

“There is no one common narrative for drug court participants: each program varies, so each experience is different,” Allie says. “However, while drug courts have the potential to positively impact their participants, there is still an overarching need to integrate harm reduction into drug court programs. ”

She adds: “Drug courts also should be subject to greater accountability to reduce bias, and there needs to be greater research into their long-term impacts.”

A majority of respondents reported that drug courts were positive experiences overall and, on net, resulted in lower levels of drug use after the court experience.

However, Ohio drug courts’ focus on abstinence may have deadly consequences for people who can’t or don’t conform to the rigors of drug court programs.  Most participants knew someone from drug court who had died of an overdose. Of those who knew fatal overdoses, respondents reported knowing an average six drug court participants who had died from drug overdoses. Dead people don’t respond to surveys, so this report cannot fully capture the most negative results that occur in drug courts.

Abstinence-only treatment programs and forced abstinence from jail terms have been found to significantly increase overdose death rates when compared with medication-assisted treatment with Suboxone or methadone. Ohio drug courts’ emphasis on abstinence may result in increased overdose death even while reducing drug use in other participants.

Only about one fourth of participants reported that naloxone, the overdose-reversing drugs, was provided by drug courts. Increasing drug court-provided naloxone could be a major step to reducing overdose deaths in Ohio’s abstinence-heavy drug court system. 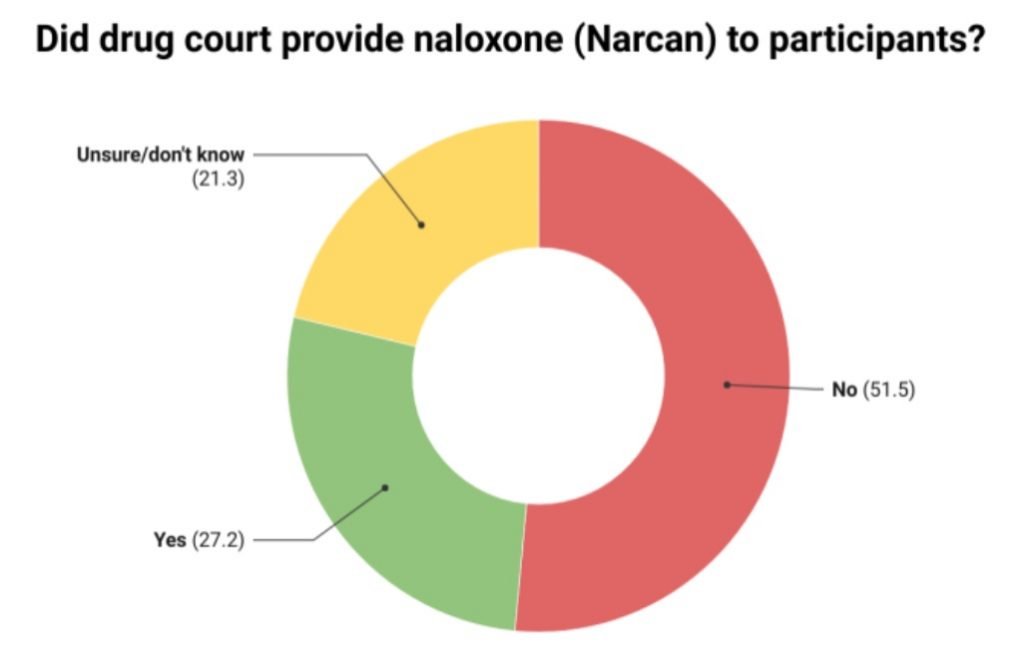 Other recommendations to improve drug courts:

In her first drug court experience, she was kicked out of the drug court after using drugs. The probation officer told the judger there was “no hope” for her and that she “just wants to die.”

This was deeply traumatic for her. She felt no support on encouragement in the program.

Her second drug court experience was entirely different and, she reports, saved her life. The judge told her “(she’s) going to be somebody someday” and that he would not give up on her. Her caseworker provided crucial support, guiding her to stability — a home, a car, a driver’s license — that she lacked when she entered drug court. She now work as a residential assistant at a sober living facility.

However, another participant noted that drug court’s heavy demands — such as attending 12-step meetings every day for 30 days — made it hard for people to stay employed and maintain financial stability. She said many people were not honest with mental health providers provided by drug court because they functioned as the “long arm of the law.”

Indeed, 46% of drug court respondents report that they continued to use drugs while in drug court. Many reported switching drugs to substances that wouldn’t be detected in drug screens.

One participant called drug court “one of the most stressful and useless experience in (my) life.” They were discouraged from using Suboxone, a medication-assisted treatment that has been shown to reduce overdose death and other harm results for people struggling with opioids. The drug court’s treatment team lacked empathy or understanding of participants’ lives, they said. Indeed, the treatment team put them in jail, where they were denied prescribed mental health medications.

Join Allie Mikolanis and others for a Zoom discussion of drug courts and participants’ real-world experience on Monday, October 11 at 7 p.m. 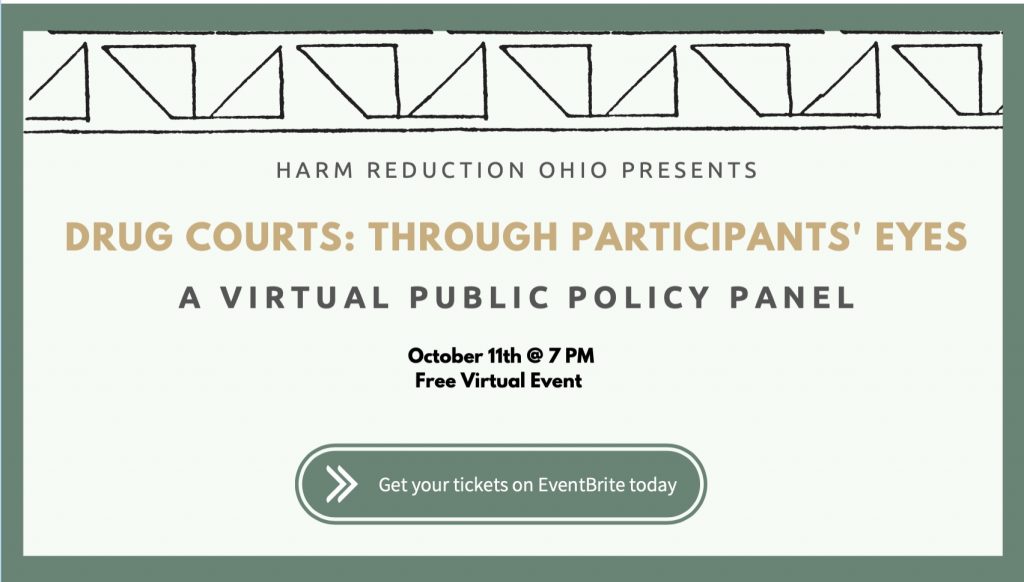