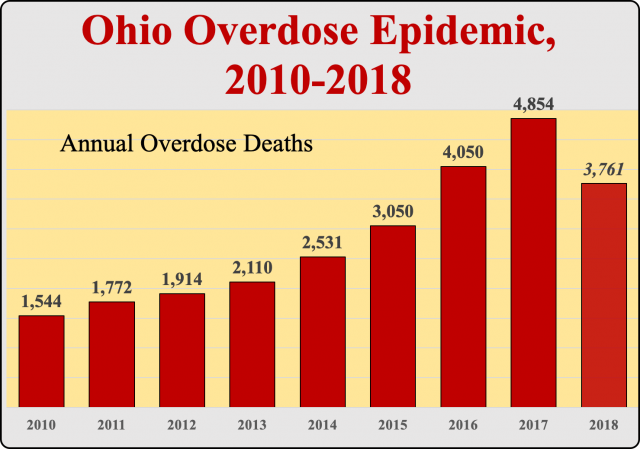 How many Ohioans died of drug overdoses in 2018? We get asked that question almost every day.

The death toll is probably final but may change slightly if some ambiguous cases are revised.

Annual numbers can be a little deceptive because overdose trends change fast. Overdose deaths began declining sharply in Ohio in the summer of 2017 and throughout 2018. But early data seem to show that overdose deaths appear to have began rising again in January 2019 or perhaps December 2018. Drug seizure data show carfentanil has returned to Ohio and may be causing the rise in overdose deaths.

All illegal drugs except marijuana are extremely dangerous in Ohio. Ohio residents have a history of adding more fentanyl analogs (especially carfentanil) to our illegal drug supply than anywhere else in the USA. (Most fentanyl adulteration happens here, in Ohio, not in a foreign land. If you’re interested, see stories on here, here and elsewhere.)

ALL drugs in Ohio — except marijuana — may contain fentanyl or an analog. This includes (in order of likelihood) heroin, cocaine, meth, benzos and MDMA. Overall, fentanyl and its analogs were involved in 73% of 2018 overdose deaths, about the same portion as in 2018.

Marijuana is safe. Fentanyl-laced marijuana is a myth, despite repeated reports by people who should know better.

If using anything other than cannabis, you can reduce your risk of dying by following these harm reduction practices:
* Use fentanyl test strips, especially on cocaine, meth and fake pills.
* Take much, much smaller doses (or none at all). You can always consume more; you can never consume less.
* Never use alone.
* Always have naloxone around, even if you don’t use opioids.
* Avoid alcohol, especially when consuming benzos and heroin.