Nitazene opioids in Ohio’s Drug Supply: How big a problem?

No change in overdose death noticeable

I was on a call recently in which people were concerned about isotonitazene. In response, HRO did this short report on nitazenes, a class of opioids that includes isotonitazene. — Dennis Cauchon, President, Harm Reduction Ohio

Nitazene opioids are a class of drugs first synthesized in the 1950s. Although still relatively uncommon in Ohio and the United States generally, nitazenes have increased in frequency since 2019 and may (or may not) become common in the drug supply.

Most nitazenes come from Eastern Europe. More than a dozen nitazene variants exist. The drugs are not well studied. Some are believed to be more powerful than fentanyl, others less powerful, some about the same.

So far, the increase in the frequency of nitazenes — to about 1% of Ohio’s drug supply in 2021– has not had any obvious effect on our overdose death rate, either up or down. However, the effect of nitazenes may have been obscured over the last three years by even larger increases in the frequency of fentanyl and fentanyl analogs during the same period. In 2021, 26.4% of drugs seized in Ohio contained fentanyl or a fentanyl analog versus 1.1% containing a nitazene.

Overall, the pace of overdose death in Ohio has declined modestly since September 2021. (Deaths remain near historic highs, though.).

The following charts show the frequency of fentanyl (including analogs) and nitazenes (by type) in the Ohio drug supply. The data is derived from more than 93,000 non-cannabis drug samples seized by 900 law enforcement agencies in Ohio counties and tested at Ohio Bureau of Criminal Investigation crime labs. (BCI crime labs do not test marijuana seized by law enforcement.) 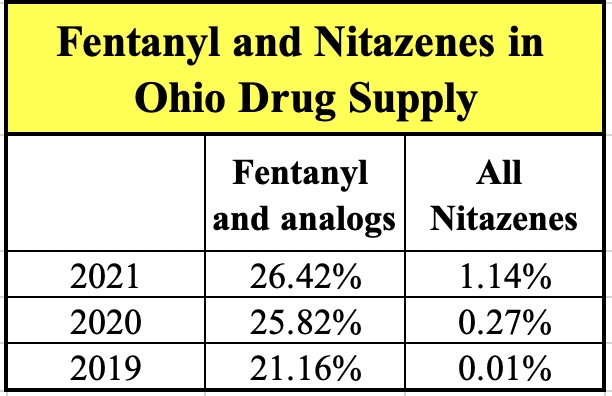 It’s important to not get distracted by scare stories about new or returning drug variants. Illegal drug markets change quickly and in hard-to-predict ways. Focusing on the latest “shiny new object” usually districts us from real risk (i.e., fentanyl).

That said, the frequency of nitazenes should be monitored closely — and Harm Reduction Ohio will do so.

Emanuel Sferios, founder of the DanceSafe drug checking service, is an especially astute observer of drug trends and danger. “I’m personally concerned about the nitazenes,” he says. “They appear to be sticking around. Depending on their ease of manufacture and other factors, it’s possible they could capture a substantial share of the fentanyl market within the next few years.”