An HRO intern walks into a bank…and finds legal marijuana. 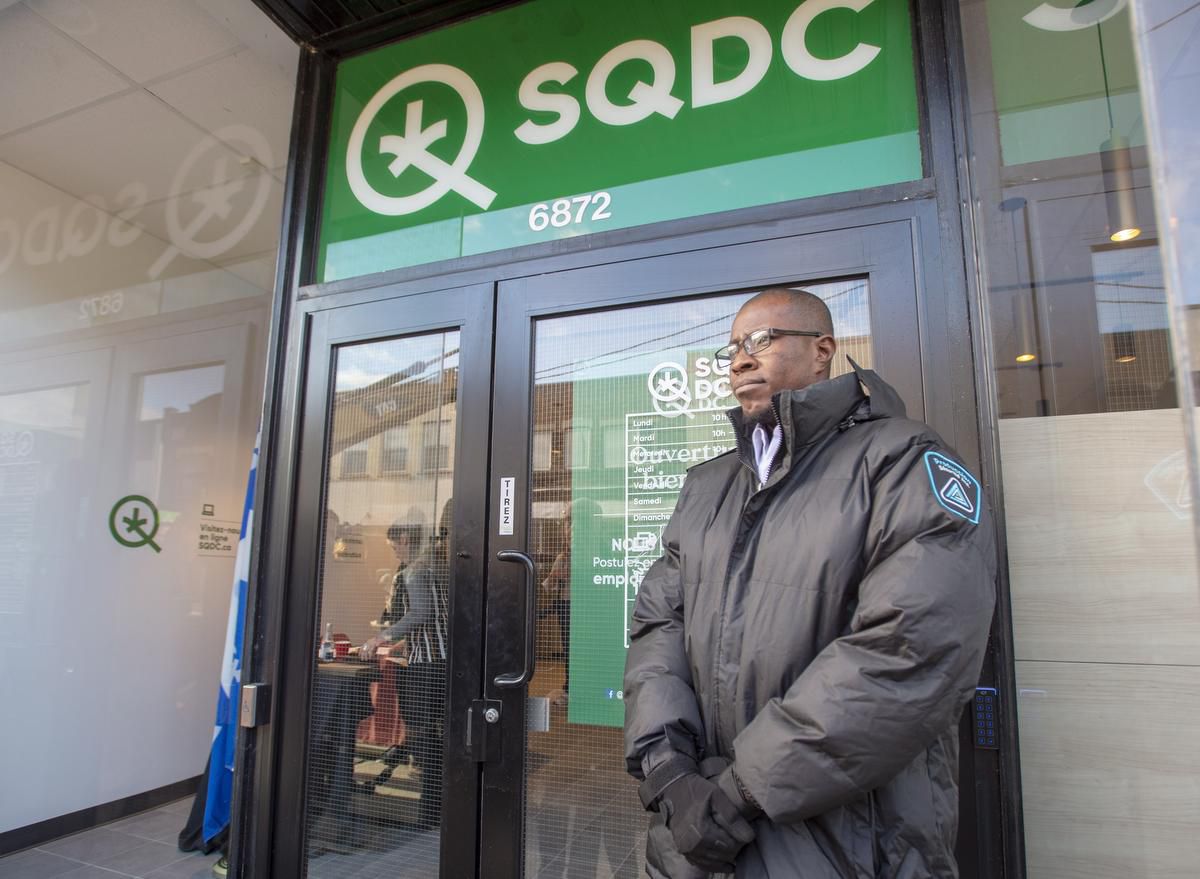 A week ago, while sightseeing on vacation in Montreal, I accidentally walked into a marijuana dispensary.

This was my first trip to Montreal, and I was exploring randomly, enthralled by the smells, languages and variety of people. As a Toronto native, I’ve always been thrilled by cities. They give me an at-home feeling that contrasts with my current life in the small Ohio village of Granville, where I am a student at Denison University and a summer research fellow (i.e., unpaid intern!) at Harm Reduction Ohio, also in Granville (pop. 5,700).

In Montreal, as a typical tourist, I began running low on cash. While walking down one of Montreal’s main streets, I looked around for an ATM and saw a dignified white building labeled SQDC. People were in line waiting to speak to workers wearing suits at a front desk. “Bank,” I thought.

As I got closer, I looked for the ATM at the SDQC branch. Everything looked bank-like. The building was ultra-clean on the inside and had a security guard in the lobby. The suited employees behind the desks seemed to be doing ordinary paperwork — taking cards and handing things to customers in return. The customer lines were long, which made sense midday, and everyone waited patiently.

Then I went inside. The aroma was not the smell of money.  “Wow, someone just smoked a bodacious blunt,” I thought.

II looked at the transactions a little more closely. The people behind the desk were handing out money or receipts. They were giving customers small containers.

What type of bank is this? As an HRO research fellow, I Googled “SQDC” on my phone and got my answer.

SDQC is “Société québécoise du cannabis.” Mon dieu! My bank was a dispensary for recreational marijuana!

I was in a state of disbelief. I was in college in Ohio when marijuana legalization took effect in my native Canada on October 17, 2018. It had not occurred to me that marijuana dispensaries would be so ordinary, so bank-like.

I decided to explore other dispensaries to better understand how Canadian marijuana legalization was working in the real world. The Canadian parliament voted on June 19, 2018 to legalize marijuana with stores allowed to open starting October 17, 2018. This is one obvious difference between Canada and Ohio: Canada got full legalization off the ground nationwide in four months while Ohio couldn’t get its small medical marijuana program going in two years.

I visited other dispensaries in Montreal and Toronto. All the dispensaries were similar to first store I experienced in Montreal. They were all ultra-clean and business-like. The dispensaries I visited in Toronto were secure and respectful. Security outside made sure that the inside was not beyond capacity.

No flash. No drama. No crime. 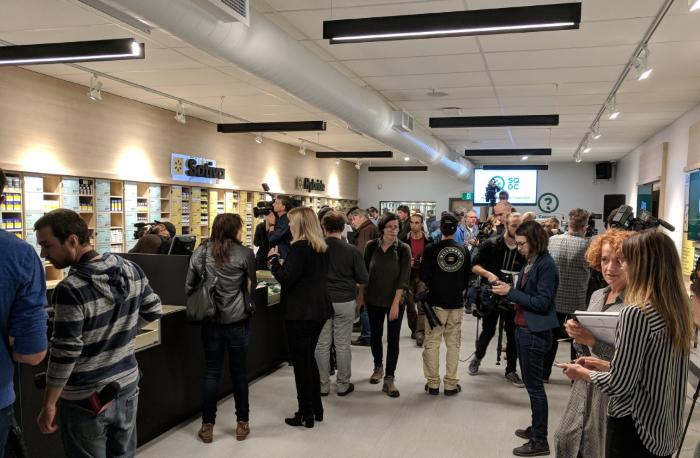 Upon entry, someone greeted customers respectfully: “Hi, sir, welcome to (dispensary name). Could you fill out this quick form for us?” It was just like any store.

How legalization works in Canada

It turns out the provincial government of Quebec operates all marijuana stores in the province, including SDQC. The Cannabis Act made it legal for an individual to possess up to 30 grams of marijuana. Each province or territory decides how distribution will work in a jurisdiction. In 8 of 13 provinces/territories, including Quebec, distribution is controlled by the government. Marijuana can be bought online or in government-owned stores. In the other 5 areas, including Ontario, distribution is given to privately owned, government-approved institutions and online vendors.

Sales are allowed for those 18 and older. Canada’s Senate is now working on making it easy for residents to get pardons for previous marijuana convictions. (Many legal marijuana states are wiping out old cannabis convictions automatically. For example, Illinois, the latest state to legalize,  will wipe out more than 700,000 marijuana convictions.)

The Cannabis Act is harm reduction in action.  Canada put public safety and public health first by controlling who and how individuals get marijuana. Canada is respecting the rights and freedoms of individuals. My country’s new institutions treat people who use marijuana with respect, not stigma.

This policy makes proud to be a Canadien. I’m learning a lot at Denison University in small town Ohio. But, in this case, I think Ohio has a lot to learn from my country. I encourage Ohioans to visit Canada and visit a local “bank” to see for themselves. Legal marijuana is something Ohio should welcome, not be afraid of.

HRO intern Christien Kelly (right), a Toronto native, is a third-year student studying Data Analytics with a concentration in Psychology and minor in Computer Science at Denison University in Granville, Ohio. He is a member of Denison University’s swimming and diving team, which won national championships in 2018 and 2019. Christien’s research for Harm Reduction Ohio includes analyzing and mapping criminal justice policies in Ohio. Former HRO intern Shanti Basu is in the center of the photo, taken in HRO’s office. 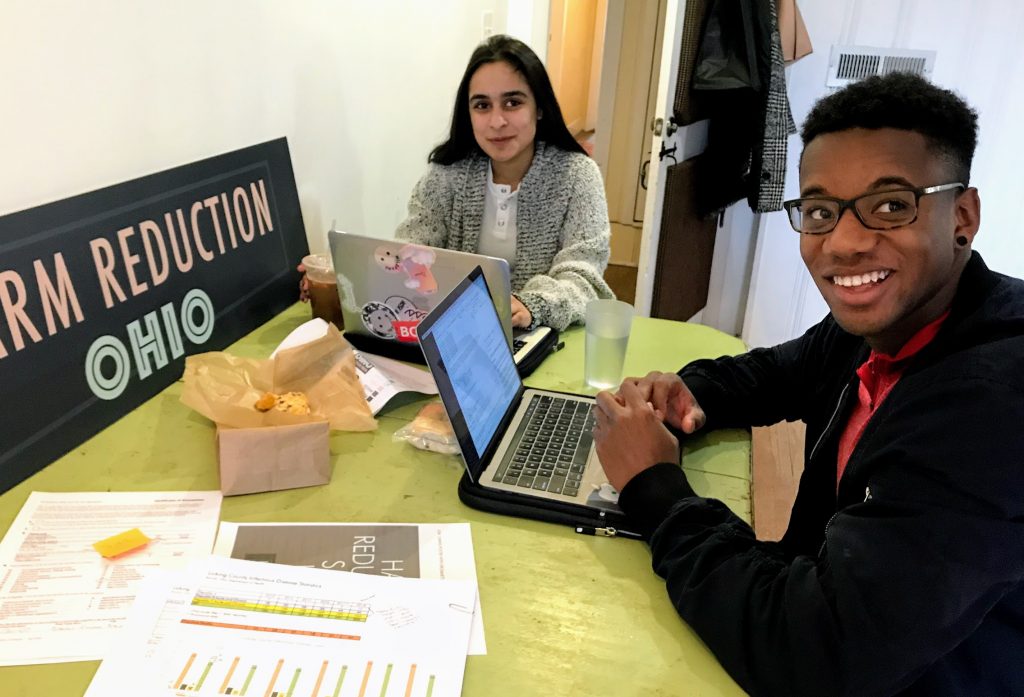