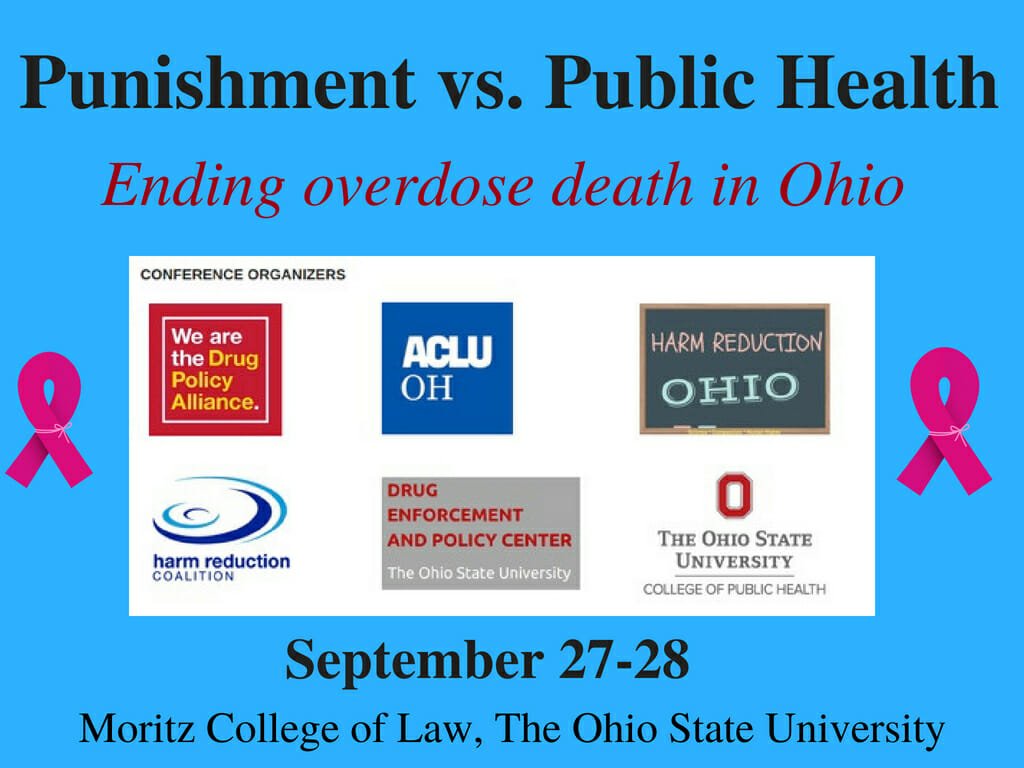 Learn what works, what doesn’t — and what makes epidemic worse

Harm Reduction Ohio and five other prominent groups will hold a groundbreaking, two-day drug policy conference at the Ohio State University’s law school on September 27-28. The event will consider all ideas — from conventional to radical — on how to end overdose death in Ohio.

The conference is called “From Punishment to Public Health: Embracing Evidence-based Solutions to End the Overdose Crisis.” It will explore the role that law enforcement, harm reduction and public health policies have played in an overdose epidemic that killed more than 4,800 Ohioans in 2017.

The combined focus on drug laws and public health gives the conference a rare breath of honesty, making it possible to tackle the most interesting and sensitive issues at the heart of the drug war and overdose crisis: what works, what doesn’t and what policies work against each other.

The conference is free and open to the public. (To attend, register at the Eventbrite web site.)

The conference is sponsored by:

Where: “From Punishment to Public Health” will be held at OSU’s Moritz College of Law, 55 West 12th Avenue in Columbus, in the Saxby Auditorium on the first floor. Law professor Doug Berman, executive director of the school’s Drug Enforcement and Policy Center, has made the college a hub of activity on sentencing law, marijuana law and other related topics.

When: The conference starts at noon on Thursday, September 27, with an afternoon devoted to drug law enforcement, followed by a full-day Friday on what research tells us works (or doesn’t).

What you’ll get Thursday: In an afternoon focused on law enforcement policies, experts from Ohio and across the country will discuss the role of prosecutors and police in overdoses, including the trend to charging drug dealers with murder when drugs cause overdose deaths and the role in punishment in drug treatment.

What you’ll get Friday: In a full-day session, harm reduction and public health experts will discuss non-punitive policies to reduce drug overdoses. On this day, drug users will give their perspectives and researchers will explain what evidence shows is most effective.

The conference is aimed at all those interested in drug policy and Ohio’s overdoses crisis. This includes lawyers and lawmakers, families and physicians, plus students, journalists, treatment providers, police, social workers and, of course, people who use drugs and are at risk of overdose death.

Please join Harm Reduction Ohio for some or all of this thought-provoking conference.