Not Right: The problem with how reporters cover fentanyl

Was the weight 2 ounces or 22 pounds?

Why the difference matters 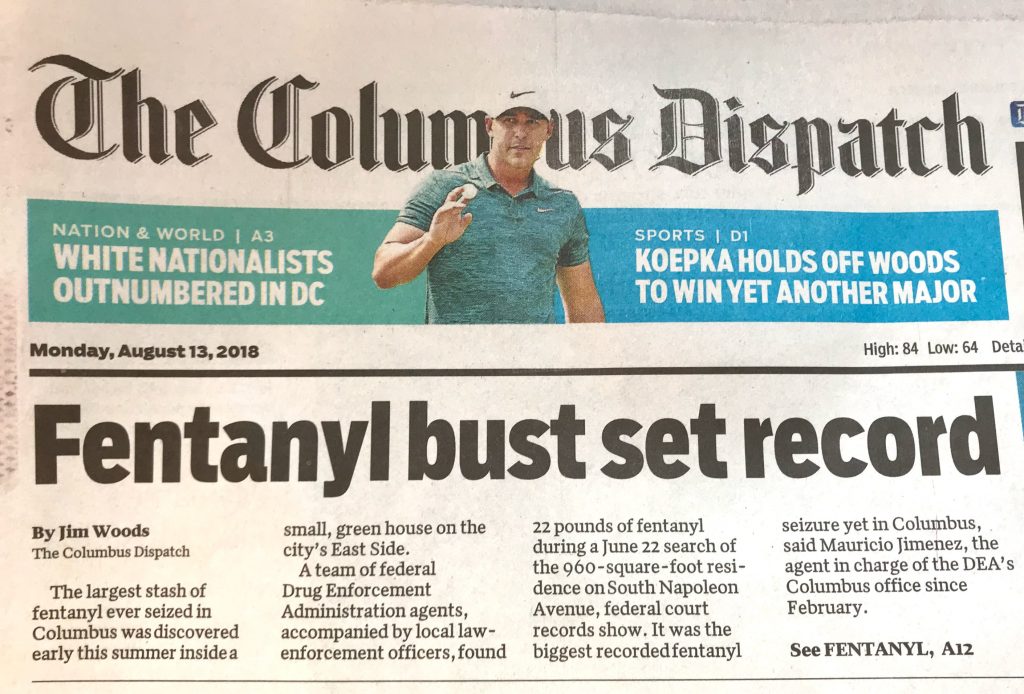 I was a newspaper reporter for 34 years before starting Harm Reduction Ohio, so I’ve been complaining about how the drug war is covered for a long time, for decades in newsrooms and for a few years outside of them. Today’s lead story in The Columbus Dispatch — “Fentanyl bust set record” — is a typical example of how competent daily journalism distorts our understanding of illegal drugs.

The Dispatch reports that the local DEA office says it confiscated 22 pounds (10 kilos) of fentanyl. Reporter Jim Woods likely has no idea that this is a false claim and inaccurate in a way that unwittingly contributes to Ohio’s terrible overdose toll (4,854 in 2017).

What police call “fentanyl” is never just fentanyl. In DEA-confiscated fentanyl in the Midwest, the drug mixtures have been found to contain 0.7% to 4.1% fentanyl. This is why you can’t say how much fentanyl was found or, as the local DEA office claims, it was the largest fentanyl bust ever in Columbus. In fact, based on what’s usually found, the fentanyl mixture contained anywhere 2.4 ounces to 14.4 ounces of fentanyl. A 10-pound seizure that is 4.1% fentanyl would have contained far more fentanyl than a 22-pound seizure (like this one) at 0.7% purity.
Why does this matter? Because the conventional belief that the weight of the drug mixture is matters is — to be blunt– ignorant and false.  The amount of actual fentanyl is what kills people. The amount of other stuff (diluents) matters for an opposite reason: it’s what saves people.
The false belief that total weight of a drug mixture is a good-enough measure was behind S.B. 1, a harmful, sloppily written “get tough on fentanyl” law that Gov. John Kasich just signed. The law increases sentence lengths (already too long) based on the weight of fentanyl + the weight of diluents, meaning that 96%-99% of prison terms in Ohio will be based how much the potent drug is diluted. To reduce sentence length, the rational dealer or smuggler would reduce minimize dilution — that is, keep it more dangerous. Ohio’s new  “incentivize dealers to make fentanyl more dangerous” law is an example of how myths and ignorance are the foundation for policies that do harm, even when well-intentioned.
With fentanyl, carfentnail and its analogs, ignorance is deadly — literally, deadly. Fentanyl isn’t an inherently deadly drug or even that dangerous when handled properly. What’s killing people is poorly diluted fentanyl.  Overdose victims aren’t allergic to fentanyl; they took too much. Reporters, cops, doctors, politicians and users(!) must start focusing exclusively on the amount of actual fentanyl, not what it’s stored in or diluted in.
Fentanyl facts 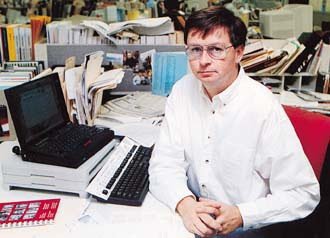 Who is this young man? HRO President Dennis Cauchon, then a national reporter at USA TODAY, in the newsroom in 1999.

Fentanyl has been the No. 1 anesthetic in hospitals for four decades, largely because it’s safer and shorter acting than other opiates. Because it’s potent in such small doses, the fentanyl used by anesthesiologists is always diluted to 1 part fentanyl to 20,000 parts other stuff (usually water). Even doctors don’t mix the fentanyl they use. Neither does the hospital pharmacy. It is shipped at this 1:20,000 ratio from the pharmaceutical factory. This is true for every hospital in the country. Fentanyl given to patients by IV everywhere is mixed in a solution at 1:20,000 — or 0.005% pure.

Doctors don’t care about the weight of the mixture or write the total mixture’s weight in medical charts or scientific studies. They care only about the actual amount of fentanyl in the mixture because…well, it would be stupid to do otherwise.  Fentanyl — not the water its diluted in — determines if the patient is asleep, in pain or dead. This is objective reality, not subjective opinion.

Yet  reporters, politicians, cops and, by extension, the public pay zero attention to the actual amount of fentanyl — even though it’s the ONLY thing that matters! Sadly, most users focus on the total weight of a drug mixture, too — and it’s killing them. Nearly everyone involved in the drug war treats fentanyl as if it’s “strong heroin.” It’s not, any more than a plane is a strong car or a car is a motorized horse.

Users have an excuse for focusing on total weight: it’s the only information they have. People who make drug laws and enforce them have no excuse. They have science but refuse to use it. Confiscated drugs are sent to labs where gas chromatography-mass spectrometer analyses are done. The precise chemical contents of drug mixtures available to anyone who cares.

Compare pharmaceutical fentanyl to street fentanyl to understand why the “the drug mixture” concept is so deadly.  A fentanyl drug mixture that is 0.7% pure has a fentanyl-to-diluent ratio of 1:143. A drug mixture that is 4.1% fentanyl has 1:24 ratio. These are crazy purity levels!
An anesthesiologist trying to knock you out for surgery might start with a 25 microgram dose, wait five minutes and then push another 25 “mics.”  A user who takes the traditional 1/10th of a gram heroin dose would be injecting 700 micrograms to 4,100 micrograms in one push if the mixture was 0.7% to 4.1%.
How users survive these doses ever is a medical miracle! “Nobody’s breathing at 1,000 mics,” an anesthesiologist, who spends her days pushing, mics told me. Survival rates are truly more astounding than death rates. They’re a tribute to the ability of some heavy users to develop opioid tolerance far beyond what the medical profession thinks possible.
Also, in the age of fentanyl and carfentanil, users have moved to injecting smaller doses than the traditional tenth of a gram. In addition, the 0.7% to 4.1% purity in DEA samples gets diluted further as it moves down the supply chain to the retail user — and, with fentanyl, that’s a very good thing. (Oddly, no study has been done estimating the purity levels of fentanyl mixtures that people inject, so firm is the delusion that all that matters is total mixture weight. So here we are, five+ years into an overdose epidemic that’s killed about 200,000 Americans, and we don’t even have a real understanding about why people are dying. Imagine if our understanding of fatal auto accidents was this: car.)
This we know: Fentanyl levels are way too high. And that’s before you consider that the other stuff it’s mixed with may be heroin, cocaine or meth as well as inert substances.
As explained elsewhere on this web site, street fentanyl should ALWAYS be diluted to at least 1:1,000 for safe human consumption. Drug markets are dominated by poor people trying to make a better life for themselves and their families. They lack the technical skill to precisely and accurately dilute fentanyl and its analogs. The four men from Mexico who were arrested in Columbus may have the skill and courage to smuggle drugs, but they were in the transportation business, not chemical business. 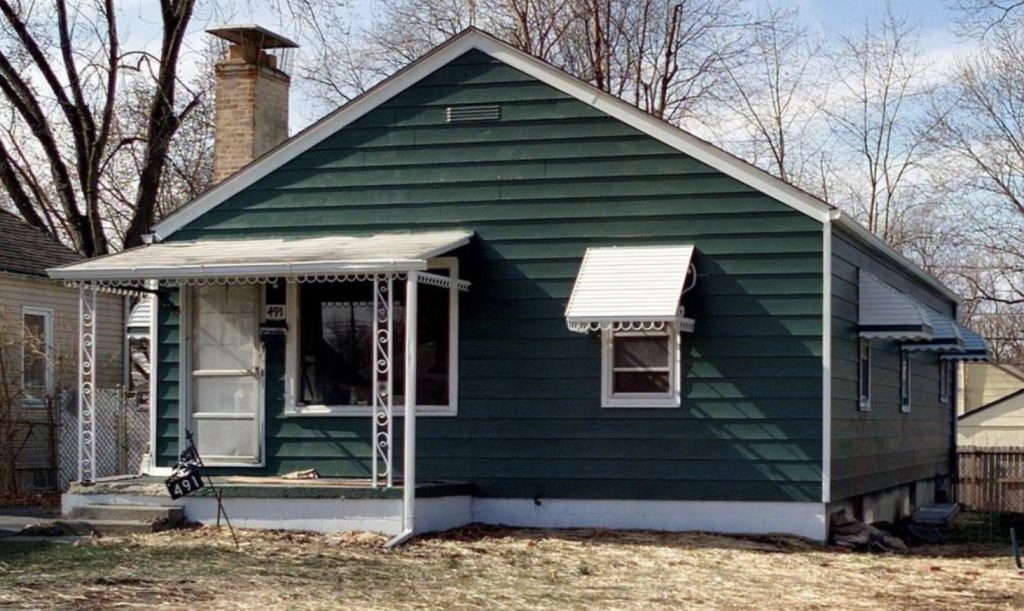 Fentanyl Mixture Found Here: A house of drug kingpins? Chemists? Or the poor?

News stories that treat diluents as if they’re as dangerous as actual fentanyl are the type of everyday ignorance that illustrates why reporters (and cops) are clueless about why people are dying of overdoses and what can be done to save them.
Law enforcement creation: fentanyl

Law enforcement is driving the drug market to fentanyl and its analogs because it works in tiny amounts that are easy to hide. The supposedly biggest bust of fentanyl was found in a tiny 960-square-foot house occupied by four men, who also had heroin and meth. Fentanyl has replaced heroin because it’s small, cheap and easy-to-hide from cops. Heroin replaced morphine for this reasons, just as morphine supplanted opium after legal restrictions were imposed. Ultra-potent carentanil displaced fentanyl as Ohio’s go-to drug for about a year and a half because it’s the smallest opiate known, but that trend — which killed about 2,000 Ohioans — appears to be receding.

It is reckless and deadly for police and prosecutors to punish diluents as if they’re fentanyl and carfentanil. It is irresponsible for journalists to regurgitate the claims of their sources as if they are objective facts that explain what occurred. In fact, the details are accurate but selective, deceptive and based on ignorance of what (objective) information should be transmitted to the public.
Those who support the drug war do so because they sincerely believe it will save lives. (Not an accurate belief, but a sincere one.) Even the most fervent drug warrior must understand the difference between drugs active in micrograms and the diluents used to make them survivable by humans. Whether you support the drug war or oppose it…whether you use drugs or not…you must recognize and take seriously that potent fentanyl needs to be diluted in the extreme. And if saving lives is our goal, no public policy — NONE — should ever punish diluting fentanyl. To the contrary, the united public health message to dealers and users should be: dilute, dilute, dilute…then dilute some more!

Dennis Cauchon, founder of Harm Reduction Ohio, took a buyout from USA TODAY in 2013. During his 27 years at the newspaper, he did stories including the first report on the racially discriminatory 100:1 crack-to-powder cocaine ratio. After a data analysis of imprisonment rates, Cauchon was the first to write about “an era of mass incarceration.” Among his better known stories were groundbreaking stories on who died, where and why in the World Trade Center on 9/11. That first story can be found here. The second and third pages of that story are here and here.  He did a mid-career Knight Journalism Fellowship at the University of Michigan Medical School studying “the history of false ideas.” (Go Blue!:)