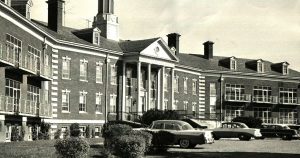 Most people know that the Centers for Disease Control recommends that health authorities provide access to sterile syringes for people who inject drugs. Less well-known is the fact that the Ohio Department of Health recommends syringe programs, too. The state health department issued a Health Alert in October on rising HIV cases related to IV drug use. In that Health Alert, ODH included its strongest language yet on the value of syringe programs in preventing HIV and other diseases: 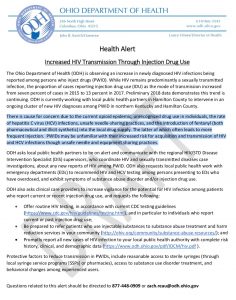 ODH said affirmatively and directly that syringe programs work: “Protective factors to reduce transmission (of HIV) in PWIDs, include reasonable access to sterile syringes (through local syringe service programs [SSPs] or pharmacies).” PWID is short for People who inject drugs.

Many public health boards in Ohio have followed this advice and done a great job putting the CDC and ODH recommendations into practice.  Today, 19 of Ohio’s 88 counties have syringe programs (sometimes called “needle exchanges”). (See locations here.) The Logan County Board of Health has approved a program that has not yet started. Other counties are planning programs that could start later this year.

A first: Licking County votes “no” on preventing HIV, hepatitis

Licking County Board of Health

Public health efforts to prevent HIV and Hepatitis C took a blow last month when the Licking County Board of Health became the first in Ohio to outlaw syringe programs.

In an unannounced 8-0 vote at its February 19 meeting, the Licking County health board imposed comprehensive ban on syringe programs. The board blocked all private organizations (even health care providers) from providing sterile needles, as well as its own health department. (The county health department had included syringe access in its strategic plan of things to accomplish.)

The board’s expansive prohibition banned mobile programs (such as those run from a van) and those operating at at fixed sites (such as a clinic).

The local newspaper, the Newark Advocate, blasted the Board of Health’s secret vote as “cowardly.” (The Advocate citizen’s board supports a syringe program, too.) While some politicians oppose syringe programs, the Ohio Health Poll shows most Ohioans favor the programs.

Harm Reduction Ohio and Equitas Health of Columbus had told the board Licking County health board it was interesting in starting a syringe program. However, no proposal had been made. Instead, the Board of Health, a citizens board appointed by local Township trustees and mayors, acted on its own initiative to block the health initiative.

Harm Reduction Ohio will join medical professionals, community leaders and people with lived experience next month to request the Board of Health reverse its decision and follow science over stigma. The meeting will be Tuesday, May 19 at 6:30 p.m. at the Licking County Health Department, 675 Jones Road in Newark, Ohio.

Licking County is a 175,000-resident county, just east of Columbus. Newark is its largest city and the likely location for a syringe program.