At long last: Ohio issues public warning of fentanyl in cocaine and meth

One state agency says what other won’t

The state of Ohio released an important warning today on increasing reports of fentanyl being cut into drugs other than heroin.

The update is the state’s first public warning that fentanyl and its analogs have moved into a wide range of illegal drugs, including cocaine and methamphetamine. The change has caused hundreds of overdose deaths beyond opiate users, transforming an “opioid epidemic” into a “drug overdose epidemic.” 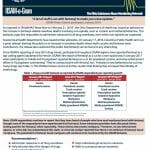 Until now, Ohio has publicly stuck with the claim that overdoses were the result of an “opioid crisis,” despite the state’s own data pointing to the problem extending far beyond heroin addicts.

The state’s new alert was issued by the Ohio Department of Mental Health and Addiction Services and and is based on information collected by the state’s extensive illegal drug surveillance system, in place since 2000. Every six months, researchers interview hundreds of drug users, treatment providers and law enforcement officers on what’s being used, the cost, and so on.

OSAM’s first report of fentanyl as a cut for a non-opioid was in January 2017 when participants in Toledo and Youngstown reported fentanyl as a cut for powdered cocaine, and a law enforcement officer in Youngstown commented, “They’re cutting cocaine with fentanyl, too.” Fentanyl is now believed to be cut into many drugs (see Table 1). This OSAM-O-Gram serves to further caution that fentanyl has increased the lethality of street drugs.

The state’s list accurately represents what researchers heard during interviews with several hundred people close to the drug trade.

The report added this caution about fentanyl-laced marijuana:

Note, OSAM respondents continue to report that they have heard of people who have used marijuana laced with fentanyl, though none of the respondents have experienced this first hand. Some treatment providers have discussed clients testing positive for fentanyl, when reportedly, “these clients only smoke marijuana.” However, no law enforcement agency, or crime lab, has substantiated this claim. A crime lab analyst reported that there is no evidence of fentanyl-laced marijuana. The potential for fentanyl-laced marijuana will continue to be monitored by the OSAM Network.

Harm Reduction Ohio has challenged reports of fentanyl-laced marijuana, labeling them urban myths (so far), but supports the claim being included in this report because it is an accurate reflection of what is reported to the state’s researchers. Also, the risk of fentanyl-laced marijuana is real. Contrary to what some marijuana users believe, fentanyl canbe mixed into marijuana and could be deadly if smoked or eaten. However, no confirmed reports of this actually happening in Ohio (or elsewhere in the U.S.) have surfaced.

“Ohio deserves to be commended for reporting to the public what they know and what researchers were told,” said Dennis Cauchon, president of Harm Reduction Ohio. “Taking drugs is risky. People need accurate information to make accurate decisions about their health.”

The new public health threat is really fentanyl-laced cocaine and fentanyl-laced meth. Harm Reduction Ohio found that about 10% of cocaine in the Dayton area and Cleveland area was contaminated with a fentanyl. The adulterant was, for reasons unknown. frequently carfentanil, which is ultra-potent by weight and extraordinarily dangerous.

A smaller share of meth appeared to be fentanyl-laced, but data is sketchy and the drug is more widely used than heroin, meaning a small amount of contaminated meth can kill a lot of people.

Few cocaine or meth users have opioid tolerance, so extremely small amounts can cause overdoses. Also, cocaine and meth users rarely expect an opioid in their stimulant. Cocaine/meth combined with an opioid is called a “speedball,” a niche product. But even when taken for this effect, the drugs are often mixed together by the user rather than contained in the purchased drug.

Also, fentanyl-laced cocaine and meth are dangerous because naloxone is not always accessible to meth and cocaine users, as it often is for heroin users. First responders must adapt to this new trend, too. Stimulant users who die of overdoses usually suffer heart attacks. By contrast, fentanyl and its analogs kill by slowing — and eventually stopping — breathing, essentially putting a person into a death sleep.

The Ohio Department of Silence

The Ohio Department of Health issued an advisory to county health departments in February saying autopsy results had found a fentanyl mixed with cocaine or meth in more than 1,000 fatal overdoses in 2017, a big increase over the previous year. However, for reasons unknown, the Ohio Department of Health refused to make this alert public — refusing to place it on the Internet, Facebook or Twitter — where the information could be shared publicly and reach drugs users and those close to them.

Regardless, this is a positive development. As everyone in a 12-step program knows, the first thing one must do when a problem exists is to admit it. Today’s action is the Kasich administration’s first public acknowledgment: “Hi. My name is Ohio, and I have a problem. Hundreds of my residents are dying from fentanyl in cocaine and meth. It’s not just a heroin problem.”