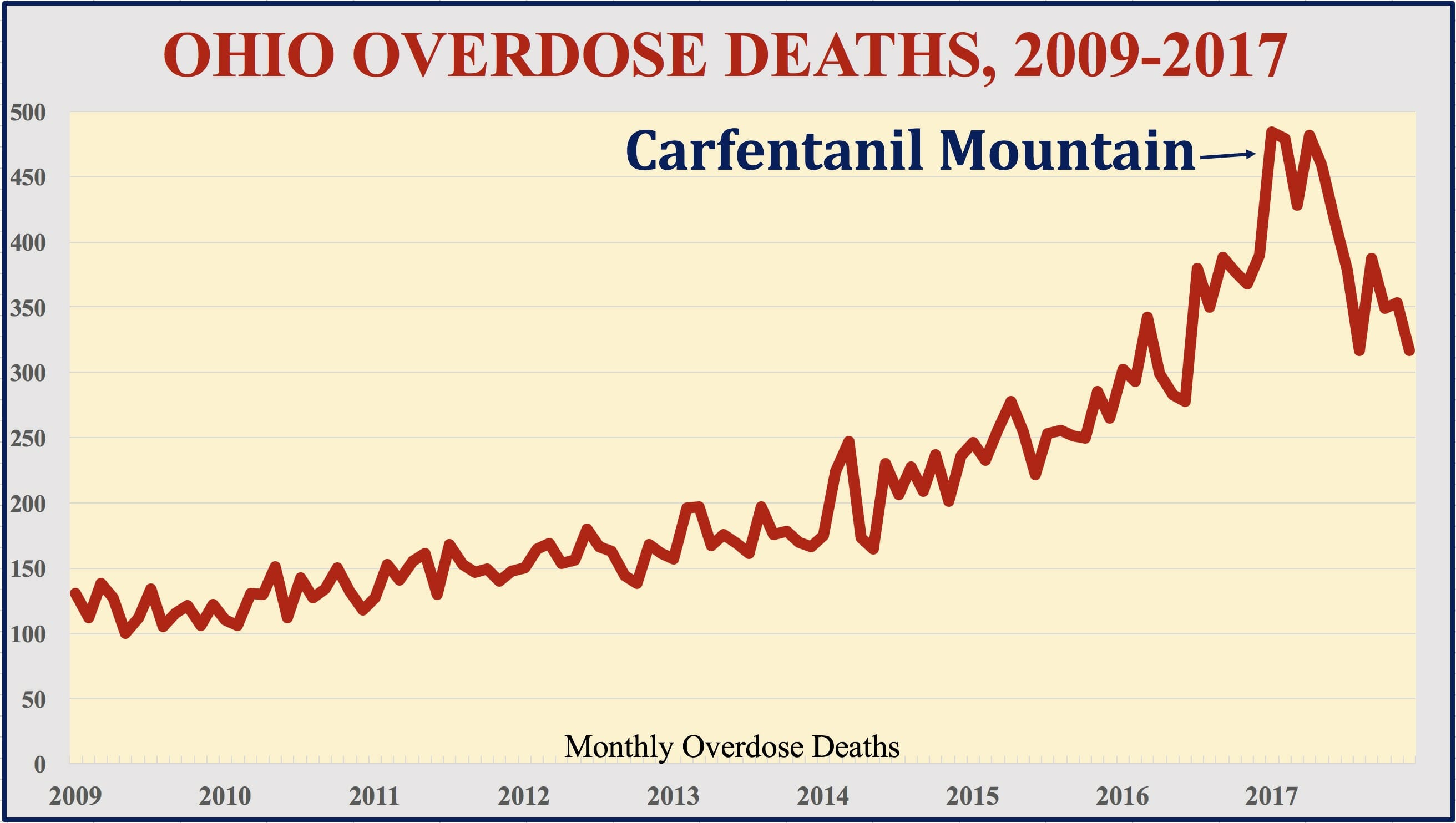 Drug overdoses killed 4,854 Ohio residents in 2017, a 19.7% increase over the 4,050 overdose deaths in 2016, according to a Harm Reduction Ohio analysis of Ohio Department of Health’s mortality data.

Ohio suffered an unprecedented wave of overdose deaths starting in mid-2016 when carfentanil entered the state’s illegal drug supply. Carfentanil, the most potent opioid (of any kind), killed more than 1,100 Ohioans from July 2016 to June 2017.

For unknown reasons, carfentanil has receded — but not disappeared — from Ohio’s illegal drug supply, resulting in a decline in overdose deaths.

State officials have not commented on the carfentanil-fueled death wave and appear attached to the outdated belief that drug-use levels are the driving force behind overdose deaths. In fact, the danger in the chemical composition of black market drugs (i.e., drug concentration, drug variability, adulterants, and contaminants) is the primary determinant of overdose levels.

The Ohio Department of Health will announce Ohio’s official 2017 death toll in late August. But the 4,849 overdose deaths now in the department’s database (available online) are likely to be very close to the final number.

What do 2017 overdose numbers tell us?

Long-term trend. Overdose deaths have risen in Ohio for eight consecutive years. The last decline was a 3.4% drop in 2009.

Note: Overdose deaths last fell in 2009, during a period of fast-growing growth of opioid prescribing. Overdoses during this period were given as the reason for limiting legal opioids. The overdose epidemic took off when Oxycontin was reformulated in May 2010 to prevent users from snorting or injecting the drug. The death toll accelerated enormously as tighter and tighter restrictions on access to legal drugs were imposed.

In retrospect, it’s clear that this was a disastrous public health policy that drove tens of thousands of Ohioans into the dangerous illicit marketplace, causing an epidemic of overdose deaths that is still underway. 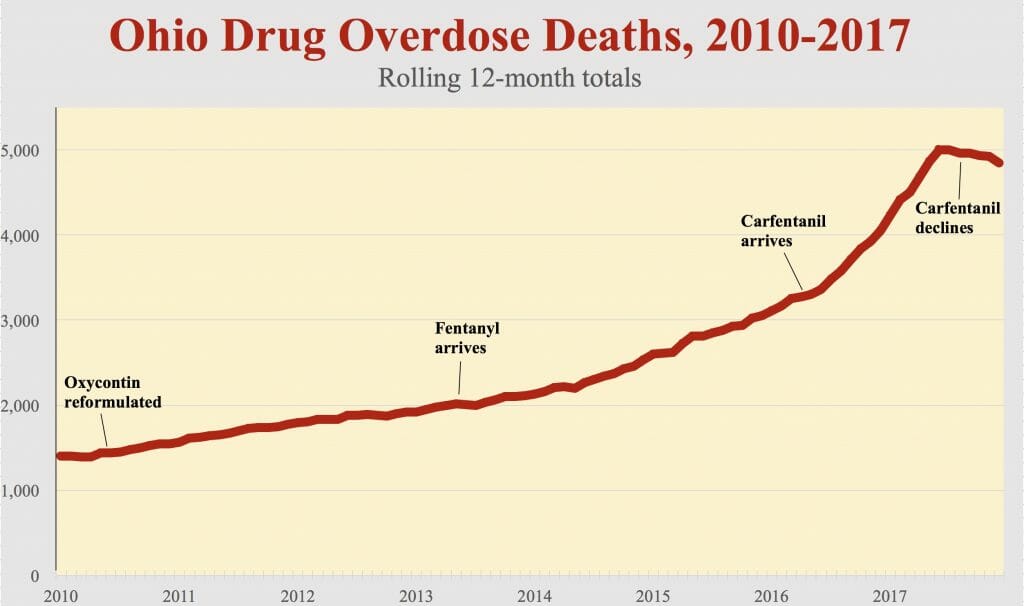 Fentanyl in cocaine and meth. Cocaine-related overdoses killed 1,538 Ohioans last year. Of those, 1,072 — 69.7% — involved cocaine-fentanyl combinations. Carfentanil has been especially common in cocaine. The same is true for meth, although the Ohio Department of Health will not release those numbers until late August.

It’s wrong to say Ohio is experiencing an opioid crisis or a heroin epidemic. Ohio is experiencing a severe drug adulteration crisis that cuts across all drugs except marijuana. (Ohio’s marijuana has escaped fentanyl contamination because it is domestically produced, either grown in-state or imported from states that have legalized.) 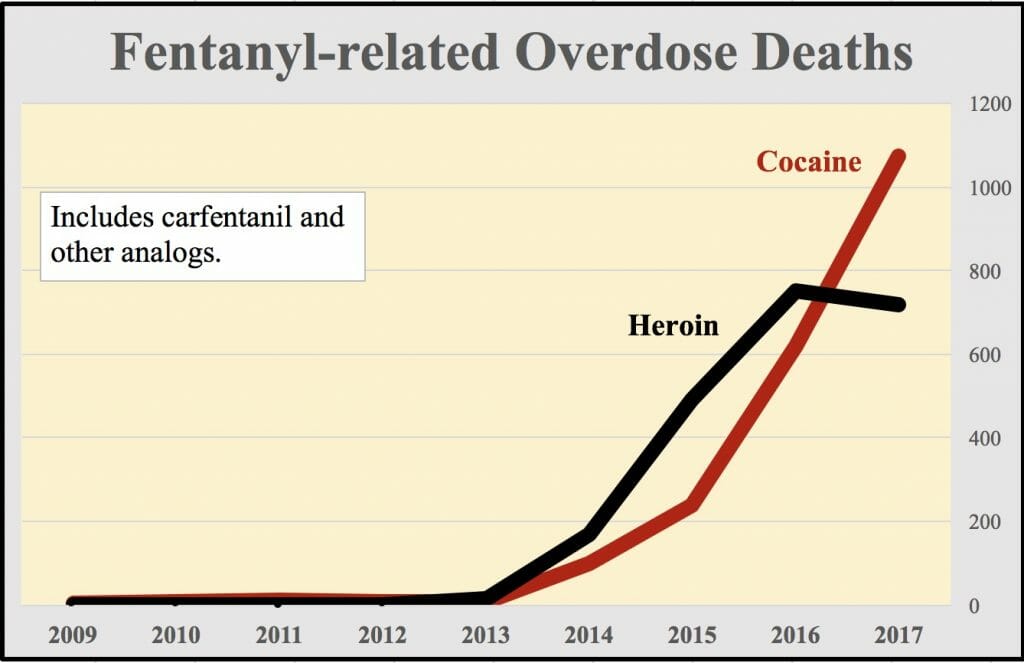 Race of victims is changing. Until now, the overdose death epidemic has been primarily a white phenomenon, especially for poor whites. That’s changing. The move of fentanyl and carfentanil into the supply of cocaine has killed an increasing number of African Americans who, for whatever reason, make up a disproportionately large number of cocaine deaths and a disproportionately small number of heroin deaths.

For the first time since the epidemic began, Ohioans who are black accounted for a share of overdose equal to their share of Ohio’s population: 12.6%. 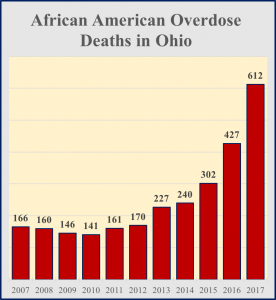 The drug war is taking a devastating toll in Ohio. Prohibition kills. Always has. Always will. Is doing so now.

Drug use can cause personal problems and health troubles but it shouldn’t cause sudden, unexpected death. Bad policy is getting bad results, even if the original sin was well intentioned. 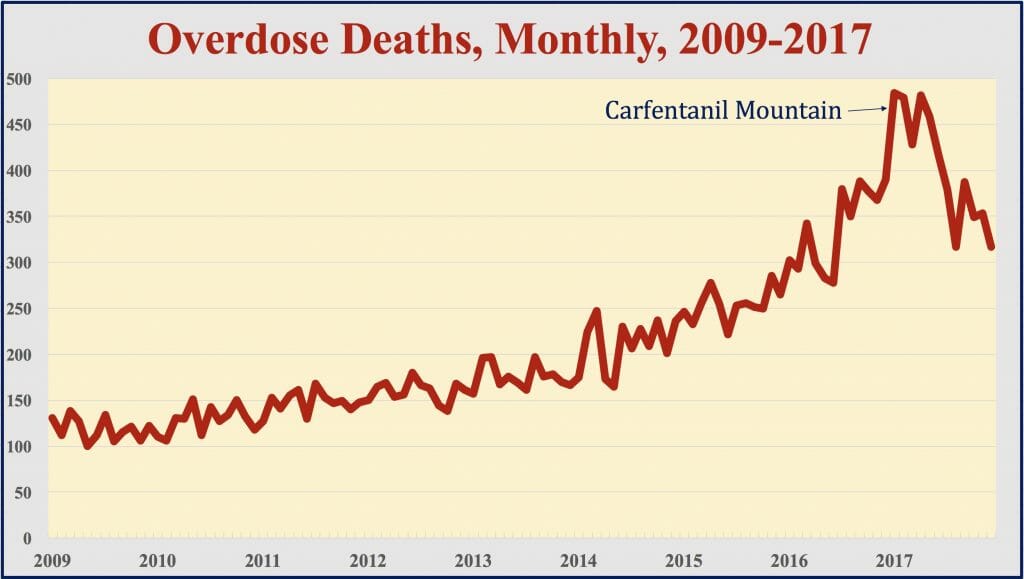