This is not normal

Drug use levels are not Ohio’s problem 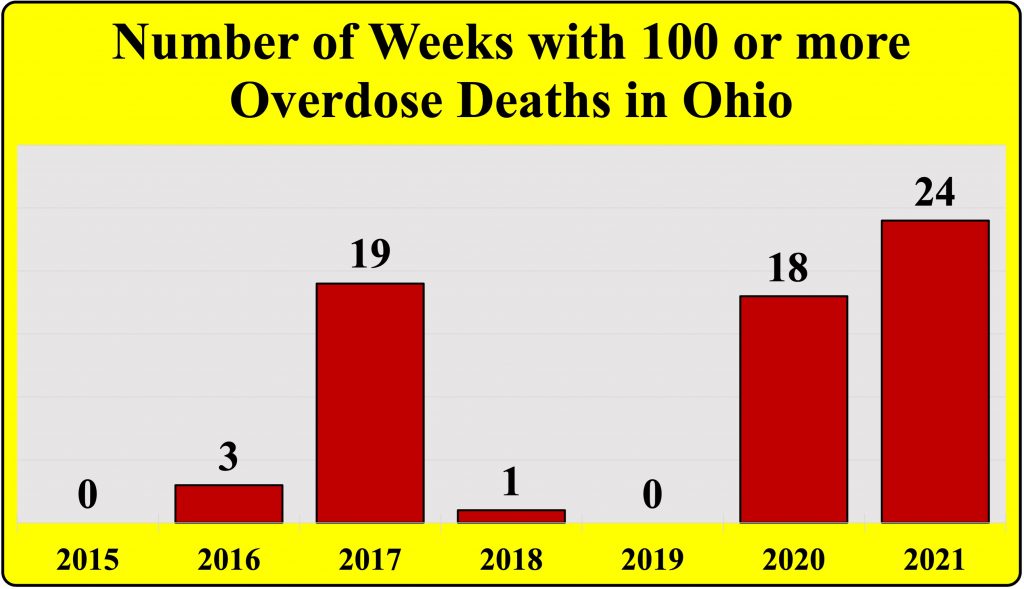 Another way to look at the intensity and relentlessness of our state’s epidemic of overdose death is to count the number of weeks in which 100 or more Ohioans died from overdoses. That, too, was a record: at least 100 people died in 24 weeks of 2021.

The week of July 10 – July 16 was last year’s deadliest: 131 Ohioans died from drug overdoses. That wasn’t the deadliest week ever. The week of June 6 – June 12, 2020 — shortly after the covid pandemic sent overdose deaths spiking upward — was the worst week for overdose death in Ohio history.

What happened is 2021 is that high levels of overdose death became more consistent than ever, even if the extreme post-covid spike seen in 2020 lessened somewhat.

This is not normal

It’s important to remember that Ohioans dying of overdoses in numbers of 100 or more per week is not normal. It’s not even a normal part of recent history, much less since OxyContin was released in 1995.

Ohio has below average levels of drug use. Drug use is not the cause of the overdose epidemic. That’s why we can’t treat our way out of this epidemic…or Narcan our way out…or prevent our way out.

Our state has bizarrely high levels of drug death because the drug war has an extraordinarily dangerous drug supply. The lethal consequences of the drug war have been so large, so relentless, so horrific that we should classify it as an example of genocide against a small, disliked, stigmatized population.

This chart shows overdose death in Ohio by month, rather than year. In 2021, Ohio suffered 400 or more overdose deaths in nine of 12 months, another sad record. 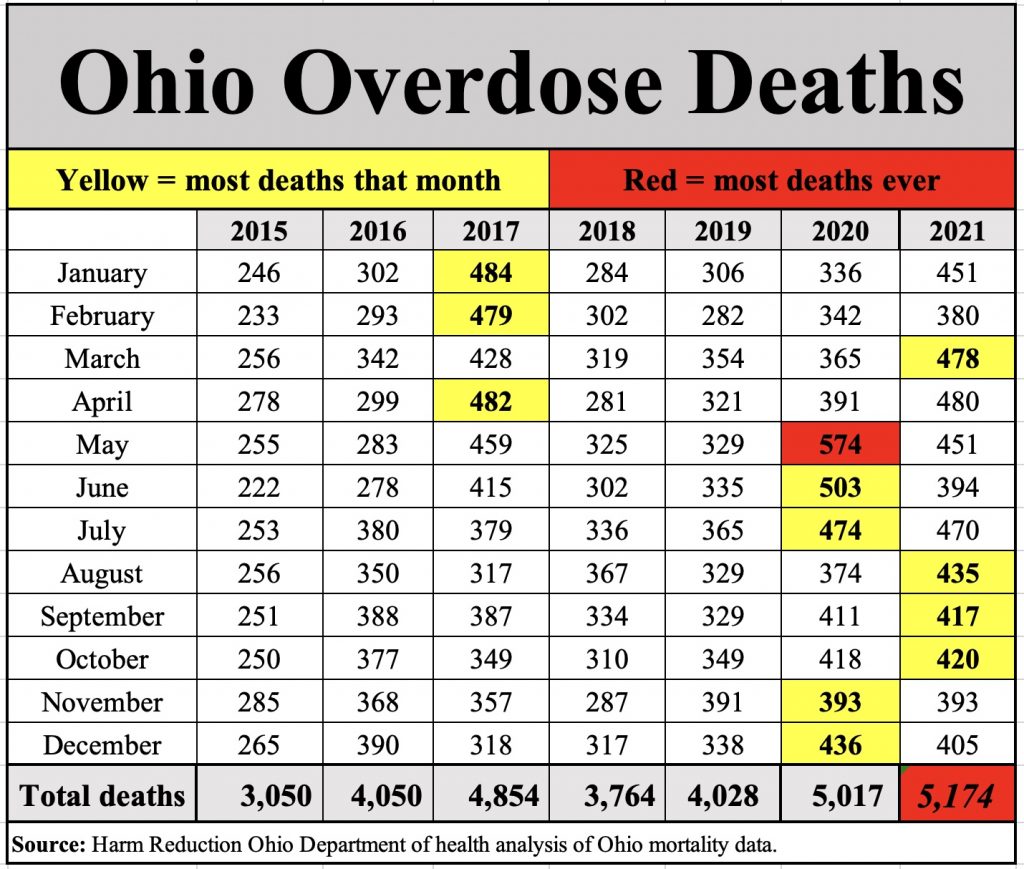 Drug Use in Ohio

Conventional wisdom attributes high overdose death in Ohio to high levels of drug use in Ohio. As Harm Reduction Ohio readers know, this is false. This is a way to shift blame to the victims (people who use drugs) and away from policymakers who have caused the overdose death epidemic.

This chart shows how drug use in Ohio compares to the United States as a whole. The most important number is “Illicit Drugs, Excluding Marijuana, Past Month Use” because use of all non-cannabis drugs (opioids, cocaine, meth, benzos) carry enormous overdose risk in Ohio. (Marijuana is safe, not matter what nonsense you hear.)

The key point is that the level of drug use in Ohio is not the cause of our state’s overdose death epidemic and Ohio’s consistent rank as No. 2 to No. 5 among states in overdose death rates since 2015. 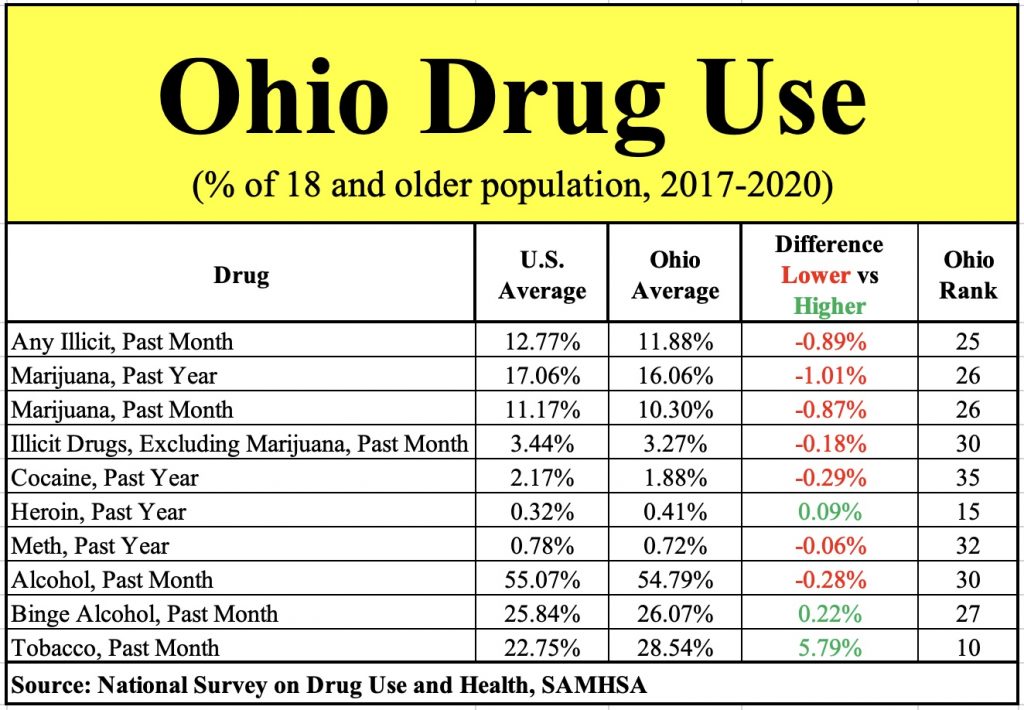 When and why things turned more deadly 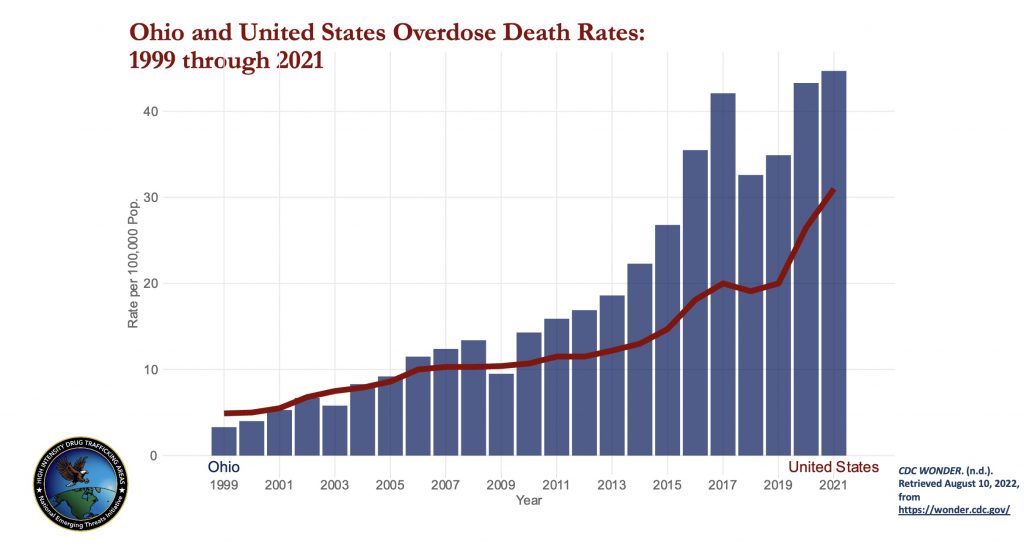 Correlation is not the same as causation — except sometimes it is.

If we are honest with ourselves, we will acknowledge that the evidence shows that a policy intended to reduce overdose deaths has had the opposite effect. The crackdown on prescription opioids disrupted drug markets, pushing people from prescription opioids to the more potent, illicit opioid heroin, which was then supplemented by the cheaper, more potent, easier-to-make-and-smuggle opioid fentanyl. Cheap and compact fentanyl then spread as an all-purpose adulterant in cocaine, meth, benzos and all drugs other than cannabis. And this is where we are today: 5,000+ deaths per year.

How to reduce overdose death

How do we reduce overdose death? First, stop expanding the drug war.  That has created a deadly drug supply and caused the overdose epidemic.

Creating a safer drug supply is the only way to reduce overdose death. Some people will still struggle with drugs…but they will die far less often. Killing people who use drugs because some may struggle is not a solution to problematic drug use.

The cause of the overdose epidemic is clear: The drug war is causing a genocide against people who use drugs in Ohio and elsewhere. The drug war may have been well-intentioned when it began, but we must be honest with ourselves: the result has been catastrophic.