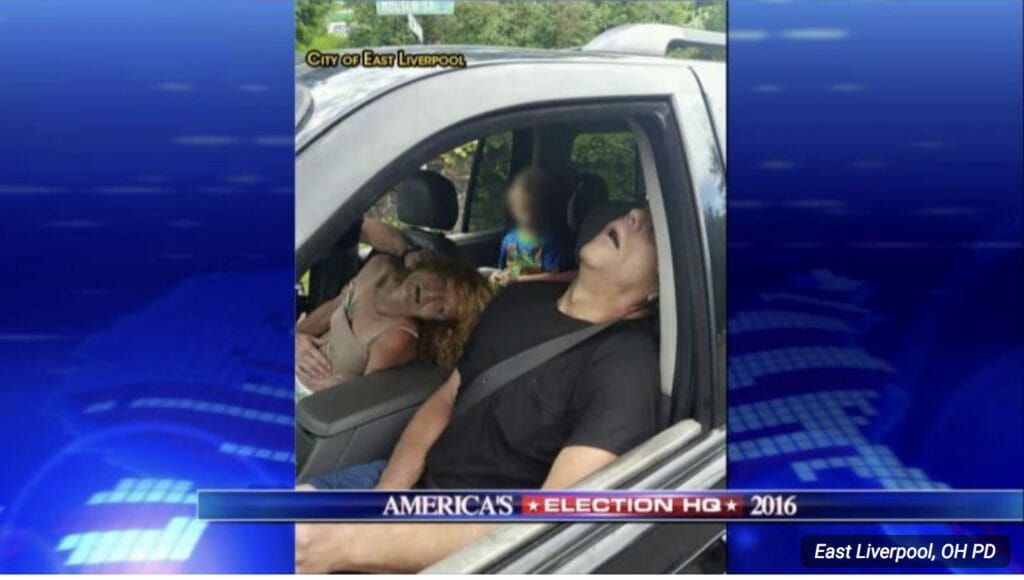 A Google search on “Ohio drug users” returns this image as the top result.

Is it an accurate representation of Ohio drug users, or even of Ohio opioid users? It is not.

The photo is authentic, taken by police in East Liverpool, Ohio, in September, 2016. But when Google returns dozens of negative photos — and no positive or even neutral ones, the algorithm of bigotry towards a diverse group of nearly 1.8 million Ohioans is clear.

Is there any group today more victimized by stereotypes, stigma and ignorance than illegal drug users?

The trouble starts with the idea that illegal drug use is “deviant.” In fact, the opposite is true. Drug use, including consuming prohibited drugs, is more common and “normal” than being gay, a military veteran, Latino or a senior citizen.

When everyone is deviant

More than 80% of Ohioans use drugs recreationally and half say they’ve used illegal drugs. In Ohio (and elsewhere), illegal drug users are as common as the male XY chromosome pairing.

And illegal drug use remains one of Ohio’s most popular recreations. Nearly 18% of Ohioans are active consumers of prohibited substances, the same percentage who exercise regularly.

Can something so ordinary really be classified as deviant, much less than inherently harmful?

Google produces this photo when asked for an image of “Ohio senior citizens:” 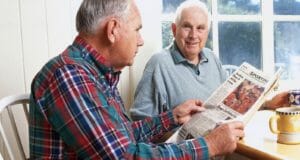 Drug users: What do we really know?

Is drug use good or bad? Healthy or unhealthy? Desirable or undesirable?

These questions are meaningless if not applied to a specific person. Is drinking beer good or bad? The answer is, of course: It depends — on who, when, why, how much, and so on.

Personally, I don’t drink alcohol, use tobacco, smoke marijuana or use any illegal drug. Neither do I play football, drive a Prius or eat beets.

Bigotry and prejudice is the false belief that one thing tells us everything about people in a large group.

A better approach is to respect human variety and live peacefully with others who differ from you. To me, this means not arresting, imprisoning, firing, stigmatizing or denying rights to people who use drugs or eat beets. I may avoid them (you’ll never see me at a bar) and even regret their mistakes (my best friend was killed by a drunk driver). But I would never imagine that a large group of people I don’t know is collectively mentally ill or criminal.

But, of course, others do believe this. So to learn more about Ohio’s persecuted drug users, I decided to count the group’s population — or, specifically, use the federal government’s annual drug use survey to put a number on the drug threat: my state’s drug-using population.

What the numbers show

The National Survey of Drug Use and Health estimates how many drug users Ohio has among 9.87 million residents ages 12 and older. As the survey recommends, I combined data from both the 2015 and 2016 surveys to improve data quality for state-level estimates. About 10,000 Ohioans were surveyed during those two years about what drugs they used and how often.

Here’s the federal government’s census of Ohio drug users. The first three charts describe drug using populations as a whole. The last two charts look closely at Ohio residents who use prohibited drugs that might be contaminated by fentanyl or its analogs, such as carfentanil. 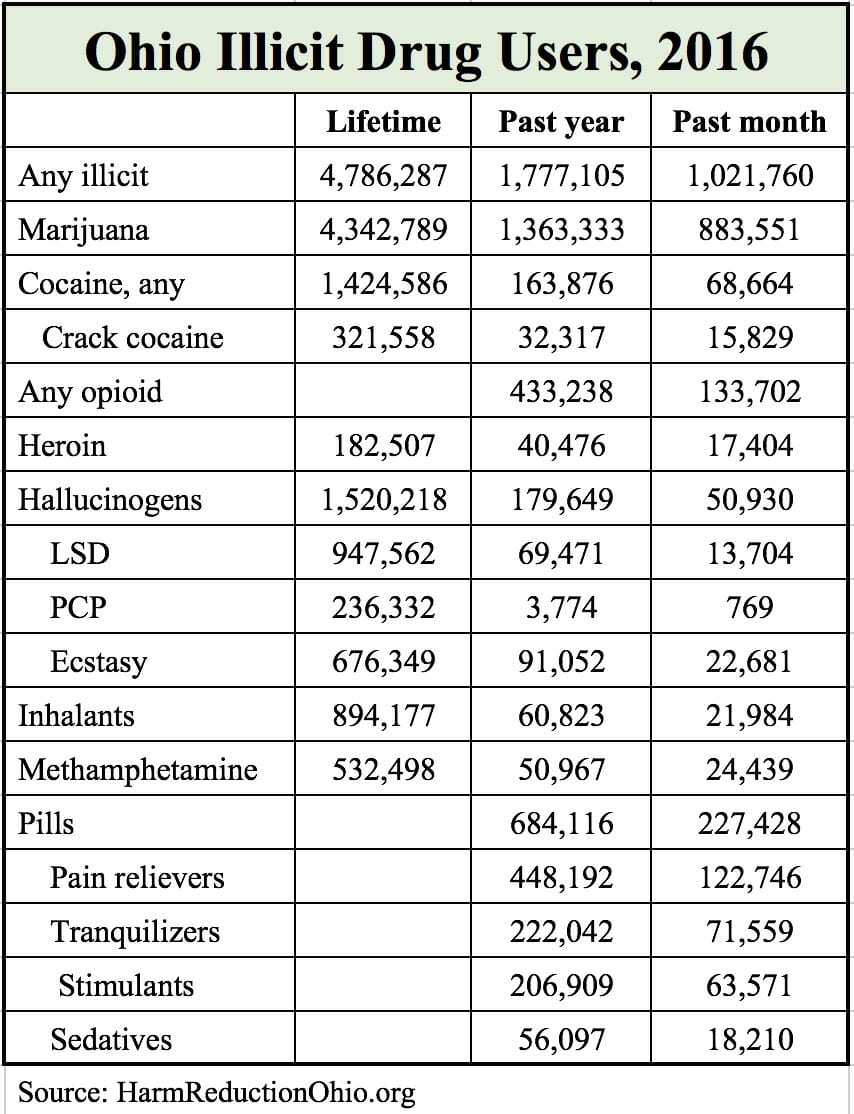 As you can see, marijuana is, by far, the most popular illegal drug.

In the next chart, we look at (mostly) recreational drugs, both legal and illegal, excluding caffeine and prescription drugs, which aren’t included in the survey. I say “mostly” because an unknown share of those who use cannabis and opioids do so for medical reasons, especially pain relief, but the survey does not ask about that. 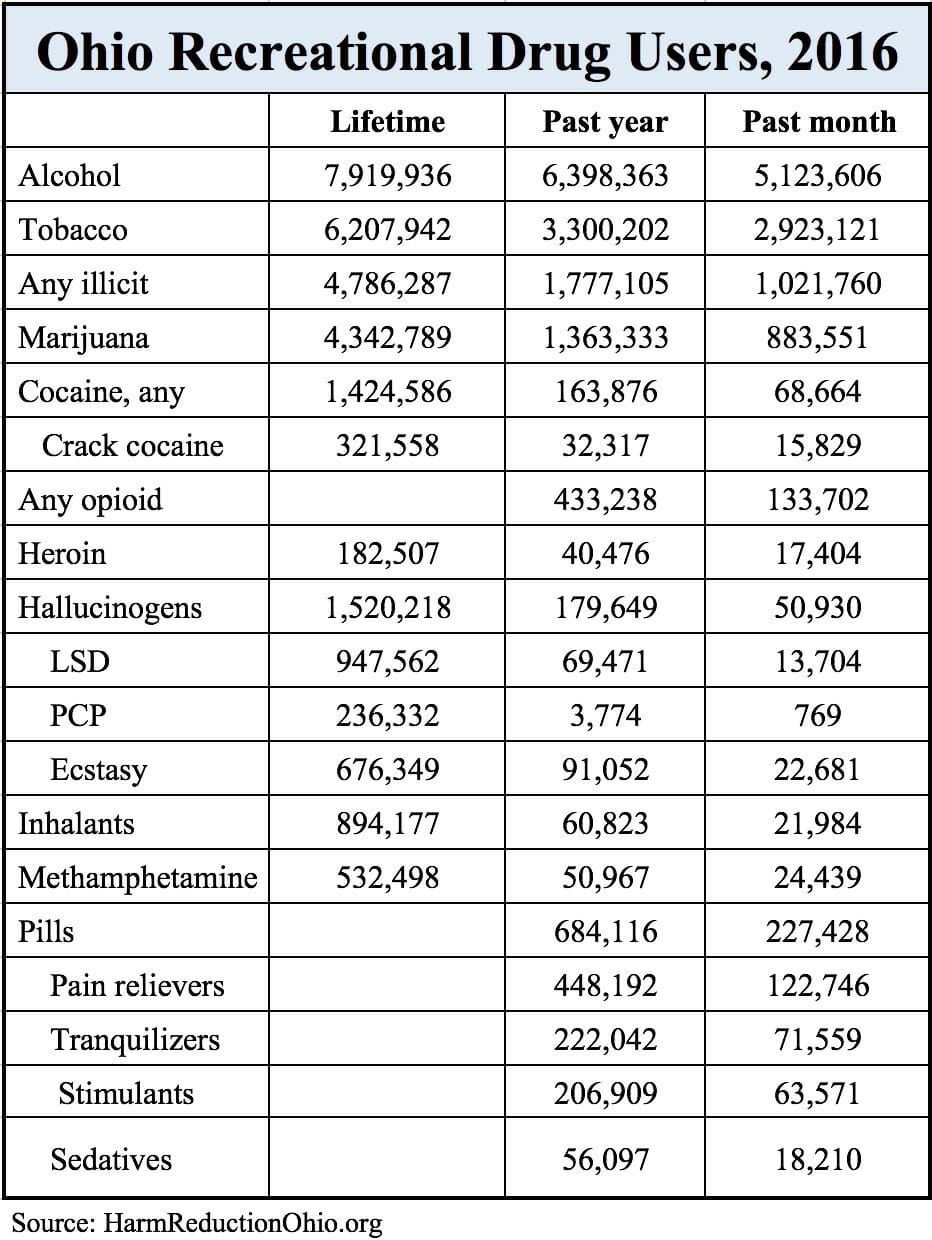 As you can see in the above chart, having legal status is an advantage competitive advantage for drugs, helping propel two of the more dangerous recreational drugs — alcohol and tobacco — into the top two slots for most used drugs.

The next chart has the same information as the one above, except it shows the results as a percentage of Ohio’s 12 and older population. 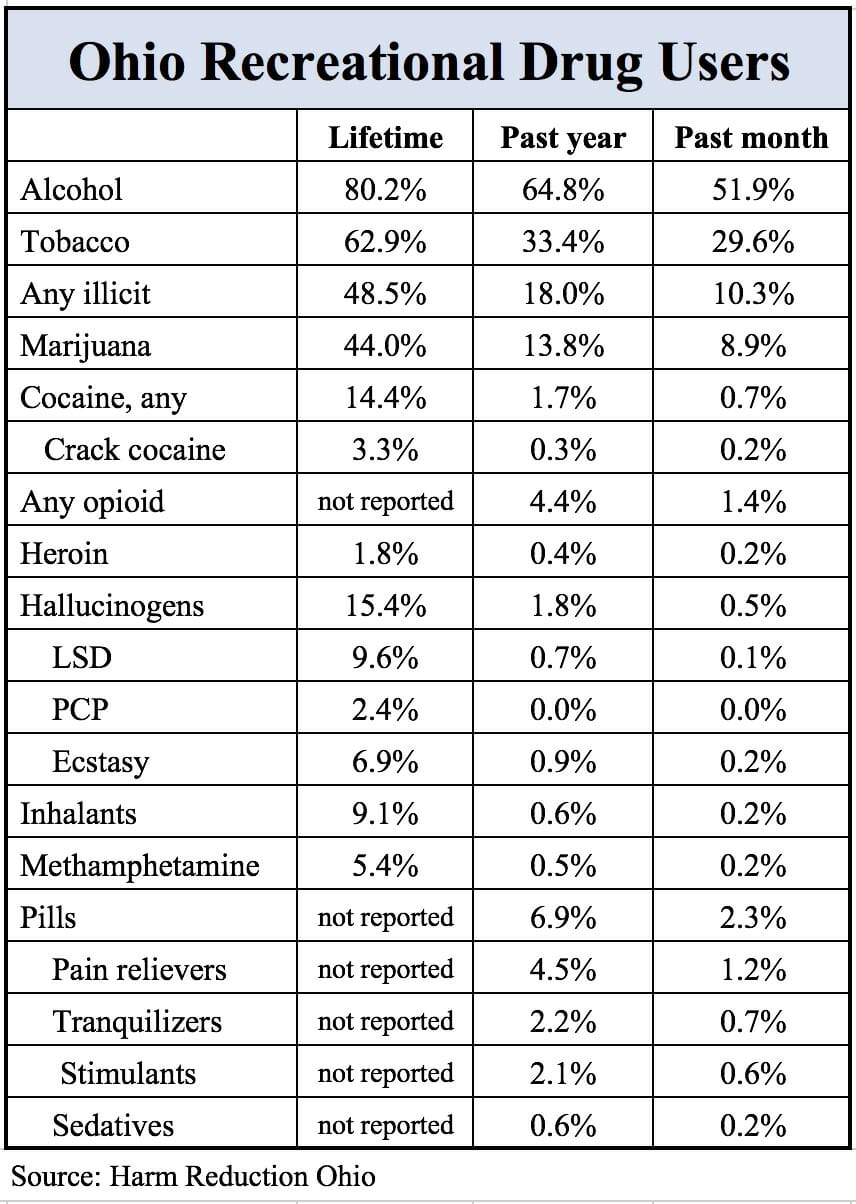 Every drug is different, in effect and danger. Illegal drugs have an added danger that users can only guess at what’s in them.

Today, Ohio is suffering a horrifying number of prohibition-related deaths from drugs contaminated by fentanyl and its many variants. Fentanyl is a  which are smuggler-friendly, all-purpose potency boost. It is not super-strong heroin. In Ohio, fentanyl now kills more cocaine users than heroin users.

The next chart lists how many Ohio residents use drugs that may contain fentanyl or an analog. The ranking is subjective, based on my review of autopsy data and drug seizure lab reports.

And, finally, a close look at Ohio’s opioid users who don’t have prescriptions.