How to Save the Ship: Update on $1 billion OneOhio Opioid Settlement

Thanks to everyone for the great turnout last night for an update on the $1 billion OneOhio Opioid Settlement!

The PowerPoint presentation for the Update is below. A video of the event can be watched here. (Note: Video starts about in a minute into the event.) A snippet from the event was on 11 p.m. newscast of News 5, the ABC affiliate in Cleveland. 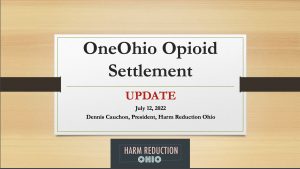 A total of 49 people attended. More than half stayed until the end two hours later! (Such passion — and stamina!)

Nothing About Us Without Us

The update focused on a serious problem with OneOhio: the systematic exclusion of people impacted by opioids from having involvement or a voice in how the $1 billion settlement will be used. This is not acceptable anywhere and especially not in a state that’s suffered 35,000 opioid overdose deaths since 2007.

Harm Reduction Ohio, an organization represents the impacted population, is committed to making sure that people with lived and shared experience are the primary decision-makers in how money paid as compensation for these 35,000 dead Ohioans is spent.

The two-hour OneOhio opioid settlement update confirmed there is:

“Friends of OneOhio” is being created to serve as the primary, one-stop, all-inclusive, statewide advocacy group for the impacted population to be involved in OneOhio spending decisions at the state, regional and local levels.

A web site and social media presence are being prepared. “Friends of OneOhio” meetings will be held online and across the state over the next few months.

Please join “Friends of OneOhio.” We’ll contact you soon about what’s next. Together, we will make a difference. Let’s save some lives.