Deaths from meth and fentanyl more than double in 2017 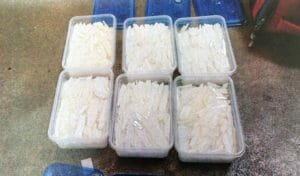 Overdose deaths in which both methamphetamine and fentanyl were found in the victim’s system increased from 117 deaths in 2016 to 283 deaths in 2017, the Ohio Department of Health said preliminary data show.

“I am extremely grateful that the state is expanding its view of what’s happening,” Cauchon said. Marijuana and psilocybin mushrooms are the only illegal drugs that have escaped adulteration from fentanyl and its analogs.

The 283 meth overdose deaths involving fentanyl include analogs, such as carfentanil and furanylfentanyl. For reasons that aren’t clear, carfentanil made up a greater share of meth and cocaine adulteration in 2017 than it did in heroin, according to drug seizure data.

Carfentanil is extremely dangerous because it’s active in even tinier doses than fentanyl. Unlike heroin users, most meth and cocaine users have no opioid tolerance, so even extremely tiny amounts of fentanyl or related drugs can be fatal.

First overdose death in Akron in 2017.

The state’s data counts when drugs are mentioned on a death certificate, usually after a lab test is done during an autopsy. However, alcohol and other illegal drugs likely played a factor in some of the 283 meth-fentanyl deaths.

About 51,000 Ohio residents use use meth at least once a year, and a little more than 500,000 have used it during their life. About 40,000 Ohioans have used heroin and 160,000 have used cocaine in the past year, according to the annual federal drug use survey.