For the first time in decades, black Ohioans are dying of drug overdoses at a faster rate than whites.

The change represents a reversal of a longtime racial gap that had made white Ohioans, especially working class whites, the primary victims of an overdose epidemic that has claimed the lives of more than 30,000 Ohio residents in the last decade. Racial differences have resulted in the overdose epidemic being labeled (largely correctly)  as “a white things.”

Comedian Dave Chappelle even did a brilliant comedy routine about the racial disparity just last October on his special, Netflix is a Joke. “These white folks look exactly like us during the crack epidemic,” he said

“I even have insight into how the white community must have felt watching the black community go through the scourge of crack — because I don’t care either. Hang in there, whites. Just say no! What’s so hard about that?” he joked.

But even as Chappelle told the joke, it was already outdated. As he spoke, black Ohioans were dying at a faster rate from overdoses than white Ohioans. The racial gap had crossed the line and reversed itself. 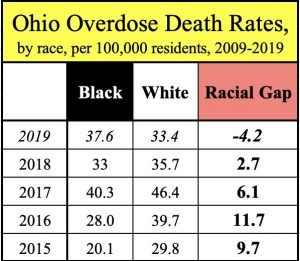 Race and overdose death in Ohio

For many years, black overdose death rates were one-third to one-half lower than for whites. But in mid-2016, that started to change.

Since then, the the trend has moved in the opposite direction. in 2019, death crossed the racial divide. Black Ohioans died of accidental drug overdoses at a significantly faster rate than whites. Last year, the black death rate was more than 10% greater than the white death rate.

Ohio has undergone an astounding reversal of a racial gap that had stood for decades, since even before prescription opioids and heroin caused historic levels of overdose death.

The primary cause is the expansion of fentanyl and fentanyl analogs into the cocaine supply. Drug use has not gone up among blacks (or whites). Rather, the drug supply has gotten more dangerous, across the board. All drugs, except marijuana, carry risk of death from fentanyl adulteration. Fentanyl, an opioid, first entered the supply of heroin, also an opioid.

“Poor white people love — I mean fucking love — heroin,” observed Chappelle in his show. Federal drug use surveys confirm that whites tend to prefer opioids while  blacks (and affluent whites) tend to prefer cocaine. Since the 1970s, heroin-related deaths have tended to be “a white thing” while cocaine-related deaths have tended to be “a black thing.”

We issued a “Special Report: Race and ethnicity in Ohio overdose deaths” on Martin Luther King Day in January 2018. In May 2018, HRO asked directly why the increase in black deaths was being ignored. “Is race playing a role in Ohio’s slow response to cocaine-fentanyl overdose deaths?” the headline asked. This chart ran with that story. 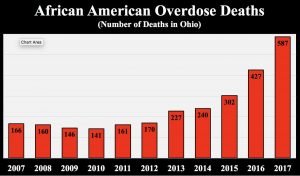 This chart below shows age-adjusted overdose death rates in Ohio for the last 12 years. Last year was the tipping point. The age-adjusted death rate for blacks was 37.6 deaths per 100,000 residents in 2019 vs. 33.4 for whites. The racial gap was 4.2 percentage points. 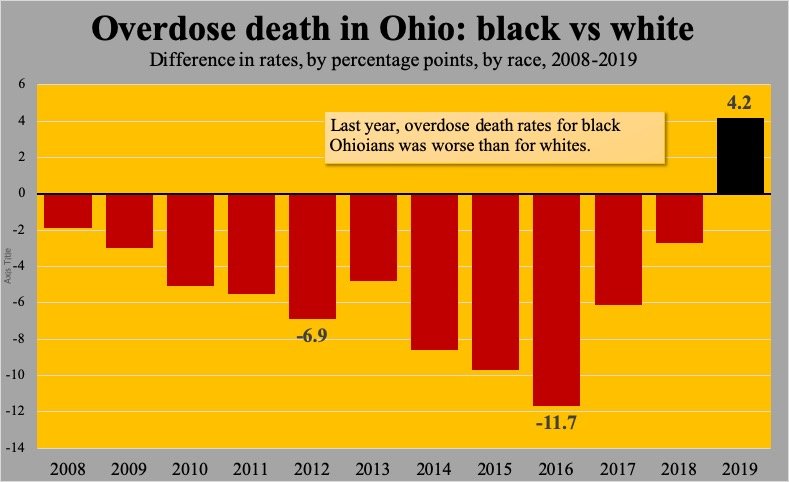 How much fentanyl is in cocaine? 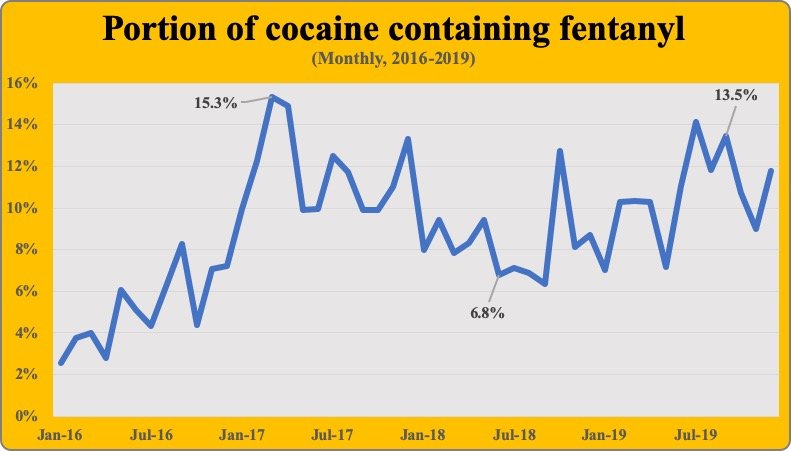 The rise in overdose deaths among black residents started in earnest in mid-2016 when fentanyl moved into Ohio’s cocaine supply. The chart above shows the portion of cocaine containing fentanyl or a fentanyl analog monthly in Ohio since 2016, based on crime lab analyses of seized drugs.

Cocaine becomes even more dangerous when the adulterant is carfentanil, an ultra-potent analog. Carfentanil needs to be tracked separately from fentanyl and the other analogs to understand the risk in the drug supply and how many people will die.

The failure to look at the chemical composition of the drug supply causes public health officials and law enforcement to misunderstand why overdoses rise and fall.  It would be like trying to understand traffic fatalities without considering the most important variable: the role of alcohol.

Dayton attracted international attention as “the heroin capital of the world” when overdose deaths soared in 2017. Must be heroin was the assumption. In fact, fentanyl-laced cocaine (especially carfentanil-laced cocaine) caused the death surge, not heroin.

The rise and fall of overdose deaths among black Ohioans tracks changes in the chemical composition of the overall drug supply, especially the cocaine supply.

A look at the chemical composition of Ohio’s cocaine supply by year (rather than month) helps understand the big picture. 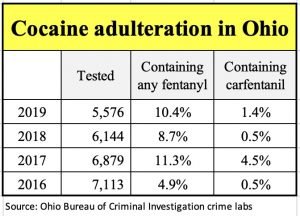 But something even scarier is happening to the cocaine supply that this data does not capture. An increasing number of what’s sold today as “cocaine” has no cocaine, only a fentanyl plus perhaps caffeine or over-the-counter drugs. The same is true of meth. In the crime lab data, this “cocaine” will appear as fentanyl, not as fentanyl in cocaine. The same is true of meth. For a cocaine buyer, the chance of getting fentanyl is much higher than the approximately 10% chance of getting fentanyl-laced cocaine.

Even cocaine users who like to combine cocaine and opioids into a “speedball” are more likely to die from fentanyl-laced cocaine. People who combine cocaine and heroin/fentanyl into a speedball prefer to mix the two drugs on their own, doing the doses separately (one after another, perhaps a few minutes apart) or mixing the drugs into a desired ratio.

This is dangerous to do in fentanyl-drenched Ohio. When both the cocaine and the opioid have a fentanyl or carfentanil in them, a speedball will contain double, triple or more of the opioid dose than usual.  Potency becomes even more unpredictable and potentially deadly.

In Ohio today, a little bit of fentanyl can kill a lot of cocaine users.

What do do about fentanyl in cocaine

Drug checking is the only way to significantly reduce overdose death during an era drug prohibition and widespread drug adulteration. Remember, every overdose death is an accident and preventable. People die because they don’t know accurately what’s in the product they are consuming.  Fentanyl doesn’t kill people. Too much fentanyl kills people.

The drug war causes overdose death. Regardless of the drug war’s intent, the effect will always be high levels of accidental death from impure substances consumed in unknown doses. Prohibition kills. Always has, always will, is doing so right now.

As a practical matter, people who use drugs can’t wait for an end of the drug war. Cocaine users should do the following to stay safe:

Use fentanyl test strips to test for adulteration. Fentanyl test strips are far more valuable to cocaine and meth users than to heroin users. Today, people who use the opioid heroin in Ohio expect the opioid fentanyl will be in the mixture. But few cocaine or meth users want fentanyl in their stimulant, and even at a contamination rate of 10%, cocaine usually doesn’t have fentanyl. Thus, a positive test that cocaine includes fentanyl is actionable information — “news you can use.”

Carry naloxone (Narcan). And ask those you interact with to carry it too. Naloxone works only to reverse opioid overdoses. It won’t reverse a stimulant-related overdose. However, naloxone won’t harm a person having another kind of problem, so administering naloxone won’t make things worse. An opioid overdose causes breathing to slow and stop. Loud snoring may occur. A white person may look blue-ish. A black person may look more ashen. Cocaine and meth overdoses are different, usually a heart attack or a seizure. In a panic situation, these distinctions can be hard to make. Give naloxone.

Never use alone. And when using with another, wait two to five minutes before the second person consumes. Make sure the person you’re with is OK before using your drug and expect them to do the same. Ohio has had many cases of two people dying together, sometimes in each others arms. Be safe.