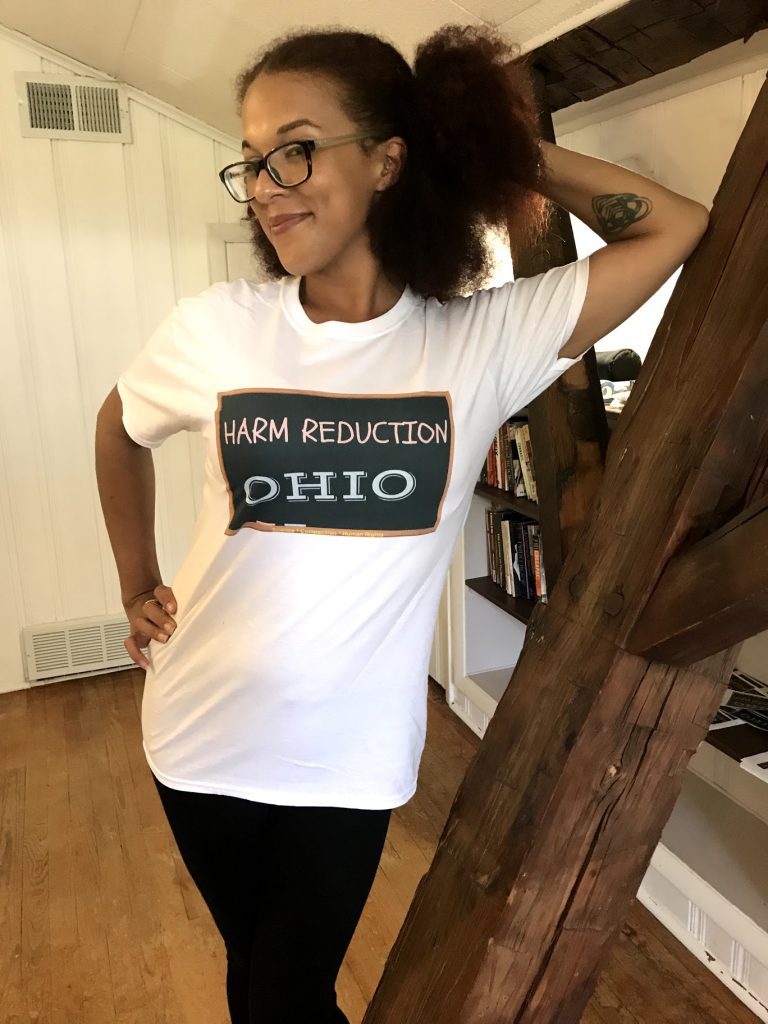 Very sad news to report: Dylan Stanley, our former director of community outreach, has died of a probable overdose. The Ohio harm reduction community’s heart is broken for the loss of a beautiful soul.

Dylan was one of the smartest, most articulate, dynamic harm reduction activists in Ohio. In one of our last conversations, we talked about her writing and starring in a one-woman show about her life. It would have been amazing!

Dylan was the greatest public speaker in Ohio on the subject of harm reduction. She was overflowing with brilliance, charisma and wit. Dylan spoke for Harm Reduction Ohio and people with lived experience at conferences held by the Ohio State University, the Ohio Department of Health and many others.

To get a sense of Dylan’s brilliance and verve, watch her speak (for the first time in public!) at a forum in Newark, Ohio, on the value of syringe service programs (“needle exchanges”) and the SafePoint program in Columbus. She spoke without notes, advanced preparation or foreknowledge that she would speak at all.

Dylan also struggled with drugs and mental health issues — and the current systems in place to help people with such problems never worked for Dylan. Dylan was at her best and happiest on methadone. But the heavy regulations that limit access to methadone made it nearly impossible for her to stay on the medication that worked for her.

To get methadone, Dylan had to take a pair of city buses (a one-hour, two-bus trip each way) across town every day so she could wait in line at dawn, day after day, for one dose of methadone. This was never going to work for Dylan long-term. And it didn’t.

Dylan was — in her heart, her soul, at her core — an independent free spirit. She was a force to be respected, worked with and reckoned with, not someone to control at every step.

Dylan, 30, was originally from Grandview Heights and lived in Columbus. She had a daughter, Ruby, who she loved very, very much. Dylan had struggled especially hard in recent years since the death of her mother, who had been Dylan’s anchor of support for most of her life.

“She was a warrior, a survivor of the streets who would have run a kick-ass safe consumption site,” says Harm Reduction Ohio’s Montgomery County director Shelia Humphrey-Craig, a friend and mother-like figure who helped Dylan often. “She was an advocate for mothers’ rights who had no home of her own.” 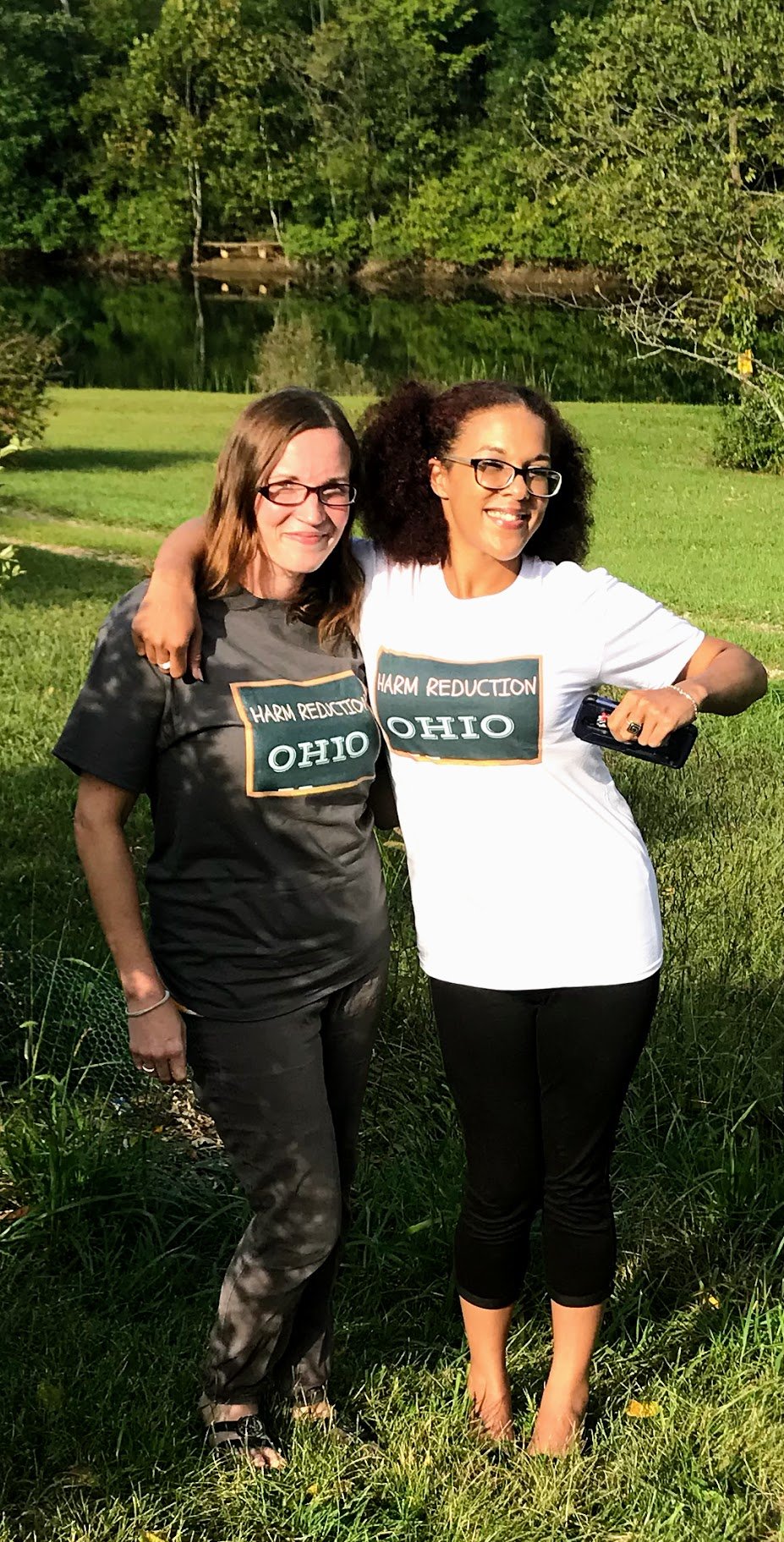 Our former advocacy director Taylor Bennett was especially close to Dylan and brought her into Harm Reduction Ohio. Our hearts go out to Taylor (shown above with Dylan) for the loss of such a close friend and harm reduction partner.

Dylan came to Harm Reduction Ohio as outreach director in 2018. She fell away, slowly, in late 2019 as her struggles grew. We stayed in touch and supplied her with Narcan and other harm reduction supplies whenever possible.

What Dylan needed was a safe consumption site, a place where she could use opioids and function as a productive member of society. The photo below touched me deeply today. It shows Dylan at last year’s Harm Reduction Ohio “Family Matters” conference in front of our model safe consumption site, which Sheila Humphrey-Craig designed and takes around Ohio. 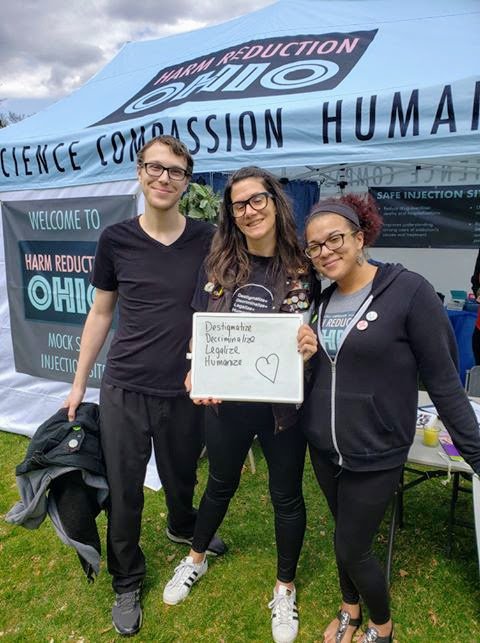 We were too slow, Dylan, in making the safe consumption site you needed a reality. Sorry.

Even while struggling, Dylan was an important harm reduction force for good in the community of people using drugs in Columbus. She distributed Narcan religiously to dozens of active opioid users who were at extreme risk of overdose death.  Personally, she administered Narcan to save the lives of more than two dozen people who had overdosed.

Dylan’s life was stormy. But even during tough times, she was a force for good, a lighthouse that shined brightly during the storm. Dylan meant a lot to Harm Reduction Ohio and many other people.

Rest in peace, Dylan. This world was never meant for someone as beautiful as you.