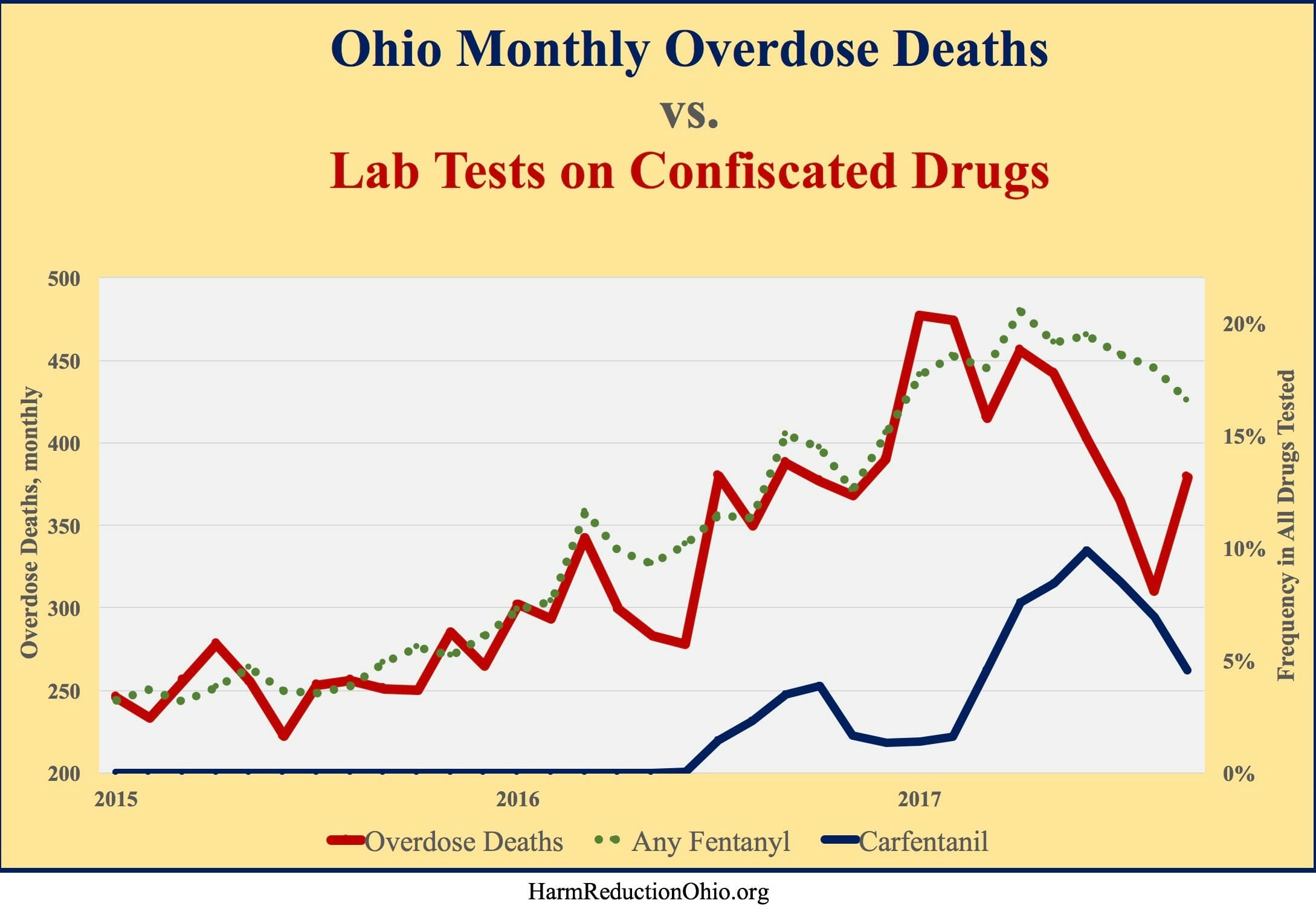 Harm Reduction Ohio obtained the lab results of all illegal drug tested at Ohio’s three state crime labs from January 1, 2015 through March 30, 2018. That’s more than 138,000 drug samples seized by law enforcement in every Ohio county during the heart of the overdose epidemic.

These 100,000+ lab analyses constitute the largest dataset obtained outside of law enforcement on what controlled substances are actually found in illegal drugs. This article, the first in a series, will analyze the data from a public health perspective.

BCI general counsel Zahid Siddiqi to obtain the data without filing a formal public records request. The data does not include any names, such as those of defendants or police officers.

“BCI was great to work with, very thoughtful and professional,” Cauchon said. “‘After initially being reluctant to provide the information, BCI was remarkably helpful, which showed a real concern about drug overdose deaths, not just helping police convict people on drug charges,” Cauchon said.

What’s in the data

The drugs were sent to state crime labs for analysis by hundreds of local law enforcement agencies throughout Ohio. The drugs were obtained when people were arrested on drug charges. The dataset does not include submissions made to Ohio’s local crime labs.

With the help of others, Harm Reduction Ohio will fully analyze how the chemical composition of Ohio’s illegal drug supply changed during the drug overdose epidemic. The goal is epidemiological: to help public health authorities, elected officials, drug users, drug dealers and the general public understand and reduce overdose death in Ohio.

Future articles will look at differences between large seizures and street level ones, as well as regional differences in Ohio.

Carfentanil: Death in your hometown

This chart shows the percentage of all 106,000 drugs tested containing carfentanil. (A breakdown by drug is provided later.) 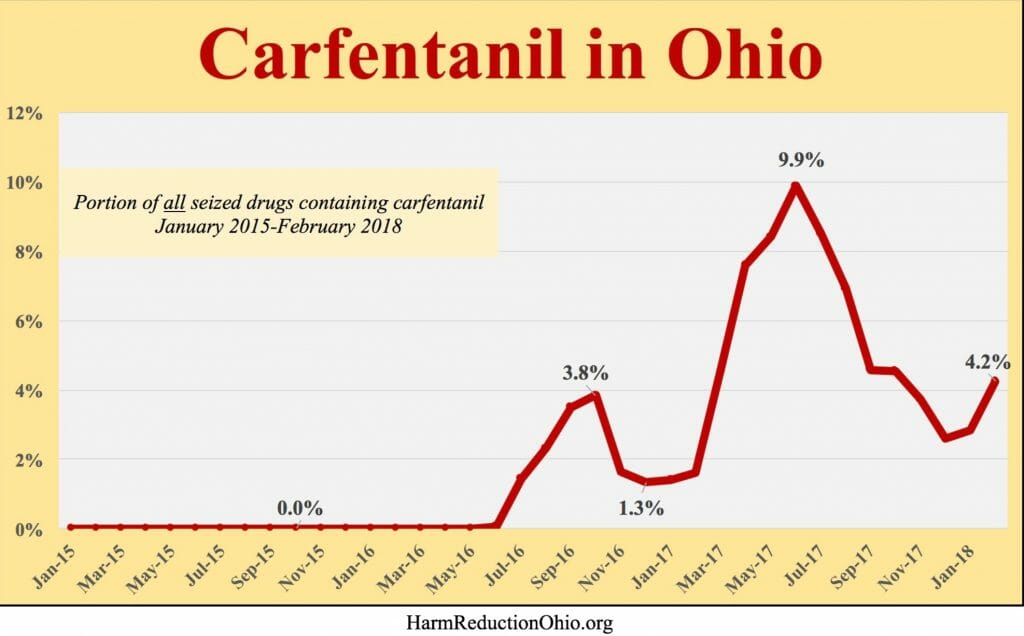 Overdose deaths have fallen somewhat in the second half of 2017, consistent with a decline in carfentanil’s presence. However, since the drug is still here, deaths have not returned to pre-carfentanil levels.

The next chart shows how overdose deaths closely tracked carfentanil’s expansion into the Ohio drug supply, The chart may seem a little complicated at first, but it’s worth understanding. I’ll explain further below. 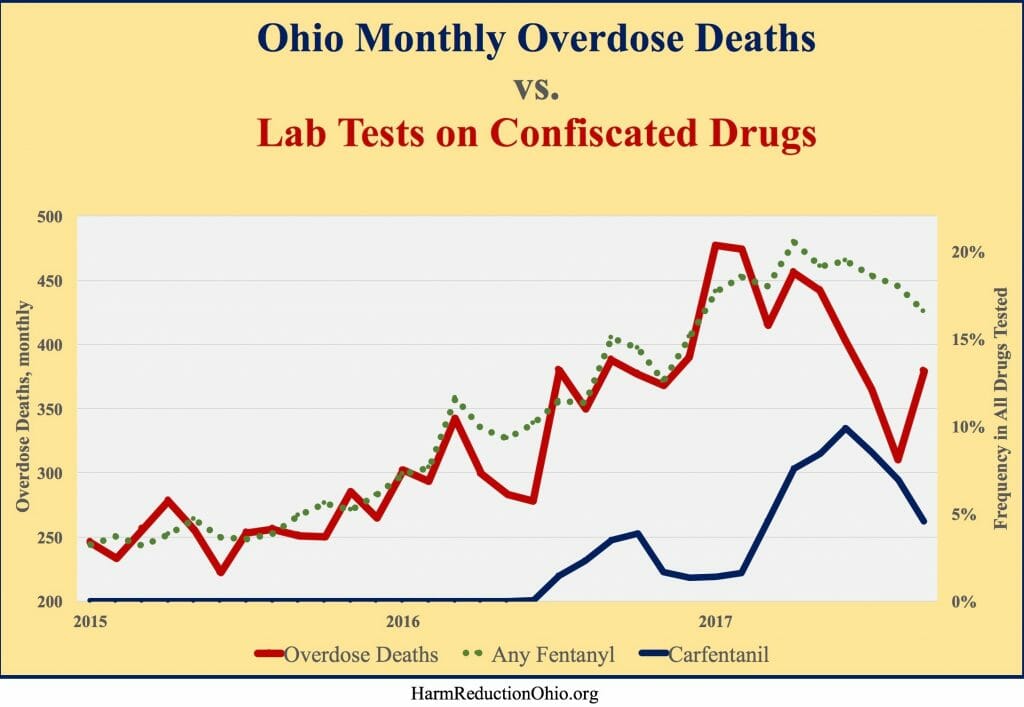 The red line shows the number of overdose deaths per month in Ohio from January 2015 through September 2017, according the Ohio Department of Health mortality database. The number of deaths for the last three months of 2017 and early 2018 are not complete enough to use, so this chart stops at September 2017 while the first chart shows data through February 2018.

The dotted green line shows the percentage of all confiscated drugs containing a fentanyl of any kind, including carfentanil. The blue line shows how frequently carfentanil was found.

The chart shows that carfentanil accounted for an increasingly larger share of the fentanyls used to adulterate Ohio drugs. In fact, at carfentanil’s peak in June 2017, it was found in 51% of all drugs containing a fentanyl. Throughout the spring and summer of 2017, carfentanil was more common in Ohio than actual fentanyl!

How dangerous is carfentanil?

Carfentanil is the most powerful variant of fentanyl currently known. It is used legally as a large animal tranquilizer.

The drug’s pain-killing ability is estimated to be 100 times that of fentanyl by weight and 5,000 times that of heroin. However, almost nothing is really known scientifically about its relationship to the actual cause of overdose death: respiratory depression, or slowed breathing. Nor is anything really known scientifically about its ability to cause euphoria or sedation in humans.

When it comes to carfentanil’s overdose risk, the ratio of 100 times more potent than fentanyl could be too high, too low, or about right.

Regardless, it is clear that carfentanil requires precise dilution while in liquid form, a process that can be done properly only at a skilled pharmaceutical factory. In illegal markets, powdered drugs are haphazardly mixed by people who have little experience in chemistry and who often don’t know what’s in a drug mixture anyway.

The drug war’s relentless pressure on smugglers, sellers and users to switch from bulky drugs (heroin, morphine, opium) to tiny, compact ones is why carfentanil is used in drug markets. Small drugs are a rational choice for smugglers and dealers.

Consumer demand does not exist for carfentanil. Many users believe they can tell the difference between heroin and fentanyl. (Heroin produces more euphoria and a longer-lasting feeling of well-being, making it the preferred choice of most users.) But users rarely know they’re consuming carfentanil and won’t make claims for its effect beyond its power.

Carfentanil isn’t the result of a hole in law enforcement response to drugs. It exists because of law enforcement. Although it may seem counterintuitive, easing up on heroin — by reducing sentences and cutting back on eradication of poppy fields — is the smart “supply side” way to get rid of carfentanil and reduce overdose death.

Law enforcement drug seizures appear to pick up changes in the chemical composition of the illegal drug supply after they start to be seen in autopsy results. In other words, drug seizure data appear to lag — rather than predict — overdose deaths.

The lag was first reported in Harm Reduction Ohio’s study of the relationship between seized drugs and overdose deaths in the Dayton area. The lag in that study was about three months. The statewide Ohio data show a similar pattern.

Why do changes in overdose deaths occur slightly before changes are seen in drug seizure data?

A possible reason is that drug users get newly introduced drug mixtures first. This results in overdose deaths rising or falling promptly based on changes in the chemical composition of the illegal drug supply. Arrests pick up the changes later and more slowly.

For example, if carfentanil enters a drug market, deaths will immediately increase — even if carfentanil is only in 1% of the area’s drug supply. Over time, as arrests continue, law enforcement will collect more drug samples that can be used understand broader market trends.

Consider: Overdose deaths rose to unprecedented levels in Ohio from July 2016 through July 2017, peaking at 477 and 474 fatalities in January and February 2017, respectively.

The state’s drug seizure data took a while to catch up to autopsy data. In BCI crime lab tests, the frequency of carfentanil in confiscated drugs didn’t exceed 3% until September 2016.

Deaths also began to decline before drug seizure data recorded a decrease in carfentanil, which peaked in frequency at 9.9% in June 2017 — and exceeded 7% in April, May, June, July and August of 2017. Not seen immediately in law enforcement drug seizure data was that, overall, users (early adopters, so to speak) were consuming (slightly) less dangerous drug mixtures.

The spread of carfentanil from heroin into all illegal drugs — except marijuana, mushrooms and LSD — pushed overdose deaths deeply into new and larger populations of drug users, especially cocaine and meth users. It is a change Ohio officials, focused on heroin, still have not grasped.

This is an important question because most cocaine and meth users lack opioid tolerance, making them more vulnerable to overdose death than a regular heroin user.

A relatively small amount of fentanyl-laced cocaine can kill large numbers of people. Ditto for meth. 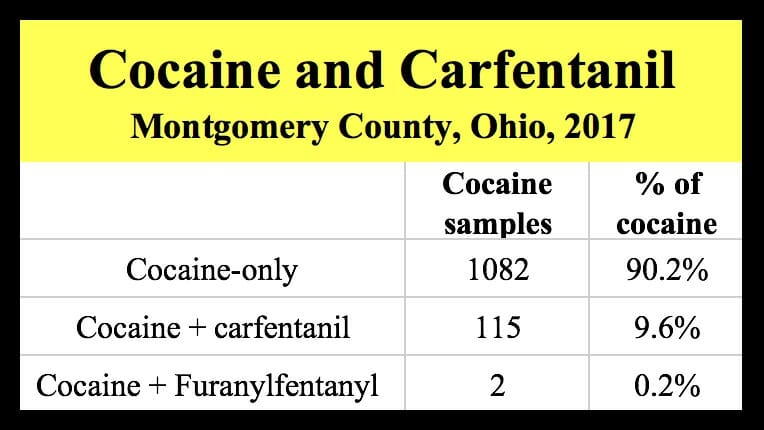 The statewide data is consistent with these results.

This next chart shows the percentage of cocaine containing any fentanyl (blue line), including carfentanil (shown with a red line). 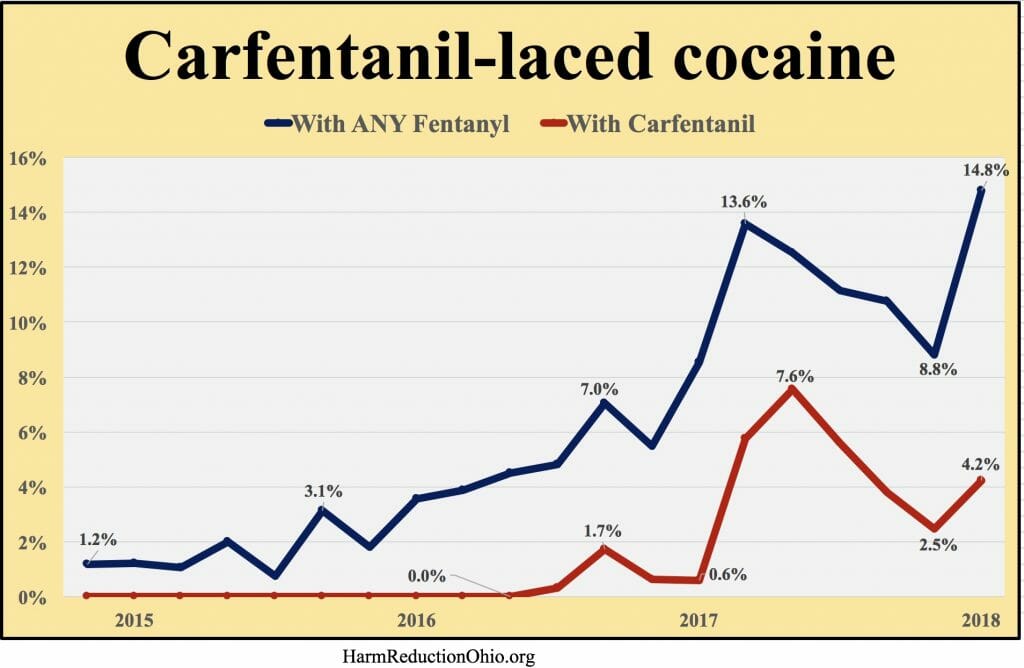 The share of cocaine containing any fentanyl was higher than 10% for most of 2017 and reached the highest level ever in the first two months of this year. Carfentanil accounted for a large and deadly share of this adulteration.

For methamphetamine, the frequency of any fentanyl was lower — about 3% for the last 18 months, about half of that being carfentanil — but this small percentage is still causing a considerable number of deaths because of a lack of opioid tolerance and because far more Ohioans use meth than use either cocaine or heroin.

Heroin has the highest frequency of having been mixed with any fentanyl, including carfentanil. 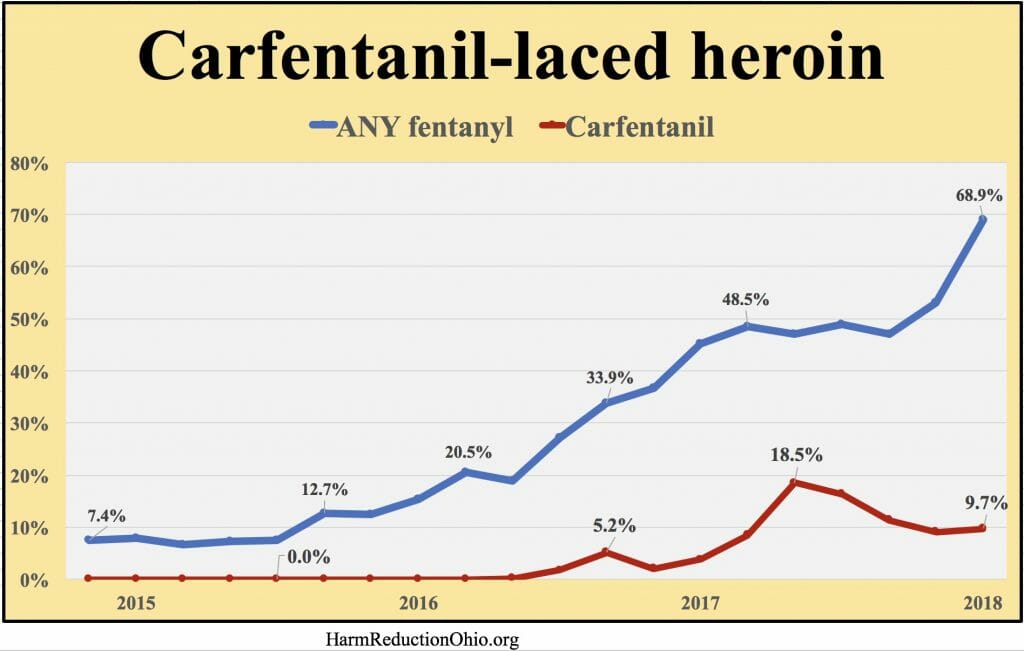 The numbers show fentanyl was well-established as a heroin adulterant in 2015. By contrast, fentanyl didn’t enter the cocaine and meth supply until 2016. That changed the reasons for overdoses and the demographics of the victims.

Ohio’s response to drug overdoses has been increasingly misdirected and ineffective because it missed and underestimated overdose deaths shifting to cocaine and meth users. Ohio remains focused almost exclusively on heroin addicts and opioid users, which describes the epidemic in 2015 but not 2018.

With both fentanyl and carfentanil, the trend happened first in the heroin supply…then six months later moved on to meth and cocaine, both handled largely by the Mexican supply chain. Marijuana and mushrooms (produced in the United States) and LSD (produced mostly in Europe) have so far escaped fentanyl contamination in Ohio.

Carfentanil’s importance in driving overdose deaths can be seen another way: by measuring carfentanil’s frequency in fentanyl-containing drugs. 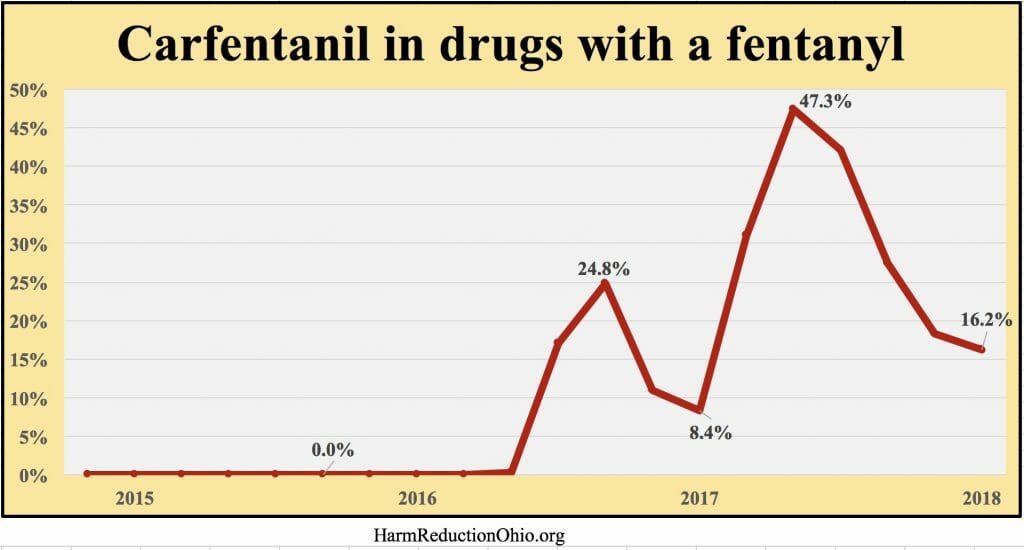 This chart shows data in two-month increments. At its peak last year, carfentanil accounted for roughly half of the fentanyl variants used in Ohio — a heartbreaking number that should take your breath away, just as it did to so many drug users.

Carfentanil’s commonness in Ohio’s drug supply has fallen since last summer, as has the pace of overdose deaths in Ohio.

Still, the volume of carfentanil and overdose deaths remains extremely high, and some evidence points to deaths and carfentanil rising again in early 2018, although it’s too soon to say for sure.

Ohio’s “blame the (opioid) addict” ethos has been a catastrophic public health failure.

The state’s obsession with blaming a fixed cast of characters — heroin addicts, over-prescribing doctors, drug distribution companies, etc. — has caused an institutional blindness that has obscured the epidemic’s epidemiology:  understanding who is actually dying and why.

Ohio’s drug overdose epidemic is a human-made catastrophe. The cause is contamination of the illegal drug supply consumed by 1.8 million Ohioans every year. Heroin addiction and drug use isn’t driving the epidemic of drug overdose deaths. Contaminated and adulterated heroin, cocaine, meth and fake pills are the cause.

If 5,000 Ohioans died instantly last year from adulterated tobacco, would we blame smokers? Or would we think: “Yes, tobacco is dangerous but it shouldn’t cause immediate overdose deaths. What might be in the tobacco that’s causing these deaths? And what might be the cause?”

All drugs carry varying degrees of danger. But the deaths of 60,000 Americans and 5,000 Ohioans annually is evidence of a policy failure, not the need to carry on as usual.

Ask the wrong questions and you get the wrong answers. The objective questions to ask are hinted at in drug seizure data:
(1) What exactly is causing sudden overdose deaths? and
(2) Why do so many drugs contain deadly contaminants and adulterants?

May I suggest a hypothesis: Prohibition kills. Always has, always will. Is doing so right now.