Overdose death decline of 2018 does not last 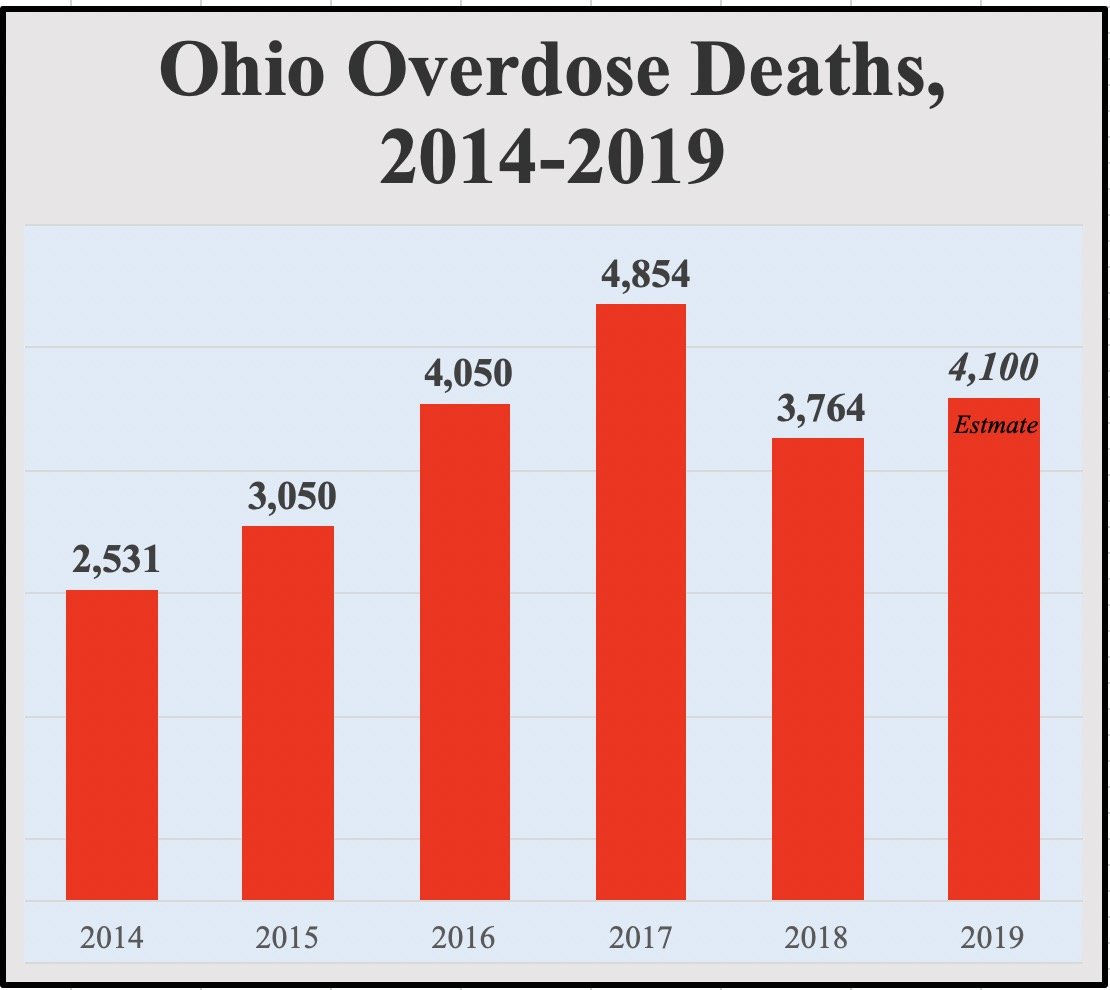 Drug overdose deaths in Ohio will exceed 4,000 in 2019, resulting in the second-worst annual death toll reported in Ohio during the decade-long overdose epidemic.

Harm Reduction Ohio estimates that overdose deaths climbed in 2019 to about 4,100, an increase of about 8% from 2018. The estimate is based on the 88% of deaths already reported in the Ohio Department of Health mortality database. (More details here.)

In 2018, the number of fatal overdoses in Ohio fell 22% to 3,764. This drop brought some optimism that Ohio may have turned the corner in the overdose epidemic. That turned out not to be the case.  Overdose deaths started rising almost immediately in early 2019 and accelerating at a greater pace in March. 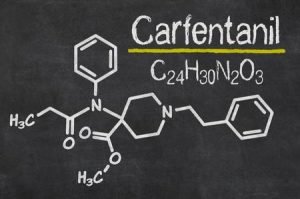 Deaths soared in northeast Ohio (Canton, Akron, Warren), especially in the first half of the year.  This area had had some of the lowest overdose death rates the previous year. In the second half of 2019,  central Ohio experienced a sharp increase in overdose deaths, a surge that appears to be continuing in 2020.

The re-emergence of carfentanil, an ultra-dangerous fentanyl analog, caused soaring death numbers in northeast Ohio. The cause of the current increase in overdose death in central Ohio is not yet known.

Harm Reduction Ohio issued two emergency warnings last year that carfentanil had returned to Ohio and had triggered a rise in overdose death. Both warnings were based HRO’s analysis of state crime lab data, provided quarterly from the Ohio Bureau of Criminal Investigation.

Harm Reduction Ohio first reported in May 2018 that the chemical composition of the illegal drug supply — as shown in crime lab data of what’s in drugs seized from people who use and/or sell drugs — is the primary determinant of the level of overdose death.  The importance and accuracy of drug seizure data and confirmed in two medical journal articles published in November 2019 and March 2020.

Carfentantil kills at a level unlike any other drug, including fentanyl and its many other analogs. Carfentanil was almost entirely responsible for a death surge that cause about 5,000 overdose deaths in the second half of 2016 and the first half of 2017. This surge put Ohio in the national news and got Dayton/Montgomery County inaccurately labeled as the heroin overdose capital of the nation. In fact, the primary cause of Dayton’s death surge was carfentanil, especially in cocaine. (See Harm Reduction Ohio’s May 28, 2018, report: “STUDY: Carfentanil in cocaine caused overdose death spike in Dayton.”) 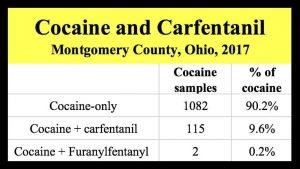 Remember when Dayton was the nation’s “heroin overdose capital”? It wasn’t. The death surge was caused by fentanyl analogs in cocaine.

This time, carfentanil has not returned to Dayton.  Overdose deaths in Montgomery County are on track to remain unchanged in 2019. The death rate is about half the level of the county’s 2017 peak. 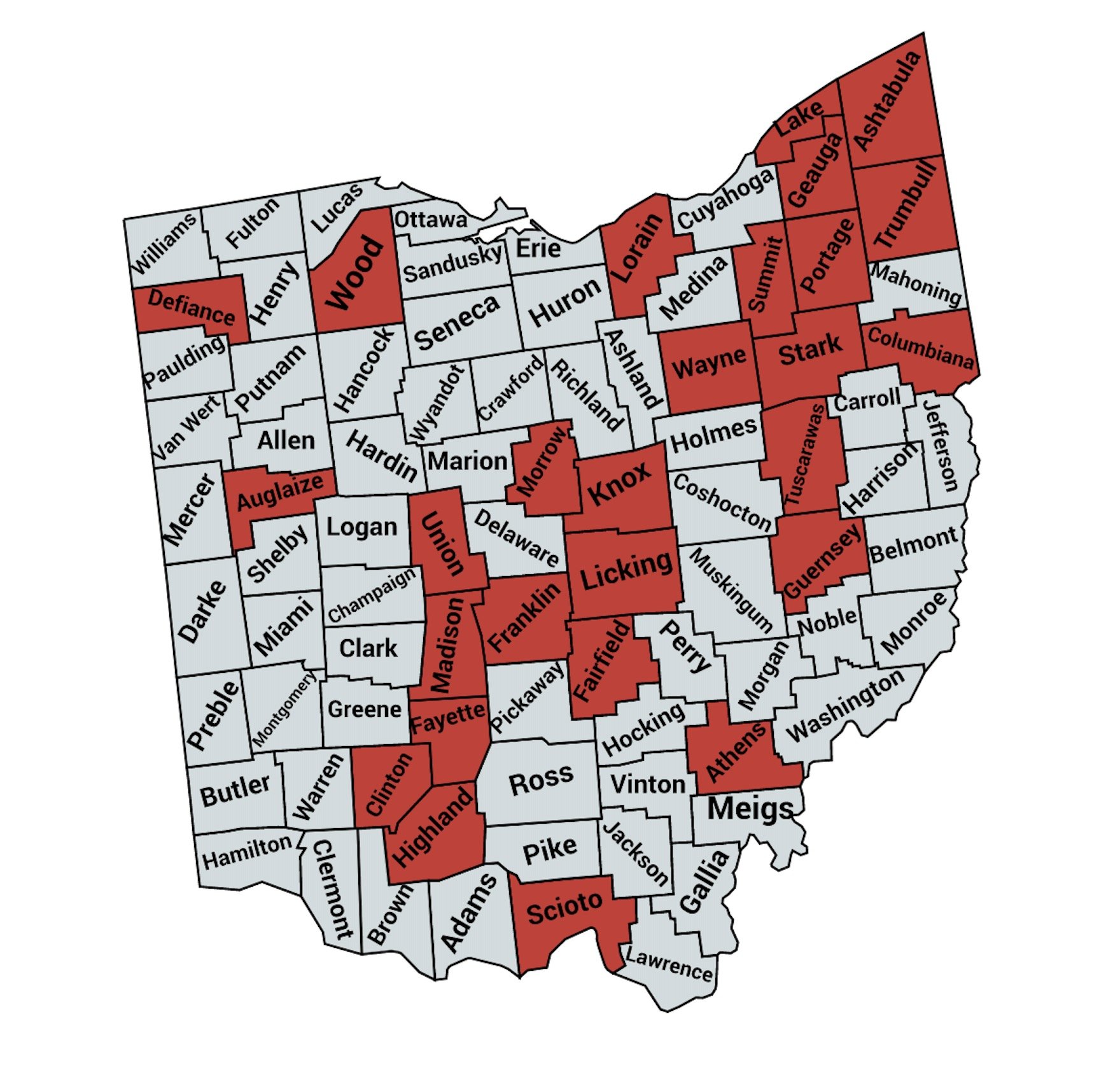 Where deaths are rising and falling

The map above shows Ohio counties thad have already suffered more confirmed overdoses — confirmed by the National Center for Health Statistics — even though only 88% of death data is complete.

Overdose death patterns differ markedly from the pattern of five years ago when the crackdown on prescription opioids sent people who use drugs to illegal markets, triggering a sharp increase in death from impure drugs.

This year, the once hard-hit Appalachian counties in Ohio’s southeast and the counties surrounding Dayton have not experienced an increase in overdose deaths. (One exception: Scioto County (Portsmouth) has already has recorded 79 confirmed overdose deaths this year — the most ever. The cause of this overdose death surge is unclear.) 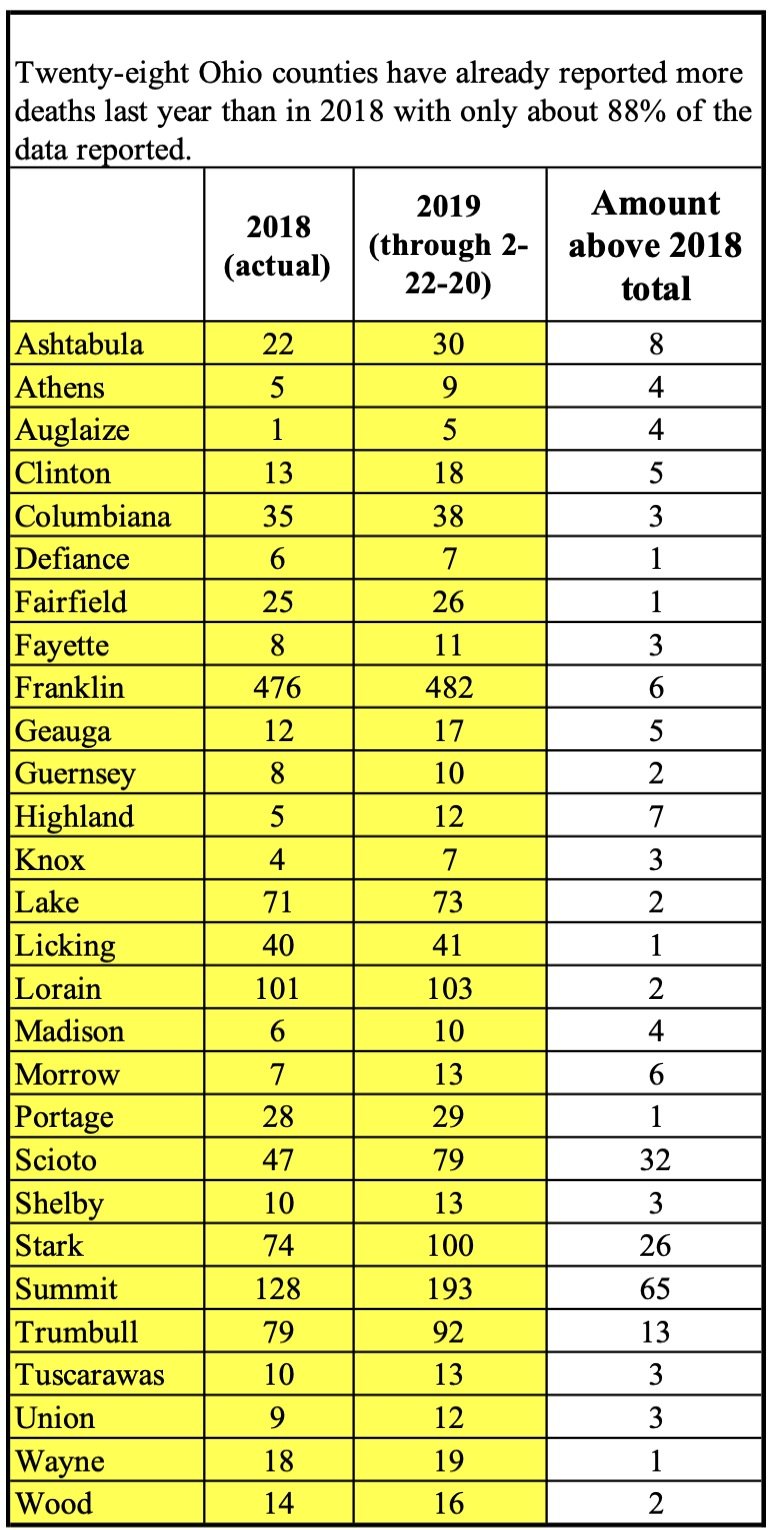 The same thing we should have learned from earlier years: Measuring the chemical composition of the illegal drug supply is the most important public health information that can be collected. Tell me what’s in the drug supply, and I’ll tell you how many people will die.

Few people realize that drug use in Ohio is average. Levels of use are not causing our extraordinarily high levels of overdose.

People are suffering accidental drug poisoning? The variation in drugs and the amount of drugs people are consuming are causing overdose deaths in Ohio and elsewhere. We need to measure both at the macro (epidemiological) and micro (individual) level what is in the drug killing so many people. “Drug checking” is the only way to significantly reduce overdose death, absent an ending of the drug war. It needs to be precise — identify the drug by name and quantity — and reported as close to immediately as possible.

Ohio does very little drug checking, especially at the local level. We need to care about what’s in drugs being consumed before the autopsy, not after.  Drugs have always been with us and always will be. We need to empower people who use drugs to stay safe, to stay alive.  Drug checking on a mass scale is the public health intervention that will end the epidemic.