SPECIAL REPORT: What people do when reversing an overdose with naloxone in Ohio

How many doses are use in overdose reversals?

Harm Reduction Ohio (HRO) today releases an in-depth look at overdose reversals with naloxone. The 14-page report was written by Linda Smolak, a retired Kenyon College psychology professor and a key HRO volunteer, and AmandaLynn Reese, our indefatigable outreach director, with the help of several other staffers.

Linda and AmandaLynn analyzed  two surveys on real-world experiences of Ohioans who have been reversed themselves by naloxone or used naloxone on others to reverse opioid overdoses. Taken together, the surveys provide an interesting glimpse into how naloxone is used in Ohio. 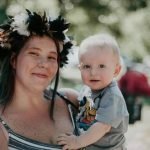 First, it is evident from both surveys that a large majority of people use naloxone in the correct circumstance, i.e., when they suspect an opioid overdose. Even when non-opioids are the primary drug, naloxone is sometimes used if people suspect the other drugs are cut with fentanyl.

A substantial majority of people in a survey by NextDistro, Harm Reduction Ohio’s partner in online naloxone shipments, knew the person they were trying to revive well and likely knew their drug preferences. This is likely also true in a survey done directly by HRO through social media and our network of lay naloxone distributors. 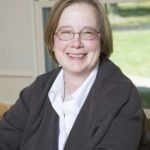 Both surveys make it clear that people administering naloxone prefer to use a nasal spray. Narcan is the one cited most frequently, but that may be an artifact of availability. Narcan is more commonly available than Kloxxado in Ohio. 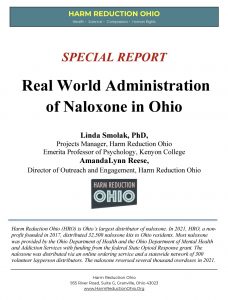 There is reason to expect that more people may prefer Kloxxado, which has a larger dose of naloxone than Narcan as they learn more about it. HRO’s lay naloxone distributors increasingly request Kloxxado. HRO’s current policy is to provide Kloxxado only when asked. Between March 1 and April 12, HRO sent 1,228 Narcan kits, 400 intramuscular (IM) kits and 84 Kloxxado kits to lay distributors. Between May 3 and June 15, the comparable numbers were 1,492 Narcan, 347 IM, and 360 Kloxxado. It would be premature to call the increase in Kloxxado a lasting trend, but it does show an increase in requests for Kloxxado.

It is clear that nasal delivery is the preferred way to use naloxone, whether for Narcan or Kloxxado Nonetheless, a substantial minority of people (nearly 40% in the NextDistro survey and almost 20% in the HRO survey) preferred IM. This suggests that the continued availability of both forms of naloxone is important.

In both surveys, most respondents reported following standard product recommendations by (a) using 1-2 doses of naloxone, (b) providing rescue breathing, and (c) calling emergency medical services. However, a worrisomely large minority do not provide rescue breathing. An even larger share of minorities (over 1⁄3 of respondents in each survey) do not call EMS, likely reflecting a fear of interacting with institutional and public services. If, as especially the HRO survey suggests, people find it harder to revive people (i.e., more naloxone needed than in the past), rescue breathing and calling EMS may be increasingly crucial in order to save lives.

How many doses are typically used to reverse an overdose? Two was the most common response in both surveys: