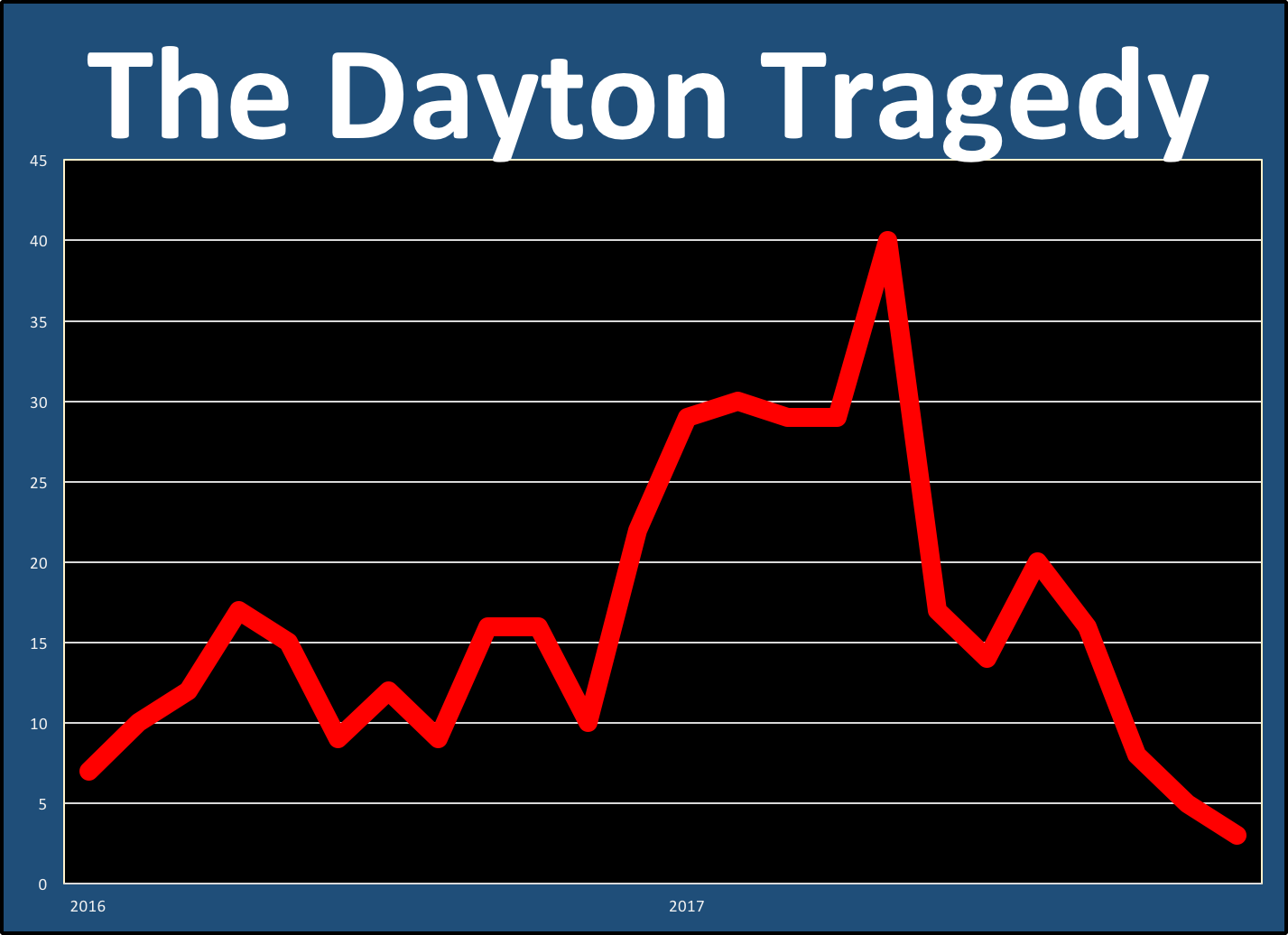 The Dayton area experienced a sharp increase in overdose deaths in late 2016 and early 2017 that attracted international attention. The death spike got a photo essay in The New Yorker. NBC News called it a “mass casualty event.”

Now, a year after the death spike that resulted in Dayton being labeled the “heroin capitol of the nation,” a Harm Reduction Ohio analysis indicates that heroin may not have driven the tragic loss of life at all. The killer appears to have been another opiate: carfentanil, which is estimated to be 5,000 times more powerful (for pain relief, by weight) than heroin.

The Dayton death spike confirms that fentanyl-related overdose deaths are taking the lives of many cocaine and meth users, not just heroin addicts. In fact, during the time Dayton’s heroin users attracted notoriety, only a fraction of overdose deaths in the area in 2017 — less than 10% — involved heroin at all, autopsies showed.

One reason for so few heroin-related deaths was that fentanyl and its analogs were sometimes the only thing in many “heroin ” mixtures. However, the same was often true of cocaine. What purported to be cocaine, often contained none of that drug, only fentanyl — and, in a deadly twist, for reasons unknown, carfentanil.

In 2017, carfentanil was found in about 10% of seized cocaine and 10% of seized heroin in the Dayton area. But those numbers are deceptive when it comes to overdose risk. Heroin users understand their drug mixture may contain fentanyl. Cocaine users do not. When heroin users got an adulterated drug, it was straight fentanyl 80% of the time. Not so for cocaine users. It was almost always carfentanil or nothing. 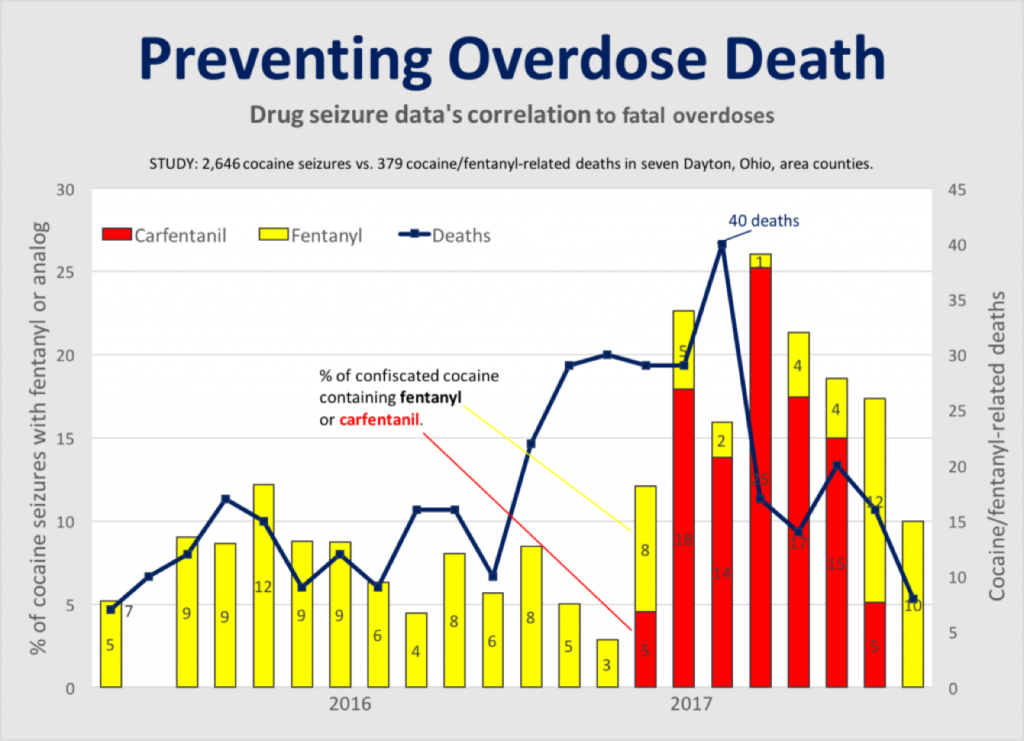 An examination of cocaine overdose deaths in the Dayton area’s death spike shows that carfentanil was likely the primary cause. The study offers support for the unproven “gut” belief that carfentanil kills at a magnitude far beyond that of fentanyl.

The chart shows a mountainous  increase in overdose death (the thick blue line). The frequency of carfentanil in the area’s cocaine supply is shown in red in the chart’s bars/columns.

(A detailed PubMed style summary of the study’s methods and results can be found here.)

For the study, Harm Reduction Ohio used drug seizure data from 2,656 drug mixtures confiscated by law enforcement over a 22-month period and analyzed by the Miami Valley Regional Crime Lab. The lab serves seven counties in the Dayton area. It also does toxicology tests on drug overdose fatalities.

The seizure data indicate that — for reasons unknown — carfentanil entered the Dayton area’s illegal drug supply in significant amounts in 2016-17 and killed large numbers of drug users. Then carfentnail largely went away. And deaths fell sharply in the second half of 2017.

Public health officials have been trying to figure out what caused the sudden, sharp decline in overdose deaths. The reason appears to be something that occurred outside of the scope of government: a sharp, sudden, unexplained decline in the presence of carfentanil.

Carfentanil’s role in the deaths of heroin users is somewhat muddied because fentanyl remained common in the “heroin” supply during the death spike — 80% fentanyl and just 10% carfentanil. Cocaine user deaths provide a cleaner look at carfentanil’s killing power. In the mortality of this population, carfentanil was the singular variable, the “C word” that connected overdose deaths among cocaine users.

This examination of carfentanil, cocaine and overdose deaths in the Dayton area offers three important lessons:

Opiates (and fentanyls) are not all the same. Government treats all opiates equally — equally illegal, equally bad and equally damaging to health. In fact, all opiates are different. Banning one opiate causes other smaller, more easily concealed opiates to become more common. Replacement opioids tend to be more potent by weight and more dangerous. Thus, the drug war has pushed drug users and sellers from opium to morphine, from morphine to heroin, from heroin to fentanyl, from fentanyl to carfentanil.

Fentanyl and its analogs are potent in such small amounts — measured in micrograms — that they require precise, professional dilution to be safe. Prohibition has driven illegal markets to use drugs that can never be used safely in black markets.

Drug dangers increase exponentially, not incrementally. Carfentanil doesn’t kill just a few more people than fentanyl. It kills at an entirely new level. Carfentanil is to fentanyl as fentanyl is to heroin. Each change to a more compact opioid pushes overdose deaths to a higher plateau — and one that is not easily reduced by traditional public health responses. Syringe exchange can reduce secondary illnesses, such as HIV and Hepatitis C, but does little to reduce overdose deaths, especially in cocaine users sniffing adulterated drug mixtures.

The actual chemical composition consumed is the primary driver of mortality rates, not addiction or what drug users believed they were using. The chemical composition of illegal drugs is driven by economics: the interplay between price-potency-compactness that drives suppliers, along with changes in consumer demand, materials availability and,competition from other drugs (legal and illegal).

Drug seizure data is a neglected public health data asset. Nationwide, more than 2.5 million samples of confiscated drugs are analyzed by labs every year. In Ohio, more than 100,000 analyses of illegal drugs are performed annually. Integrating this data into explanations of why people die from illegal drugs will  provide scientific and medical explanations for illegal drug users’ mortality, replacing the current moral explanation, i.e., the person shouldn’t have taken the drug.

The theory of the drug war is that arresting drug users and sellers is needed for the public health. If drug laws are for health reasons, confiscated drugs must be considered primarily a public health resource and only secondarily a law enforcement tool. In 2016, the United States suffered 64,000 overdose deaths — classified in Centers for Disease Control mortality data as “drug poisonings.” Yet, no public health effort is underway to measure or understand the chemical composition causing the deaths — i.e., poisoning — of tens of thousands of Americans.

The Harm Reduction Ohio study — using limited data on the chemical composition of the drug supply involved in a single death spike, involving 400 fatalities — shows the current path of scientific ignorance is a mistake. Beyond vague, often incorrect, generalities, modern medicine and science knows next to nothing about what’s causing the drug overdose epidemic. This ignorance and lack of curiosity cannot be justified during an ongoing “mass casualty event.” 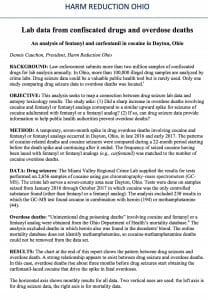