“Tell me what’s in the drug supply, and I’ll tell you how many people will die from overdoses.” 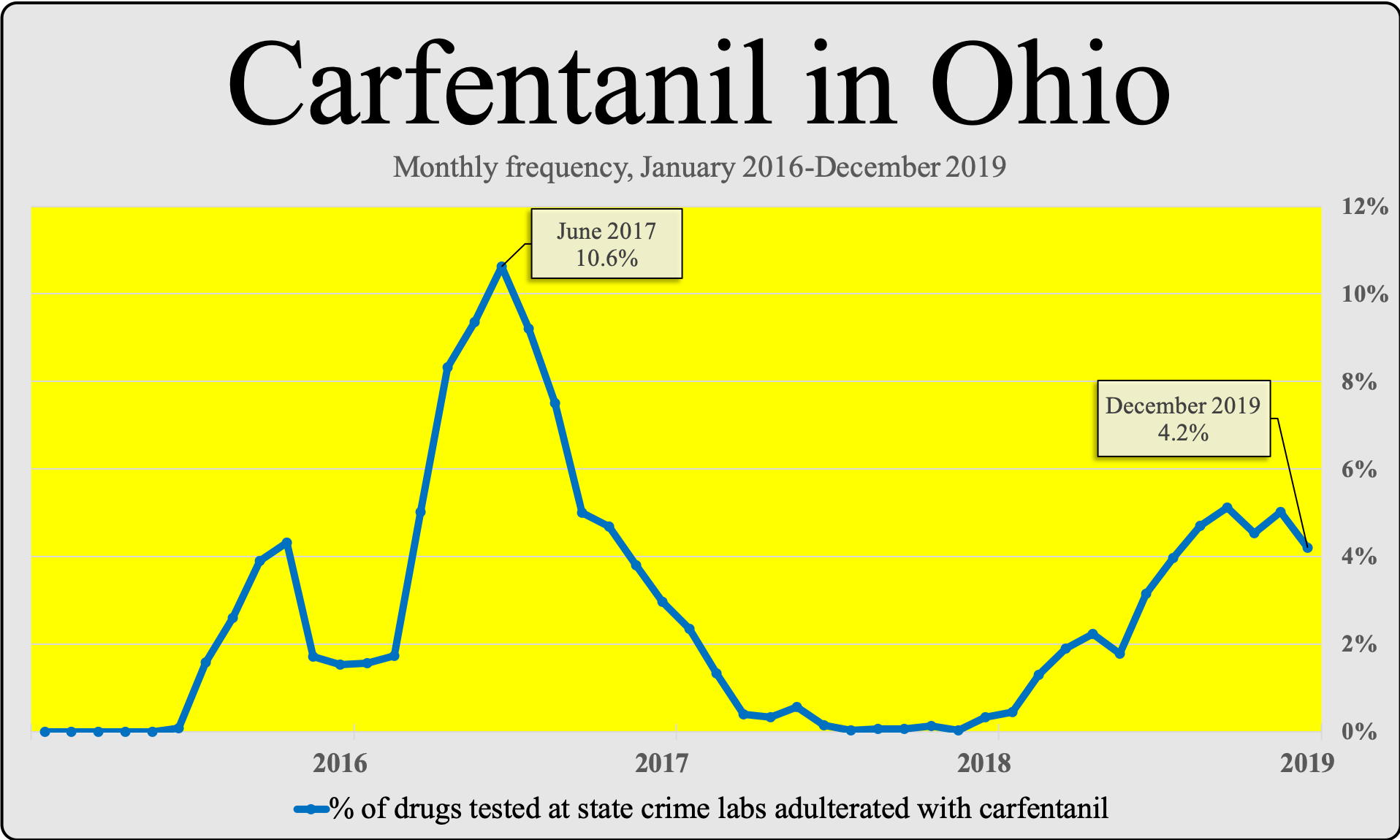 Drug checking is the only way to quickly, sharply reduce over deaths

The Story of Carfentanil in Ohio

As much as we wish it was otherwise, harm reduction efforts — such as naloxone distribution and medication-assisted-treatment — only limit overdose deaths in modest amounts. Overdose death is largely determined at the epidemiological level by the chemical composition of the illegal drug supply. “Tell me what’s in the drug supply and I’ll tell you how many people will die,” says Dennis Cauchon of Harm Reduction Ohio.

Ohio has made a big effort to determine what’s in a person’s blood system AFTER they are dead. Unfortunately, this is backwards thinking. Ohio should make a massive effort to determine the danger of drugs BEFORE they killed a person. Toxicology tests on the dead are history reports in a fast-changing overdose epidemic. By the time the coroner’s report is done three months after a death, the composition of the illegal drug supply has already changed, often significantly.

Look at Ohio’s carfentanil supply as an example. The drug came in fast and hard, soared from non-existent to being found in 10% of the drug supply in just a few months, and killed a couple thousand Ohioans — before public health authorities or law enforcement had a clue. Then it essentially vanished just as quickly — again, before public health authorities and law enforcement were aware of what was driving overdose death in Ohio up and down — and now up again.

The overwhelming importance of analyzing the chemical composition of the illegal drug supply has been shown in two recent scientific articles using state crime lab data supplied to Harm Reduction Ohio by the Ohio Bureau of Criminal Investigations. The first article was a research letter published by the Journal of the American Medical Association. The second was a longer, detailed article in the March issue (already out) of medical journal Drug and Alcohol Dependence.

What does all this mean?

Drug checking is, by far, the most important tool available to reduce overdose death. It needs to be done at the epidemiological level, as HRO and these scientific articles do. The lack of drug checking to know, for example, the portion of cocaine that has fentanyl (or carfentanil) in it is similar to not knowing what percent of auto fatalities are related to alcohol. If you fail to measure most important variable (alcohol) in fatal crashes, you can’t accurately assess the role of smaller variables, such as seat belts or better headlights.

Ohio crime labs test about 100,000 samples of seized drugs every year. This information should be published online immediately. If carfentanil is in Zanesville, people who use drugs need to know. Their lives are at stake.

Drug checking needs to be widespread on the individual level, too. A person should have the ability to accurately test substances they possess — whether legal or not — as a safety tool. Knowledge is power. Drug overdoses are accidental mis-estimates of drug potency. People who use drugs should be able to accurately measure what they may consume and to adjust or forgo the dose based on factual information. Knowledge is power, and, in this case, the power to preserve life and prevent death.

How to do drug checking

Fentanyl test strips are a start. The strips give a yes/no answer to the question of whether any amount, event trace amounts, of fentanyl and its analogs, are in a substance. These tests are especially valuable for people who use cocaine, meth or pills. But far more accurate GC-MS and LC-MS machines exist and should be deployed throughout on Ohio, at fixed locations and mobile vans. The price of portable machines has been falling. A new top-notch portable machine can be bought for $50,000. Use machines for even less. And the truth, all you really need is the inexpensive GC part of a $200,000 GC-MS machine to be accurate in estimating what the drug is and how much is there in 99.9% of cases. A GC machine can be bought for $25,000 and much less if it’s used.

However, precise drug checking by private citizens is banned by current law. Law enforcement policies are the primary roadblock to letting people who use drugs live. Some harm reduction groups are doing this drug checking in friendly jurisdictions, such as Chicago. No scientific drug checking is done in Ohio as a public health measure. (The state’s dozen crime labs do these tests with outstanding accuracy about 100,000 times a year — and this data is what can be used now for epidemiological reporting of the drug supply, as mentioned above.) The same technology and legal authority belongs in the hands of private organizations and private citizens.

The chemical composition of a drug is a scientific fact, nothing more than information. Today, it is used only to arrest and imprison people who use drugs. It should also be used to save the lives of these fine people.