How hard is it to test for the amount of drugs in a mixture?

Ohio should base sentences on the weight of drugs, not filler needed to make it safer. This is especially true of small dose drugs, such as fentanyl and LSD, which can make up less than 1% of the mixture that is seized. Ohio senators considering S.B. 1 to harshen fentanyl penalties asked how hard measuring drugs would  be. Here’s the answer.

Q. How difficult and costly is it to determine a drug’s weight?

A. Not hard, not expensive. The same gas chromatography test now used to establish drug identity can report weight. No additional equipment is needed. Minimal time or expense is needed to compute weight. Drug weights are not now reported because the state does not ask its instruments to produce the number.

The state’s more expensive[2] GC-MS machines add mass spectrometry analysis after the GC test. However, the MS test is not involved in the weight calculation. The MS test provides the molecular weight of each substance in a sample, providing precise confirmation of drug identity. Notwithstanding the words mass spectrometry and molecular weight, the analysis is not used to calculate drug weight or a sample’s purity.

Cost. The state could determine drug weights at modest time and expense using existing staff and equipment. Every BCI forensic scientist has a GC instrument at their lab bench. A testing procedural change would be required to calculate weight and is explained in detailed below.

Alternatively, the state could contract out the task of identifying a drug type and weight at a modest cost, perhaps less expensively than having state staff conduct drug tests. The cost of contracting would likely be $100 to $300 per test, depending on the volume of tests in the contract. For example, The Ohio State University Chemical Instrument Center’s published rates for a GC-MS test are: [4]

Procedural change required.[5] To determine drug weight or drug type, a forensic scientist must “normalize” his or her GC instrument like a scale — to see how the specific GC instrument records specific substances.  For example, the Relative Retention Time (used to determine drug type) may be 9.03 minutes for fentanyl.[6] To determine the exact retention time on a particular GC instrument, the tester must run a “reference sample” of known fentanyl through his or her instrument. The analysis is adjusted to reflect whether that specific instrument recorded fentanyl 9.03, 9.06 or another number.  It’s similar to establishing the exact length of the track before a 100-meter dash.

What is not known prior to analysis is what proportion of the seized sample is the substance of interest. Submitting the unknown and standard reference samples to the same GC analysis lets you figure out the concentration of fentanyl in the unknown (Step 3, 0.12 milligrams per milliliter). Reference samples are simply fentanyl at different concentrations; preparation of these solutions is a standard laboratory technique.

To connect the data from the GC to the content of the original seized sample, you take into account the volume of the sample that was prepared for GC analysis (Step 4a, 10 milliliters of sample). Multiply concentration (0.12 milligrams per milliliter) by amount (10 milliliters). This amount of fentanyl (1.2 milligrams) was present in 1 gram of the seized substance (Step 4b) and so the entire seized sample of 100 grams contains 120 mg fentanyl (Step 4c). 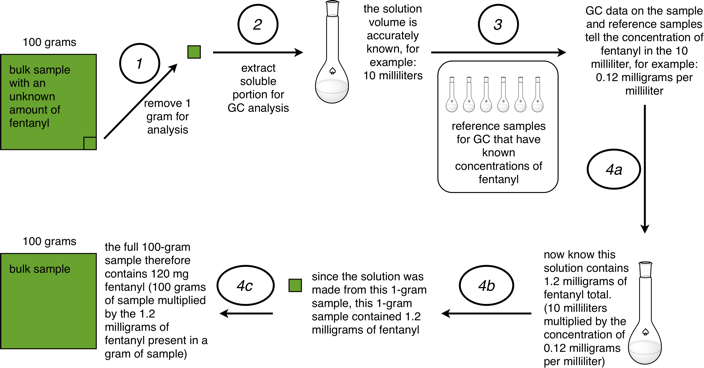 None of this is particularly complex or time-consuming. It’s routine standardization used every day in science, engineering, medicine and cooking. The same reference samples can be used for weeks or months. They are not made for every test.

If true that the BCI lab is not accredited to GC weight analysis, this would be a major failing considering the Attorney General says his #1 budget priority is to “Ensure the BCI is the leading criminal investigation and analysis agency in the country.”[8] Elsewhere, the Attorney General claims that BCI is accredited at the highest level: “The standards CALEA sets represent the highest professional business criteria related to the administration, operation, and personnel practices of law enforcement.”[9] The failure of BCI to be accredited for weight analysis should be corrected as soon as possible, if true.

Conclusion. The state can test for fentanyl weight at a modest expense. Failing to do so creates a perverse legal system that incentivizes fentanyl at its most dangerous, thereby promoting overdose deaths.

Fentanyl is a drug so small that a dramatic inverse relationship exists between the drug’s danger and the total weight of the mixture it’s placed in. The safest fentanyl is diluted to less than 1 part fentanyl to 1,000+ parts other things.[10] Making dilutants the basis of the crime will contribute to overdose deaths and a perverse sentencing scheme.

[3] The advantage of a GC-MS instrument is that, by using molecular weight, it can identify substances even when it’s not looking for them. By contrast, a GC test can accurately determine the existence (and total weight) of a substance if it is told to look for it. A GC test can be programmed to look for dozens of substances – heroin, fentanyl, cocaine, etc. – at the same time and during the test, but GC analysis would not identify a substance – a designer drug, for example – that it had not been asked to consider. By contrast, an MS analysis records the molecular weight of each substance in a mixture and can match this number to massive databases containing records for over 200,000 molecules.

[5] Skip this section if technical details are of little interest. It was written with the assistance of two Ph.D. chemists.