WARNING: Carfentanil is back in Ohio…and killing again

WARNING: Carfentanil is back in Ohio’s drug supply. Preliminary drug seizure data from the state crime labs show the ultra-potent and often deadly drug appears to have re-emerged in the Dayton area in the last three months of 2018 and moved this year to the northeastern part of Ohio, most heavily in Summit County (Akron). Carfentanil’s presence has been confirmed by the state crime labs as far east as Ashtabula County and as far west as Sandusky County.

Why does this matter?

Carfentanil is the most dangerous fentanyl analog. It was responsible for more than 1,500 overdose deaths in Ohio from mid-2016 through 2018, far more than in any other state. (Harm Reduction Ohio first reported last summer that carfentanil was the primary cause of Ohio’s overdose surge.) 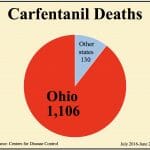 Carfentanil came fast and hard into Ohio’s drug supply in mid-2016 and was responsible for nearly the entire overdose death spike that occurred in Ohio from July 2016 though July 2017.

Overdose deaths in Ohio began falling in the second half of 2017, causing local officials to take credit for the drop. In fact, the decline was driven almost entirely by a decline in carfentanil in Ohio’s illegal drug supply. By the summer and fall of 2018, carfentanil had essentially vanished from Ohio’s drug supply.

Carfentanil’s vanishing act was swift. In June 2017, carfentanil was found in 9.8% of ALL Ohio illegal drugs, excluding marijuana. In May 2017, 8.4% of cocaine tested in the crime labs had carfentanil in it — not just fentanyl but deadly carfentanil which can kill a non-opioid tolerant cocaine user quickly. 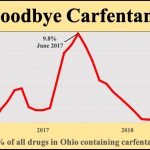 Then, carfentanil’s presence plummeted. By early fall of 2018, the drug was essentially gone from Ohio’s drug supply. “Goodbye carfentanil,” wrote Harm Reduction Ohio on our web site. We should have said good riddance.

Today, carfentanil appears to be back, for reasons unknown. Its presence is nowhere near the level it was in 2016-2017, but its return has coincided with an upsurge in overdose deaths and an end to a trend of falling overdose deaths that had lasted more than a year. Early (and incomplete) mortality data indicate that significant increases in overdose death may have started in December 2018. (See our April 15 post.) 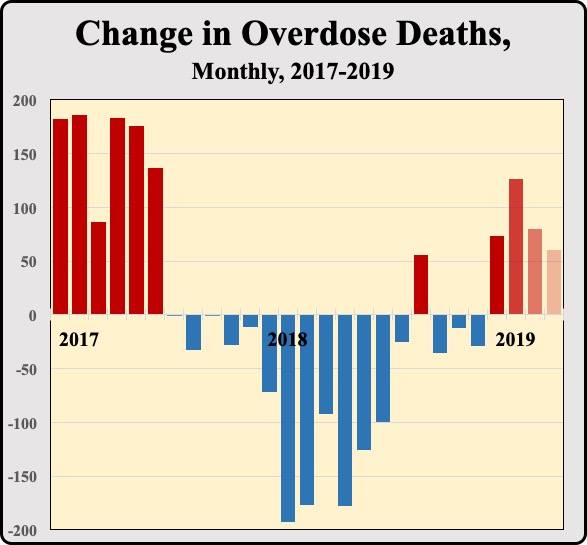 Harm Reduction Ohio gets all lab test results from the state Bureau of Criminal Investigations four crime labs every quarter, or about 60,000 GC-MS lab tests per year on illegal drugs seized by police across Ohio. It is the largest cache of scientific information on the contents of the illegal drug supply that caused 4,854 overdose deaths in 2017 and about 4,000 in 2018. (About 1.8 million Ohio adults use illegal drugs every year, according to the federal drug use survey.)

BCI supplied the most recent quarter of lab tests on seized drugs today. Some fields were missing, so a precise analysis can’t be made until the crime labs send complete data. However, the carfentanil trend was clear: It’s back in at least part of the state. For the entire state, carfentanil was found in about 1% of drugs confiscated in Ohio in February. Of the drug confiscated in the northeastern fourth of the state, the share was about 3%. (By contrast, xlyazine, the horse tranquilizer that has gathered considerable media attention recently, was not found in any of the illegal drugs tested by BCI in the first two months of 2019.)

The future of carfentanil is impossible to predict. Consider this Facebook Post a warning, not a prediction. Drug seizure data tends to pick up changes in the drug supply two or three months after they appear in the mortality data. In other words, people start dying before what’s killing them shows up in drugs police confiscate.

Bottom line: Overdose deaths are rising again in Ohio, perhaps temporarily, perhaps not. Why? Nobody knows. Is carfentanil the cause? Yes, but it’s unclear if its role is major or minor. What is clear is this: Be careful out there. You’re living in the epicenter of the synthetic drug response to drug prohibition. — Dennis Cauchon, President, Harm Reduction Ohio