The Road to Hell: What caused Ohio’s overdose epidemic?

Another record year for overdose deaths 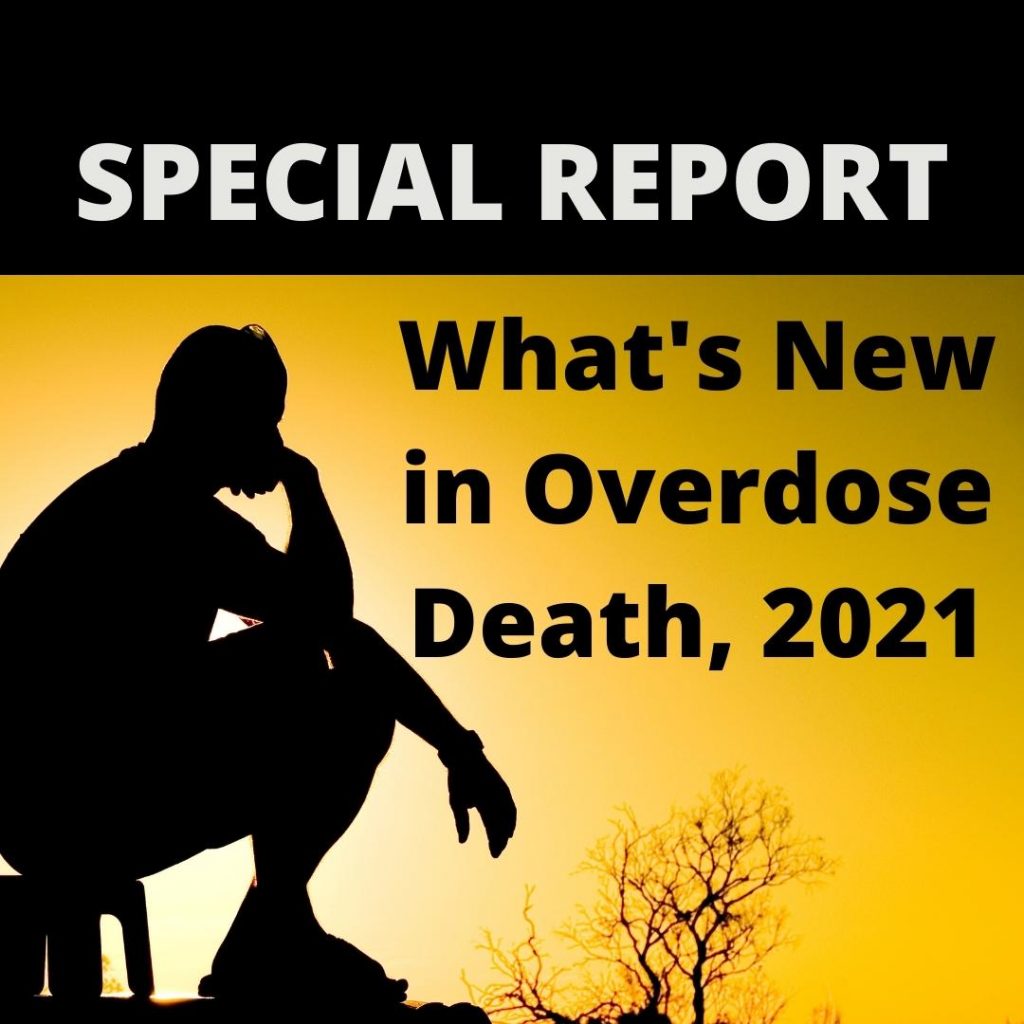 Harm Reduction Ohio estimates that Ohio’s overdose death count will reach 5,100 to 5,250 in 2021, a record for our state and an increase of about 3% over last year’s death toll.

The dramatic shift toward fentanyl-related stimulant deaths has fundamentally altered the demographics and geographic epicenter of overdose death in Ohio.

This article will explain Ohio’s overdose epidemic in detail and in a way you may not have heard before.  The overdose epidemic is a human-made tragedy, now more than a decade old, that has had four distinct periods. Stimulant-related overdose deaths define the latest period.

For this analysis, Harm Reduction Ohio used overdose deaths recorded through November 17 in the Ohio Department of Health mortality database, as well as Ohio-specific historical data on drug adulteration and prescription opioid deaths. About two-thirds of overdose deaths for 2021 have been recorded in the state’s mortality database, making reliable, albeit imperfect, full-year projections possible for 2021.

The results are not pretty.

Ohio’s overdose epidemic shows no sign of slowing. Instead, death is expanding into new populations.

Overdose deaths are on track to increase about 3% in 2021 versus 2020, which itself was a record year for overdose deaths in Ohio. 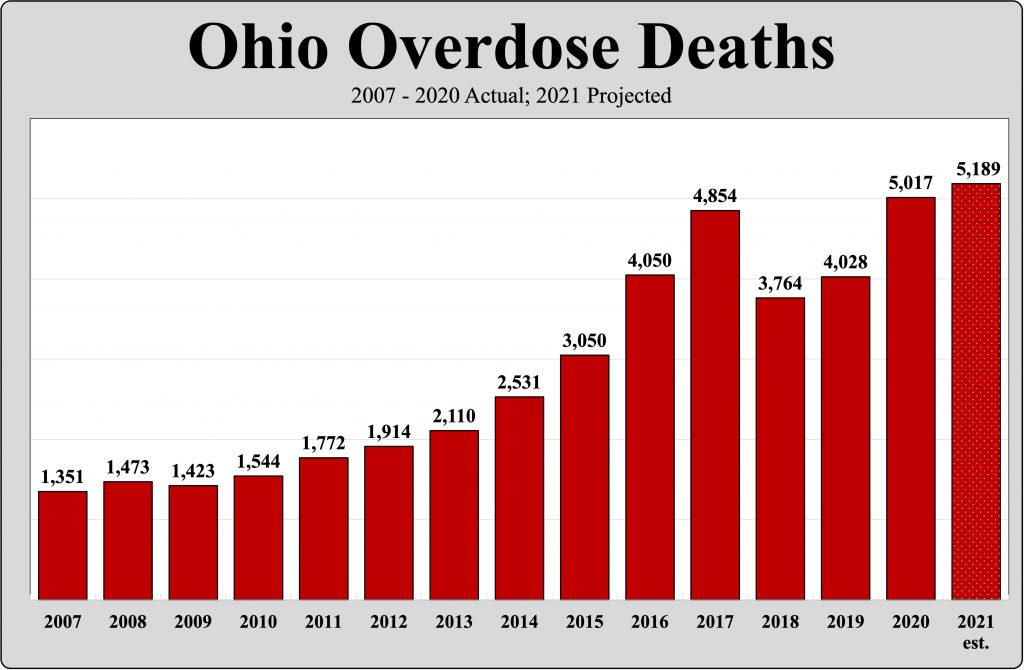 In 2020, 5,017 Ohio residents died of accidental drug overdoses. This record level of overdose death was driven by fentanyl accounting for an unprecedented share of Ohio’s drug supply. This change was caused by the pandemic restricting the importation of heroin and cocaine from Mexico. These bulky drugs were replaced by compact, easy-to-hide, easy-to-make, easy-to-smuggle fentanyl and its analogs.

If  overdose deaths continue at the pace reported through November 17, Ohio’s overdose death count would total 5,189 this year. To account for historical variation in weekly and monthly overdose deaths, Harm Reduction Ohio projects the full-year overdose death toll of Ohio residents will range from 5,100 to 5,250 in 2021. By comparison, about 1,300 will die in vehicular accidents in Ohio this year.

The same overdose death toll is shown here as a rate per 100,000 Ohio residents. You can see that overdose death has increased nearly 400% since 2007, when the Ohio Department of Health’s data series begins and from the prescription opioid period. 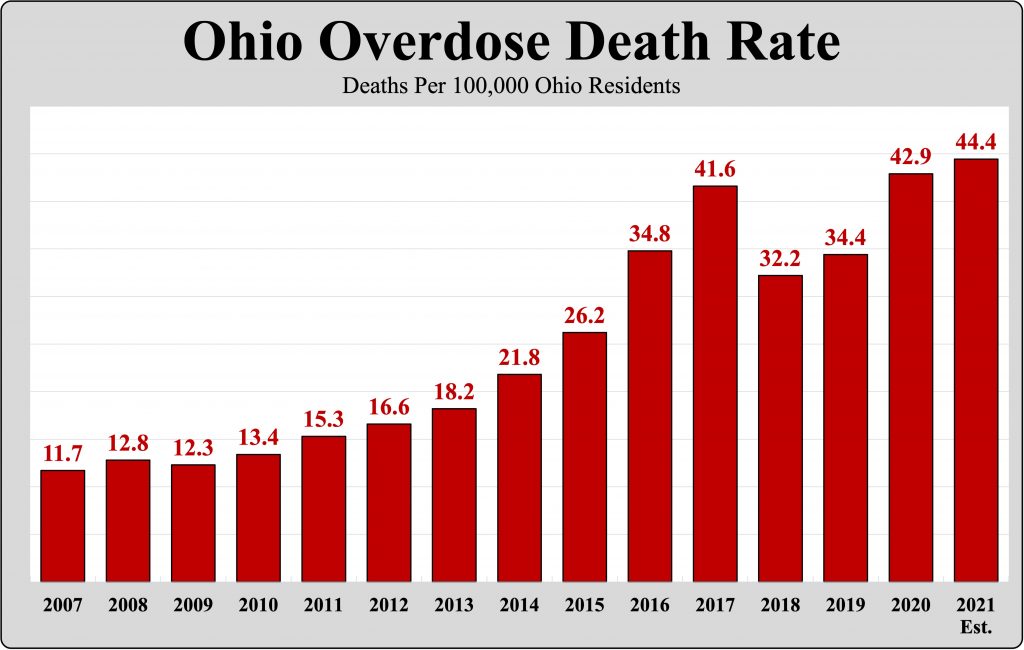 This chart helps readers understand the level of overdose death that occurred during the peak of the prescription opioid era in the late 2000s.

What caused the overdose epidemic?

In retrospect, prescription opioid overdoses were a small problem compared to what followed the state’s decision to limit access to legal and unadulterated opioids. Overdose deaths increased by several hundred per year during the 15-year period of relaxed opioid prescribing that ran from roughly 1995 (when Oxycontin was introduced) to 2011 (when Ohio started imposing severe restrictions on access to prescription opioids).

As those restrictions were implemented and expanded, overdose deaths in Ohio soared by many thousands. A clear relationship exists between expanded opioid prescribing in Ohio and an increased overdose deaths. However, the effect was incremental and small compared to what followed when the state cracked down. The correlation between restrictions of opioid prescriptions and increases in overdose death is stunningly clear, consistent and large.

A hard question must be asked: Did the government’s crack down on prescription opioids cause an increase in overdose deaths? In other words, did a policy intended to reduce overdose death actually do the opposite?

Let’s look at the evidence. 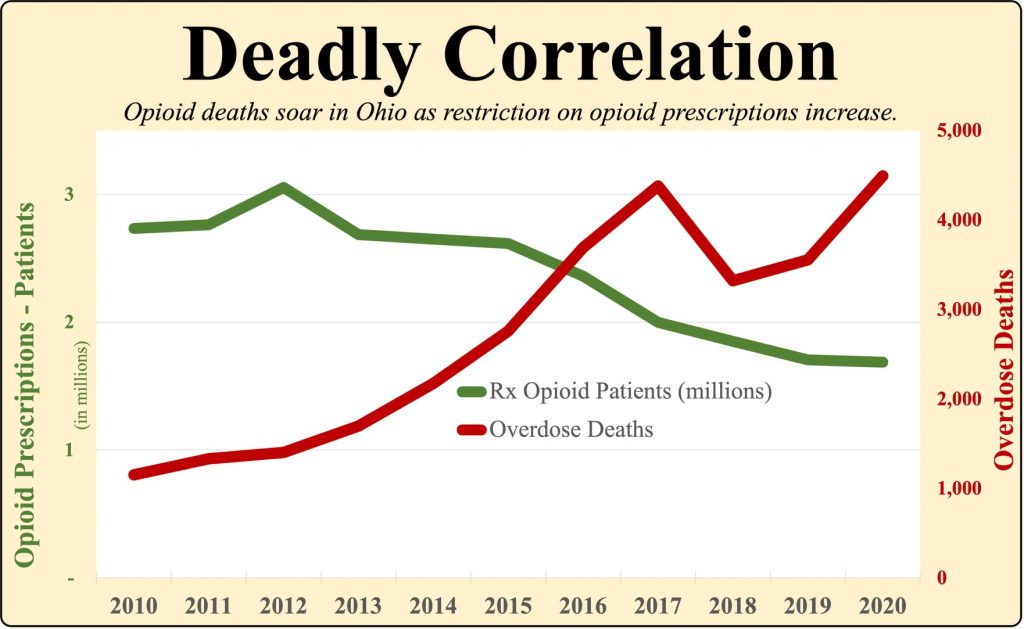 The trends look the same results even when you use slightly different variables. For example, tracking the number of opioids prescribed (rather than patients receiving opioids) and opioid-related overdose deaths (rather than all overdose deaths) shows the same breathtakingly clear pattern.

Have you considered that restrictions of legal opioid prescribing may be the primary cause of the massive overdose epidemic now causing 5,000 accidental overdose deaths in Ohio every year? You should because that is what happened.

The overdose epidemic may be the biggest public health error in our country’s history.

Why might restricting opioid prescriptions lead to a catastrophic increase in overdose death? The answer can be found in basic economics.

Even if the total number of opioid consumers declined, as some evidence shows happened, the safety benefit of reduced consumption must be weighed against the increase in danger and deadliness that occurs when knowledge of purity, potency, dosage and the actual drug consumed is removed from the act of opioid consumption.

We now know that the small decrease in opioid consumption that may have occurred was more than offset by the increased danger of opioids being consumed. In fact, any benefit that may have occurred from reduced consumption of unadulterated opioids was overwhelmed by the increased danger from adulterated opioids and the shift to compact, potent synthetic opioids. The net effect of these regulations was to increase danger and death from opioid consumption — and later other drugs — by an amount unimaginable when the regulations were put in place.

Opioids, including fentanyl, are relatively safe drugs when taken as in known amounts. However, opioids, especially fentanyl, can cause fatal respiratory depression (stopped breathing) when ingested in unexpected large doses. Fentanyl and its analogs — especially carfentanil — must be measured with great accuracy because they work at the microgram level. A small dosing error can have big consequences.

Ohio did the opposite of what good public health policy does. It shifted hundreds of thousands of Ohioans away from legal drugs that carry some risk and pushed them into a illegal markets for drugs that carry enormous risk.

The road to hell paved

To be blunt: Ohio’s overdose epidemic was caused by a gross miscalculation of the risk of unintended consequences from a well-intended regulation. The policy was implemented without consideration of how markets operate and consumers and suppliers adjust to market dislocations caused by new regulations. Regulators failed to consider how the drug market would adjust to changes in rules and regulations, how supply and demand and price and quantity and incentives and disincentives, work in the real world.

At its core, our overdose epidemic is an economic phenomenon with public health consequences, not the other way around. A regulatory mistake has killed t 20,000+ Ohio residents by increasing the use of adulterated drugs and compact, potent, easy-to-hide synthetic drugs.

The state may have wanted to prevent overdose deaths, but it did the opposite because it failed to net the regulations’ potential positive effects against potential negative effects. Even today, with thousands of additional deaths that coincided with the policy change, you hear no public discussion from Ohio’s political or medical establishment about how a well-intended policy may have catastrophic unintended consequences..

The success of policies is not measured by what we hoped would happen. Health policies are judged by what actually happened. In Ohio, overdose deaths increased by thousands following the implementation of a policy meant to reduce overdose deaths by several hundred. Whether intended or not, the results are clear and unambiguous: as the prescription opioid crackdown was implemented and escalated, more and more people died from opioid overdoses.

Did the prescription opioid crackdown cause the overdose epidemic as we know it today? Correlation is not causation — except sometimes it is.