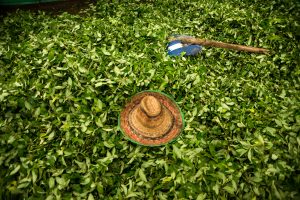 Why is synthetic fentanyl and carfentanil being added to the coca plant?

A few months ago, I checked the most popular Google search term leading people to our web site. It was a question: “How much fentanyl will kill you?”

I got choked up when I saw that. People from all over the world, not just Ohio, were coming to Harm Reduction Ohio for an answer to a basic health question that health authorities failed to answer. “How much fentanyl will kill you?” is perhaps the most important health question an illegal drug user — 1.8 million people use illegal drugs every year in Ohio — can ask, next to “how much, if any, fentanyl is in this drug?” 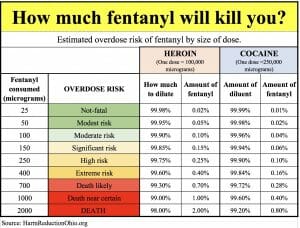 For users with little or no opioid tolerance.

I relocated the chart to a permanent position on our home page as well. Even today, nearly a year after publication, “how much fentanyl will kill you?” is our second most-read article, accounting for 8% of page views so far in August.

I rarely check our web site traffic. This is a mistake. When I looked last night, I was shocked to find out our most-read story was by far “Cocaine in Ohio: Be afraid. Be very afraid.”

We published this story a month ago, on July 18th, as part of our ongoing coverage of how overdose deaths are killing massive numbers of cocaine and meth users. 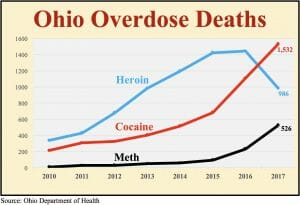 Stop calling this an opioid crisis or a heroin problem.

I hadn’t thought much about this story since it’s publication, but readers are telling me I was wrong. I should have known that from the beginning. Readers, especially readers who use drugs, crave accurate, meaningful information.

The cocaine story’s headline should have been: How much cocaine has fentanyl or carfentanil in it (and can kill you)?

For readers who use drugs, this is essential information — “news use can use,” as it’s called in newsrooms — and can be the difference between life and death.

The enormous reader response to this article shatters the false stereotype that your typical drug user is a losers bent on self-destruction. The truth is “typical” drug users — for heroin, cocaine, meth, marijuana and Tylenol — care deeply about their health. They deserve accurate information on what’s in the drug supply just as McDonald’s customers deserve accurate information on the fat and calorie content in a Big Mac and french fries.

Do health authorities supply users this essential, potentially life-of-death information? The answer is “no” — not even during a epidemic of “unintentional drug poisonings” that killed more than 72,000 Americans last year. To say that the drug war and the overdose epidemic is built on a foundation of ignorance is not an overstatement.

Since “Cocaine in Ohio: Be afraid. Be very afraid.” was published one month ago, it’s been read by more than 18,300 people from — 62% of our web traffic in that period. Since August 1, it’s been read by more than 10,000 people, or 58% of of our readership. (See chart.) And between the time I wrote the first sentence of this article and this sentence, more than 50 people have read the story. 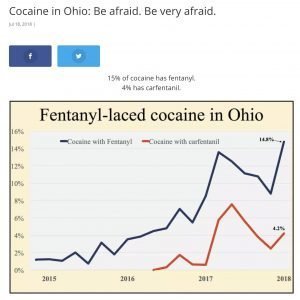 Traffic is accelerating daily as the story gets shared on social media. So far, it’s been shared more than 18,000 times on Facebook. That’s roughly the same as the number of people who’ve read the story. The reason is that many people share stories without actually reading them. This story had a good chart and Facebook summary which made it possible to know what people need to know in an instant.

Harm Reduction Ohio shared the story just once. That was a mistake. Our Facebook share got 2,300 views (in addition to those on our web site) and was shared 13 times. But we failed to realize what information was needed by people who use drugs and in the marketplace of ideas.

I think readers are telling us we should prioritize creating some potentially controversial (but desperately needed) content. We’ve discussed producing a videos explaining (to smugglers, dealers, users, police, etc.) how to cut (dilute) fentanyl properly. Fentanyl can never be cut safely in powder form. It must be diluted in a liquid using a piece of common chemistry equipment called a rotary evaporator. The introduction of proper dilution techniques and greater dilution could reduce overdoses by huge amounts. Overdoses are mistakes by sellers and buyers, a market inefficiency that is almost non-existent in legal drug markets and can be reduced in illegal ones.

(Carfentanil can never be diluted properly by amateurs and should never be used in illegal drug markets.) 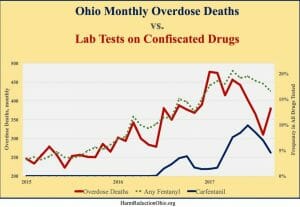 I underestimated reader demand for the cocaine-fentanyl story because it was just part of our ongoing coverage of how fentanyl and carfentanil spread into Ohio’s cocaine (and meth) supply, killing large numbers of Ohioans. Today, cocaine-fentanyl kills far more people than heroin-fentanyl. Meth-fentanyl deaths are soaring, too, and may someday surpass heroin-fentanyl.

The chemical composition of the drug supply — not use — determines overdose death levels.

Harm Reduction Ohio has been hammering away at this crucial fact because Ohio’s “opioid crisis” myth has focused on blaming opioid use and users for deaths. This is false. Use is not driving overdose deaths. We’ve always had heroin users. What’s changed is the rate at which all drug users are dying. Drug dependence can cause problems, but it shouldn’t kill you. Drug overdose death is a function of how  contaminated and dangerous the illegal drug supply is. Ohio’s “addiction crisis” is that bad policy is killing “addicts” and non-addicts alike.

The consequences of this conceptual and policy error is profound. Is anyone talking about getting Narcan into cocaine-using communities? That’s where most deaths — and disproportionately African American deaths — are occurring. (See “Is race playing a role in Ohio’s slow response to cocaine-fentanyl overdose deaths?”)

….that grabbed readers attention is this one.

The story shows what people interested in drug overdose deaths should care about: What percentage of the cocaine is mixed with fentanyl and carfentanil? Especially carfentanil, which, by itself, caused a surge that pushed Ohio to record overdose deaths in both 2016 and 2017.

Government public health officials have shown zero interest in what share of cocaine, meth or even heroin contained fentanyl or carfentanil — even though they have the data. I had to get the raw data from the state crime labs and analyze it myself in a coffee shop to find out this life-and-death information, so incurious were Ohio’s state and local governments.

The people who were smart enough to know what was causing overdose deaths — and how to reduce the chances of dying– were those looked down upon by the credentialed elite: drug users themselves! Drug users, blessed with an understanding of the obvious, are flowing to epidemiological data by which they can usefully evaluate relative mortality risks so as not to become unintentional drug poisoning decedents classified as T40.5 in the ICD-10 coding system.

In simple terms, this is “drug checking.” At a rave, DanceSafe may test a person’s specific drug. I call that micro drug checking. When you analyze 100,000+ drug samples for purity, that’s macro drug checking — or getting a broad assessment of danger in the drug marketplace.

If government was serious about saving lives (even while keeping drug prohibition), it would move to widespread and easy drug checking at both the micro and macro level.

“What’s in the drug?” is the only information that can make a significant contribution to saving lives. I believe government is reluctant to look at the polluted drug supply that killed more than 70,000 Americans in 2017 because it would lead to the next question: What caused the contaminated drug supply?

The truth is, we know why the government is reluctant. During the period in which we do not address the cause of overdose deaths, we owe it to drug users to give them as good a chance at safety as possible. Information on the contents of the drug supply should be made available to as broad an audience as possible, as fast as possible.

Where are readers from?

Ohioans made up about 54% of the readers who’ve read the cocaine-fentanyl story since it was published. Michigan ranked second at 10%, followed by Pennsylvania, New York and Illinois. A few hundred readers came from across the globe.

The cocaine-fentanyl story was most often read from 8-10 p.m. It was most popular on Tuesdays and Wednesdays.

Google analytics does not provide a breakdown for age or gender.