A revolution in naloxone distribution awaits

The price of naloxone continues to fall dramatically as generics and other competitors to Narcan nasal spray come on the market.

The state pharmacy has negotiated a price of $40.21 per kit for a new generic naloxone nasal spray, equivalent to Narcan. To compete, Narcan recently dropped its price to $47.50 per kit. For comparison: A year ago, a two-dose kit of Narcan cost $75 for governments and non-profits (such as Harm Reduction Ohio). 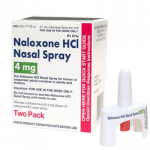 A second generic naloxone nasal spray is already on the market and a third may be on its way in a few months. The result is severe price pressure for a drug that has been overpriced for far too long.

To compete and retain premium prices, pharmaceutical companies are introducing higher doses than 4mg Narcan. Kloxxado, an 8mg nasal spray (which is manufactured in Ohio), has cut into Narcan’s market share since being introduced last year. Since August of 2021, the state pharmacy has shipped 37,126 Kloxxado kits. That’s a fraction of the 187,029 of Narcan kits delivered by the state pharmacy. Still, it’s a big change from the near monopoly Narcan had enjoyed.

Kloxxado currently charges the state pharmacy $60 per kit, a price that Narcan matched awhile ago before the generic naloxone nasal spray drove prices down even further. The real price action is in generic naloxone  nasal spray– and this is likely to be true for a long time. 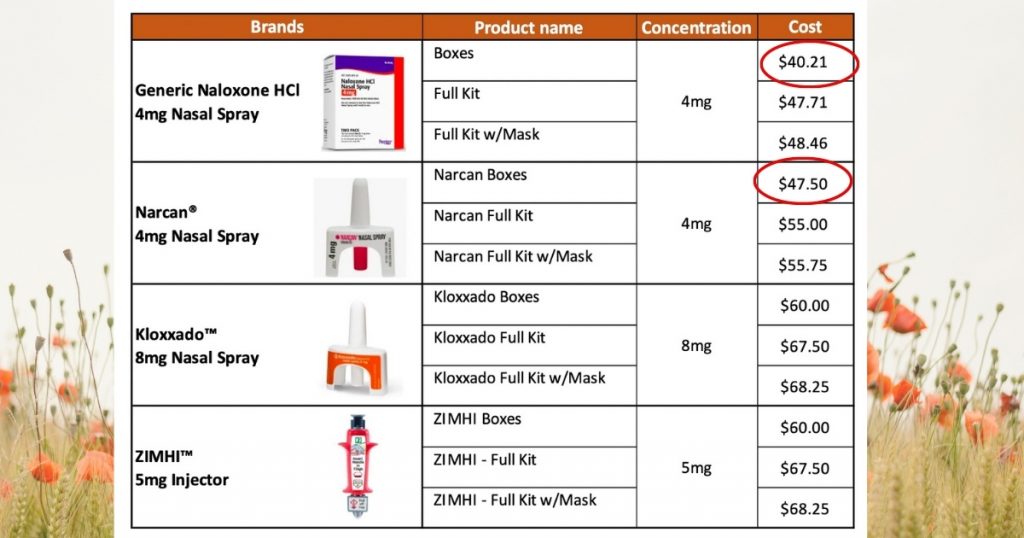 The two most important product prices are circled in the chart.

Expect the $40 per kit price to fall even more in the coming months and years. This price drops will pressure industry and the government to make naloxone an over-the-counter drug. Making naloxone over-the counter (no prescription needed) is an obvious reform that should have happened long ago. It has been blocked because of the pharmaceutical industry’s desire to protect profits made from high-priced naloxone. When drugs go over-the-counter — whether it’s Claritin or Prilosec or Narcan — prices fall dramatically because consumers, rather than insurers (and governments), are paying the bill.

Harm Reduction Ohio is our state’s largest naloxone distributor (31,500 kits in 2021).  We have not yet bought generic naloxone because it had not been available to us previously. But we will now! We’ll likely make generic naloxone the heart of our distribution effort. We encourage other distributors and Project DAWN programs to follow.

The supply of generic naloxone nasal spray may be a little tight at first. It can take time for a manufacturer to ramp up volume. But that problem won’t last.

A new era in naloxone distribution

The introduction of generics and the resultant price cutting will fundamentally change the financial model of naloxone distribution nationwide. In Ohio, it will free up millions of dollars that had gone to pay for kits and now can be used to support getting kits where they’re needed and to people at highest risk. Reaching people who use drugs is difficult work.

Overall, Ohio has done an excellent job of making naloxone available, especially when compared to other states. The Ohio Department of Health’s Project DAWN program (Deaths Avoided With Naloxone) may be the best naloxone distribution program in the country. But Ohio’s naloxone distribution spending has been distorted by the crazy-high cost of naloxone. We spend a fortune on product but not much on getting the product into the noses of people who are dying.

The next era should be dedicated to reaching people who use drugs (i.e., the people who are dying) and live in the shadows, stigmatized and criminalized. This will require time-consuming, persistent, localized efforts that include earning trust, creating better systems of distribution, more deeply involving people in active drug use and much more.

Harm Reduction Ohio already does this the best we can (and better than anyone else in Ohio outside of syringe service programs). We have an amazing network of 300 volunteer lay distributors across Ohio. They are the heart of one of the greatest mass naloxone distribution efforts ever, anywhere.

It would be even better if this network didn’t have to do everything in volunteers’ spare time, on their own dime and by their own initiative. Money spent organizing the effort, rewarding people for a job well done, adding some training and reducing isolation, directing naloxone to high mortality Census tracts, spending time building trust, etc. would generate an enormous return on investment — both financially and in lives saved. 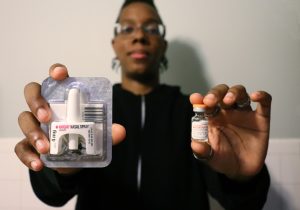 Harm Reduction Ohio employs just 5 full-time equivalents and just three of those handle distributing 30,000 to 40,000 naloxone kits a year (online, in-person and through lay distributors). It is a heroic effort by heroic people. But the relentless volume is burying our staff under work and stress. And we’re not alone. Other Project DAWN programs are feeling the same stress.

Too many people are dying to slow down or complain: 5,174 overdose deaths last year, another Ohio record. But now is the time to step back and think and optimize and rationalize naloxone distribution in Ohio.

These naloxone price cuts will save Ohio at least $3 million annually and likely much more. This money needs to be reinvested in our state’s rickety overdose prevention infrastructure that today operates a shoestring and with volunteer labor fueled by the passion of everyday people who’ve lost loved ones to overdose. 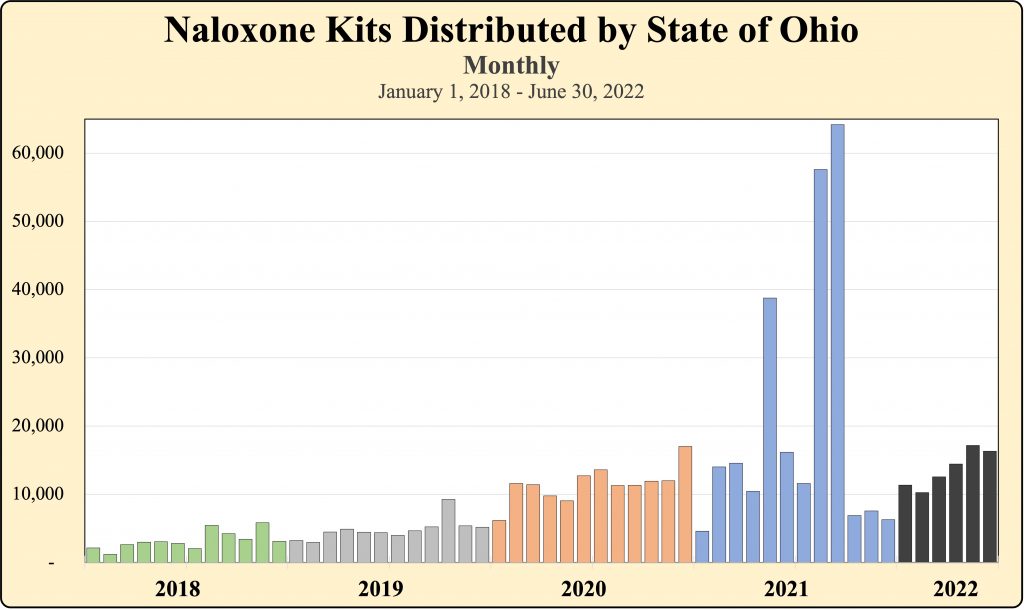 Naloxone distribution has grown explosively in Ohio, from 38,756 kits provided by the state pharmacy in 2018 to 252,631 in 2021. The entire state should applaud itself for this growth. It chokes me up just reading those numbers and thinking of the tens of thousands of lives that have been saved.

If we do the right things, naloxone price cuts won’t just save money; they will save lives. They will let us target naloxone distribution in a way not possible now when just “getting it out the door” consumes nearly all our capacity. We owe it to ourselves, as Ohioans, to do an even better job getting naloxone into the nose of the next person about to die in this horrific overdose epidemic. With naloxone distribution, the last 10 feet are the hardest. That’s where we need to improve.

The state pharmacy, part of the Ohio Department of Mental Health and Addiction Services, is the state’s major provider of naloxone. It provides naloxone to health departments, prisons, Project DAWN programs and others. It does a great job, given the natural constraints of being government.

Most (but not all) naloxone is bought with federal funds provided to Ohio to prevent overdose death. Ohio gets extra money because of our high overdose death rate.