Where are overdose death rates worst in Ohio? 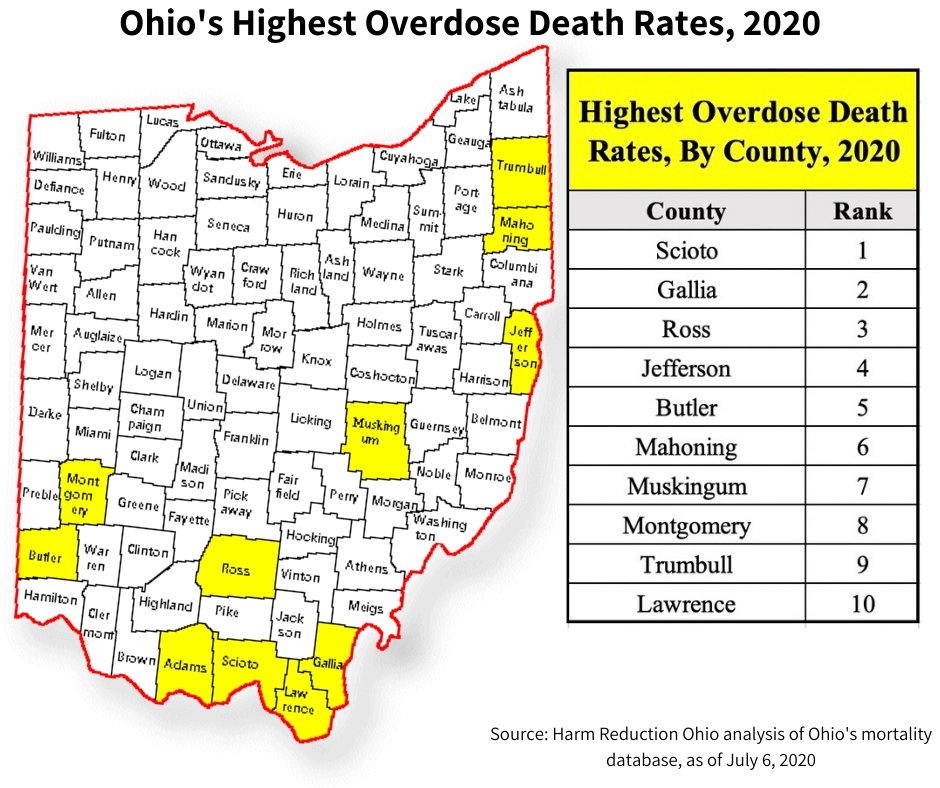 A lot of attention is paid to sudden overdose death surges in Ohio’s largest cities. This is a good thing but can be deceptive. Ohio’s heavily populated counties have large overdose death totals largely because they have large populations. However, their overdose death rates — the level of deaths after adjusting for population — are farther back in the pack of Ohio counties.

In other words, the tragic number of overdose deaths occurring in Ohio’s cities is largely a function of the fact that a lot of people live there rather than the intensity of their overdose problem.

Of the state’s biggest counties, only Montgomery (Dayton) and Lucas (Toledo) counties ranked among the top 10 counties in overdose death rates in any year since 2015. Montgomery County has ranked in the Top 10 consistently and, for reasons that are unclear, Lucas made its first appearance in 2019, ranking No. 4 after having ranked in the 20s and 30s during previous years.

What does this mean for Ohio overdose prevention policy?

It doesn’t mean we should ignore the problems in the “Three C’s” — Cleveland, Columbus, Cincinnati. Every death matters, and these big cities have a lot to teach the rest of Ohio in how to respond to overdose deaths.

The Three C’s have well-developed, if imperfect, overdose prevention programs that include:

These “big city” efforts attract a lot of well-deserved attention. But the attention misleads many to thinking these responses are more common in Ohio than they are. By focusing on what’s most visible, we have diverted focus from Ohio’s real overdose hotspots: mid-sized cities, small towns and rural areas where the overdose death is truly horrific and largely unchecked. 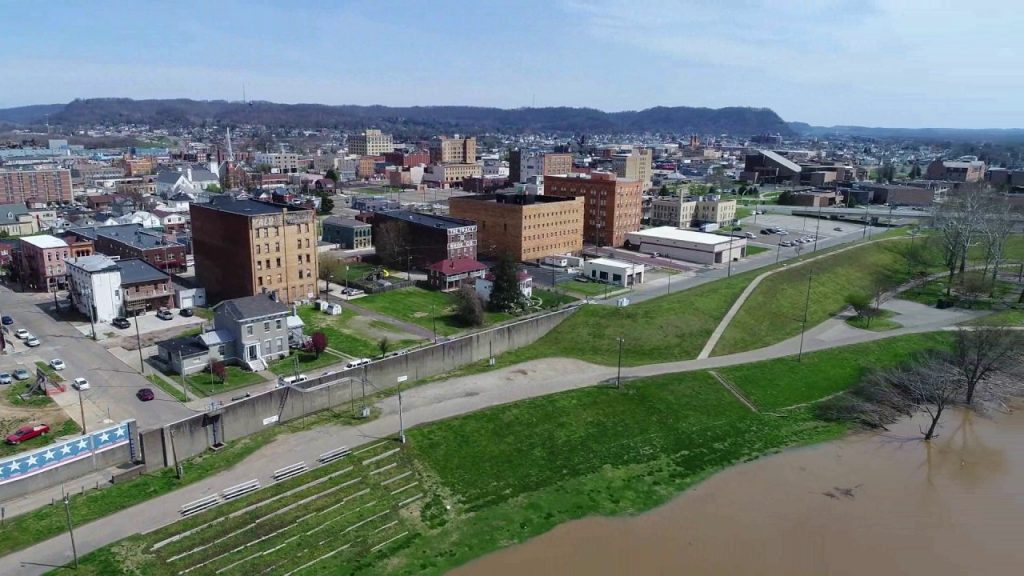 In 2019, the county’s overdose death rate was the highest recorded in any county ever in Ohio — and that’s saying something considering the historic slaughter of people who use drugs that occurred in 2016 and 2017 when carfentanil polluted a large share of Ohio’s drug supply.

By contrast, Franklin County’s overdose death rate (40.4) was one-third that of Scioto County’s.

Paying close attention to overdose death rates is crucial because many of Ohio’s hardest hit counties devote few resources to preventing overdose death. Sometimes money is tight because the counties are poor; sometimes political hostility and indifference to those who are dying is the biggest problem.

Ohio’s southern counties are suffering especially high overdose death rates today. In most of those counties, even well-meaning pubic health officials are given little support, financially or politically. Scioto County is a partial exception, but, even there, resources don’t match the size of the problem. 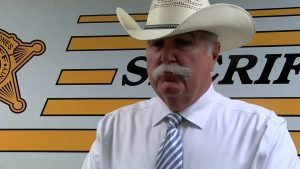 Butler County, north of Cincinnati, is one of Ohio’s more affluent counties and consistently ranks in the Top 10 for overdose death rates. (No. 5 so far in 2020.) But Sheriff Richard K. Jones is openly uncaring about people who die from drug overdoses and refuses to let deputies carry Narcan. The county’s biggest city, Middletown (pop. 49,000), is an example of where a dedicated effort is needed but limited by stigma and politics.

What to do: Think small (town)

In the big picture, Ohio needs to more accurately target overdose reduction resources where they are needed most.

This means more naloxone distribution to governments, private organizations and laypersons who can reach people who use drugs in high overdose areas. It also means more creative efforts, such as drug user health and harm reduction centers. These exist in other states but are not even on the radar in Ohio. And it means getting resources beyond the politically safe confines of Ohio’s big cities and spending more time, money and effort in places most Ohioans seldom hear about: Gallipolis, Waverly, Chillicothe, Ironton, Steubenville, Warren, Zanesville, and so on.

For our part, Harm Reduction Ohio (HRO) plans to increase naloxone distribution significantly in southern Ohio over the next year. This effort will be supported by two new grants: one from the Interact for Health foundation in Cincinnati and another from the Empowered Communities Initiative based at the Ohio State University.

Naloxone distribution is important, but it’s not enough. Knowledge matters most when seeking to make a difference statewide in Ohio.

HRO is working with Orman Hall at the Ohio Alliance for Innovation for Population Health at Ohio University to create zip code level overdose death data. This will eliminate some of the bias to big cities found in the current data. It will tell us where — at the zip code level –overdose death is most intense and harm reduction most needed. With this information, Cuyahoga County can be looked at as 64 neighborhoods (the number of zip codes in the county) rather than one large clump of 1.23 million people.

On the bright side, harm reduction has grown explosively in the last two years. In the first six months of this year, HRO has given out more than 9,000 naloxone kits and received reports of more than 400 overdose reversals. By comparison, two years ago, layperson naloxone distribution was essentially non-existent in Ohio. Local health departments are doing lots more naloxone distribution, too, and more accurately reaching the at-risk population.

Yet, despite improvements, overdose prevention efforts remain thin across this large state of 88 counties, 120 health districts, 600 school districts and 11.7 million people. To be blunt, we’re doing better than before, but we’re not doing well.

Overdose death has been at epidemic levels for nearly a decade and shows little sign of easing. In 2019, Ohio suffered nearly 4,000 deaths. This year appears on track to exceed that. We can’t let complacency set in so that about 4,000 dead Ohioans every year, year after year, seems like the new normal.

Ohio needs to take overdose prevention to the next level. We need to be smarter, more creative, more loving, more evidence-based and more attuned to the actual needs people who use drugs, especially in small towns and rural areas, and less attuned to the needs of police who want to criminalize people who use and sell drugs, thereby escalating drug prohibition, the fundamental cause of our overdose epidemic. 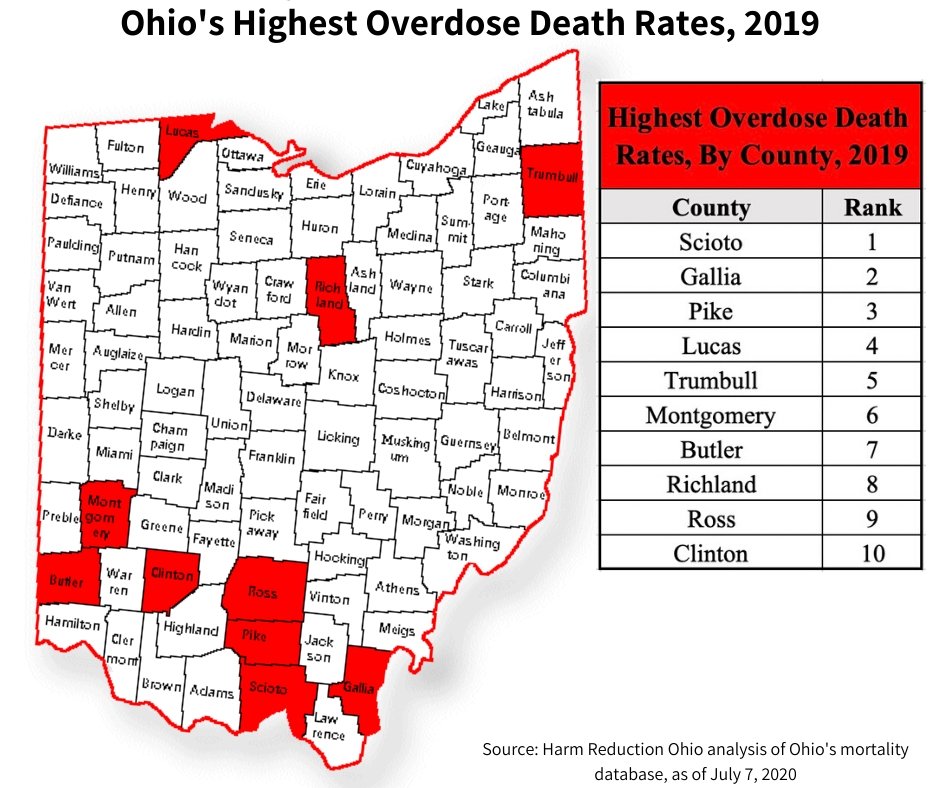 The 2019 overdose data is close to final: 3,957 overdose deaths statewide. (See red chart above.) The 2020 data is partial:1,455 deaths reported so far. (See yellow chart above.)  The data set will grow in size and precision as the year progresses.