Where is fentanyl added to cocaine? Mostly in Ohio. Result: 3,000 dead.

Yet, despite mass death, the cause of the cocaine-fentanyl phenomenon is a mystery. Fentanyl (an opiate) is not a natural, mass scale adulterant for cocaine (a stimulant).  So far, nobody has been able to figure out who is adding the fentanyl, why it’s being done, and where in the supply chain it’s occurring.

Harm Reduction Ohio conducted a new analysis that helps solve the mystery. The finding is heartbreaking for Ohio: fentanyl adulteration of the cocaine supply is occurring here, at the bottom of the supply chain, at the level of local dealers, street dealers and even users.

Put starkly, cocaine is coming into Ohio pure and unadulterated. The Colombians, Mexicans and others are providing uncontaminated  cocaine. The fentanyl (and too often ultra-potent carfentanil) is getting added in Ohio.

Fentanyl in cocaine: the study

Harm Reduction Ohio analyzed crime lab data from the Ohio Bureau of Criminal Investigation to determine at what point in the supply chain fentanyl appears in cocaine. BCI has four state crime labs that analyze drugs confiscated by law enforcement. In 2018, the crime labs examined 59,000 samples of suspected illegal drugs sent in by law enforcement agencies from across Ohio.

The good news is that cocaine-fentanyl combinations have decreased, and carfentanil-cocaine mixtures appear to have vanished entirely. However, fentanyl still remains dangerously common in powdered cocaine. Last year, 7.7% of cocaine seized by law enforcement had fentanyl in it.

BCI crime labs reported 5,479 submissions of cocaine confiscated in 2018. Of those, the BCI data reported the weight of the drug in 4,763 cases. HRO analyzed how frequently fentanyl was found in big seizures versus small seizures; that is how often fentanyl was found in bulk cocaine for wholesale distribution versus small cocaine packets intended for street sales and personal use.

The results were startling.

What we found: (Charts with data below.)

Bulk cocaine = pure cocaine. No large Ohio cocaine seizure tested by BCI in 2018 contained even a trace of fentanyl or a fentanyl analog. The 68 largest cocaine confiscations — those of 100 grams or more — accounted for 79% of the weight of tested cocaine but were entirely free of fentanyl. An eight kilo cocaine seizure (8,006 grams) in Delaware (north of Columbus) in December was only cocaine. Ditto a seven kilo seizure in Youngstown in May, and seven kilo bust in Whitehall, and so on.

Midsize cocaine sales = midsize fentanyl risks. The risk of fentanyl being in cocaine increased as the cocaine was divided into smaller parcels during the drug’s move down the supply chain. The largest cocaine-fentanyl seizure BCI reported in 2018 weighed a little less than one-tenth of a kilo (99 grams). A regional drug task force in Licking County (east of Columbus) found that. The next largest cocaine-fentanyl seizures were an 85-gram seizure in Marion in January 2018 and a 38-gram seizure in Chillicothe in September.

Small amounts = great fentanyl risk.  Fentanyl’s frequency was greatest when cocaine was confiscated in tiny packets of one gram or less. Fentanyl contamination increased as the amount decreased, as the amount of cocaine shrank to street dealer and user quantities. Fentanyl was most common — found 14.1% of the time — in the smallest seizures, those of less than one-tenth of a gram.

The data in two charts

The first chart shows the number and weight of cocaine seizures analyzed by BCI and the portion containing fentanyl or analog. 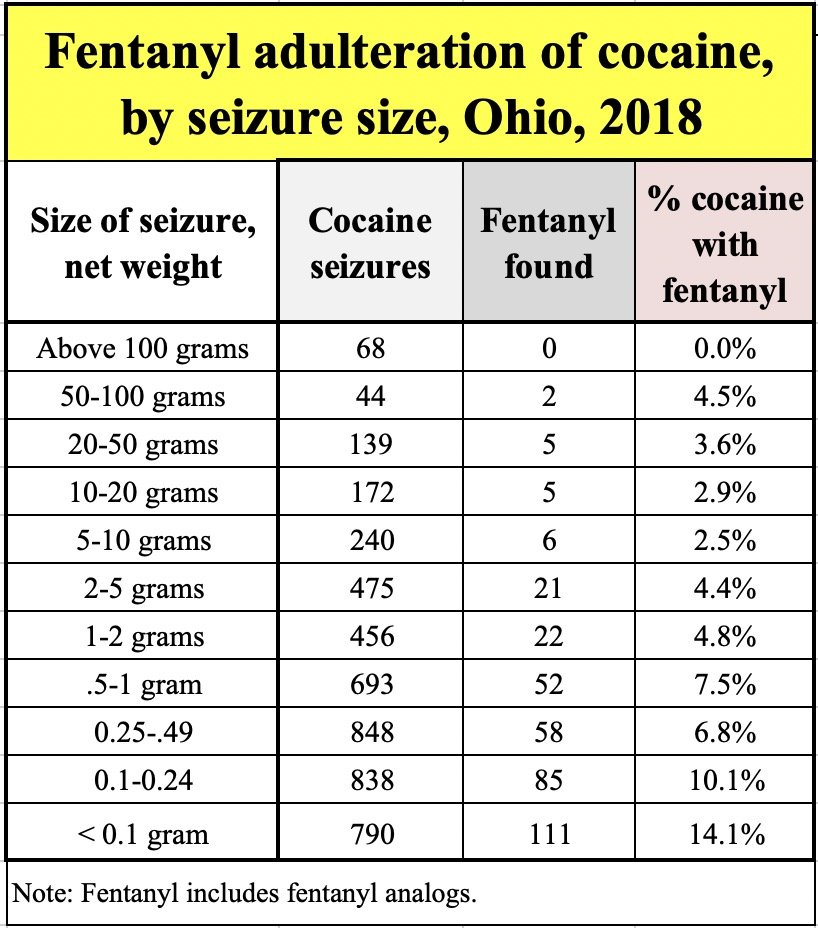 This chart shows the same information based on the total weight of the cocaine in each category. For example, the 68 largest seizures accounted for a total 54,909 grams (54.9 kilos) of cocaine, or 79% of the cocaine tested. 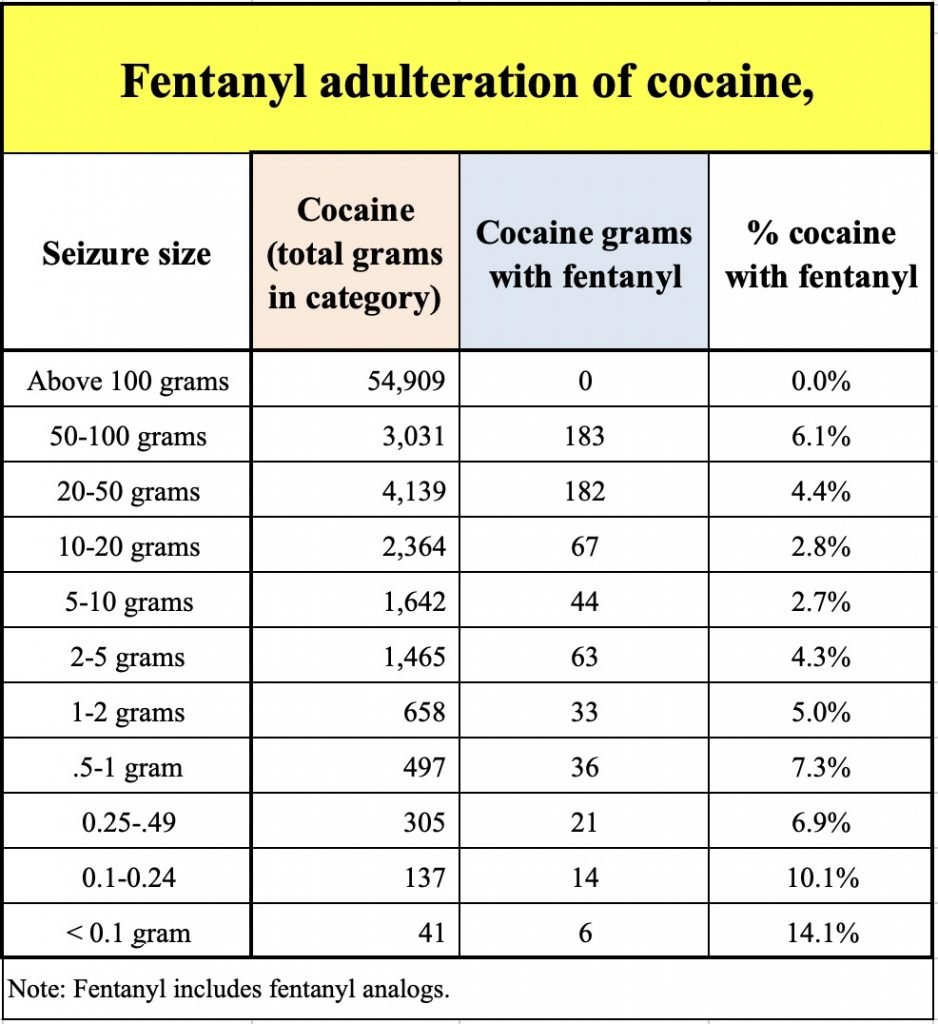 Why is fentanyl being added to cocaine?

Harm Reduction Ohio’s analysis rules out the “America is being poisoned” theory — the idea that large-scale fentanyl contamination is occurring at the production level (South America), at the wholesale/distribution level (Mexico) or in the imaginary boardrooms of drug cartels.

The evidence shows that cocaine is entering Ohio clean and, for some reason, fentanyl is getting into cocaine supply here, in our own state, in communities from Akron to Zanesville.

But why? And who’s doing it — dealers or users? Is it being done accidentally or on purpose?

The answers to these crucial questions remain a mystery. Two major theories exist on why fentanyl is getting in cocaine at the bottom of the supply chain.

Speedballs. Cocaine-opiate combinations (speedballs) have been around forever. Saturday Night Live star John Belushi died of a cocaine-heroin speedball in 1982. Some users like speedballs to create a balance between energy and sedation. But speedballs traditionally have been a small niche market.

Today, some users report that speedballs are more popular. Some users say they’re viewed as a safety precaution against opioid overdose, part of an (unsubstantiated) folk theory that adding a stimulant to heroin will offset the extreme and sometimes fatal respiratory depression that comes with synthetic opioids. “Cocaine keeps you awake if fentanyl puts you to sleep,” said one user.

However, most evidence points to a different cause of widespread cocaine-fentanyl overdose death. Most deaths appear to be cocaine users getting fentanyl unexpectedly, opioid users doing speedballs.Cocaine users, lacking opiate tolerance, are vulnerable to tiny small amounts of fentanyl. Cocaine users are less likely to have Narcan around when they use, and friends and family members are less likely to realize that it’s needed, that a cocaine user is dying of an opiate overdose.

Cocaine-fentanyl has racial implications. In 2017, for the first time in the overdose epidemic, African Americans died in numbers nearly equal to their share of Ohio’s population.

“Sloppy Dealer “Theory. Cocaine and heroin are often often sold by the same local dealers. People who sell drugs dilute (cut) what they  buy and sell to make their product last longer and to reduce potency.

Fentanyl and its analogs (especially carfentanil) require more care and skill when the drugs are cut (diluted). Few dealers understand how easy it is to contaminate their product if “heroin” and cocaine are cut on the same equipment and that “heroin” contains fentanyl, even in trace amounts.

For example, a local drug dealer might use a coffee grinder to mix baking soda, lactose or caffeine into heroin or cocaine. This is not a problem if only cocaine and heroin are involved. But fentanyl, carfentanil and other analogs are potent in ultra-small amounts, at the microgram level, in amounts barely visible.

This means all equipment must be cleaned and sanitized whenever a tool — be it a coffee grinder, table, bag, utensil, etc. — is used for more than one drug. Without a thorough cleaning, lethal opioid doses will remain as residue and contaminate cocaine (or meth) without anyone realizing it. What’s needed is restaurant- or hospital-style cleanliness. Since everything is a powder, equipment should be cleaned outdoors with an air blow gun by a worker wearing a protective face mask.

All these theories are likely true to some extent. It’s unclear which is the primary cause of so much cocaine-fentanyl death in Ohio.