Overdose death rates among women, both White and Black, is similar and a fraction of the make death rate 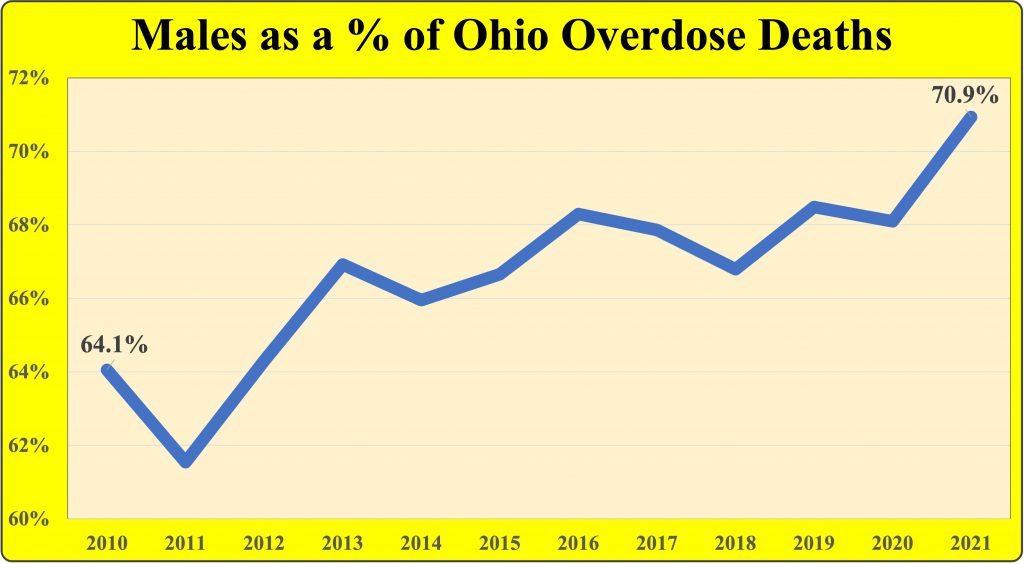 Men account for an increasingly large share of Ohio residents dying from overdose deaths. So far this year, 70.9% of reported overdose deaths have been male. That’s the highest percentage since at least 2007 (when the current mortality data starts) and perhaps ever.
An increase in overdose deaths among Black males is the biggest driver of this change. Black males make up 6.8% of Ohio’s population but accounted for 12.6% of the 1,844 overdose deaths recorded so far in 2021 in the Ohio Department of Health mortality data. White males account for 40.7% of Ohio residents and 57.2% of overdose deaths so far in 2021.
Females, both Black and White, have about the same overdose death rates in Ohio, a fraction of those suffered by men.
As recently as 2018, the overdose death rate among Black males was lower than among White males. The expansion of fentanyl and fentanyl analogs in the supply or powder cocaine and crack cocaine is the primary driver of increased overdose death among Black males in recent years, especially in Ohio’s cities. Fentanyl in meth and the intentional use of opioids to regulate the effects of meth is the primary driver of increased overdose death among White males, especially in rural areas.
A key reason for the failure of overdose prevention in Ohio is a failure of the state to understand the nuances and cultural differences among various geographic areas and demographic groups. We cannot succeed when we operate under the illusion that overdose death today is a function of prescription drugs and heroin. The drug war has caused widespread adulteration of almost all illegal drugs, resulting in the catastrophic level of death we’re now experiencing.
Lesson we cannot ignore: Drug prohibition kills. Always has. Always will. Is doing so now, by the thousands.