All 88 counties shown below 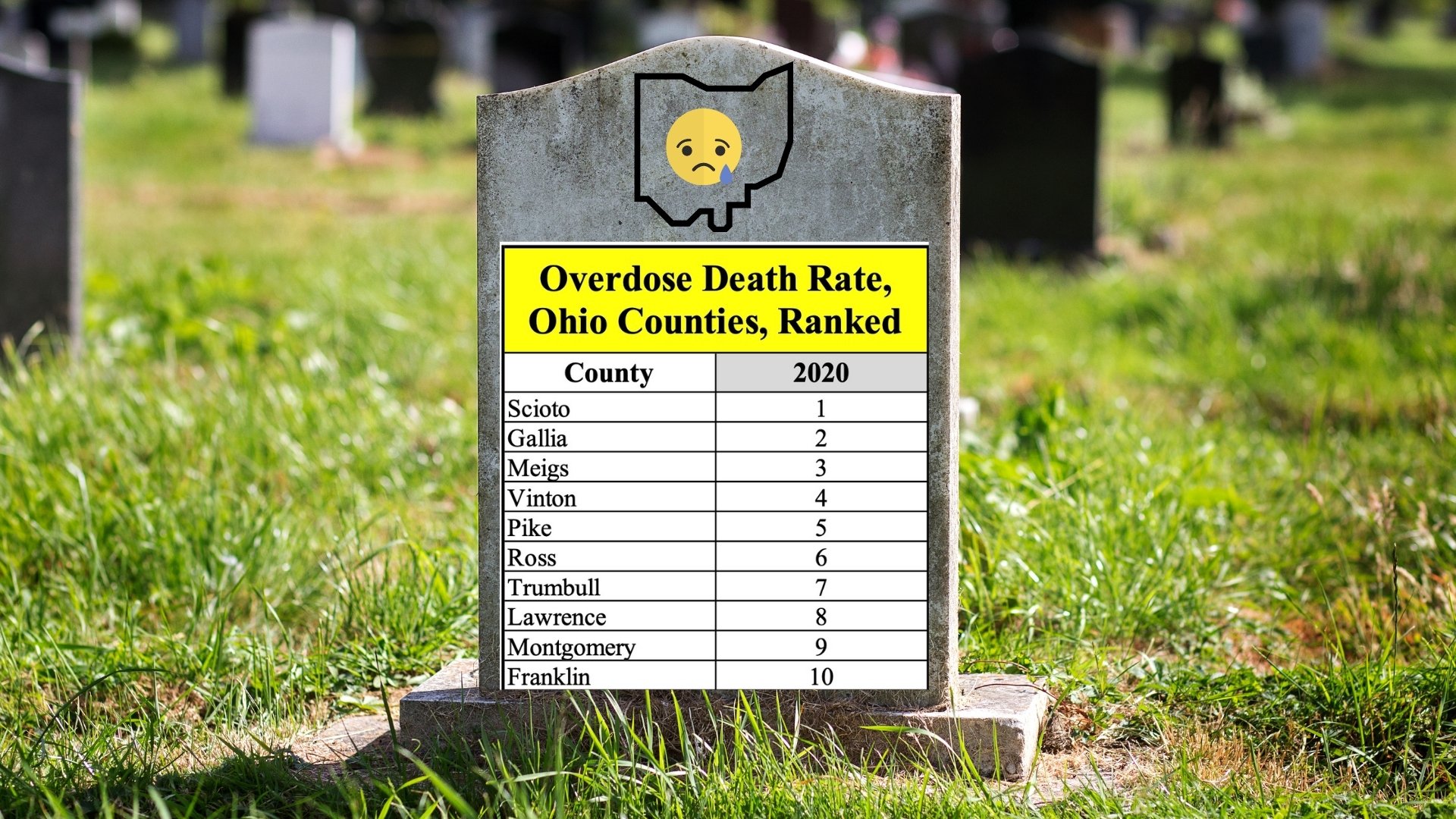 In fact, the six worst overdose death rates in 2020 were for southern and eastern counties: Scioto, Gallia, Meigs, Vinton. Pike and Ross. The high death levels in these counties reflect how overdose death has shifted geographically in Ohio since 2017 — toward the south and the east. 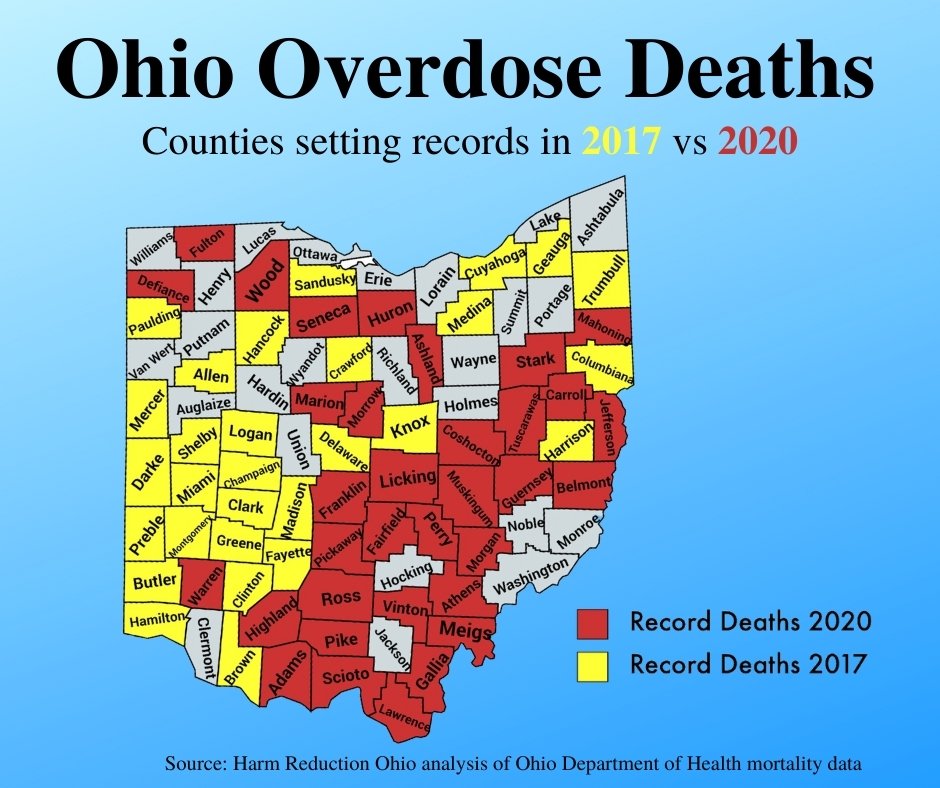 Franklin County is Ohio’s most populous county, 1.3 million people, or 11.3% of our state’s population. It’s also a county of haves and have-nots. When you examine overdose death by zip code — Ohio has about 1,300 — many of the deadliest overdose zip codes are in Franklin County (along with some large and affluent zip codes with extremely lower death rates).

In total, Franklin County has reported 734 confirmed overdose deaths in 2020, more than any county ever and a huge increase from 547 in 2019. No Ohio county had ever suffered 600 overdose before, much less 700 in one year.

Montgomery County (Dayton) still has exceptionally high overdose death rates, but the death rate has fallen from its historic peak of 98.0 deaths per 100,000 in 2017 when it attracted international attention as the “heroin capital of the United States.” In fact, we now know that heroin use wasn’t driving the county’s overdose death in 2017. The death surge was caused by a massive influx of ultra-potent and deadly carfentanil into the area’s drug supply, especially into cocaine.

This foreshadowed carfentanil’s role in driving overdose death statewide to record levels in 2017. Ohio had a carfentanil overdose death rate that was 20x higher than any other state. The content of the drug supply explains 90% of all changes in overdose death in Ohio. In recent years, the Dayton area drug supply has become relatively less adulterated compared to other parts of Ohio while other parts of Ohio have had increases in fentanyl-adulteration compared to the Dayton area.

The 29 counties with overdose death rates above the Ohio average are shown in the following chart. (The entire list, for all 88 counties, is available here.) 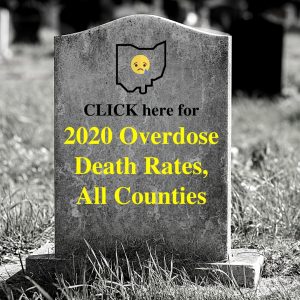 After this chart, a list is provided showing the 25 Ohio counties with the highest overdose death rates in 2020 versus what those  death levels were in 2015, 2016, 2017, 2018, 2019 and 2020. (Complete data can be downloaded here.) Note: the 2020 data is only 98% complete, so the overdose death rates will change slightly upward when the final data is available in September. The rankings should be the same.

And here are the overdose death rankings for each county from 2015 through 2020. 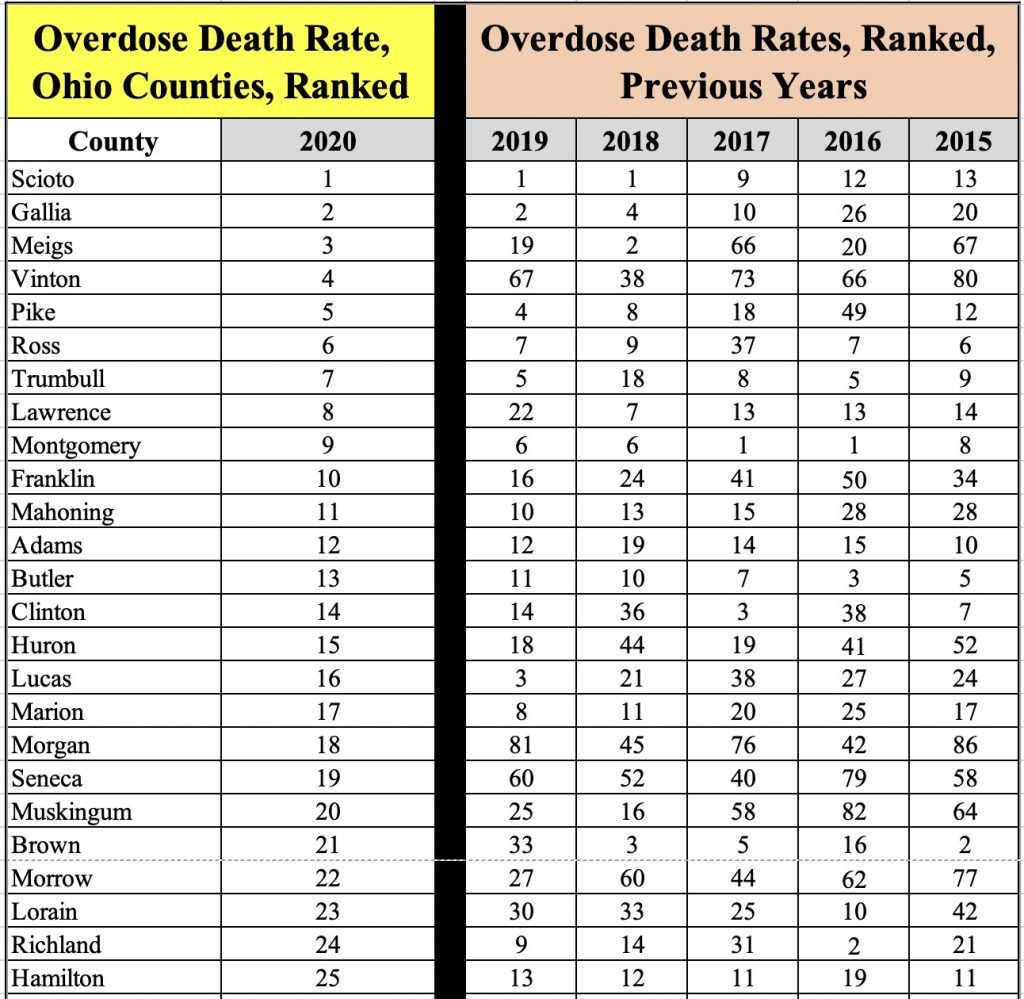